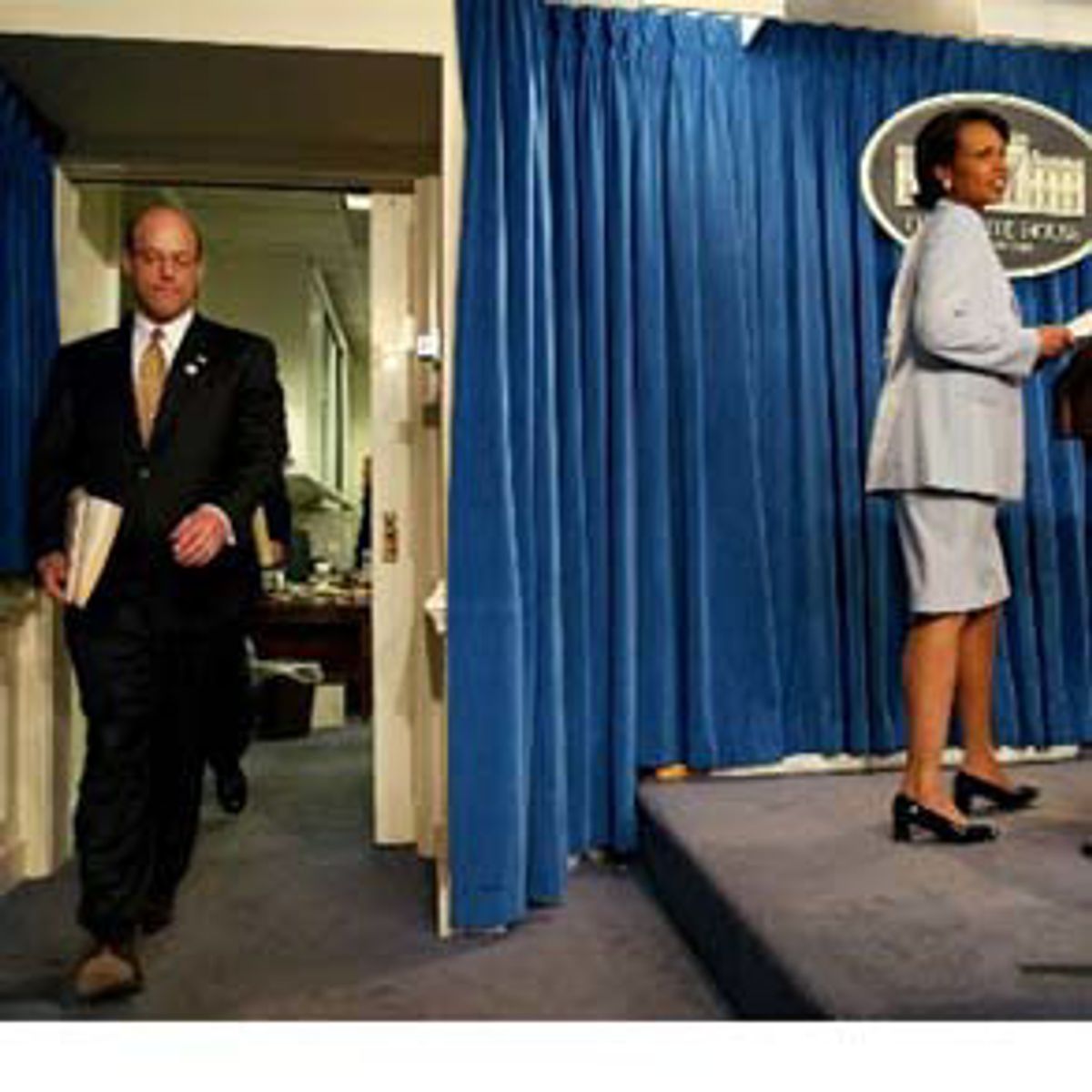 Now that it's been revealed that the CIA warned President Bush last August about an Osama bin Laden hijacking plot, the world is asking exactly what Bush knew and when he knew about it. It's also worth looking at what White House officials lied about and when they lied about it -- or at least when and how they wildly spun the truth over the last eight months.

Clearly, spokesman Ari Fleischer was not telling the whole truth when he said the White House had "no warning" of the Sept. 11 plot (though it's possible Fleischer hadn't been briefed on the CIA warning). On Thursday, Fleischer and National Security Advisor Condoleezza Rice defended their failure to come clean about the August al-Qaida threat by insisting they had only been told about a "traditional" hijacking plot -- implying that no one could have imagined hijacked planes being used as weapons.

But that's not true, either. There have been at least two previous attempts by terrorists to use planes as bombs: One was in 1994, when a hijacked Air France flight was ambushed in Marseilles by a French anti-terrorism squad, and one was even earlier, in 1986, when Americans thwarted a similar plan to blow up a plane over Tel Aviv. And there have been other terrorist plots to use planes as weapons that were never carried out. The 1993 World Trade Center bomber Ramzi Yousef, for instance, had a grand plan to hijack 11 American airplanes and blow them up over the Pacific Ocean.

Just last July, American and international security officials were on high alert for the G8 meeting in Genoa, following reports that al-Qaida was plotting a strike against President Bush. "Surface-to-air missiles, fighter jets and naval ships form part of the security operation," CNN reported, while the British Guardian said the measures were designed to repel "an aerial-led attack," which intelligence had warned about.

But the spinning and prevaricating have not been limited to Bush minions. The president himself has denied foreknowledge of the Sept. 11 attack. In January he told Tom Brokaw, "It's hard to envision a plot so devious as the one that they pulled off on 9/11. Never did we realize that the enemy was so well-organized." It was a smart strategy -- after all, how many people would suspect Bush of knowing more about the world than he claimed to? But it was misleading.

Vice President Cheney -- credited with having more knowledge of world affairs than the president -- has also played dumb since Sept. 11. On the Sept. 16 "Meet the Press," he said the administration knew al-Qaida had planned a "big operation," but he insisted there had been "no specific threat involving really a domestic operation." Again, not true.

It's still unclear whether the president knew anything about the FBI's chilling al-Qaida warnings last summer -- a Phoenix agent's alarm that bin Laden might be behind a spate of Middle Eastern men enrolling in American flight schools, or a Minnesota agent's concern that the so-called 20th hijacker, Zacarias Moussaoui, "could fly something into the World Trade Center." In her Thursday briefing, a nervous Condoleezza Rice promised she'd get to the bottom of whether such warnings had crossed her desk, or the president's, anytime before Sept. 11. It's worth noting that Rice did not flatly deny that she or Bush had knowledge of the FBI's alerts.

What is clear is that the administration tried to use its alleged ignorance about Sept. 11 as a pretext to unfetter the intelligence agencies -- as well as to pin blame for the attack on those agencies, especially the CIA. Just a month ago the Economist quoted a Bush advisor saying, "It is not as if there were not enough clues to be picked up for our $30 billion a year." Another advisor "furiously" added, "The White House has discovered more about madrassas in the papers during the past three months than we got from the intelligence system in the previous six years."

Of course, some shrewd commentators had realized earlier that the problem probably wasn't mainly one of hamstrung spooks. As Fareed Zakaria wrote in Newsweek last January, "No one has much of an appetite for an investigation. The reason for this might well be that Sept. 11 happened not because of intelligence failures but, even worse, because of policy failures. The former can easily be blamed on others. The latter requires that everyone -- both parties, both branches of government -- take a long, hard look in the mirror."

Meanwhile, Ari Fleischer may have to look in the mirror and take back his nasty slur against Georgia Rep. Cynthia McKinney, who suggested the Bush administration had known of impending terrorist plans before Sept. 11. "All I can tell you is the congresswoman must be running for the hall of fame of the Grassy Knoll Society," Fleischer said April 13. The shoot-from-the-lip McKinney probably exaggerated what Bush had known -- there's no evidence he was warned about the specific plots against the World Trade Center and Pentagon and let them happen. But in light of what's come out in the past 24 hours, Fleischer might have been advised to use a little more restraint when denying that the president had any foreknowledge of 9/11.