In "Unfaithful," Diane Lane's character was simply not unhappy or desperate enough to betray her marriage by having sudden sex with another man. 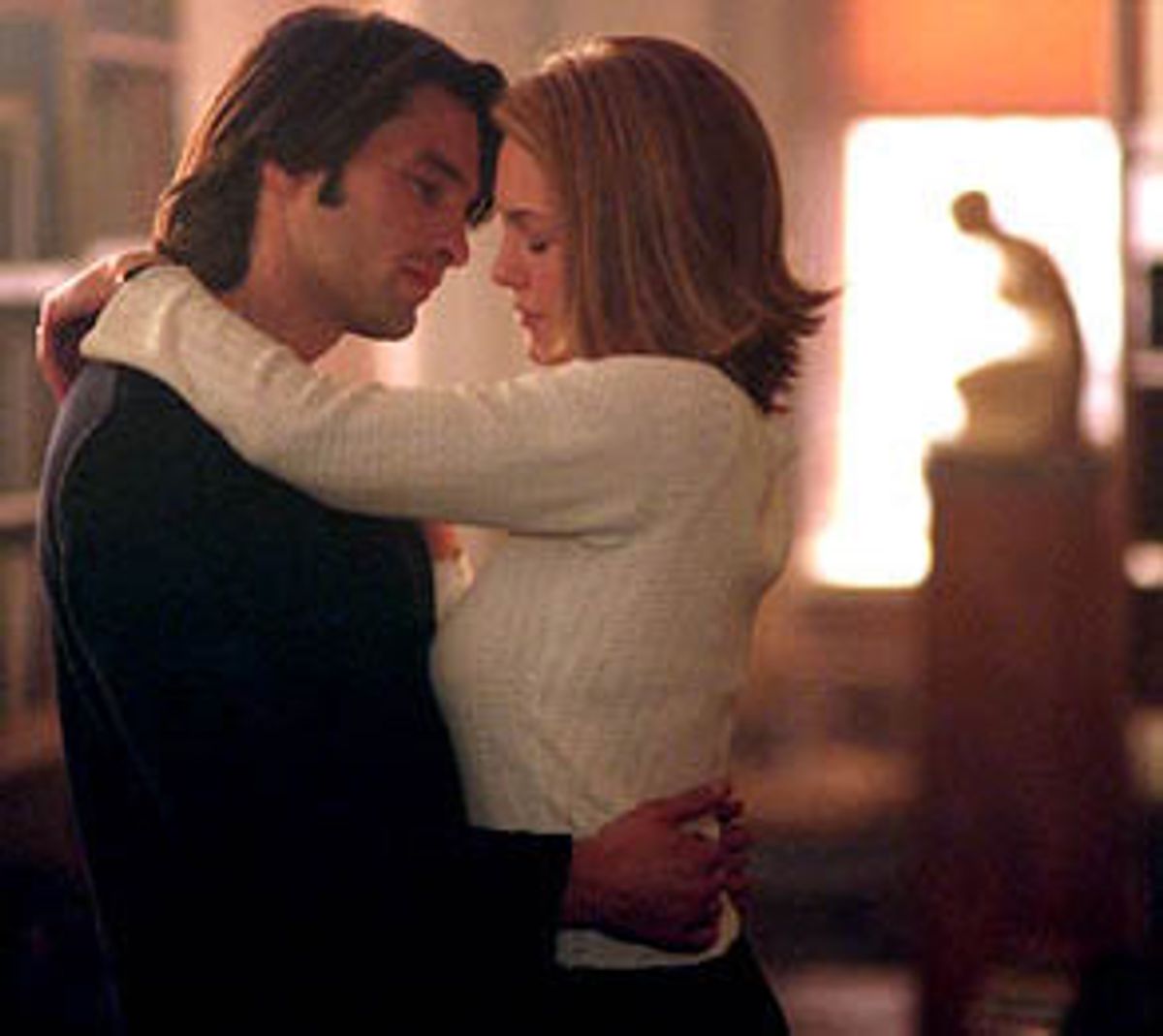 No column of this kind can fail to take note of Adrian Lyne's new film, "Unfaithful." The large audience with whom I saw the film seemed held by it all the way, and even understanding of its very open ending. But I find myself a little more troubled, even if I accept that it would be unfair to describe that ending in any detail. Indeed, the equivocation in the ending is just one of many things audiences are likely to go away arguing over. For if "Unfaithful" isn't exactly a date movie, it's ideal for married couples and likely to prompt a lot of talk.

Is it sexy? Is it a turn-on? Well, Diane Lane is a very beautiful woman -- all the more so, in my opinion, for being and looking 37. There's a shot of her, quite early on, struggling in the wind on a SoHo street, where the gale lifts up her skirt, and the hurried sight of her legs actually moved me more than the overtly sexual scenes, the lovemaking with Olivier Martinez.

Diane Lane is married to Richard Gere. They live in the country with their son (one of the kids from "Malcolm in the Middle"). They have been married a dozen years; they seem fond, intimate still, tender and kind. That is worth stressing because nowhere in the film is there any suggestion that the marriage is tired or stale, let alone unsatisfactory. I have seen an interview with Lane in which she said that she preferred a script with no obvious source of problem or unhappiness between the couple. She wanted her meeting with the young man in SoHo to be sudden, a helpless and passionate surrendering. Well, it is that, and it's well done in conventional erotic terms.

But I never believed it would happen that way. Why? Not because Martinez seemed too young or raw; not even because he wasn't her type. Though I did feel those things. More important, I felt that Lane's character was simply not ready or desperate enough to make the betrayal of sudden sex with another man. (We gather that she and Gere have been faithful throughout their marriage.) On the other hand, I did feel that this woman -- grown accustomed to the increasing, albeit fond and settled, silence of her marriage -- wanted someone to talk to. I think many people in "happy" marriages, or happy ones, too, reach that state. And the notion of friendships undertaken during marriage is intriguing. That too might be seen by a spouse as a subtle betrayal, enough to arouse jealousy.

But it might not make a film that did $17 million on its opening weekend; Lane's body, and her determination to overcome shyness, do provide an undeniable level of sensation. But the more I thought about "Unfaithful," the more uncertain I became. Yes, ostensibly, it's an adult, serious picture, about relationships, feelings and sexuality. All very well, so far. But there are implausibilities -- whether Lane would go that crazy for this guy. Whether ... well I don't want to spell out later things because they are part of an intricate narrative unfolding, one that may be both elegant and unpersuasive.

You see, in movies, people get wild, naked and dangerous for us (and it helps so much if they have Lane's raw materials). But that's because movie stories contain a kind of provocation that plays upon our greater caution, staidness or dullness in life. And we should not necessarily despise those things in ourselves just because movie stars fling off their clothes.

What I'm getting at is a kind of spuriousness in films like this that offer us danger but then wrap us in safety. And as I watched "Unfaithful" I was reminded of "Fatal Attraction" (1987) -- also directed by Adrian Lyne. In "Fatal Attraction," Michael Douglas and Anne Archer have a child and a happy marriage. But when the family goes away for the weekend, and Douglas meets Glenn Close, he does not -- cannot -- resist a fling. He tells Close he's happily married. She wonders why he's there with her then -- a good question, never answered.

For "Fatal Attraction" shared Diane Lane's wanting to know nothing about motive or explanation. That may spur or arouse an actress -- and Lane is often brilliant in her role. But it's not true to life. Unfaithful people act as they do out of profound discontent or out of their own perilous irresponsibility. There may be other reasons. But there are reasons. There have to be to overcome guilt, and even reason. And actually Lane's best scenes are those where the confusion of her pleasure and her shame are overwhelming.

What Adrian Lyne does is give us our cake and let us eat it. So his films offer all the vicarious thrill of adultery without the pain and damage of real separation. His couples come back together. In "Fatal Attraction," they kill the outsider -- treated by the movie as a madwoman, and a danger that must be stopped, but more interesting I think if seen as someone who is just overemotional. At the end of "Unfaithful" there is a vacancy because the film doesn't want to damn or doom its couple; it wants us to like them, and go away content. But in the real world of infidelity, that cannot happen. And on the screen a white lie is being passed off under cover of all that spectacular abandon.