Rascally Hugh Grant, a beyond-awkward little boy and the makers of "American Pie" team up for a near-perfect comic delight. 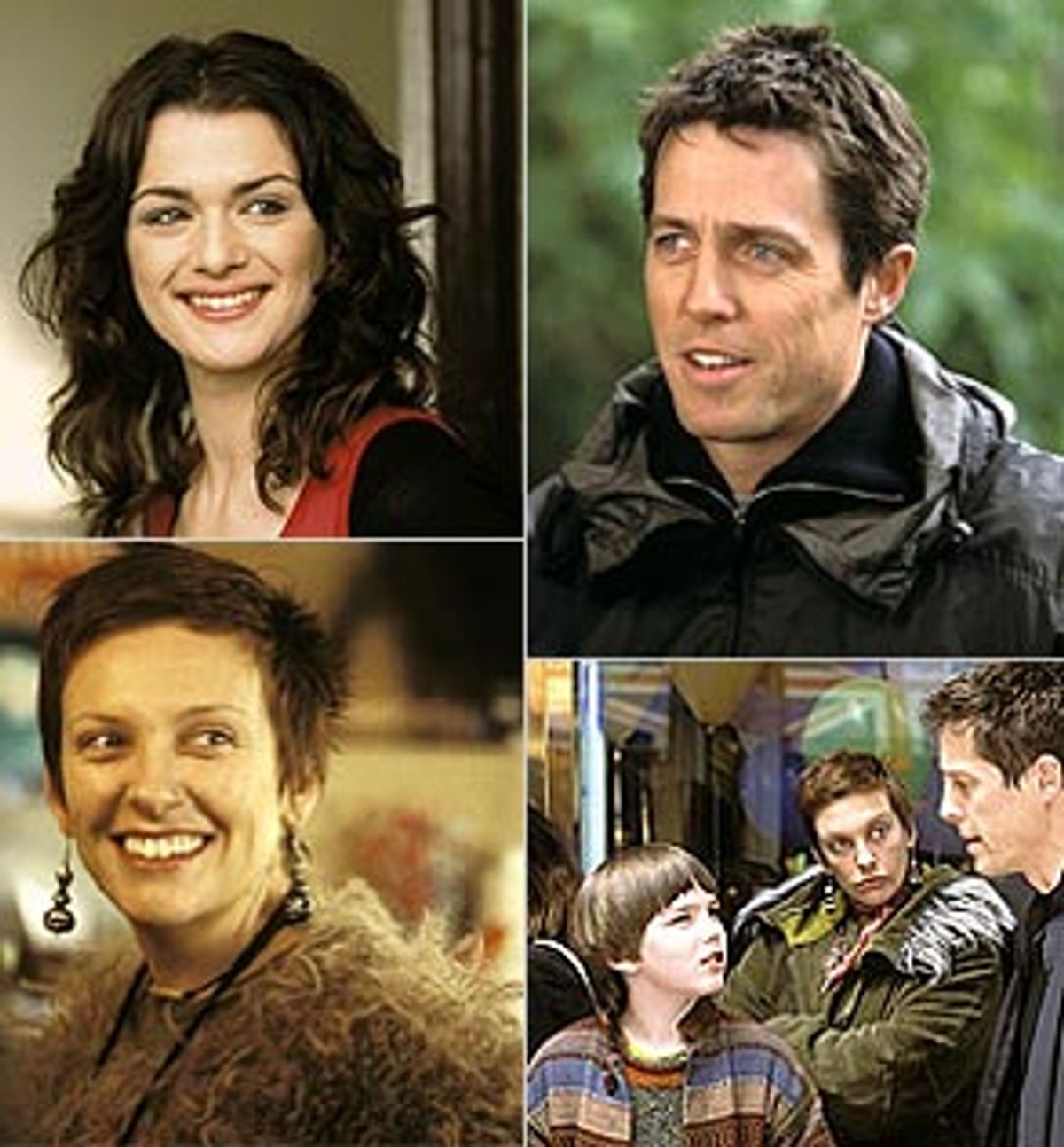 The loveliest movies are often the ones with a nasty kick -- pictures that don't gloss over human flaws and folly with a deadly coating of gloop, but instead sculpt them into high relief, so we can see exactly what we're getting in a character and make our decisions about him or her with open eyes. Jean Renoir was the master of that kind of filmmaking, and no contemporary director can touch him. But every once in a while, in the most unlikely places, you see his legacy carried out in a bright and original way. Every now and then a picture reminds you how easy and pleasurable it is to love mankind -- once you've come to terms with the fact that it's wholly wretched.

Love is all around in "About a Boy," but it's tucked into the nooks and crannies between wicked wisecracks, cruel-to-be-kind words and lots of eye-rolling. The movie doesn't so much envelop us in love as kick us in the butt with it, sending us on our way feeling awake and alive and a little bruised. Sometimes love hurts; other times it just smarts.

When you have to describe the plot of "About a Boy" in 25 words or less, you say it's about an immature lout who learns how to be a grown-up by befriending an odd little boy -- which is essentially true, although it makes the story (as told in both the movie and the Nick Hornby novel it's based on) sound much gloppier than it is, like "A Christmas Carol" crossed with "Peter Pan."

More specifically, "About a Boy" is about the way human beings trade information and observations and feelings with one another, and about how others can sometimes make you see your way toward being the person you didn't even know you wanted to be. It's also about the ways parents unwittingly cripple their own children with their love, even by doing something as seemingly small as making them wear a goofy sweater to school.

When parents tell their children (as they rightly should), "Individuality is wonderful! Embrace it!" it's sometimes their own individuality they're championing, after having firmly imprinted it on their kids. Without being churlish or mean, "About a Boy" shows us how hard it is for parents to grow up, too, suggesting that letting your child become his or her own person might be the final and most important (not to mention the most difficult) act of shedding your own childhood.

Hornby's novel is sweet, if slight, and eminently enjoyable as a pop-culture snapshot. It's also an honest rumination on the way material goods, as expressions of our own personal style, sometimes have a value far beyond their actual cost. But while Hornby's characters were sharply drawn, his story was diffuse and meandering. The movie, directed by the team that gave us "American Pie," Paul and Chris Weitz, captures the essence of Hornby's story and sharpens the edges: It's faster and funnier and sleeker than the book, and its distinctive stylization really makes Hornby's ideas gel.

The Weitzes' "About a Boy" moves along swiftly, swerving and curving around every obvious pothole; the directors take care of every detail without spelling out the obvious for us. For once, we're simply left to use our intelligence and wits as the story unfolds before us. That should be the rule, and not the exception, in mainstream movies, yet it has become increasingly rare. "About a Boy" is as close to mainstream perfection as I've seen all year. It gives us everything we want, need and deserve without batting an eye.

Hugh Grant plays Will, a spoiled arrested adolescent who doesn't have to work because his dad wrote a hit Christmas song years ago; the royalties keep rolling in as sure as December keeps rolling around. (When a prospective girlfriend asks him, with wide-eyed curiosity, if even door-to-door carolers need to pay for the privilege of singing "Santa's Super Sleigh," Will responds tartly, and at least half-seriously, "They should, actually, but you can't always catch up with the bastards.")

Will has a slick London apartment loaded with lots of cool toys, and nothing to do but fill his days with TV watching, pool playing and hunting around for women whom he'll date for a while and then unceremoniously dump. After a friend hooks him up with a recently divorced single mom, he realizes he's hit the jackpot: Single mothers are exceedingly grateful for every bit of attention shown them, which makes them much less demanding than your ordinary, garden-variety girlfriend.

To meet more of these spectacular creatures, Will invents a child for himself and attends a meeting of a local single-parents group called SPAT, for Single Parents Alone Together. That's how he eventually comes to meet 11-year-old Marcus (Nicholas Hoult), the shuffling, Peruvian-knit-sweater-wearing child of a perennially depressed arrested hippie and music therapist, Fiona (Toni Collette).

To call Marcus an awkward kid is an understatement: At school, even the little Pakistani computer nerds, the lowest fishies in the schoolyard pond, inform him solemnly that he can't hang out with them anymore. We know the kid's really in trouble when we see his mother, her ethnic earrings dangling cheerfully in cruel contrast with her dour, tear-stained face, sprinkling the morning breakfast cereal into bowls: It's called Ancient Grains.

It takes forever for Will to warm up to Marcus, which is one of the great joys of "About a Boy": Any transformation that's going to stick can't be easy, so we relish the long, stretched-out moments in which Will finds dozens of ways to tell Marcus to buzz off. Their friendship isn't a sudden click; it's more of a gradual erosion, the sort of thing that eventually turns beach glass back into sand, with Marcus doing the grinding. The evolution of their friendship is charted cleverly in a montage that shows Marcus, day after day after day, ringing Will's doorbell after school and plopping himself down on the couch, despite Will's obvious protestations, as if it were the world's most eminently reasonable act.

Marcus isn't immediately lovable: He's as weird and annoying to us as he is to Will, with his assertively all-wrong clothes and his tendency to blurt out the lyrics of soppy '70s songs at inappropriate times. But as Marcus is written (the screen adaptation of Hornby's book is by Peter Hedges) and, even more important, as Hoult plays him, you can't help warming to him.

Marcus' walk, a kind of flat-footed shuffle in which his legs move independently from his rigid torso, at first represents everything about him that's closed off and fearful: By the movie's end, you see it as something different, a natural trait that somehow matches how open and funny and free this kid is. Hoult, with his devilishly unkempt eyebrows and cherubically too-red lips, plays one of those pre-teens who still looks too much like his mother's little boy, and your heart goes out to him -- Hoult doesn't try to grab it from you, as so many child actors do.

Collette, as Fiona, has an even tougher job: Here in the early 2000s, we all recognize that it's perfectly acceptable to laugh at hippies who just can't let go of their security ponchos. Collette actually invites us to; indeed, how can we avoid it, when Fiona shows up for a lunch date with Will in a hairy monstrosity of a sweater that Will later characterizes as a "Yeti costume"?

But Collette also pulls off the more difficult feat of making us feel something for her every step of the way. Fiona is suicidal, but even though we're aware of her pain, we also see how much it hurts Marcus. ("I feel better now," she says simply, beaming calmly at him after she returns from a stay at a mental hospital, as if his loneliness and confusion were mere accessories to her own smoothed-over feelings.) Collette forces us to acknowledge both Fiona's suffering and her selfishness, a tricky line to walk.

She bounces brilliantly off Grant's Will, whose annoyance with her boils into frustration and then full-blown rage, when he confronts her with the ways in which she's "made" Marcus so weird. "You daft fucking hippie!" he hurls at her, and the line is as funny as it is cruel and weirdly poignant. Grant, who used to hide far too coyly behind his public-schoolboy stammer and floppy forelock, has turned into a marvelously unself-conscious actor. He's best when he's playing a bit of a bastard: The evil glimmer in his eyes when he spied Renée Zellweger's giant granny underpants in "Bridget Jones's Diary" was one of the sexiest things I've seen at the movies in years.

Grant's also an incredibly game actor: He gives it the full throttle, in his inimitably understated way, when he explains to two of his sunshiney, new-parent friends that he can't possibly be their infant's godfather because he'll only be trying to put the make on her when she turns 18. It's a hilarious moment, but even more remarkable is the way Grant's resolute orneriness meshes with the person he becomes later in the movie.

When Will notices that Marcus is wearing the dorkiest shoes on planet Earth, he buys him cool new trainers -- Will is grimly determined that the shoes will be what helps this kid through the roughest years of his life, and in a roundabout way, he's right. Grant is wonderful here because he recognizes that a character can soften without turning into a marshmallow. He's also, I have to note, aging beautifully: He has never looked as handsome as he does here. Those few inklings of crow's feet are the best thing that could have happened to his impishly good-looking face.

Every performance in "About a Boy" moves naturally and beautifully in concert with the others. It's a movie that works on every level, starting at its very core. It's the movie the Weitzes were destined to make. They aren't known as subtle directors, although they should be: "American Pie," at first written off as a shallow teen gross-out comedy, has actually found an audience that sees its larger value; for one thing, no teen movie since "Fast Times at Ridgemont High" has shown so much sensitivity toward teenage girls in the face of boys' sexual cloddishness. The Weitzes' second feature, "Down to Earth," didn't resonate as clearly but was nonetheless wrongly overlooked: It's a sweet-natured and well-made entertainment.

But neither picture comes together as wholly as "About a Boy." Its apparent lightness is actually many-layered: The Weitzes are masters at playing two (or, more often, many) emotions off one another at once. When we see Fiona and Marcus gathered round their tinkly home piano, belting out a rousing and stupendously earnest rendition of "Killing Me Softly," we wince, just as Will does. Then, just as it does with Will, our vague amusement at the ridiculousness of it all transmutes into something like horror. And yet, even as we're howling with laughter at them, it's impossible to feel derision -- their belief in the power of this lousy song transcends its innate crappiness, and we see them, and the bond between them, as something inherently wonderful despite its corny trappings.

That's a pretty subtle thing for two directors, best known for a movie in which a teenager humps a piece of pastry, to pull off. But then, "About a Boy" is all about the process of becoming something that no one, least of all yourself, ever thought you could be. The Weitzes have topped themselves, and their movie is an invitation to us to tap the better parts of our nature, without resorting to cheap self-congratulation. The not-so-secret message of "About a Boy" is that people are bastards. And bastards are so much easier to love than saints.