The story of a young Jewish Nazi skinhead might be controversial, but others have looked at the subject with more insight. 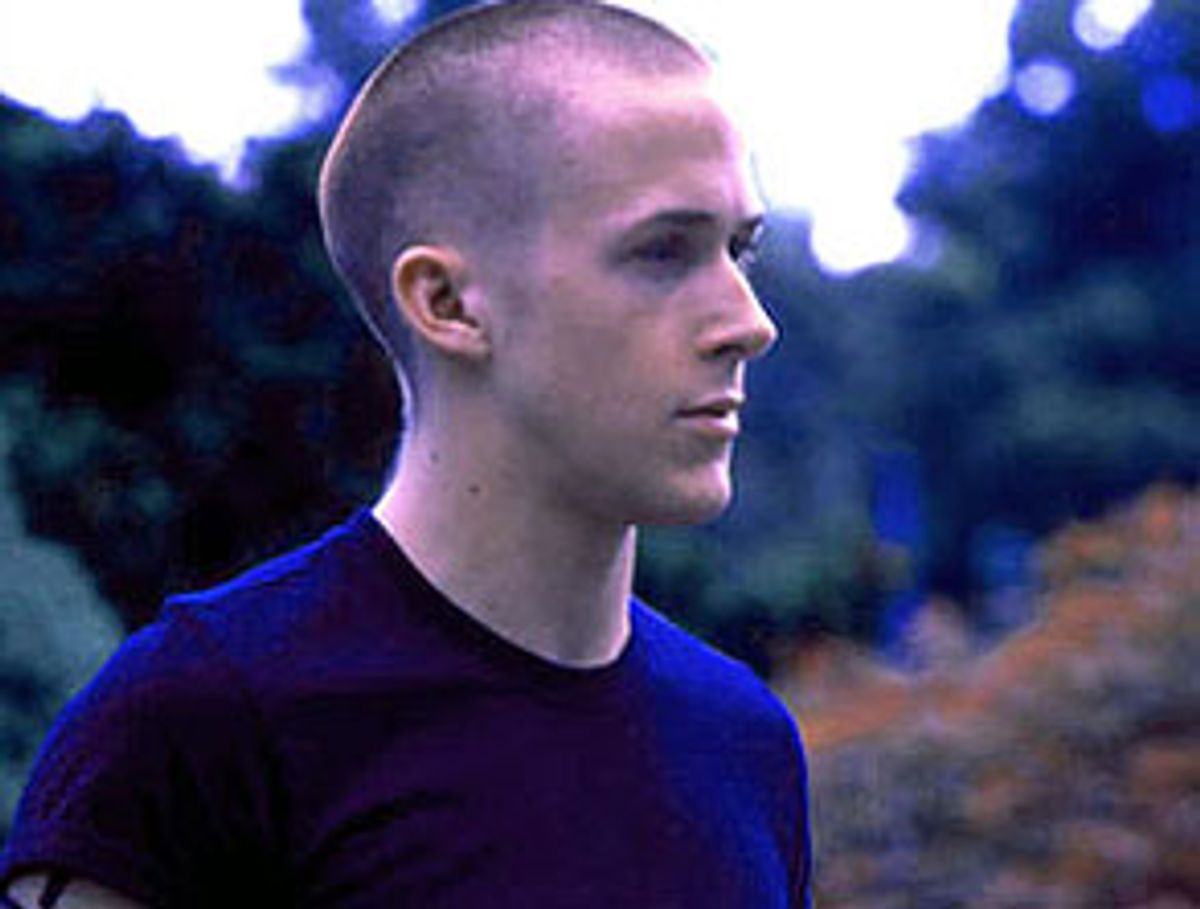 When a movie arouses the sort of controversy that opens it up to misinterpretation, and when that controversy prevents the movie from being shown, it's only natural for critics to come to the movie's defense. If you spend any time as a working critic you see good movies failing to find an audience while bad, heavily promoted movies open on thousands of screens and blot out everything else around them. And so defending a beleaguered film can lead to overstatement, to ignoring a movie's flaws in the passion of rushing to the barricades.

That, I think, is part of what has happened with the extraordinary critical praise for Henry Bean's "The Believer," finally opening in theaters a year after winning the Grand Jury Prize at last year's Sundance Film Festival, and a few months after airing on Showtime (increasingly, the home of independent movies that can't attract a distributor). "The Believer" is a bad movie -- really a terrible movie -- with a daring idea behind it. And it's had the sort of crummy luck that, no matter what you think of it, can get you steamed.

For the years that Bean dreamed of making the movie, he referred to it as "The Jewish Nazi," and that pretty much describes the film. It's the story of Daniel Balint (Ryan Gosling), a 22-year-old Jew who has become a Nazi skinhead. Bean and Mark Jacobson (who co-wrote the screen story) based the film on the true story of Daniel Burros, a member of the American Nazi Party and then the Ku Klux Klan who killed himself in 1965 after the New York Times revealed that he was Jewish. After the movie won at Sundance, Bean screened the film for Rabbi Abraham Cooper, the assistant dean of the Simon Wiesenthal Center. Cooper announced that he didn't like the film, and Bean found himself unable to find a distributor for one of the most praised recent American independent films.

Cooper's reaction is a piece of comedy in a league with the experience of the young writer in Philip Roth's 1979 novel, "The Ghost Writer," whose first story prompts a judge to write him a letter asking, "Can you honestly say that there is anything in your short story that would not warm the heart of a Julius Streicher or a Joseph Goebbels?" Roth's point is that writers (or filmmakers) can't write honestly if they make their aims the same as those of special-interest groups, who are, of course, not interested in the contradictions of human experience but in propaganda. There was no way that Rabbi Cooper was going to applaud the ambivalence of "The Believer." Why even screen it for him? Despite the fact that it's customary practice to show movies for the religious or political or social groups who might have a special interest in them -- a practice that seems to me always a bad idea; ideologues make lousy critics -- Bean's introduction to his published screenplay makes it clear that his own ego led to the screening. He was seeking praise for what he sees as his paean to Jewishness and even, owning up to grandiose delusion, a cure for prejudice.

But even if you take away the blinkers of special-interest groups and judge "The Believer" on sheer artistic terms, the movie still doesn't work. What Bean intends as ambivalence looks awfully confused -- perhaps because he's a careless, clumsy storyteller -- and what's left is simplistic. The movie introduces one idea before the credits are finished and continues to flog it for the next 98 minutes.

Over the credits we hear a yeshiva class where the young Danny Balint is told the story of Abraham, how God orders him to kill his son Isaac and he follows the instructions until God, satisfied with Abraham's obedience, spares Isaac's life. It's perhaps too easy a target. Along with the story of the prodigal son, it's the biblical tale most likely to backfire on the teller. (Hearing it for the first time in Sunday school class as a kid, I thought, This is loony. Why would anyone worship such a monster?) But it serves its pedagogic purpose. For Danny the story is a template of Jewish weakness, of the willingness of Jews to be victims. Later, when Danny hears a Holocaust survivor's tale of how a Nazi bayonetted his 3-year-old son in front of him, Danny berates the man, asking why he didn't fight back.

Bean's notion here is that Danny's Nazism is both Jewish self-hatred and the ultimate expression of his Jewishness. In his twisted mind, he's a storm trooper fighting G-d, out to eradicate everything that he thinks has allowed Jews to accede to their own destruction. It's a prickly idea, and Bean is quite right in that published introduction when he says that he originally envisioned the movie as a comedy. Hiding his Jewishness from the thugs he runs with, Danny can't help but reveal it. He taunts them that they know nothing about the enemy they hate. Even Goebbels, he tells them, studied the Torah. That simultaneous desire to conceal and reveal is at the heart of what's meant to be the movie's most touching scene. Danny and his gang vandalize a synagogue and he tries to prevent them from desecrating a Torah. He rescues the damaged scrolls, taking them to his apartment and lovingly repairing them.

Bean, though, is too satisfied with the idea to develop it. We see nothing of Danny's life between yeshiva class and his skinhead life 10 years later. Too many questions pop up. Why, for instance, didn't Danny simply become a militant Jew? Why didn't he run with Meir Kahane's crew instead of with skinheads? Why isn't he one of the extremist settlers on the West Bank? The movie is like one of those yeshiva lessons Danny left behind. It isn't dramatized as much as presented to us as an endless debate (that's the most Jewish thing about it). Bean sets himself up as a Hebrew scholar presenting a biblical mystery we are to parse in order to discover its intent and meaning. He flattens out the scenes, impedes any dramatic momentum, and apparently he doesn't see the stiffness of the actors reciting his even stiffer dialogue. After a while, watching the movie starts to feel as if you're reading a special issue of Commentary devoted to Jewish self-hatred.

You don't get any answers from Ryan Gosling's performance. Yes, Danny is more articulate than the meatheads he surrounds himself with, and Gosling communicates Danny's restless intelligence. But Gosling wears the hard, set face of the racist skinhead. Even when he's trying to prevent his cohorts from desecrating that Torah, there isn't much tension visible in it, no palpable agony beneath the surface, no struggle to conceal, no reckless passion in dropping hints about his Jewishness. It's a one-note performance, and maybe the praise that has come Gosling's way is the same thing as the praise that attends better-known actors when they play a bastard, an assumption that all an actor has to do to prove his daring is to assume a supposedly dark role.

Monotonous as Gosling is, the movie really goes out of whack whenever Bean ventures beyond Danny. He gets involved with a fascist political group led by the strategist Curtis Zampf (Billy Zane, looking like a guy who's spent too much time in graduate school) and Zampf's lover, who has been given the hilariously Ian Fleming-ish name Lina Moebius (and played with housefrau hauteur by the reliably awful Theresa Russell). Zampf and Moebius (they sound like a vaudeville team nobody would ever pay to see) are trying to promote fascism as a serious and acceptable political idea whose time has come again. He sees Danny's racism as a hindrance to their cause; she thinks it can stoke the romance of fascism.

It's never clear, though, how Moebius and Zampf are going to achieve their aim of respectability if they use Danny, or how his wish to kill Jews is going to sit with the movie's shadowy cabal of fringe right-wingers financing them, and presumably desiring that same respectability. These sections of the movie play like some paranoid liberal fantasy of the powerful and nefarious meeting in oak-paneled rooms to bring about the Fourth Reich. The scenes' ludicrousness defuses any point Bean might be making about how certain aspects of fascism might be once again becoming attractive.

And I have no idea what Bean intends in the scenes with Summer Phoenix as Moebius' daughter, who becomes Danny's lover, or how we're supposed to read Phoenix's zonked-out performance. She sneaks him into her bedroom, supposedly so her mother won't know. But we don't hear how she explains the bruises she wears after telling Danny to slap her around as a prelude to sex. When this cuckoo bird starts setting up the sabbath dinner in Danny's room and urging him to join in, it's not just that the characters' motivations make no sense, it's that the movie has slipped into the baldest contrivance.

For all the self-important daring Bean flaunts in "The Believer," the subject of the divide in the Jewish consciousness has already been handled, more deeply and savagely, and far more comically, in Philip Roth's novel "Operation: Shylock," and in the Israel scenes of Roth's "The Counterlife." Roth's simultaneous embrace of Jewishness and disgust with what he sees as Jewish chauvinism and masochism have the feel of someone venturing into forbidden territory. "The Believer," on the other hand, feels like a movie made to be touted in op-ed pages. Bean certainly isn't guilty of the romance with anti-Semitism some of the nervous nellies who've spoken against the movie have accused him of. But he utterly fails to rouse our sympathy for his Jewish Nazi, or to give us an emotional stake in his fate. Who cares what happens to the kind of goon who's just going to mess up some yeshiva boy on the subway?