The company that launched a thousand rips may be dead, but the movement it launched continues to thrive -- and to make a mockery of the music industry's pathetic online offerings. 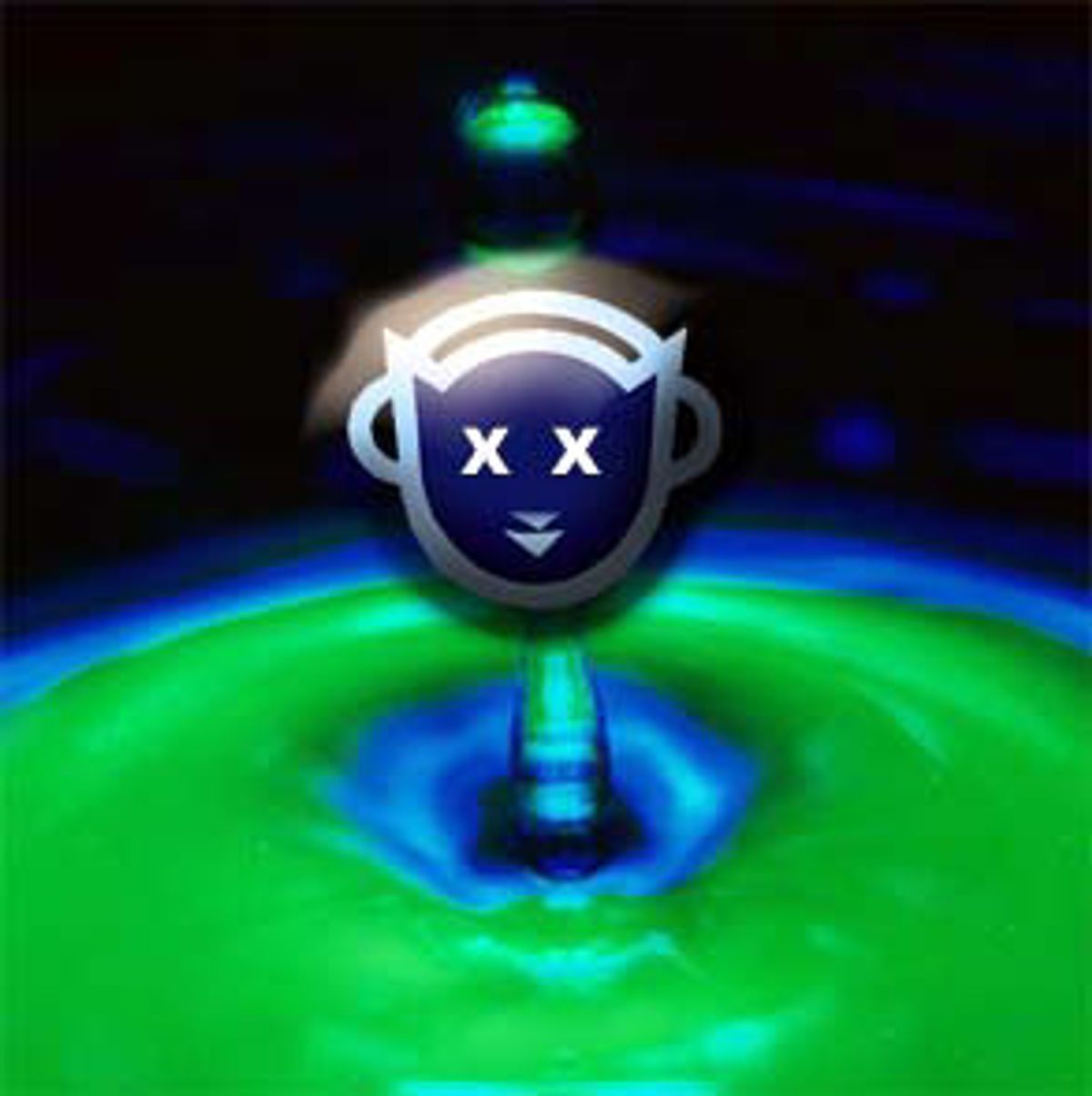 If there is anything really surprising about the implosion of Napster this week, it's that the company wasn't already dead. To most casual observers of the MP3 movement, Napster hadn't really existed since last July, anyway, when lawsuits forced it to shutter its doors and rethink its service.

Industry insiders still hoped that Napster would rise again, with a legal product that had the record industry's stamp of approval; and a dwindling staff stuck around for almost a year, tinkering with the beta version of software that the public never saw and to which the record industry obstinately refused to license its music. By the beginning of 2002, funding was running out and the end seemed imminent.

Bertelsmann, which had already invested $85 million in the company, offered to pick up Napster's pieces for $15 to $20 million, but a bickering board of directors -- John Fanning, the uncle of youthful Napster founder Shawn Fanning; and his nemeses, investor John Hummer and former CEO Hank Barry -- couldn't agree on the sale. On Tuesday, Shawn Fanning and CEO Konrad Hilbers resigned; and the company announced "substantial additional lay-offs." (On Friday, after this story was first published, Bertelsmann announced that it was acquiring the remnants of Napster for $8 million, and that Hilbers and Shawn Fanning would remain on board.)

The world shrugged. As far as the fickle MP3-lovers were concerned, Napster was history a long time ago: The party had ended and everyone had moved on to new venues. But what's been most telling about this last year, as the record industry declared victory and sent little Napster to its death, is just how little has really changed since the days of Napster's glory. Napster the company is all but gone, but Napster the paradigm is as strong as ever, and the record industry has yet to catch up.

It was a long and ignominious death-slide for such a revolutionary company. Despite the efforts of gadflies like Michael Robertson of MP3.com and rogue software companies like Hotline, there really was no MP3 movement until Napster. Napster was a simple piece of software, but its concept overturned all the traditions of the music industry: Suddenly, the game was being played by the rules of music lovers, rather than profit-hungry record companies. For the first time ever, music was unlimited in scope and quantity, free to sample and discover -- and, of course, to listen to. Best of all, it was available completely on demand.

It's no wonder that some 60 million users were merrily downloading away by February of 2001. And it's also no wonder that the Recording Industry Association of America made Napster its public enemy No. 1 just months after Napster launched in 1999. But Napster made the fatal mistake of being both arrogant enough to believe that a start-up could take down the record industry and blithely unconcerned about artists' piracy fears. Accordingly, the company made no friends in the courts; it was probably dead before its lawyers even gave their opening statements, although fans were hopeful that maybe the company had some tricks up its sleeve. It didn't.

When it lost its case, Napster was stuck trying to befriend and license music from the companies that it had just spent two years alienating. That was a long shot: The record-company executives were probably laughing up their sleeves as a dying Napster begged them to let it pay for music. Bertelsmann had bought in to the company, seeing an opportunity to wrest control of the file-sharing industry and get a leg up on rival labels, but the rest of the record labels had different plans.

Over the course of the last year, as Napster closed its free service and 60 million fans found themselves suddenly homeless, the record labels had plenty to say about their own plans to take over where Napster left off. Every day, the wires were full of announcements about industry-backed services like MusicNet and Pressplay and FullAudio, which would "legally license" their music to Net-based file-swapping services. The Secure Digital Music Initiative would wrap all that music in watermarked security systems that would ensure no one could take music they weren't allowed to have.

A year later, those programs have yet to take off. No one is releasing customer figures, but it's pretty easy to guess that they're not high. After all, when was the last time you visited a legal music-swapping service, paid a fee, and downloaded a Britney Spears tune that the software allowed you to listen to three times before it "expired"? Odds are, you never have.

Most people never have. The competing label-backed services have been disappointing, offering only limited music from the participating labels. (Listen.com's Rhapsody program is the only one that's managed to get music from four of the five major labels.) SDMI's promised security solution was vaporware; instead, these services offer silly rules that forbid listeners to burn their tunes to CD-Rs, or download them to their hard disk, or transfer them to MP3 players.

It's no surprise that no one is flocking to these systems yet. Meanwhile, Napster the Concept lives on. Free downloadable music is everywhere, and while subscription services like Rhapsody and Pressplay struggle to get going, free applications like KaZaA and Gnutella boast users in the millions. The most popular downloads on CNet are LimeWire and MacSatellite, iMesh, KaZaA and Morpheus. Most of these file-swapping software applications are distributed networks or offshore companies that have proved to be more elusive targets for the RIAA. Some, like KaZaA and Morpheus, are attempting to come up with profit models (often involving intrusive ads or customer-data collection) and better ways to license music and recompense artists. KaZaA has even enlisted Verizon in an ambitious scheme to reimburse musicians directly, using fees charged by ISPs.

So really, nothing's changed all that much, though Napster is still mourned. Often, you'll hear people sighing about the loss of Napster. "LimeWire just isn't the same," they'll say, and it's true: None of the new file-swapping systems that have emerged in Napster's wake can boast a user base close to Napster's at its peak, and the variety of music has suffered accordingly. It's still easy to find the latest Limp Bizkit, but no longer can you instantly find obscure indie bands with a click of the mouse.

The MP3 movement may have already had its day in the sun -- the revolution, with all its attendent celebrity, has ended -- but file-swapping still continues in a quieter sort of way. Will the record labels eventually catch up to reality and offer a reasonable product that customers won't resist? Or will the rogue file-swapping programs figure out some way to license music and reimburse the artists that are still losing in this equation?

Amazing, after almost three years, there is still no answer in sight. Even though Napster died in the battle, the war it started rages on.