Praise the Lord and pass the balance sheet 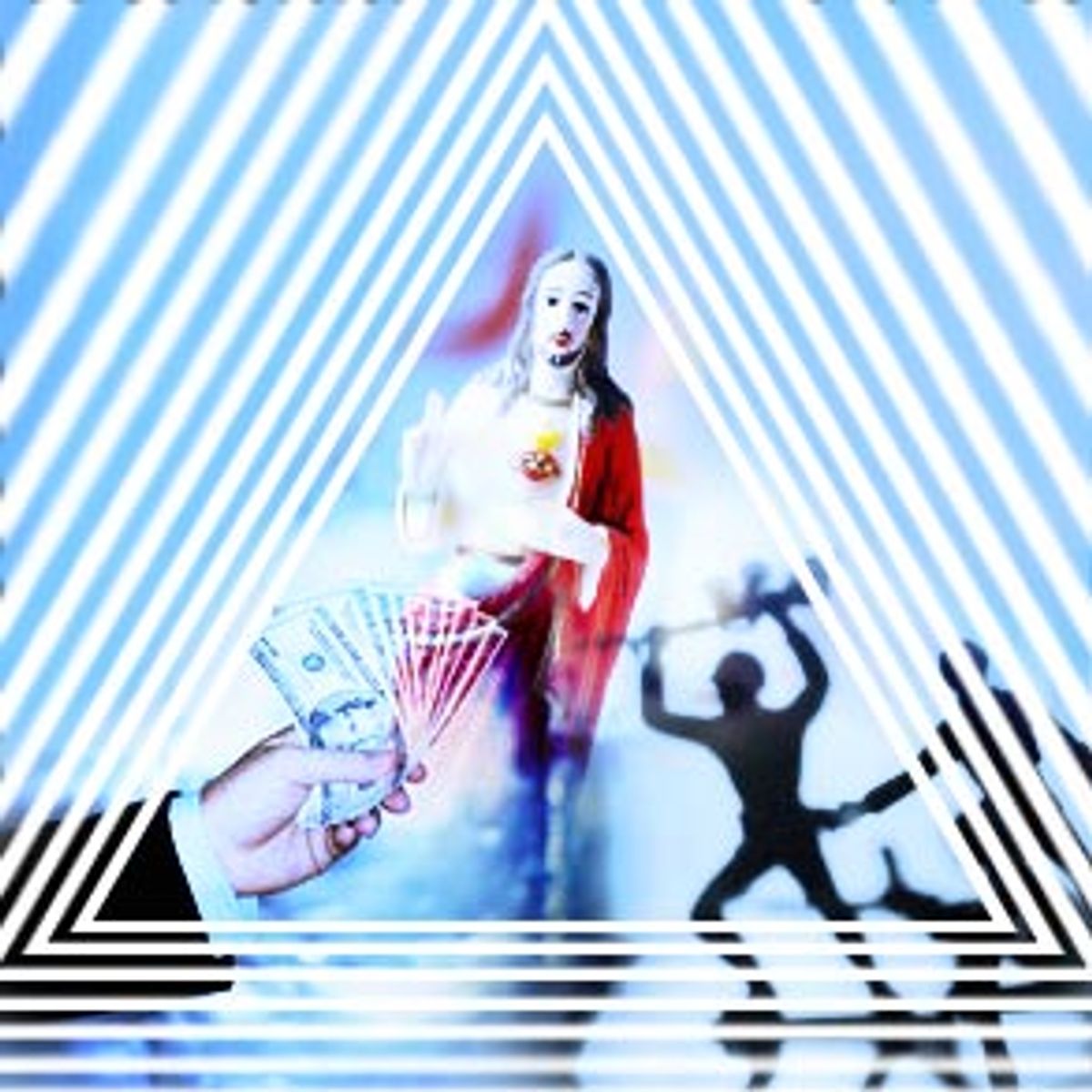 I work at a major chain bookstore, one of those faux Ivy League library numbers with gorgeous wood trim and floor-to-ceiling shelves stocked with 50 or so of the top ten bestsellers churned out by Patterson, Grisham and Clancy, and maybe one copy of everything else. In the front of the store stand the bestseller racks steeped with this week's populist fare: "The Prayer of Jabez," "Rich Dad, Poor Dad" and (for the time being) the latest Oprah title.

One of the things I like best about working there is that we get all types dropping in. Ours is a diverse customer base: soccer moms, elderly black church ladies, nuclear families, surly teenagers. First-year business students, bull-necked and noosed in power ties, demanding to know where to find "The Art of War" after their latest viewing of "Wall Street." Middle-aged hippies with braids and untamed beards browsing the alternative-health section. Yesterday I actually spotted one sporting a vintage Make Love, Not War T-shirt. But the one thing that this smorgasbord of humanity has in common is that they all want the newest books on war and finance.

Sept. 11 may have sparked a renaissance in learning about Islam and the Middle East, but the economic downturn has inspired an even greater rash of financial book buying at my place of employment. This war on terrorism, fought with a fever-pitch moral righteousness against "evildoers" and the like, has much in common with modern business strategy as espoused by today's bestsellers, which often blend scorched-earth war rhetoric with financial advice. Books like "Guerrilla Marketing" and "Warrior's Wisdom: The Combat Guide to Corporate Life" line the shelves and top the lists, each with its own brand of pseudo-philosophizing and fuzzy-headed tough-talk pronouncements.

The first and most tempting reaction to this literary conflation of war and business is to dismiss the whole scene as flabby white guys in suits vicariously playing soldier. The philosophical assumptions that gird the undercarriage of the "business is war" mentality are, however, more troubling.

This current preoccupation with money and worldly success is nothing new; Dale Carnegie's bestseller "How to Win Friends and Influence People" is still in print and selling well after 65 years. "Rich Dad, Poor Dad" is one of the fastest-selling financial books of recent years, spawning several sequels like "Rich Dad's Guide to Investing" and the curiously named "Rich Kid, Smart Kid." Suze Orman's "The Courage to Be Rich" is another.

But if being rich takes courage and the rich are inherently smart, is not the converse implied? Are the poor, then, necessarily dumb and cowardly? As Kurt Vonnegut once remarked, in our culture one of the cruelest things anyone can say to anyone else is, "If you're so smart, why aren't you rich?" This country has a long history of confusing wealth with intelligence, although the signs of sputtering intellectual horsepower coming from the White House ought to put that particular delusion to rest soon enough.

So if the money masters are courageous, smart, influential men with lots of friends, would it not stand to reason that they are also warrior-gods? There is in fact a version of "The Art of War" written specifically for management. This mentality has given rise to books like "The Genius of Robert E. Lee," which offers business advice to "the outgunned and outnumbered." Never mind that Lee was on the losing side of a hideous war fighting for the right to preserve an evil institution. Never mind that while making money is a necessity, most people would prefer to do so without raining the horrors of war down on their competitors.

These books are finding an audience. Perhaps there is a certain perverse glee in the hearts of middle managers who feel stifled by the conformist restrictions of corporate etiquette. Perhaps this business bloodlust is just the way their individuality expresses itself. There is, after all, "a time in every man's life when he gets the urge to spit on his hands, hoist the black flag, and begin slitting throats," to quote H.L. Mencken.

But the peculiar billion-legged beast known as 21st century capitalism appears to be at a crisis point, spirituality-wise. Not everyone goes for the jugular. A coequal trend in business books is the spiritual business book, embodied by titles like "The Corporate Shaman," by Richard C. Whiteley. These books may or may not be Christian-themed, although many are.

So on one hand you have "Machiavelli's Lessons for Managers," and on the other you have Laurie Beth Jones' "Jesus, Inc." I haven't read all of "Jesus, Inc.," but I've gotten far enough into it to know that the author is not advising us to do what Jesus would probably do, which is to liquidate the company holdings and give them all to the poor in Calcutta or some such place. Lord help us, at least the book doesn't provide a rationale for some Bible-thumping executive to gleefully announce to his shareholders, "God himself told me to lay off 10,000 people and move the whole operation down to Haiti!" What it does do is try to give business principles the same kind of mystical sheen that the Ten Commandments possess, to exploit whatever synergy might exist between finance and God.

Bruce Wilkinson's "The Prayer of Jabez" is the most egregious example of the unholy alliance between business and spirituality. Though not a business book, "Jabez" does offer untold "blessings" unto all those who accept its special message of magic disguised as prayer. In a stunningly blatant display of apophasis, Wilkinson tells the reader he's not going to help you pray for material wealth from God and then spends the next 70 pages telling you exactly how to claim your God-given right to riches. Jabez has sold more than 9 million copies to date, with 13 million in print.

Two very separate and distinct ideologies are converging here in an unseemly partnership; traditionally, authentic spirituality has had very little to do with matters of wealth and business. I seem to remember a particular biblical analogy about rich men and heaven having something to do with camels and the eye of a needle. Is this the dawning of a new era of friendship between these two spheres?

Perhaps certain strains of religious zeal are completely compatible with business, after all. In the eerily prescient "Jihad vs. McWorld," published well before Sept. 11, author Benjamin Barber asserts that the great conflict of the 21st century will be the clash between the forces of tribal fundamentalism and secular capitalism. But isn't secular capitalism itself a sort of misguided religious fundamentalism? Is not the fervent faith in markets and their capacity to self-regulate a theological and not a rational belief? Is the Invisible Hand the Hand of God? Look at Enron, look at Long-Term Capital Management. Genius fails. Gods fall.

It's not bad that some businessmen are spiritual. Nor is it a bad analogy to say that business is war. It's just that one would like the money masters of Wall Street to be peaceful, moral men and not feuding religious warlords. What else are downsized employees but casualties of war? What else could stagnant wages, weakened unions, and communities blighted by job migration be but collateral damage? Modern business is war indeed -- a holy war waged by fundamentalist zealots whose misguided belief in the supremacy of the market has led to job uncertainty, threatened our national sovereignty through entangling international trade agreements, and produced the greatest income gap between the rich and the poor in this country since the 1920s.

It is not a new thing to say that our culture uses war as a metaphor for any conflict we have -- the war on drugs, the war on cancer, etc. -- and even the most ardent cheerleaders of Wall Street acknowledge the role of the military in American business. As New York Times columnist Thomas Friedman said three years ago, "The hidden hand of the market will never work without a hidden fist; McDonald's cannot flourish without McDonnell-Douglas, the designer of the F-15. And the hidden fist that keeps the world safe for Silicon Valley's technologies is called the United States Army, Air Force, Navy and Marine Corps."

Our new war is not the first to fold God, militarism and capitalism into one tidy package. But if we're going to go whole-hog on this holy war/holy business thing, then maybe it's time to borrow a page from that noble manager's handbook, "The Art of War," and use the enemy's force against him. Perhaps, if the entrepreneurial spirit moves me, I'll print up some Make Love, Not Business T-shirts when I get home from work tonight.

Kevin Leahy is a contributing writer to the literary journal Sweet Fancy Moses.