Men who hurt themselves for a living 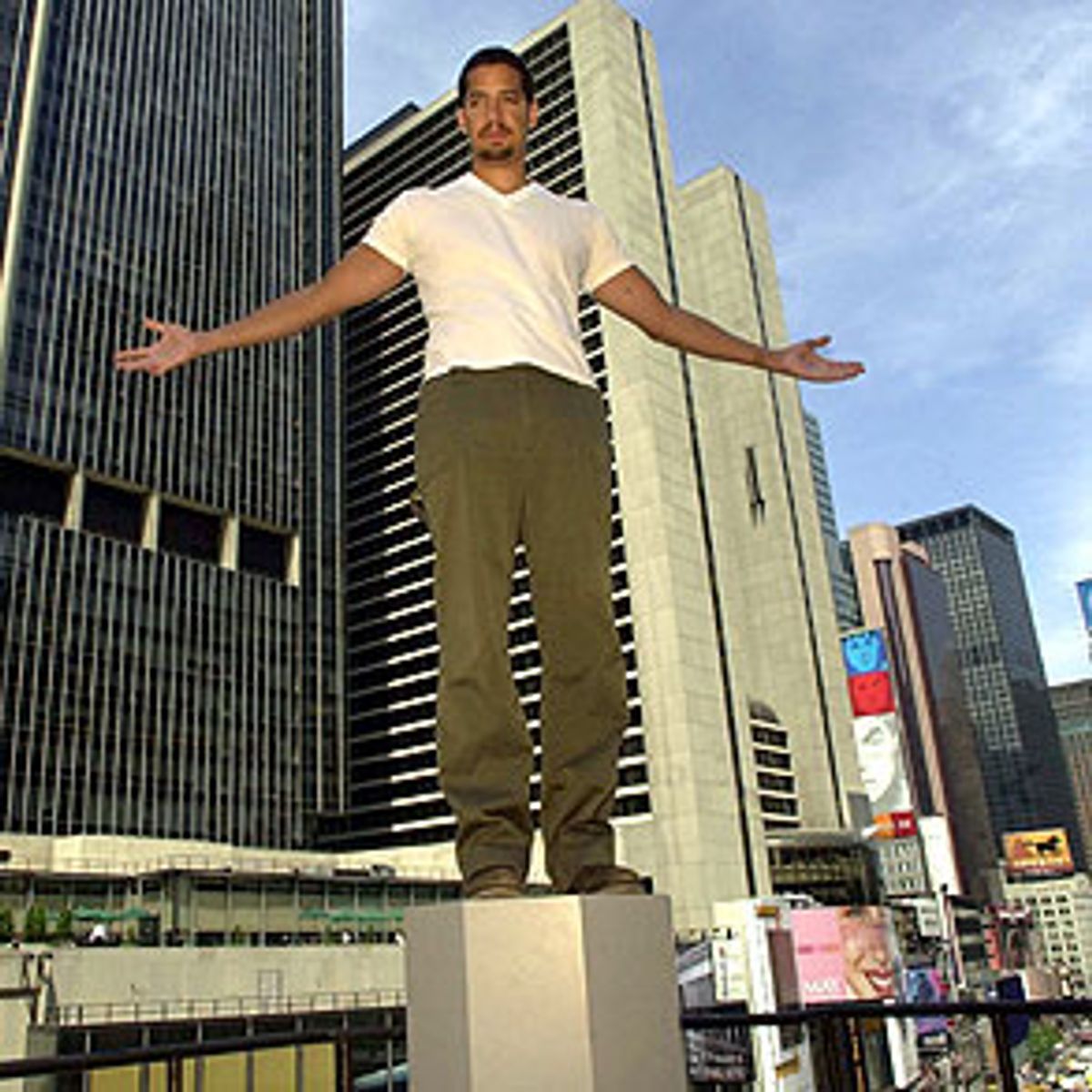 Before Sept. 11, in those long-lost days when America's bravest young men had no war, famine, saber-toothed tigers or any other actual challenges to pit themselves against, they were forced to prove their manliness through inventive forms of public masochism: the more gratuitous, idiotically conceived and potentially harmful, the better.

Spearheading the ranks of bescabbed professional skateboarders, fractured BMX riders, dead BASE jumpers, no-necked backyard rasslers and hundreds of jacked-up halfwits that make up the puncture casualties at Pamplona's annual running of the bulls are two celebrity self-torturers who arguably occupy the drivers' seats in the demolition derby that is the American male mystique: MTV's "Jackass" star Johnny Knoxville and model-mystifier David Blaine.

Both young men are hawt, fashionably macho, and famous through their acts of simulated crisis.

Blaine will mount a 90-foot pole in midtown Manhattan tomorrow and stand on a circular platform for 35 hours before jumping, on Wednesday, into a big pile of cardboard.

Knoxville once put live leeches on his face.

In the past couple of years, Blaine has been buried alive for seven days in a glass coffin and spent 61 hours standing in a large ice cube.

Knoxville let us watch as he got a colonic while wearing a Santa suit.

Blaine raised a pigeon from the dead. Johnny swam in shit.

Blaine is famous for "street magic," which seems to mean taking classic sleight-of-hand tricks to the South Bronx and performing them for excitable black and Hispanic teens in a haunted-sounding monotone. Knoxville is famous for such stunts as being voluntarily shot with Taser darts and rolling around in giggling anguish (although, sadly, now that he's a movie star, he does it only in reruns.)

If this were the '70s, both Knoxville and Blaine would be important conceptual artists (that is, if Blaine didn't end up a cult leader instead). Many "Jackass" installations closely resemble the '70s offerings of artist Paul McCarthy, who would sit in a bathtub wearing a wig, drinking ketchup, and stuffing raw sausages in his mouth and up his ass (the latter with the assistance of handfuls of Pond's cold cream) to the point of illness. Both Knoxville and Blaine are the intellectual godchildren of masochistic artist Chris Burden, who for his MFA thesis in 1971 locked himself in a 2-by-3-foot locker for five days at the University of California at Irvine -- the first of many such endurance pieces in his career. Later in '71, Burden had a friend shoot him in the arm with a .22, and in 1974 he crucified himself on top of a Volkswagen.

It is only serendipity that put Knoxville on MTV as opposed to the Whitney with a placard above his video installations reading:

As for Blaine, he recently discussed with Rolling Stone magazine his wish to be shot .

Knoxville and Blaine belong to the same genus of masochist but are of different species. Hip grown men tend to dislike Blaine, whereas they adore Knoxville. "Blaine is a pansy, fairy, and self-important prig," one friend of mine sneered. "Knoxville is like that incredibly selfless best friend you've always wanted, who does all this whacked-out, wild, hilarious shit that makes you want to be around him all the time. He's a rock star."

Blaine might be wearing a Mylar cummerbund and performing in Vegas with an albino ocelot if he were not (1) a photogenically seductive, tattooed, proto-geek/thug contradiction, (2) strangely Rasputin-esque and maybe psychic, and (3) a champion star fucker. His best trick is spending long periods of time in elaborate public imprisonments, which is comparatively interesting, even compared to the voluntary group-torture/humiliation dynamic of reality TV. Blaine's problem, however, is his spin on these events: He is tragically prone to fucking up his image with whiny, sissy-drama histrionics.

Whilst Knoxville and crew do similar stunts with a hearty "Bah-har-har, it's only a flesh wound," Blaine seems depressed and frightened by his insatiably attention-seeking stunts and developmentally retarded by an ego fantasy that makes him see himself as a Mystically Accursed Spiritual Heavyweight. "I've got a bad feeling about this one," Brood-o the Unhappiest told Erik Hedegaard of Rolling Stone recently, when asked about his upcoming stunt. "When I think about it, I get these sharp pains in my head. I'm worried I'll end up in a wheelchair for life, broke, with nobody around me It scares me It's too late to fucking back out now."

Blaine's TV special last year, "Frozen in Time," was a fret-fest surrounding his three-days-in-an-ice-cube gambit. "At the end of this hour, they're going to bust me out. Hopefully, I'll survive," Blaine cryptically and shirtlessly informed us, his staring eyes as intense and worried as the identically intense and worried eyes tattooed on his shoulder. Blaine had announcers urgently intoning his release from the ice structure in breaking-news style with graphs and logos, like he was the Gulf War. The camera, with Live Emergency-flavored editing, hung on the face of Blaine's concerned model-girlfriend Josie Maran as she gazed -- with the heart-wrenching bravery of a fireman's bride -- on the self-inflicted disaster.

Announcers repeatedly assured the audience that the event was "potentially life-threatening" and frantically reminded us that Blaine could suffer such horrors as blood clots, hypothermia, or frostbite. Nobody bothered to mention that igloos are made of ice, and that ice insulates rather nicely, and that Inuit peoples have been building their homes out of large ice cubes since their ancestors crossed the Bering Strait. At last, when Blaine was dramatically chainsawed and carried out of the dripping ice-sarcophagus, there was no joy.

"Josie my mind my mind There's something wrong," he moaned, as soon as his lips touched the microphone.

Oh no, God! we, Blaine's loyal audience, were to fret. The poor boy's entering the Tunnel of Light! His brain has freezer burn! He he may DIE!

Blaine was quickly swaddled in Christly blankets by hundreds of screaming medical personnel and hysterically rushed into an ambulance to be treated for "disorientation." In a city like New York, where a man may wait hours in the emergency room to get bullets tweezered out of his liver, the spectacle of this massively overstaffed hospital pseudo-trauma was rather off-putting.

In the '70s, when the ratings got low on a sitcom, the producers would oink out "a very special episode," which wouldn't be funny at all and usually featured some frantic medical problem while the show's theme music whimpered in a minor key. Why must the popular and talented Blaine resort to this cheap, soap-sucking fearfulness? In a world where eating shellfish or cleaning your bathtub is "potentially life-threatening," Blaine, it is oft commented, could use an occasional bitch-slap.

Knoxville, who tended to emerge from his idiotic stunts with large bruises, broken skin, or a leg brace, used to downplay his maiming, to hoots of approval. The Jackass team, and in particular one unsung atavistic freak named Steve-O, seemed to revel in deep discomfort, searing pain and vomit.

Steve-O got his ass pierced and he bobbed for jellyfish; he snorted a live earthworm and pulled it out through his mouth in a flurry of dry heaves ... These, the public agrees, are acts of daring that require serious mental discipline. Knoxville commented in one interview that when he's enduring painful acts, they "get me so hot I feel just like Audrey Hepburn in 'My Fair Lady.'"

Blaine, on the other hand, told the New York Times recently that "when I'm doing the stunts, it's the only time I feel alive," giving the impression that his glamorous life is actually really, really heavy and miserable.

Strangely enough, the levity and criminal irreverence that the Jack-I (plural) brought to their worthless acts of self-mortification made them deeply inspiring in exactly the way Blaine keeps explaining that he wants his work to be. Knoxville comes across as someone who could do everything Blaine does, then have a dwarf wearing a king suit kick him in the balls afterward, and the worst that would happen is that he might fall on the sidewalk and writhe for a while. This kind of cap-and-bells-bedecked fearlessness is admirable, although one could argue that anyone who would don an athletic cup and let somebody throw cue balls off the roof at his genitals perhaps needs to be shot at by a real enemy for the advancement of God and country.

To rectify the wolf-crying that has become the biggest blot on his career and earn the awe and respect he craves, Blaine will eventually either have to do some kind of stunt that actually kills him or embrace advanced moronics himself. Perhaps a head-to-head combat TV special would be in order, wherein Johnny Jackass and Davey Blaine compete in a daredevil tournament of pain endurance and aggressive personal power. I envision the two of them, wearing bungee harnesses, being thrown at each other from separate points off the Verrazano Narrows Bridge. Their respective camps would then swing them toward each other and have them joust with penitentiary-issue stun batons. It would be a remarkable battle: Blaine's supporters biting their knuckles and holding a somber vigil, Knoxville's drunken merry idiots attempting to chew through the cords and urinating down on him. At the end of the tournament, they'd both be covered with small, circular burn marks, but we'd know who had the real magic, once and for all.