The most disturbing "Buffy" season ever ends with our most beloved character becoming a monster -- without losing our sympathy. 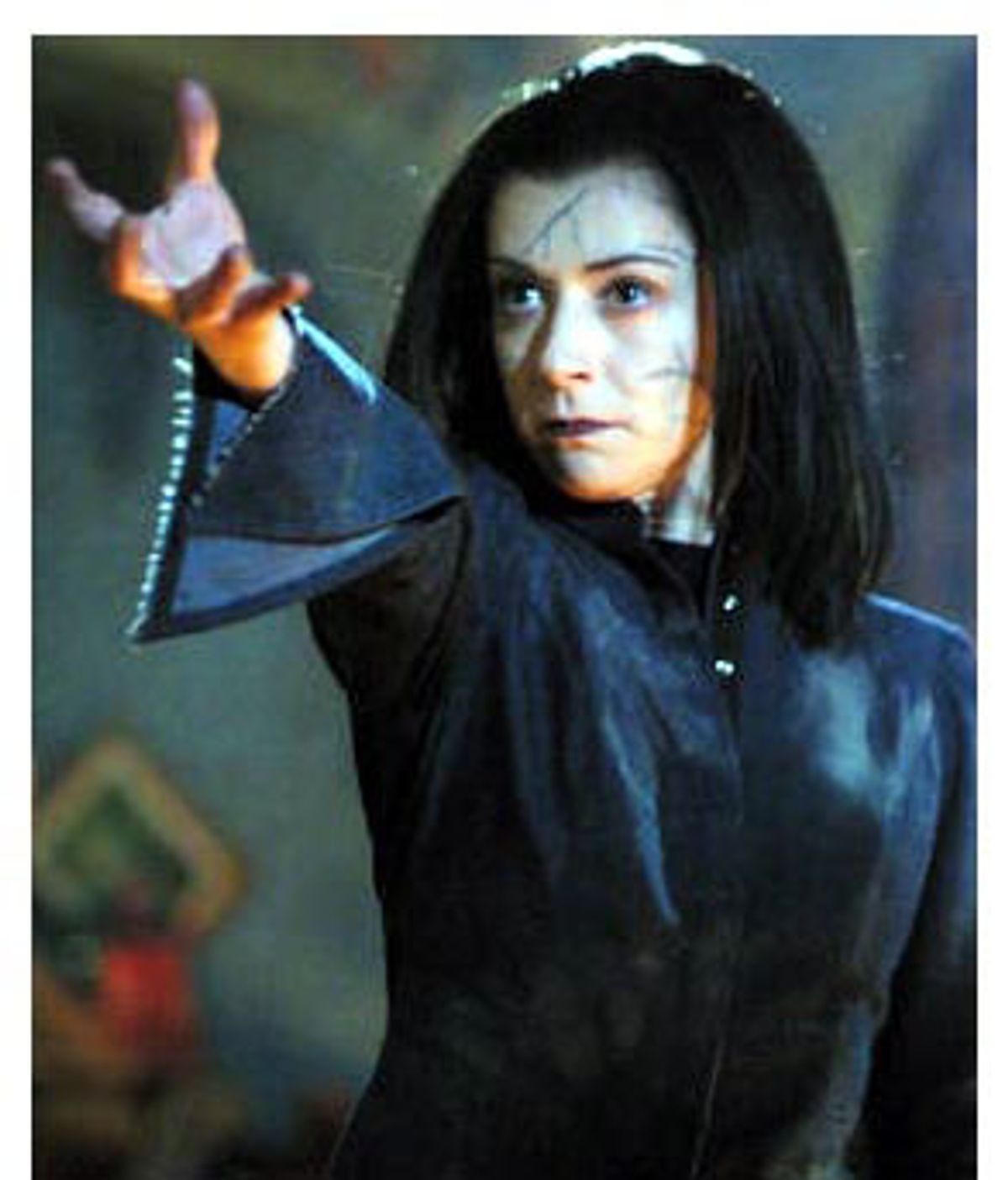 We don't like to think of television as art. When we're drawing up the divisions of what can and can't be thrown into that immense handbag of a category, we readily acknowledge that the right sorts of books and movies can usually slip right in. The boundaries are even more porous when we're talking about fine art; its jellyfish embrace expands to hold both the paintings of the great masters and installations consisting solely of toilet seats.

But what do you do with a show like "Buffy the Vampire Slayer"? "Buffy," created and produced by Joss Whedon, started out as a show about a group of teenagers dedicated to pulverizing the vampires and demons who had invaded their previously tranquil town of Sunnydale (the name alone marks it as a magnet for evil; it's like a virgin begging to be corrupted). From the start "Buffy" has always had hidden, or not so hidden, strata of emotional riches. But now, at the end of its sixth season, "Buffy" has grown up and out into a deeply layered epic, with characters that some of us feel we know as well as Captain Ahab, David Copperfield or Emma Bovary.

It's pointless to spend much time wrestling with the question of whether TV can be art (of course it can be and often isn't). But there have been many days when, after a particularly potent "Buffy" episode, I've found myself feeling vaguely off my game, my mind clouded with a gauzy, muted sense of dread. When a show jostles your equilibrium to the point of haunting your days or robbing you of sleep, when it finds a place in your imagination that also rubs, hard, at the core of who you think you really are, it starts to look like something more than what we simply call TV.

The season finale of "Buffy," which aired Tuesday night, followed weeks of buzzing on "Buffy" online message boards, some of which have been vibrating resoundingly with charges that "Buffy" is anti-gay, misogynist, or both. Some fans in the lesbian community have asserted that by killing off one-half of the show's lesbian couple -- Tara, the girlfriend of the very mild-mannered, very brainy but also, we now know, very powerful Willow -- Whedon destroyed one of the few positive lesbian role models on television. Thus, they argue, it follows that he's most certainly anti-gay. Other fans have said that every character who gets killed off on the show is either black, gay or a woman (or any combination of the three), which surely marks Whedon as a misogynist and/or a racist.

What it really tells us, though, is that Whedon has an ear for tragedy that draws from some of the most classic examples, from ancient Greece through Shakespeare and beyond. The characters that he loves (and we love) the most are also the ones who suffer the most. I don't think it's a coincidence that most of those characters are women. Since the beginning of the show, Whedon has reserved the richest and most troubling complexities for his women characters. No one escapes suffering in Whedon's universe, but we're made to identify most with the women: both with minor characters like Joyce Summers, Buffy's mother (who was almost always an annoyance and yet whose death left an unimaginable void), as well as, of course, the two women who pump more blood into the show than anyone else -- Buffy and her best friend, Willow.

The season finale of "Buffy" belonged, unequivocally, to Willow, despite the fact that Buffy is the series' star. It didn't have the queasy-making resonance of Whedon's finale last year. In that episode, he did the unthinkable by killing off his own heroine. (She would later be raised from the dead against her will, inciting a longing in her that will not be fulfilled until the day her heart again stops beating. And that's just a subthread.) But this year's finale nevertheless threw the show and its characters into yet another light; it has changed the shape of their shadows, showing us things in them -- resources of unusual bravery and cruelty -- that we couldn't previously have imagined.

Willow, far from being a cut-out angry lesbian, is more fleshed out, and more terrifyingly alive, than she has ever been before. More than any other character, she has driven the momentum of the past few episodes; she very nearly drove it off a cliff.

Willow watched as Tara, the person she loved best in the world, was struck by a bullet fired by the nerdy but unconscionably evil Warren. The bullet had been intended for Buffy. Buffy lived, but Tara died in Willow's arms, inciting a propulsive grief in her that couldn't be contained even by obsession: It couldn't flower into anything less tropically blood-red than rage. Over the years Willow had become a powerful Wicca, but she gave up magic after realizing she had been seduced into a dangerous dependency on it. With Tara's death, it becomes her only ally -- her grief is so great that she can't bear the company of humans.

Willow's tirade begins with a plea to the great god Osiris to restore Tara to life (a plea that's refused) and ends with nothing less than the orchestration of the end of the world (which is aborted, but just barely). In between, she avenges Tara's death by torturing and flaying her killer -- but not before summoning, to taunt him, the woman he'd earlier nearly raped and then murdered. And, in her ever mounting wrath, she practically destroys every one of her remaining friends.

What's wrenching about Willow's behavior -- and Whedon knows it as well as anybody else -- is that it cuts against everything Tara ever stood for. She was one of the show's gentlest and most sensible characters; when Buffy confided to Tara, in shame, that she was ensnarled in an obsessive sexual relationship with Spike, Tara's response was astonishingly sympathetic. Ultimately, she would be the only character who didn't pass judgment on Buffy for that behavior.

You could argue that of all the characters on "Buffy," Tara was the one who stood most clearly for the right of human beings to live and love as they choose without having to explain themselves, and to make their own mistakes if need be. Her soft, pearlescent voice and shy, doelike eyes didn't contrast with her resolve; they were a huge part of it, and a most effective way of telling anyone who would dare to make rash pronouncements on her or her friends, "Get your hands off our business."

It's easy to understand why Willow would miss Tara so much. But anyone who has watched the show even semi-faithfully knows that Willow's rage, grounded partly in self-hatred, has been cooking all along. The show's followers know that Whedon has a penchant for dropping hints about what's going to happen, often two or more seasons in advance. In an episode several years ago, Willow temporarily became very, very evil, taking the form of a bisexual vampire seductress in leather pants and a bustier.

When she finally returned to her normal, understated, lovable nerd-girl self, she wondered aloud to Buffy and Buffy's then-boyfriend Angel (a tortured vampire with a soul) if maybe there wasn't some part of her that harbored those latent traits. Buffy hastened to reassure her, "That's your demon self. It doesn't have anything to do with who you really are." Angel blurted out, "Well, actually ? " and bit his tongue.

Now we know that for whatever reason, Willow has always been angry, and yet she's still the character we've grown to love. In last week's episode, we watched her absorb the knowledge of a hundred magic books through her very skin; the potent blackness of the type seeped through her fingers and up to the very top of her head, concentrating itself in her eyes, which grew into enormous, glittering ebony pools.

Later we watched Willow toy with Warren in what must be one of the most protracted torture scenes ever shown on television. Then she kills him, peeling his skin off in one lightning-quick zippered flash. There's something potently sexual about the act (she has denuded him in the most drastic sense) but it's nonetheless horrifying. We're shocked to find that there is a point at which we can sympathize with a murderer.

Even then, our sympathy for Willow only deepens. Buffy entreats her to stop her whirlwind of destruction, repeatedly telling her that it's the worst possible way to honor Tara's memory. While we know that Buffy's right, we can also see the angry petulant child in the normally very adult Willow, the child who realizes that someone who rightfully belongs by her side has been taken away forever. It doesn't seem so far-fetched that she wants to destroy everything both outside and inside herself, just to cover all the bases.

Beyond that, what's fascinating about Willow's ultimate return to the real world, and to her truest self, is that it doesn't come about as the result of physical force or macho posturing (not even Buffy's macho posturing). What changes her back is Xander, her best friend since kindergarten, telling her how much he loves her even as she slashes deep into his skin with invisible knife blades every time he utters it. It might be Whedon's way of saying that the best traits of men are sometimes those we associate with women.

Willow has occasionally complained of having to creep along in Buffy's shadow, but in this episode, she thrashes her way out of it. For a change, then, Buffy has all the tenderest moments. Her old mentor Giles, who had left her months earlier to return to his home at England, suddenly returns to help sort out the trouble with Willow. After working a particularly impressive feat of magic that temporarily constrains her, he pauses to take a good look at Buffy for the first time: The air in the room seems to have been reduced to the little space around them as he looks at her with tenderness and wonder and says, simply, with all the love that only the English are able to pour into even the most seemingly reserved statements, "You've cut your hair."

Whedon's finale leaves plenty of questions unanswered, most notably the fate of the twisted romance between Buffy and Spike. A few episodes back, in one of the most disturbing scenes I've ever seen on television, he attempted to rape Buffy and came close to succeeding. Now we learn that he's undergone an arduous and near impossible task, for a prize he may not have wanted: a soul.

What Spike hopes to accomplish now isn't clear, but of course, that's how any season finale worth its salt should end. Fans of Whedon and "Buffy" know that the fun of following the show is always mixed with some apprehension of where Whedon is going to take it next. You might say that the maxim he lives and works by comes from another T.S. Eliot poem, one that's both sinister and hopeful and holds the weight of the world in eight simple words: "There will be time to murder and create."