"Lucky in the Corner" by Carol Anshaw 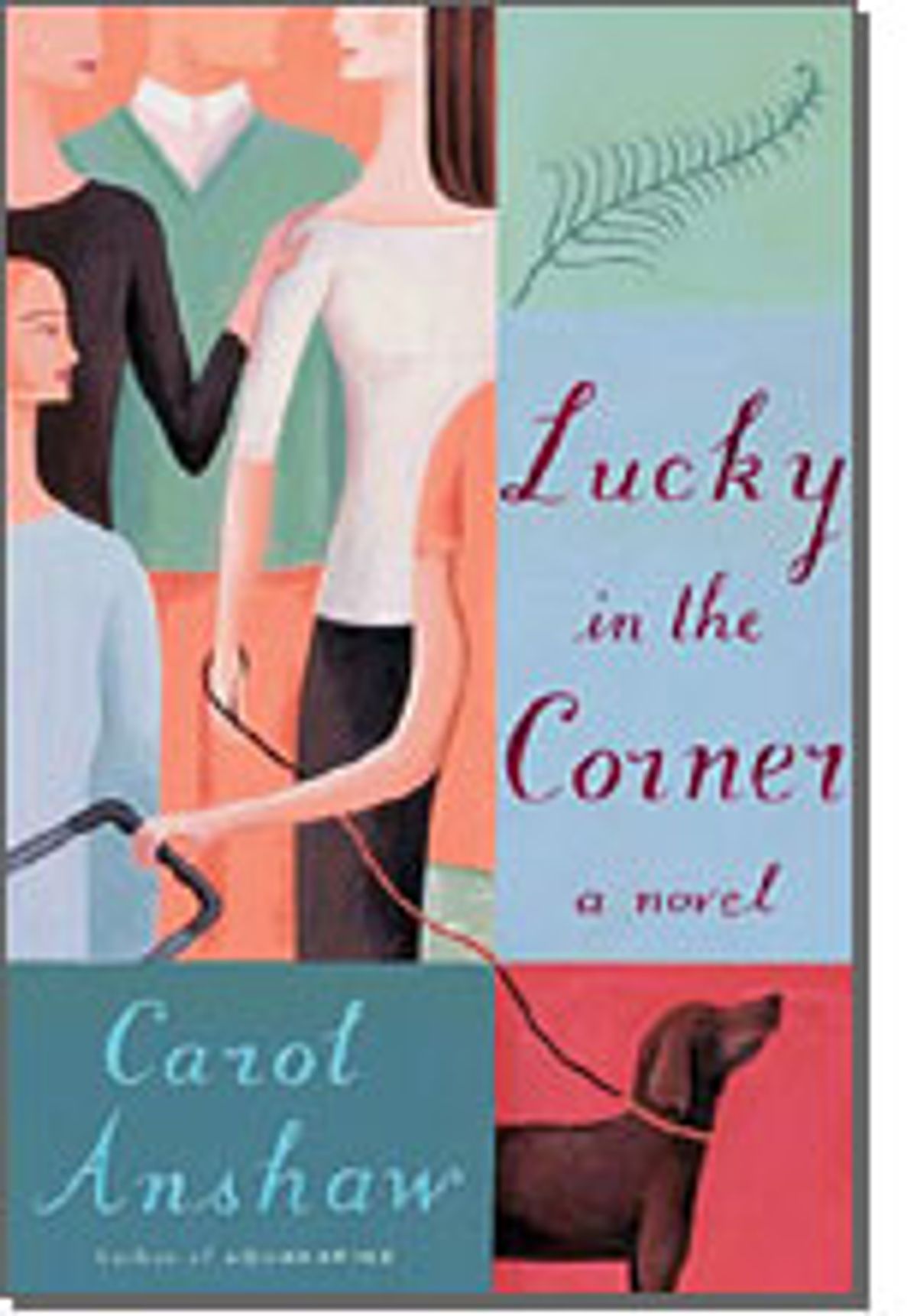 Fern, a 21-year old anthropology major and part-time hotline psychic, still hasn't come to terms with her mother Nora's wayward love affairs. And at first, it seems as if the beautiful, elusive Nora, who divorced Fern's father years ago and is now a lesbian, functions as just another fictional mother struggling to make peace with her sullen, awkward daughter.

But in Carol Anshaw's "Lucky in the Corner," the official roles of parent and child blur together, or become permanently swapped. All of Anshaw's topsy-turvy characters are uncomfortably wriggling out of some realm of adolescence, often ending up with responsibility rather than wholeheartedly accepting it. Fern, for all her desperate boyfriend yearnings, her dieting to feel shorter and her unpredictable mood swings, sometimes has a better handle on things than anyone else.

Fern takes pride in being loyal and constant because she remains haunted by her mother's tendency to leave. Nora's "retreat was into herself, pulling back from Fern and her father and shutting a tight door, like on a refrigerator, a door with a seal. You didn't know if, inside her, the light was on or off." It's clear that Nora cares deeply about her daughter, but her destructive impulses are just as deeply etched in her character. Fern eerily senses when her mother's on the verge of making a mistake: "For all the distance that has set up between the two of them, they are still linked by molecular structure." At first these moments scare and even disgust Fern, but with time, she views her mother sympathetically. Fern knows that Nora won't control herself, and more important, she realizes that they'll both survive the aftermath.

Anshaw delivers many twists in "Lucky in the Corner"; various flashbacks work flawlessly, giving us a deeper knowledge of Fern or Nora or Nora's heterosexual transvestite brother, Harold, moments before they behave in ways that significantly alter the present. In fact, the majority of the book is a flashback from the opening scene -- an awful car crash on Christmas morning with the hint that Nora knows why it has occurred.

The rest of "Lucky in the Corner" builds up to that day, explaining why Jeanne, Nora's live-in lover, will suffer terribly and why Fern is taking care of Vaughn, a friend's child. Always hovering above the mess are Harold and Nora's eccentric showbiz parents, a little disappointed that their strangely enchanting children didn't become stage stars (Nora's a college administrator, Harold's a waiter), yet persisting happily in their self-absorption.

Yet Fern and Nora are the heart of the book and Anshaw cleverly shoves them into similar circumstances in order to draw out their differences. Fern heroically takes in Vaughn after his mother abandons him for another bad boyfriend; Nora gave birth to Fern when she was Fern's age and married her father in an attempt to do the right thing (even though she'd been recently outed in an affair with her boss).

But Nora never recovered from that early jump into adulthood. Despite now being happy and stable and in love with Jeanne, Nora becomes helplessly attracted to another woman. She's aware of her confusion: "Here is the very scary part, the idea that you might think this huge, invasive force is love and too late see it's only obsession in a cheesy costume, with a zipper up its back." Fern also suffers from a broken heart, but unlike her mother, realizes much sooner that it's not really love, or at least that it's something best left in the past.

Anshaw tenderly shows us how some people bumble through life, breaking things clumsily and scrambling to put them back together, while others -- maybe those not as immediately dazzling or successful -- ease their way slowly. All of them are trying on different personas for size, seeing what fits. (For his part, Harold turns to bras for self-transformation.) As Nora explains to Harold, "I really don't know if what I find when I get way out there is my worst self, or my most authentic." The trick might be knowing when to stop searching.

Our next pick: A naive grad student seeks authorization to write the biography of a suicidal novelist