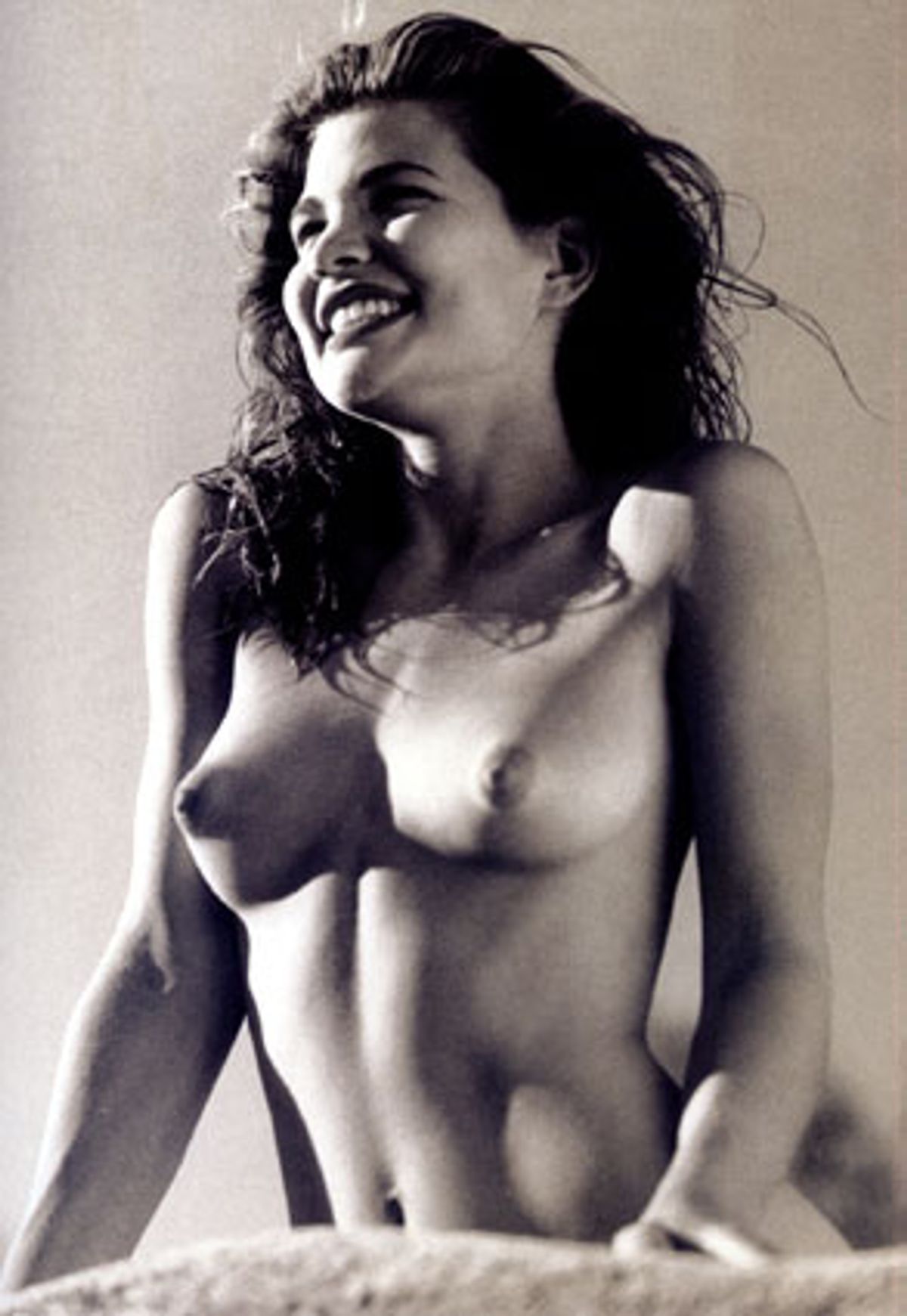 Some of you may be relieved to learn that in Jasmin's lexicon, the title has personal as well as mythic meaning. The 68-year-old purveyor of timeless images rooted in an American past was born in Montana and found himself drawn to the klieg lights at the end of the Western frontier. His past movie biz activities include a stint as an actor -- he appeared in and did still photography for "Midnight Cowboy." He also provided the voice of the dead mother, Mrs. Bates, in "Psycho," a legendary addition to anyone's résumé.

Most of Jasmin's pictures are in black-and-white, like classic studio publicity shots. But there's something else that happens; it's as if he's peeled up a layer of propriety to expose skin and sexuality, though never in a blatant way. They're images of faux and actual starlets and leading men bathed in nostalgic and dreamy auras. Somehow it's not surprising that the photographer admits, in one of the short texts in this book, that he still dreams in the 1950s. His pictures are lush, luminous visions that may be rooted in a time and place, but they're not stamped with an expiration date. They have staying power that emulates the way Jasmin's idols have eternal appeal.

Liz Taylor, Montgomery Clift and Robert Mitchum are his self-proclaimed favorite actors, though he's also on record with his admiration for Beat poets and writers -- Kerouac, Burroughs and Bowles. (Jasmin even lived in San Francisco at the peak of the Beat era, and made an early 1960s foray to Morocco where he met Bowles.) All have reputations that don't appear in danger of being shaken from their iconic positions anytime soon.

And neither does Jasmin. While his work has been seen in the fleeting contexts of international fashion magazines, it goes a bit deeper. He's something like a psychic medium who can make contact with the spirit of Hollywood past and transfer that energy and style directly into his photographs. Heck, he even lives in a Moorish-style house that Cecil B. DeMille built.

The attractive models featured in Jasmin's pictures include bona fide movie stars -- Richard Gere in "An Officer and a Gentleman," Mila Jovovich in male drag, Sofia Coppola (who contributes a short introduction) reclining on a couch, her chest draped only in beads, a glamour portrait of crooner Chris Isaak and a color shot of the supremely but humanly handsome Viggo Mortensen. But these celebrities are folded into a continuum where supermodels and comely youths serve as highly convincing doubles for film world royalty.

Take the stunning picture "Erika, Death Valley" (1998). It features a statuesque brunet in a classic one-piece bathing suit posing between two aging palm trees. Her reflection wavers only slightly in the glassy, mirrored surface of what looks like an oasis pond. The woman, who could be a stand-in for a smart 1930s starlet, peers to the side into the desert distance, revealing a perfectly divine profile. She's a goddess -- a vision of Liz, though more svelte than Liz ever was, even in her physical prime -- and one whose regality could only be constructed by the industry. The coltishness of this woman brings to mind the models used by Bruce Weber, whom Jasmin has known since the late 1950s, and to whom he dedicates this book; yet Jasmin's American vision tends more toward the sophisticated than the wholesome Abercrombie & Fitch body types favored by his pal.

A similar idea of constructed allure comes through in "Kathy, Hollywood, CA" (1988), in which the solid, sexy nude model reclines on a chair draped with Mexican blankets, a 1940s staple, applying her make-up. She stares resolutely into her round compact mirror, and holds an applicator brush in her other hand, which rests over her belly and just above her crotch. The picture exudes an alluring confidence, something between narcissism and graciousness. She's putting on her face to please herself, and her public.

Jasmin also finds this kind of preening self-reflection in the male animal. In a moody color image from 2001, a strapping lad named Mark is seen pondering his fine unclothed form in a bathroom mirror, the walls and vintage fixtures suffused in a beachy bluish light. Behind him in the reflection are luxurious magenta fabrics that add a hint of richness to the scene. Again there's a sense of self-absorption, but at the same time, he offers himself graciously. The double-page spread that follows offers an almost human scaled close-up of his lean belly and the top of his pubes. It's overt in the way a Greek statue might be -- gracefully curving expanses of muscle and form.

A good number of the men in this book hark back to a more recent past in their resemblance to Johnny Weissmuller. These models wear tight trunks and those old-fashioned one-piece suits that resemble wrestling gear. Their bodies, however, betray the tauter torsos of a new gym-toned era. Here again, Jasmin has a masterly eye and taste; his models have updated physiques, but not excessively perfect ones. That whiff of realism makes his models more timeless and sexy.

One of Jasmin's most enduring images, "Josie and Paula, Hollywood, CA" (1991), has overt lesbian appeal. This black-and-white shot depicts two topless women seemingly cavorting at a Hollywood Hills garden party. Each has a short, boyish hairstyle. One, who wears a hot pants-like undergarment, is captured in the midst of a hearty laugh, her arm around the other, who wear white linen slacks. It's like an inside Hollywood moment, when that classic screen star could express her sexuality freely. It's the kind of moment discussed with bile in Kenneth Anger's gossipy ode to Tinsel Town scandal, "Hollywood Babylon," but here it's played for pleasure. It's like a kinder, gentler Helmut Newton picture. Jasmin's women are powerful in their libertine stance, yet at the same time, they're precariously perched between icon status and vulnerability. If you took them out of the silvery light of the past and expose them to the more toxic air of the present, they might crumble.

Fame, after all, is fleeting, yet the moments of full flower are more often caught on film. There's one self-portrait included here. The 1980 picture is of the photographer's delicately proportioned feet below the knobs and faucet of a tiled bathtub. A trickle of water drips out and seemingly dances over his toes like a glimmering trickle of mercury. It's an extremely sensual image that gently evokes memories of physical sensation. In Jasmin's work, such simple moments resonate as the most glamorous of all.