Procreation without sex, smarter babies and the right to choose the sexual orientation of your kids -- it's all good, says scientist Gregory Stock. 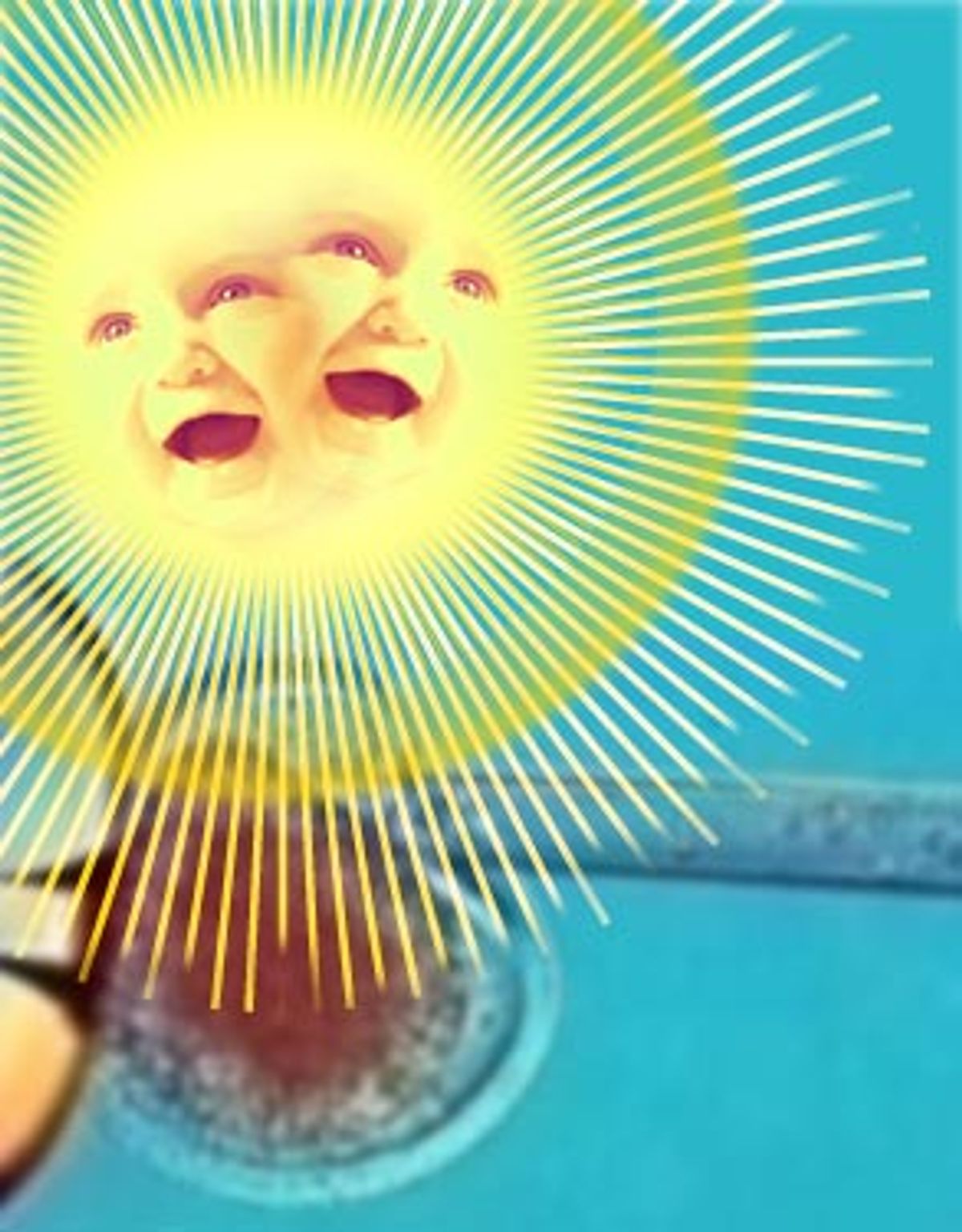 Get those dystopic nightmares about genetically enhanced clone armies out of your sci-fi addled brain. Wipe the chilling phrase "designer baby" out of your short-term memory bank, and at least entertain the possibility that tinkering with our genes might make life longer, healthier, happier and better.

Gregory Stock, the director of the UCLA Program on Medicine, Science and Technology, considers genetic engineering to be just as natural for humans as other technologies we've created: just another part of our evolution as a species.

His new book, "Redesigning Humans: Our Inevitable Genetic Future," responds to critics who have called for heavy regulation of biotechnology, among them political theorist Francis Fukuyama.

While skeptics worry that "playing God" can only lead to big trouble, Stock argues that trying to prevent beneficial technologies from being developed is much more pernicious.

Stock talked to Salon by phone about why he thinks genetic engineering will (and should) radically change life in the near future, including taking sex out of reproduction for many couples.

Suppose many parents start making choices about the kinds of children they have, based on their genes. Won't there be weird societal side effects? For instance, one critic wonders what would happen if millions of individual parents could choose whether their child would have a genetic predilection to be gay. Could that lead to the elimination of gay people from the population?

You can project all sorts of fears about the choices that people will make in the future using technologies that we really don't understand in any depth at this point. And of course, you can come up with all sorts of scary scenarios.

I look at that example and say: Actually, just the opposite is beginning to occur. Gay couples are beginning to have children, through the use of various assisted reproductive measures. And if offered a choice, they're probably going to choose to have gay children, right?

My view is that we don't have the wisdom to understand these technologies yet.

So what do you think the appropriate approach to them should be?

You wait to see how people actually use them. You keep an eye on them, and you don't outlaw them and drive them underground or overseas, which just has the effect of reserving them for the wealthy.

If you begin to find that parents are choosing to eliminate certain traits, then you decide whether that really is a problem that we need to address.

I think an excellent example is sex selection. I don't see who is injured by allowing a couple that has a very strong feeling about not wanting a child of one sex or the other to avoid having a child of that sex.

Sex selection is legal in the United States. There are ways of doing it now where you don't even have to discard an embryo. You can sort sperm. There's a slight difference between sperm that have an X chromosome and a Y chromosome. The one with the X chromosome is very, very slightly heavier. It has about 3 percent more DNA so you can stain it, and you can identify it.

So, you can sort those sperm and with a reasonably high likelihood of success -- it's not perfect -- you can create an embryo that is going to be a boy or a girl, through in vitro fertilization.

I don't see how it's that different when you adopt a child; you choose a boy or a girl. There's no outcry about that.

But what if you end up with a society that has 20 percent fewer girls, like in China?

But in the United States that absolutely is not occurring. And we must remember that in China it is illegal to do sex selection. So the government is very ineffective at preventing the practice.

If that began to be a problem here, there are lots of ways that you could respond to it. Something as innocuous as saying that any in vitro fertilization clinic that does it needs to do equal numbers of selections for boys and girls, in order to be licensed.

Some critics argue that if market forces are allowed to drive biomedical research, the rich will perpetually enshrine their social advantages genetically, by making their kids smarter, better looking and more ambitious. But you suggest that the most elite members of society might be the ones most resistant to these enhancements!

All new technologies tend to be available to the affluent, educated individuals first. But if you look at what's technically possible, it's not to enhance someone who is already at an elite level. It is much easier to cure some metabolic imbalance that leads to mental retardation. So, that's likely to happen first, and that has a leveling effect.

If everybody is above average, then those who are already high performers are kind of devalued. It becomes like Garrison Keillor's Lake Wobegon, where all the children are above average.

So, instead of dividing society into the genetically enhanced haves and have-nots, genetic engineering will just make us all more similar?

The real gulf is going to be between one generation and the next.

The richest person in the world 20 years ago could buy a better computer than anybody else, but it was a lousy computer compared to what anyone could buy today. And so it will be the same way with disease screening.

If Bill Gates is having a child and wants to screen for diseases, he can pay any number of billions that he wants, and he can't screen for anything compared to what any clinic is going to be able to screen for 10 years from now.

Why do you think that it's wrong and futile to regulate these technologies out of existence?

People talk about reproductive technologies, genetic enhancement and anti-aging interventions as if they're independent from medical technologies, but in fact what we're doing is unraveling biology.

There are huge numbers of people who would like solutions for Alzheimer's, heart disease and cancer. So, we're really pushing forward very aggressively on those, and as a natural spinoff comes the kind of knowledge that allows us to do some of the things that many people are far more conflicted about.

In order to stop the one, you basically are taking real people with real diseases and saying that they'll just have to be sacrificed.

Do you think that the debate over genetic engineering will come to resemble the abortion debate, and just be this intractable pitched battle that will never be settled?

I think that there will never be a consensus on this. It really is too much a reflection of our philosophy, religion and history. It touches our values too deeply. There are going to be people who will never use this technology because they think it's wrong.

But won't you then get into this Darwinian phenomenon of the people who remain "natural" falling behind? And, if certain countries outlaw it or shy away from it, won't they fall behind?

Yes. I think that we're going to sort of manifest our philosophies in our biology. If you look at two countries -- say Thailand and Germany. Germany is much wealthier and more technologically advanced, and I think that it will be much slower to embrace the possibilities of these kinds of technologies. But they will probably change their attitudes rather quickly as these technologies begin to be feasible.

You argue that market forces will protect us from bad technologies. Will large numbers of people in a society have to accept a new technology in order for the research to be funded for it to be developed in the first place?

Things that people don't see as beneficial are unlikely to be developed.

Whenever I talk about these things before audiences, people come up to me afterwards and say: "Well, I'd be very reasonable in using this. But everybody else -- I'm really afraid what they'll do with it." Virtually everyone says that.

I think that actually most people, the vast majority of people, will be quite responsible. Parents will be responsible because they'll have to suffer the consequences.

Do you think that this is all just the next natural step in human evolution?

Yes. I think it is. I cannot imagine us not going down this path without the imposition of a totalitarian sort of control that would be so extreme that it would be far more to fear than the possible misuses of these technologies.

If you could take a drug or a pill that would make you be vital and in your prime longer, and then the government tried to tell you that you can't do that, would that be an abusive totalitarian regime, or what?

Do you really think that some day people will view sex as entirely recreational and procreation something best done in a lab?

First of all, I think that at this point, sex is significantly viewed as recreational, and what brought that about? Contraceptives.

But, within a generation, as in vitro fertilization becomes easier and it is possible to run easy genetic tests that screen for various kinds of genetic diseases, a lot of people will say: How can you not do that? You know, you're subjecting your child to a lot of risk.

It will be like if you don't get prenatal care today.

Still, people are going to have sex to have their children, but it will gradually be more and more accepted that kids are just too important to take the risk that something may be going wrong.

In fact, today, if you could be guaranteed of having a healthy child, as long as you did some sort of conception process that was very easy, I think an awful lot of people would choose that process.

When do you think that human cloning is actually likely to happen?

Cloning is way too dangerous to do now. But it is almost certain that it will occur within five to 10 years. Before responsible medical professionals believe that it is safe enough to do, it will be done by somebody else. And before it can even be done, it's almost certain to be announced, falsely.

So, what new genetic technologies do you think are more likely to happen sooner?

Pre-implantation genetic diagnosis, which is embryo screening, already exists. It's been done for about 10 years. The avoidance of disease through these technologies is going to become increasingly commonplace, as in vitro fertilization becomes easier, and as the range of genetic testing is increased.

The challenging part of that is going to be when tests are done for things that are not strictly disease related, like personality and temperament.

And then the final stage will be direct germ line interventions. That's where there is the possibility of going in and adding an extra chromosome, which sounds science-fiction-y. But there are artificial chromosomes, rudimentary ones, that have already been put in tissue culture in human cells.

And that prospect doesn't frighten you? The sci-fi-ish one?

I think that future humans are going to look back at this period now, and see it as a very, very primitive time. I think they're going to go: "My God, people used to live into their 70s, and then they died of horrible diseases at that young age, and children were just the problem of this random meeting of sperm and egg. This is really strange."