Who cares about "Attack of the Clones"? After reinventing popcorn cinema with his giddy space western, George Lucas can do whatever he wants. 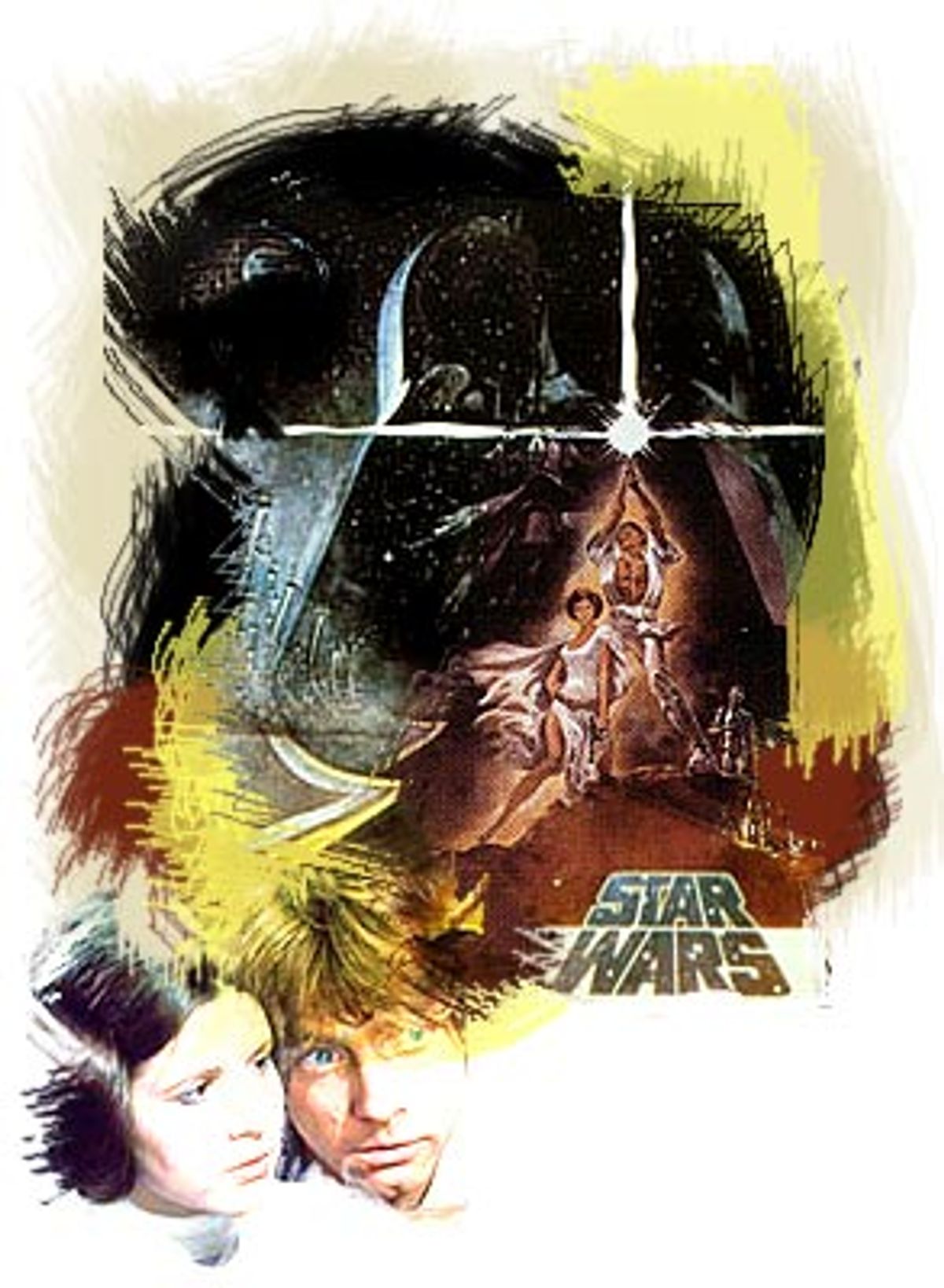 It's not often that our perception of a classic movie becomes transformed two decades after it was first released. Although today's film reissues often include new footage -- either to atone for studio hack jobs, like Orson Welles' "Touch of Evil," or indulge bloated director's cuts, like Francis Ford Coppola's "Apocalypse Now Redux" -- something altogether different has happened to George Lucas' original "Star Wars." And I'm not talking about the "Special Edition" released in 1996.

The movie's extensive back story, existing solely in our imagination for the first 22 years after its release (the revelation that Luke's father was once a gifted Jedi Knight, for example, or that the fascistic Empire was once a democratic republic) now has been packaged into cinema's biggest prequels. Now watching aged Ben Kenobi talk to Luke about his days as a young Jedi in "Star Wars" we flash in our minds to Ewan McGregor's young Obi-Wan dueling Darth Maul in "The Phantom Menace." When Princess Leia talks of her mother on the doomed planet Alderaan, we picture Natalie Portman's Padmi Amidala. And Darth Vader is no longer just the mysteriously evil half-man half-machine of the original trilogy, but flesh-and-blood young Anakin Skywalker of Episodes I-III. It's impossible to watch these characters in the same way.

Because so many were disappointed by "Phantom Menace," it's easy to blame Lucas for indirectly tainting our perception of the originals, for the sense of mystery in "Star Wars" achieved through its allusions to the past is now gone. Still, this isn't fair to Lucas. For starters, the most rabid fanatics of the original trilogy are part of a demographic of adults who were children when the first films came out and had counted on "Menace" to provide a porthole to their childhood. That's not Lucas' responsibility. He made one of the greatest movies ever. We can't expect him to be content creating video games and recording DVD commentary for "Howard the Duck." No one can tell Lucas that he has no right to keep making "Star Wars" movies, just like we can't tell the Rolling Stones to quit touring.

Although the prequels may have changed our perception of the original film, they also shed new light on its greatness. "Star Wars" is the ultimate diversion, a movie universe where the three-dimensional complexities of modern life have been boiled down to essential struggles: David vs. Goliath; good vs. evil. It's a cliché -- and a reality -- that the film is a religion to its fans. And yet at its core "Star Wars" is an old-fashioned thrill ride. After a long cycle of cynical, ironic films in the late '60s and early '70s, the film's exuberance is one of countless ways that Lucas broke the mold.

"Star Wars" arrived just after Steven Spielberg's "Jaws" rollicked movie fans and the movie biz by revitalizing the popcorn adventure yarn, simultaneously inaugurating the era of the wide release and massive box office payoffs. Lucas' film was even more successful; you could say "Jaws" knocked out the old Hollywood and "Star Wars" killed it. But since his film had such unprecedented popularity, Lucas gets blamed for a regrettable industry-wide transformation to the age of blockbusters. Yet as great as the early '70s era of personal filmmaking (that of "Chinatown," "The Godfather," "Five Easy Pieces" and "One Flew Over the Cuckoo's Nest") might have been, if the price for continuing that era were not to have "Star Wars," I would refuse to pay it.

In this publication and elsewhere, the roots of and influences on "Star Wars" have been continually debated. Is it the ancient mythological form seen in works like Homer's "Iliad" and "The Gospel of Saint Matthew" that Lucas' film draws from, or is it the 20th century sci-fi of Ray Bradbury and Frank Herbert? Is it Akira Kurosawa samurai films "Star Wars" most resembles, or Flash Gordon serials? How about Carlos Castaneda or "Buck Rogers," "Quo Vadis" or comic books?

In the end, it just doesn't matter. The important thing is that Lucas distilled these myriad influences into a vision that is clearly all his own. And as New York Times critic Vincent Canby noted in his original 1977 review, "The way definitely not to approach 'Star Wars' is to expect a film of cosmic implications or to footnote it with so many references that one anticipates it as if it were a literary duty. It's fun and funny."

With gargantuan spaceships, a bevy of eclectic aliens and a breathless succession of rollicking adventures, "Star Wars" is a fantasy Lucas made for 12-year-olds. "I saw that kids today don't have any fantasy life the way we had," Lucas says in Peter Biskind's book "Easy Riders, Raging Bulls." "They don't have Westerns, they don't have pirate movies ... the real Errol Flynn, John Wayne kind of adventures. Disney had abdicated its reign over the children's market, and nothing had replaced it ... [so] I've made what I consider the most conventional kind of movie I can possibly make."

To bring the adventures in "Star Wars" to life, Lucas and his team -- which included production designer John Barry, special photographic effects supervisor John Dykstra (who had worked on Kubrick's "2001"), cinematographer Gilbert Taylor and set decorator Roger Christian -- reinvented the special effects industry. Lucas' Industrial Light and Magic, now a longtime special effects leader, was formed in an old warehouse in Van Nuys, Calif., to bring the film's story to life. They built the models that would be seen on screen -- and they built the equipment to make them. It's no overstatement to say that Lucas and his team's leaps in special effects helped revolutionize modern moviemaking. And it isn't just the shots of Tie Fighters, X-Wings and the Millennium Falcon soaring through space that are spectacular. Lucas' camera finds moments of startling beauty, particularly on Tattoine, as Luke Skywalker first dreams of adventure -- sunset from twin stars shining above -- and then, after his aunt and uncle are killed, steels himself for its reality.

The story begins, as all the subsequent "Star Wars" films have, with a massive spaceship crawling into view: This time it's Princess Leia's rebel spaceship, with stolen plans of the Galactic Empire's massive Death Star, running futilely from an Imperial Star Destroyer. In the care of robot droids C3PO and R2D2, the plans are jettisoned onto planet Tattoine where they will eventually wind up in the hands of Luke Skywalker, the movie's reluctant hero. It's in Luke's hands that the "New Hope" of the film's subtitle will, with the help of Kenobi and Han Solo, be realized.

As has been often discussed, "Star Wars" follows a classic mythological template articulated in Joseph Campbell's "The Hero With a Thousand Faces": the call to adventure ("You must come with me to Alderaan," Obi-Wan tells Luke); refusal of the call ("I've got chores to do," Luke protests); supernatural aid (Obi-Wan saves Luke from the Sandpeople); the crossing of the first threshold (surviving the "scum and villainy" of Mos Eisley Space Port); the road of trials (captured by the Death Star tractor beam); the meeting with the goddess (rescue of Princess Leia); the magic flight (attack on the Death Star); rescue from without (Luke saved by Han Solo); and freedom to live (the medal ceremony).

These themes can be found in countless other works, and that's part of the point: Some movies succeed by bending or breaking from traditional storytelling forms; "Star Wars" reminds us why these forms endure. And all these mythological antecedents wouldn't matter if Luke, Han, Leia, Chewbacca, Obi-Wan, the droids and Darth Vader did not have such lasting power as characters, particularly cinematic characters. Luke is the noble young warrior, and Han (said to be modeled after Lucas' mentor Francis Ford Coppola) is the skeptic; C3P0 and R2D2 are comic relief. Not only does rascally Han perfectly balance out Luke's earnest naiveti, but he and Leia make a classic screwball comedy pair, recalling Grant and Russell in "His Girl Friday" or Gable and Colbert in "It Happened One Night." The droids are right out of Laurel and Hardy. Chewbacca is the quintessential sidekick, a Tonto to Han's Lone Ranger. Vader is Nosferatu leading the Nazis. Yet thanks to the actors involved, they are more than just archetypes. For this and other roles, Harrison Ford has come to be called the Humphrey Bogart of his generation; Fisher is superb; and if Mark Hamill is not exactly a master thespian, can you picture anyone else in the role? Lucas has never been mistaken for an actor's director, but under his eye the characters perform with the essential mix of earnestness and humor.

Herein lies one of the biggest keys to "Star Wars": Lucas' genius for balancing the solemnity of its classic good-vs.-evil struggle with an enthusiastic embrace of innocent goofiness. The dialogue and bland anti-intellectualism may seem embarrassingly trite at times; during production Ford famously said to Lucas, "George, you can type this shit, but you sure can't say it." But ultimately, criticizing this movie's dialogue is like saying "Annie Hall" doesn't have enough action sequences, or "Schindler's List" doesn't have enough romance. The dialogue succeeds in diffusing a story that might otherwise take itself too seriously. Lucas knew what he was doing when he wrote cheesy lines like Luke's famous bellyache to Uncle Owen after being commanded to do his chores: "But I was going in to Toshi Station to pick up some power converters!" It's a way of ensuring that the somber weight of this galactic struggle doesn't suffocate us, as "Phantom Menace" and to a lesser extent "Attack of the Clones" and even the critically preferred "The Empire Strikes Back" sometimes do. Campy yet profound, comical yet electrifying, "Star Wars" is exactly what it wants to be -- nothing more, nothing less -- and the way it succeeds within its own limitations is part of what makes it great.

At the same time, "Star Wars" is indeed an old-fashioned morality play. Coming just three years after Watergate and amid the heyday of disco and cocaine, it is both of its time and completely contrary to it -- while ultimately transcending any time period. Surely plenty of movie lovers who cherished the lone-wolf films that had flourished in the earlier part of the decade couldn't help feeling alienated (pardon the pun) by this black-and-white portrayal of good vs. evil. Yet each genre or filmmaking style should make us appreciate the other: Some movies diverge from our traditional moral compass, while others ricochet us back. Having Martin Scorsese and Coppola on one end of the spectrum and Lucas and Spielberg on the other is what made the 1970s such a great movie decade. If one type of movie eventually crowded out the other, that certainly is a shame. But don't blame Lucas and Spielberg if the blockbusters that came after theirs weren't always as good.

In the end, it is the unbridled enthusiasm Lucas brings to "Star Wars" that, no matter how our perception of it may have changed over the years, makes it all but impossible to avoid being swept away. If the prequels of this era don't have that same brilliant simplicity, with their handwriting-on-the-wall sense of galactic doom, maybe it's because Lucas is not the eager idealist anymore, but the sobered middle-aged man who maybe no longer believes so unequivocally that the revolution can be won. If that's the case, it makes the original "Star Wars" all the more priceless.