In Salon's roundup of recent CD releases, Eminem bores, the Hives reinvent garage and Paul Westerberg charges back to mono. 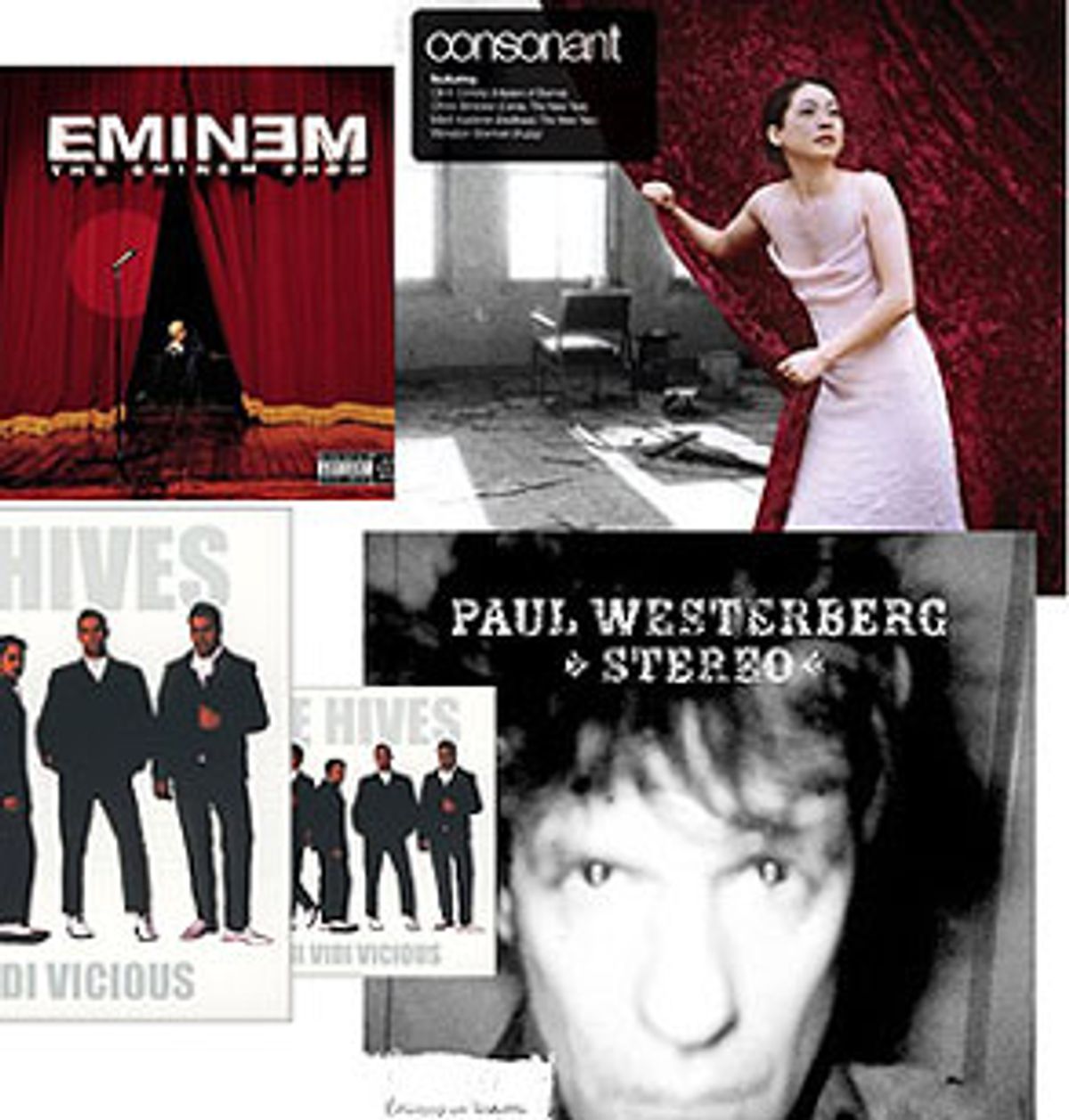 Nothing in popular music gets older quicker than carefully engineered outrage -- just ask Marilyn Manson -- and we're unlikely to hear another platinum-selling album in 2002 that sounds as tired and thoroughly played out as the fourth offering from the troubled young Marshall Mathers.

"[You're] acting like I'm the first rapper to smack a bitch or say 'faggot,'" Mathers raps in that famously laid-back drawl on "White America," his latest bid to simultaneously stake his claim as the voice of his generation (or at least the young, fucked-up, white-male portion of it) and reject the burdens of that title. Me, I vote for his Michigan neighbor, Kid Rock, simply because there's more joy and good humor in his vision of cock-rock rap. While no more original, his pop recycling is somehow more tasteful than the way Eminem apes the misogyny and homophobia of the "real" "streets," an act that wasn't very shocking when Mathers/Eminem's mentor, Dr. Dre, reveled in it on N.W.A's "Niggaz4Life" 12 years ago.

But wait -- I'm falling into the exact trap that Em has laid for us critics, placing undue emphasis on his words at the expense of his music. "I'm just a jokester, saying things to get a rise, and y'all fall for it every time!" he says (I'm paraphrasing, but that's the gist of his argument), and so he once again gives us foul-mouthed insults of easy/obvious or marginal/irrelevant targets (Lynne Cheney and Tipper Gore, Joel Siegel and Moby); violent revenge fantasies about his poor, long-suffering missus, Kim, and bitter spew directed at his lousy, litigious mom ("Cleaning Out My Closet"), in addition to the aforementioned bitch- and fag-baiting.

Yawn. Em is still the rap version of the self-obsessed, solipsistic, angst-ridden-for-no-good-reason 20-something boors fronting all of those Gen Y nü-metal/rape-rock bands, beating their chests during hoary power ballads and growling "Mom and dad divorced! Rarrrggghhh!" like Cookie Monster on 'roids.

So let's do as Emimem asks and forget about the words, shall we? What then are we left with? Well, that celebrated "flow," for one thing, but we've heard it plenty before. Mathers' tongue isn't growing any more nimble with age, and whatever slight pleasure exists in hearing him wrap it around a steady ooze of scatological syllables fades after a track or two. And there are 20 songs on this album, and no Dido to add tuneful relief.

Meanwhile, percolating under our verbose word poet, run the repetitive, transparent hooks of our ol' friend Dre, whose reputation as a masterly producer is one of the greatest cons rock critics have ever perpetrated on their readers. Those cheap synth licks and unimaginative drum-machine grooves have always been nothing more than bad bubblegum. Dre wishes he had a tenth of the creativity of a Max Martin, much less the enduring genius of a Kasenetz/Katz (Ohio Express, 1910 Fruitgum Co., etc.).

Of course, up until now, the kids have been buying this crap by the bushelful, so like his head geek, Mr. Mathers, Dre's been laughing all the way to the bank. But the best tune that either of these guys come up with this time is an extended sample of Aerosmith's "Dream On," and that trick seemed obvious when Run-D.M.C. pulled it in 1986 -- approximately a century ago in pop-music time.

The sophomores who gleefully embraced "The Marshall Mathers LP" are about to graduate from high school now, and they're either heading to college, or bound for the harsh realities of a drudgery-laden minimum-wage workforce. In either case, pumping up the volume as a guy insults "bitches" and "faggots" over kiddie-pop isn't likely to pack the illicit punch it once did. This audience is growing up and moving on, even if Eminem isn't, and recruiting daughter Hailie (or some imitation thereof) for a cameo on the penultimate track, "My Dad's Gone Crazy," doesn't qualify as a sign of maturity. It's just the most obvious example of sheer desperation on an album that pretty much reeks of it.

Nineteen years is a long time to wait for parole, much less a record, but Consonant don't disappoint. This nominal debut marks a belated return to recording by Clint Conley, bassist for Boston's quasi-legendary and long-defunct Mission of Burma. (Defunct, that is, until this year's first-ever reunion shows.) From 1979 to 1983, Burma combined harmonic sophistication then rare for the underground with sonic chaos comparable to their loudest contemporaries (Black Flag, Hüsker Dü). Since then, drummer Peter Prescott has fronted several like-minded outfits (Volcano Suns, Kustomized), while guitarist Roger Miller veered into experimental composition and silent-movie accompaniment. But beyond appearances on Yo La Tengo's first album and one mid-'90s 7-inch with Miller, Conley has kept his own counsel.

Conley's best-known songs with Burma ("Academy Fight Song," "That's When I Reach For My Revolver") were full of stirring, if ill-defined, political portent. These new songs are resolutely personal, focussing on romantic entanglements and suffused with decidedly un-punk longing and regret. Largely derived from poems by Holly Anderson (who co-wrote Burma's "Mica"), they're closer to the sensuous particularity of Janet Frame or Elizabeth Smart than to run-of-the-mill of rock lyrics: "Flocks of birds rose out of the heat in my pelvis and flushed chest." The album's power depends on Conley's success in fashioning memorable melodies from potentially unsingable material; its single strongest hook is built on the unlikely line, "John Coltrane's 'My Favorite Things,' over and over." Conley's own lyrics are drier, but equally vivid: "Walk me through your catalogue of love/Couplings, triplings, underthings, and toys."

The music itself is rarely as jarring as vintage Burma, but the performances are raw and dense enough to appease the faithful. Conley's well-chosen sidemen (Come's Chris Brokaw, former Bedhead and current New Year guitarist Matt Kadane, Boston-area bassist Winston Braman) are a big help, as is the uncluttered production by Shellac's Bob Weston; the collective storm that caps "What A Body Could Do" should satisfy anyone who doesn't hate electric guitars on principle. Wisely balancing instantly hummable material ("Blissful," or "The Kiss," a variant on "Mother's Little Helper") with slower-to-register numbers ("Details of Attraction"), this would be a terrific album whether it had been made by the unknowns down the block, Julian Casablancas' press agent or (as it happens) an unexpectedly re-energized cult hero.

"Got out way late in 2008," singer "Howlin'" Pellee Almqvist sings on "The Hives Declare Guerre Nucleaire," the opening track on "Veni Vidi Vicious." "Let's do it all again in 2010!"

Originality is overrated in rock. The late critic Lester Bangs, champeen of all things garage, famously drew a line from "La Bamba" by Ritchie Valens through "Louie Louie" by the Kingsmen, "You Really Got Me" by the Kinks, "No Fun" by the Stooges, up to the then-current "Blitzkrieg Bop" by the Ramones. "There: twenty years of rock 'n' roll history in three chords, played more primitively each time they are recycled," he wrote. But those dependable fuzz tones never get tired, so long as they're accompanied by a propulsive backbeat, maximum adrenaline and a modicum of melody, and Sweden's Hives have all of that.

The Hives arrive on American shores with a fair amount of hype (no less an arbiter of hip than Courtney Love has declared them "better than the Strokes") and an awful lot of shtick (the matching playboy suits; the names -- the other members have pseudonyms like Nicholaus Arson and Vigilante Carlstroem -- and the silly conceit that instead of Arson writing all the material, it's contributed by a mysterious, never-seen sixth party named Randy Fitzsimmons). Don't let any of that distract you from the fact that this disc (which has been out in Europe for some time, but is only now being picked up for broader distribution here) burns like Ben Gay applied to a sensitive spot for which it was never intended.

"Punk-rock music avec kaboom!" the boys cheekily call it, carefully avoiding the "New Garage" tag being applied to the likes of Detroit's White Stripes, New York's Mooney Suzuki and Seattle's Catheters. But garage is what it is, a direct descendant of Lenny Kaye's "Nuggets" compilation of '60s one-hit wonders, marginally talented meatheads who took to their basements with Sears Silvertone guitars, slavishly imitated the Beatles and had a fleeting brush with fame before moving on to careers as district managers for Thom McAnn Shoes. But there's a key difference from '80s garage revivalists like the Fuzztones, the Fleshtones and the Chesterfield Kings: The Hives aren't so super-serious about it all.

Yes, these Swedes know and appreciate rock's past. But they don't wish it was 1966 again -- they're happy to be living in the present, thank you very much -- and their sonic mix boasts as much Nirvana (who also borrowed the same three chords) as Electric Prunes, Amboy Dukes and Thirteenth Floor Elevators. All of which may be unduly straining to justify the fact that tunes like "A Get Together to Tear It Apart," "Main Offender" and "Supply and Demand" are potent enough to prompt any lover of this stuff to jump around like a gleeful idiot. And I dare you to try to refrain from indulging.

When the Replacements started their decade-long run in the '80s, they quickly moved from sloppy garage punk to slightly more refined pre-indie rock. As the band gained with the burgeoning college radio crowd, their volatile music reflected in the act's live performances. That made going to a Replacements' show a gamble: They were drunks, which could mean that you'd get a slobberingly great show, or a sloberingly bad show that the band could barely finish. Rebellious until the end, the band finally imploded in the early '90s, way before they burned through their ability to make good music.

Replacements frontman Paul Westerberg's fourth post-break solo album, "Stereo/Mono," relives the untamed, emotional delivery that made the Replacements so great -- minus the surrounding drama. The liner notes to Mono (Part 2 of the two-disc set) admit, "This is rock 'n' roll recorded poorly, played in a hurry, with sweaty hands and unsure reason ... It feels right. This is in my blood." Stereo, on the other hand, is a collection of work that spans a two-year period of writing and recording at Westerberg's home. It was "cut mostly live in the middle of the night, no effort was made to fix what some may deem as mistakes; tape running out, fluffed lyrics, flat notes, extraneous noises, etc. Many were written (or born if you will) as the tape rolled. Unprofessional? Perhaps. Real? Unquestionably."

The results are two CDs that brim with primitive optimism, as the music shuffles between naked, moody pop (Stereo) to gritty indie rock (Mono) -- like the Replacements, but with half the noise on hold. The mistakes are obvious -- songs grinding to a halt, Westerberg's voice straining a little too hard -- but overall, the rough patches only add to the discs' charm.