A Senate committee plans a new hearing to ask the FBI director: What went wrong? 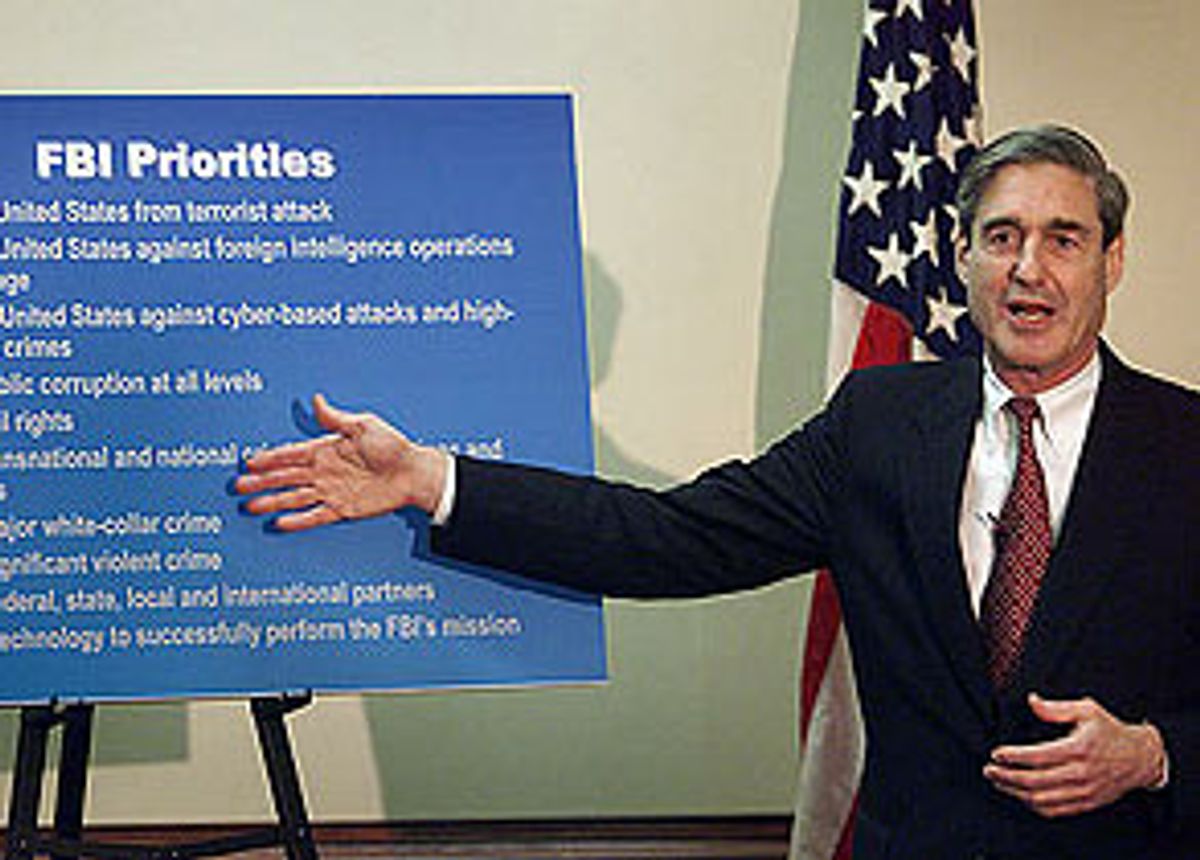 FBI Director Robert Mueller chose a congressional recess to introduce plans to reorganize his beleaguered bureau. But enough Republicans and Democrats were still around Wednesday to plot additional hearings next week to press Mueller about the FBI and what they see as its possible recent failings.

Plans aren't yet final for next week's public Judiciary Committee hearings but, sources say, they are expected to focus on Mueller's new proposals as well as on continued questions over the so-called Phoenix memo. In that memo agent Kenneth Williams suggested that FBI headquarters should look into possible terrorist infiltrations at American flight schools. They will also review Mueller's plans to fundamentally shift the FBI's mission from a more traditional police agency to a domestic intelligence and anti-terrorism force.

Committee sources also expect the hearings to highlight a memo from Minnesota FBI field officer Coleen Rowley to Mueller stating Rowley's "deep concerns that a delicate and subtle shading/skewing of facts by you and others at the highest levels of FBI management has occurred and is occurring."

Indeed, June promises to be a busy month for Mueller on the Hill. Next week the joint House-Senate Intelligence Committee will begin its long-awaited hearings into the Sept. 11 attacks. Those hearings are expected to begin behind closed doors, with the first public hearings set for the week of June 24. The witnesses at the first public hearing are scheduled to be Mueller and CIA Director George Tenet.

A spokesman for Sen. Bob Graham, D-Fla., chairman of the Intelligence Committee, says that no agenda or witness list has been set for the closed-door hearings, but that they will likely be made available as the date approaches.

But the focus has increasingly been on Mueller since last week, when Rowley's memo, which places Mueller himself in the middle of the FBI fracas for the first time, was leaked to the press. By way of rebuttal Wednesday, Attorney General John Ashcroft offered a spirited defense of the embattled director. "On September the 4th, 2001, Bob Mueller took the oath of office as the director of the Federal Bureau of Investigation," Ashcroft said at Wednesday's press conference, highlighting the fact Mueller was on the job for only a week before the terrorist attacks.

Ashcroft went on to give a brief rundown of Mueller's résumé, reiterating his wide bipartisan support during Senate confirmation hearings, and his war record, including Mueller's Bronze Star for fighting in Vietnam. "There is a difficult job ahead," Ashcroft said. "Bob Mueller is the right man for that job. He has a mandate for change from this administration. This battle-tested leader will execute his mission. This reformer will overhaul the FBI."

Mueller has come before the Judiciary Committee before, on May 8, just days after word of the Phoenix memo had hit the press. At that meeting, Mueller faced tough questioning from Sens. John Edwards, D-N.C., Dianne Feinstein, D-Calif., Richard Durbin, D-Ill., and others.

The FBI director was defensive at times, pointing out that while the lack of action after the Phoenix memo and requests from the Minnesota office for warrants to look into Zacharias Massaoui may have constituted problems with the FBI bureaucracy, it does not follow that, had action been taken, the FBI would have been able to prevent the Sept. 11 attacks.

"I should say in passing that even if we had followed those suggestions at that time, it would not, given what we know since Sept. 11, have enabled us to prevent the attacks of Sept. 11," Mueller told the committee. "But in the same breath I should say that what we learned from instances such as that is much about the weaknesses of our approach to counter-terrorism prior to Sept. 11."

Those "weaknesses" were among the things Mueller sought to address with his announcement Wednesday about changes within the FBI. Mueller announced plans to hire 900 more agents, and shift an additional 480 to focus on counter-terrorism efforts. The changes come as part of an effort to refocus the FBI on more domestic intelligence gathering and counter-terrorism efforts while handing much of the traditional police work off to local authorities. Mueller called the changes "a shift from reactive to proactive work" for the bureau.

But many of Mueller's toughest interrogators on the committee are taking a wait-and-see approach to Mueller's announcement. Staffers for Sens. Edwards, Feinstein and other Judiciary Committee members said their bosses would not comment on Mueller's press conference today, but would have plenty of questions for the FBI chief when he returns to Capitol Hill.

Other members of the committees, including Sen. Richard Shelby, R-Ala., Specter and Graham, have been more overtly critical of Mueller in the wake of the recent revelations from Phoenix and Minnesota. But they say it is simply a tough-love approach that is solving some of the deep-seated cultural problems within the bureau.

"Fundamentally, there's a hope and desire for Director Mueller to get it right this time," said Paul Anderson, Graham's spokesman. "The real proof will come in the performance of the bureau under this new structure."

This week's dust-up over the FBI and its director caps a month in which the politics of Sept. 11 have finally come to the forefront. It comes after revelations that President Bush was briefed last August about possible hijackings involving al-Qaida, and many Democrats, including House Minority Leader Richard Gephardt, D-Mo., evoked the old Watergate question, "What did the president know, and when did he know it?" That debate dissipated after an aggressive counterpunching effort by the White House.

And the climate has turned particularly political, if not exclusively partisan, on other issues regarding the war on terrorism, including a looming showdown over the future role of Homeland Security Advisor Tom Ridge.

Most senators agree that Ridge must be a key part of the solution to improving domestic security. Many Democrats say while Ridge is doing the best he can, he has effectively been deemed impotent by President Bush, who refuses to make Ridge's position a Cabinet-level post.

Last week, the Senate Governmental Affairs Committee passed a bill co-sponsored by Sen. Joe Lieberman, D-Conn., Specter and Graham that would make the Office of Homeland Security a Cabinet post. The bill passed the committee on a straight partisan 9-7 vote.

"Ridge is attempting to do the best he can with the tools he has available," Anderson says. "But he really needs statutory authority in order to have the clout to get agencies with different missions, different cultures, to cooperate."

The White House has been tightlipped about whether or not it supports making Ridge a member of the Cabinet. Ridge himself is expected to weigh in when he makes his recommendations on domestic security to the president on July 1. Sources in Ridge's office say they expect the White House to announce its plans for security -- including Ridge's future status -- by the end of the summer.

"I'm sure Governor Ridge, as director of the White House Office of Homeland Security, has done everything within his power to make this nation safer, but in the months since his appointment it has become clear to many of us, and perhaps even to him, that he lacks the necessary authority to accomplish what needs to be done," said Lieberman earlier this month. "This job requires administrative teeth, but as currently configured, it is likely to get bitten by the existing bureaucracy."