"The Sum of All Fears" pretends to be a serious exploration of nuclear terrorism, but it's really nothing more than warmed-over Cold War paranoia. 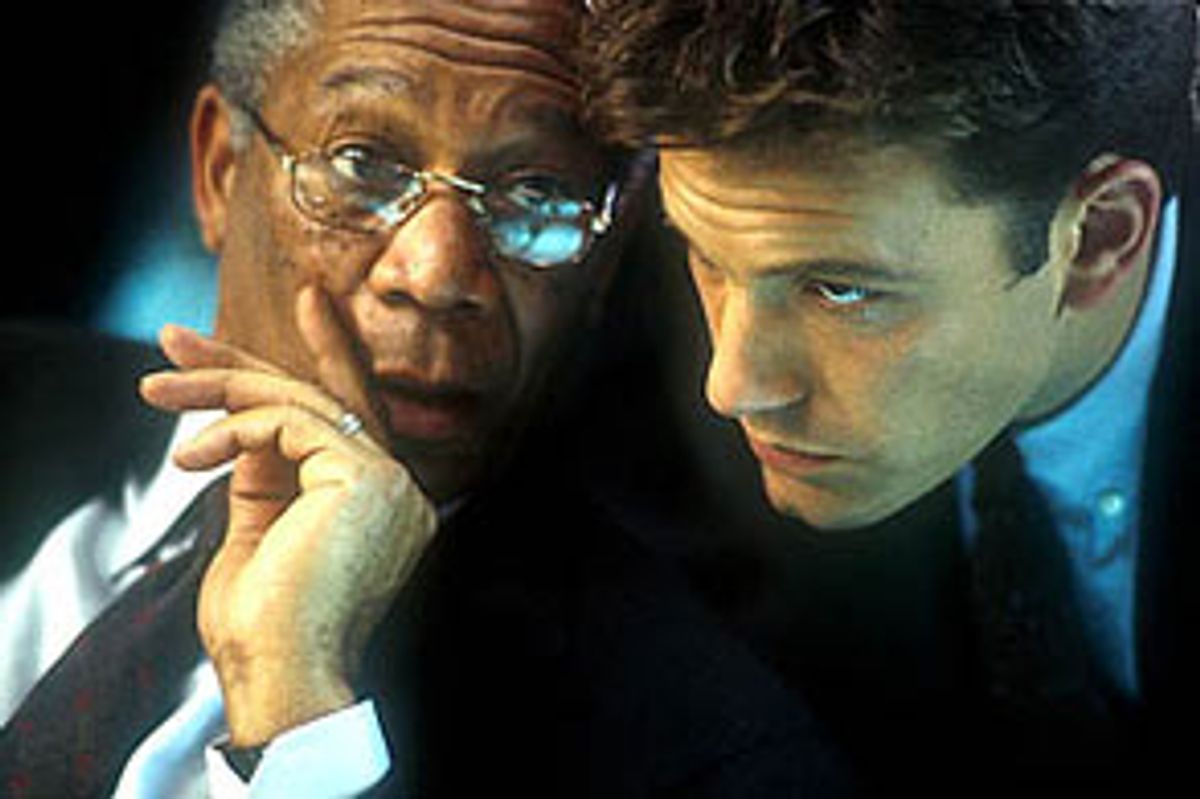 After Sept. 11, magazine and newspaper editors and the producers of TV and radio talk shows were obscenely eager to get film critics and movie industry insiders to pontificate on how the terrorist attacks would change movies. Editors and producers, whose jobs depend on sniffing out trends, have never understood that trends are not the same thing as real change. Focused on increasing readership and ratings, they want to react to events as they happen. Thought is secondary.

It didn't matter that movie production and release schedules are decided months in advance and that we would still be seeing movies that had been made or begun before Sept. 11 for a year or so after the event. They don't want to know that it sometimes takes months, or even years, for changes and the reasons behind those changes to become apparent. The people who run the print and broadcast media wanted sage-sounding "think pieces" before the dust had even settled in New York and Washington and Pennsylvania. I know of one editor who decided that "Monsters, Inc.," "Harry Potter and the Sorcerer's Stone" and "The Lord of the Rings" proved that Hollywood was now retreating into comforting fantasy in response. She wasn't deterred by the fact that all three of those movies had been completed before the terrorist attacks.

That's why the smartest people asked to prognosticate on how Sept. 11 would change movies admitted they didn't know -- or just didn't say anything. They realized that this event was too serious to turn yourself into another talking head over (or writing head, if that makes any sense). If it's possible to say that anything has changed at this early date, it's not so much movies as the spin around them. When Warner Bros. decided to postpone the release of Collateral Damage," in which a firefighter goes after the terrorists who have killed his family, the star, Arnold Schwarzenegger, went on talk shows to support the studio's decision, saying it wasn't the right time for people to see the movie. By the time the movie was finally released in early spring, Schwarzenegger had switched modes, telling interviewers that audiences wanted to see Americans triumphing over terrorism.

Spin is the reason that a stiff, dour, unimaginative spy snoozer like "The Sum of All Fears," the latest installment of Tom Clancy's Jack Ryan thrillers, is being sold as a serious and "timely" piece of filmmaking. That's how it appeared to be taken by some of my colleagues at a New York press screening last week, and I can only guess that, for them, it touched a nerve. But if there's anything disturbing about "The Sum of All Fears," it's how the same old crap can achieve topical cachet.

"The Sum of All Fears" deals with a plot by terrorists to pit America and Russia against each other and, with the superpowers in shambles, step in and take over. It's a device familiar from previous spy pictures and espionage fiction. And the fact that Sept. 11 happened doesn't mean that it need never be employed again. Nobody is now likely to watch a 007 movie where Bond is working to defeat some supervillain's scheme for world domination and feel that it's uncomfortably close to real events. At the time I saw "The Sum of All Fears" I was happily reading one of Peter O'Donnell's Modesty Blaise thrillers in which terrorists plot to blow up the Golden Gate Bridge at rush hour. There was nothing in the book's good-guys-vs.-bad-guys plot that now felt callous.

I'd never argue that entertainments or commercial pictures can't deal with serious issues. (The best contemporary crime fiction addresses the question of how people choose to live in a world defined by violence. And the best espionage writers -- Eric Ambler, Geoffrey Household, John le Carré and, currently, Alan Furst and Joseph Kanon -- manage, within their entertainments, to give a sense of the complexities and contingencies of international conflict.)

But when reality has outstripped fiction, a movie that claims to be working above the level of a mere thriller -- a movie that trades in images of mass destruction -- now needs to be operating at the highest possible level if it's going to be something besides exploitation.

About an hour into the picture, the terrorists, a group of fascists working under the direction of their Nazi leader (played by Alan Bates), detonate a nuclear bomb in the middle of a Baltimore football stadium. The disaster images come suddenly and quickly: glass being blown out in a hospital, a landscape being reduced to dust, a helicopter being jolted out of the sky by shock waves. The director, Phil Alden Robinson ("Field of Dreams"), doesn't linger on them. He doesn't pump up the destruction with dramatic music. The only injured we see come later, in a few brief scenes in hospitals and first-aid tents. Robinson's approach is tasteful, but only as tasteful as a thoroughly unconscionable piece of moviemaking can be.

"The Sum of All Fears" isn't a serious attempt to deal with our vulnerability to terrorism, or to address how established channels of power can bring us to the brink. It's the same damn Tom Clancy picture that's been churned out since "The Hunt for Red October," as humorless and gray and dour as its predecessors. There are good actors everywhere you look in "The Sum of All Fears": Alan Bates, Colm Feore, Ciarán Hinds, Philip Baker Hall, Ron Rifkin, James Cromwell, Bruce McGill, Lisa Gay Hamilton. But we might as well be watching Lloyd Nolan or Whit Bissell or any number of bland, anonymous character actors who populated military and sci-fi films of the '50s and '60s. (I guess Hal Holbrook was otherwise engaged.)

Of all these people, only Liev Schreiber manages to give a performance, bringing some snap and rhythm to his line readings. (I'm beginning to suspect that Schreiber is incapable of giving a bad performance.) If your idea of a good time is a bunch of boring men in suits sitting around conference rooms discussing possible military responses, the picture is hog heaven. It's a movie for people who aren't ready for Clausewitz but who have graduated from Stratego and the 3-D version of Battleship.

What distinguishes "The Sum of All Fears" from the other Jack Ryan movies isn't that this time Ben Affleck has taken over from Harrison Ford -- who took over from Alec Baldwin -- as a younger, single Ryan. (The running gag is that national business keeps Ryan from canoodling with his new sweetie, played by Bridget Moynahan.) Instead of wise CIA wonk, Ryan is here an unproven young Company analyst who wins the favor of the agency director (Morgan Freeman, in his dull "official" mode of acting). The real difference is that this time, the filmmakers can point to a terrorist attack actually having taken place on American soil as proof of its doomsday veracity. That's a godsend for the self-serious tone Clancy movies always take. And with Clancy himself acting as one of the executive producers, he can ensure that the "urgency" of his scenarios is accorded the proper respect.

Since "The Sum of All Fears" fails as drama, one must ask whose idea of entertainment this is. I've never enjoyed movies that portray the end -- or the potential end -- of the world. At least when you see destroyed cities at the end of George Pal's and Byron Haskin's 1953 film of "The War of the Worlds," images of the Taj Mahal or the Eiffel Tower in ruins, the filmmakers treat them with the gravity of seeing something sacred annihilated. They aren't there simply for a thrill, the way they are in "Armageddon" where Michael Bay cuts to the destruction of a city whenever he wants to charge up the audience. That "The Sum of All Fears" aspires to something beyond Bay's frank whorishness, that it claims to be giving us the destruction of Baltimore for something above entertainment, makes it worse, more dishonest.

If the reactions of my colleagues are any indication, and if the fact that, in some cities, Paramount screened rough cuts of the movie for critics to start beating the drum for its high purpose, then "The Sum of All Fears," whether or not it's judged a failure, is going to be treated as if it were a cautionary tale along the lines of "Fail-Safe" or "Seven Days in May." Whatever the faults of those movies, they were still made with a certain seriousness of purpose and a certain relevant plausibility.

Liberals who've been turned off by Clancy may take to the movie's depiction of the United States and Russia as still being so suspicious of one another that they almost launch World War III. But to buy into "The Sum of All Fears" you have to believe that the Soviets -- sorry, the Russians -- still pose an enormous threat. Defenders may point to the report that, following the Sept. 11 attacks, Russian President Vladimir Putin wanted to convey to Washington that Russia had nothing to do with them. Did anyone, in or out of Washington, entertain the possibility for a minute? Despite the movie's use of neofascist terrorists, it can't resist trading in the hoariest Cold War clichés.

The solution the movie proposes for the blinkered view of those in power is more and better intelligence, and this may give the movie even more cachet. The headlines of the past few weeks make the failure of our national intelligence-gathering operations impossible to deny. But if you saw Tom Clancy interviewed by Judy Woodruff on CNN on Sept. 11, the glibness of that solution may not sit so well. What was Clancy even doing there? Well, Woodruff explained, he'd written a novel envisioning this scenario. (So did every other espionage writer, from the first-rate ones to the hacks. Would CNN have welcomed the writers of DC comics to discuss whether Superman could have prevented the attacks?)

Clancy spent his time assuring Woodruff that what we were seeing was due to the gutting of American intelligence because of the reporting of the liberal media. What was offensive wasn't his position that, whatever the cause, American intelligence wasn't doing its job. It was the smugness with which Clancy delivered the message. He was beyond such human emotions as shock or outrage or devastation. The dead weren't even cold and he was converting them to political capital, proof that he was right. What linked Clancy's response to later responses to Sept. 11 by his political opposites, like Susan Sontag and Noam Chomsky, was the absolute conviction that they could have foreseen this all along, that nothing in it demanded a new way of responding or any rethinking of assumptions.

The clumsiness of "The Sum of All Fears" lies less in such hoary devices as a muffled cellphone being the only way to access the director of the CIA at a crucial moment. It has to do with a moral clumsiness, the way it reduces the most serious of topics to a strategy game. Robinson even blows what could have been a stinging moment, modeled on a famous scene from "The Godfather," in which the various superpowers deal with their respective enemies. It's presented for the audience to cheer, instead of advancing the notion that our safety means accepting the idea that our intelligence services will have to carry out some dirty deeds.

And if the filmmakers think they've treated the nuclear destruction of an American city with sufficient seriousness, they may be in for a surprise. When the inevitable bootleg videos of "The Sum of All Fears" make their way to the streets of the Middle East, I'm sure that the depiction of superpowers so bumbling they're ripe for terrorists, and the sight of Baltimore going kablooey, will warm the heart of any al-Qaida member who gets his hands on one.