At long last, Hollywood got the funk! Eddie Griffin is the black man's answer to Austin Powers in this delightful farce. 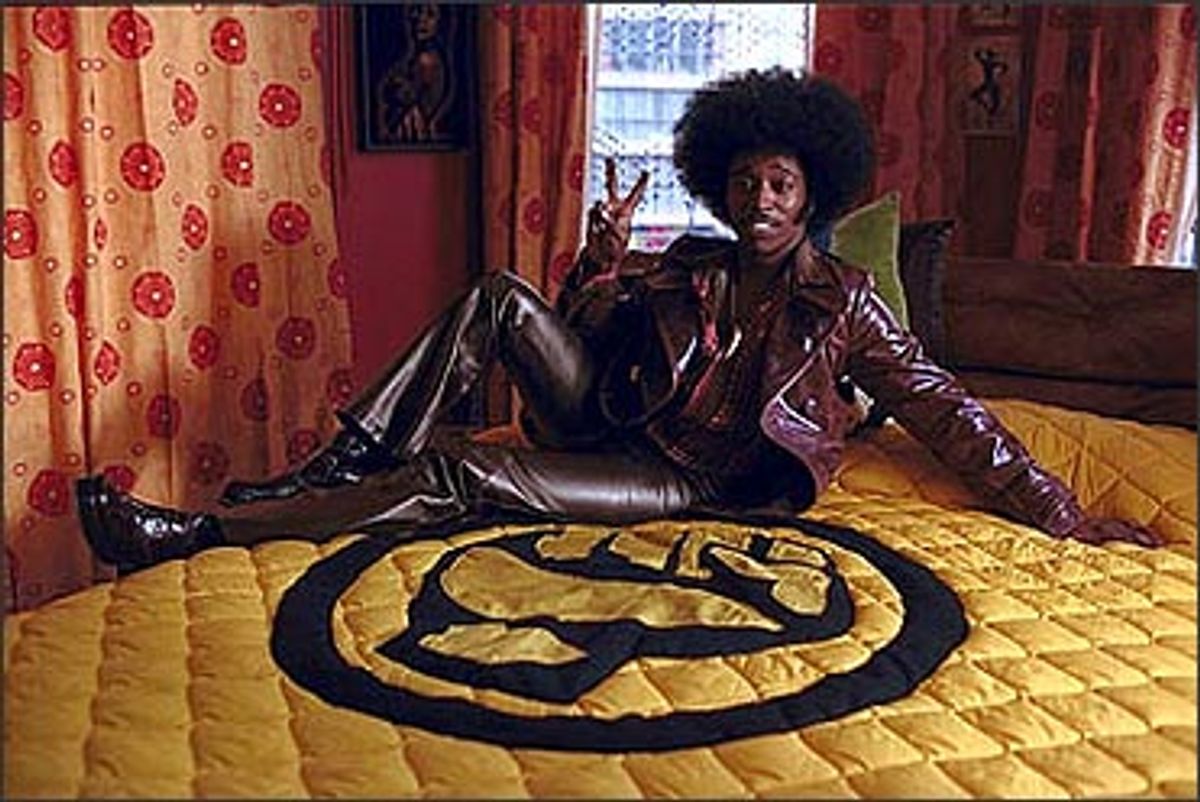 "Undercover Brother" isn't so much a spoof of '70s blaxploitation movies as it is its own smart, hilarious (and sometimes cutting) entity -- its funky raffishness is hard to resist. When we first get a look at Eddie Griffin as crime fighter Undercover Brother, we recognize him immediately as a lavish cartoon in his mile-high Afro and buttery eggplant leather jacket trimmed with sharp piping. He's driving smoothly but recklessly in a gold Cadillac convertible, taking hairpin turns without spilling a drop of the orange Big Gulp he's holding in his nondriving hand.

Undercover Brother is the spiritual twin to Austin Powers; like Mike Myers' fabled superspy, he represents the gold standard of exaggerated stereotypes. We never get tired of looking at him or his outfits -- he's the culmination of everything we love about pop culture when it reaches its boldest, most beautiful extremes.

"Undercover Brother" has no plot to speak of, but that's hardly a liability: It simply means there's no pesky story to get in the way of its magnificent gags, which follow one after the other with astonishing consistency. Written by John Ridley (who wrote the script for "Three Kings" and also conceived the Internet cartoon series on which "Undercover Brother was based) and directed by Malcolm D. Lee ("The Best Man"), "Undercover Brother" is light and swift and stealthily intelligent; it's the kind of racial humor (not to be confused with racist humor) that completely ignores race divisions, leaving no group unskewered.

This is a movie that explodes the racist shorthand that we see everyday in a world where well-meaning liberals and closet bigots alike sometimes find themselves bumbling their way through the forest of racial awareness. One of my favorite jokes in "Undercover Brother" features two cheerful, robotic newscasters who evaluate an African-American political candidate by praising his attributes: "He's so well spoken!" one says. The other notes how well he's doing in the polls -- "And not just in the urban areas!"

That's the kind of joke that's subtle enough to make you feel you're not being banged over the head, but not so subtle that it can't make an audience howl. But then, even though the best comedies are always about something more than the sum of their gags, the gags matter too. "Undercover Brother" is a joyful mix of high and low humor, pulled off with style and an eye for glamour (Danielle Hollowell deserves special praise for her costumes; she's the high priestess of fitted snakeskin).

The setup is clever in itself: A nefarious underground group, headed by The Man, has launched a scheme to control the minds of people everywhere, starting with that previously mentioned black politico, Gen. Boutwell (Billy Dee Williams). The extremely popular Boutwell is just about to announce his candidacy for the presidency. But by the time The Man's evil henchman, Mr. Feather (the devilishly funny Chris Kattan), gets to him, he has decided instead to open a chain of fried chicken restaurants. Luckily, an organization known as the B.R.O.T.H.E.R.H.O.O.D., led by the Chief (Chi McBride), has been tracking The Man's activities, and seeks the help of Undercover Brother to stop them.

Even the names of the characters in "Undercover Brother" are a spoof: They're descriptive but impersonal, a witty jibe at the way it's always the black guy whose name you never learn who gets eaten by the dinosaur in movies. There's Conspiracy Brother (David Chappelle), whose chief activities consist of smoking weed and concocting ever more outlandish examples of how white folk have suppressed and ripped off the black man. There's Smart Brother (Gary Anthony Williams), who carries a storeroom of knowledge in his brain, including the historical facts to knock down some of Conspiracy Brother's claims with one blow. There's Sistah Girl (Aunjanue Ellis), who slinks around in a variety of fabulous disguises and is the single most efficient member of the B.R.O.T.H.E.R.H.O.O.D. crew. And then there's White She Devil (Denise Richards), The Man's secret weapon bombshell (she's referred to as "Black Man's Kryptonite"), a pouty sexpot who's equally alluring whether she's wearing librarian glasses or white leather that fits like latex. The whole cast keeps the jokes running smoothly; I can't recall a minute where "Undercover Brother" ran aground. Ellis plays the straight woman to the comics around her, but she always maintains a memorable presence, and she suffers no bullcrap. Richards plays along wonderfully, both in her scenes with Ellis (there is, of course, rivalry between the two, particularly since Undercover Brother finds them both sexually irresistible) and with the guys she holds in her spell; she's a game and exceedingly relaxed performer.

Chappelle's Conspiracy Brother gets some of the funniest lines, as when he learns that Undercover Brother has actually slept with White She Devil. "Is it everything I ever dreamed of?" he asks pleadingly, before he remembers that he's not supposed to be remotely interested in white women. Chappelle's deadpan proclamations about white poaching of black culture make the recurring joke funnier and funnier instead of wearying.

Meanwhile, I found myself wondering if Undercover Brother's outfits would be coming to a store near me, in unisex sizes. And how could I not? Griffin's performance radiates stylishness. He's hilarious when he serves a misguided stint as a wannabe white boy (White She Devil drags him shopping, dropping big bucks at a store called Khaki Republic). But when Undercover Brother comes to his senses and slips back into his regular wardrobe, replete with platform shoes and a belt buckle with "UB" spelled out in turquoise chips, he's his truest self. He's ingenious, too: He knows how to fling dual Afro picks to pin the sleeves of baddies to the wall, rendering them helpless.

I'm dying to describe the movie's almost-final image, but I don't want to spoil anyone's pleasure by giving it away: Set to Cheryl Lynn's "Got To Be Real" (the movie's soundtrack is a funk and disco gold mine), the sequence is wonderful and ridiculous at once, a marvel of goofy ingenuity and a blessed reprieve for anyone who ever defended the aesthetic qualities of well-cut bell-bottom pants.

There's a sequence in "Undercover Brother" in which Chris Kattan, who is supposed to represent the enemy of black people everywhere, finds his butt twitching to Mary J. Blige's "Family Affair." The deep, dark secret that "Undercover Brother" unearths is that, yes, there are many, many white Americans who are secretly or otherwise ashamed of how uncool their color makes them. Why wouldn't we want to steal clothes, music, style -- in fact, a whole culture -- from the black man? It's so much better than a lot of the stuff we invented ourselves. "Undercover Brother" reshapes and re-forms clichés as a way of reveling in the notion of culture envy. Once you go black, you'll never go back. And you shouldn't even try.