Can Moby save pop?

Anointed by the desperate music media as pop's new king, Moby brings electronica to the masses with "18." (Now if only he would stop trying to sing.) 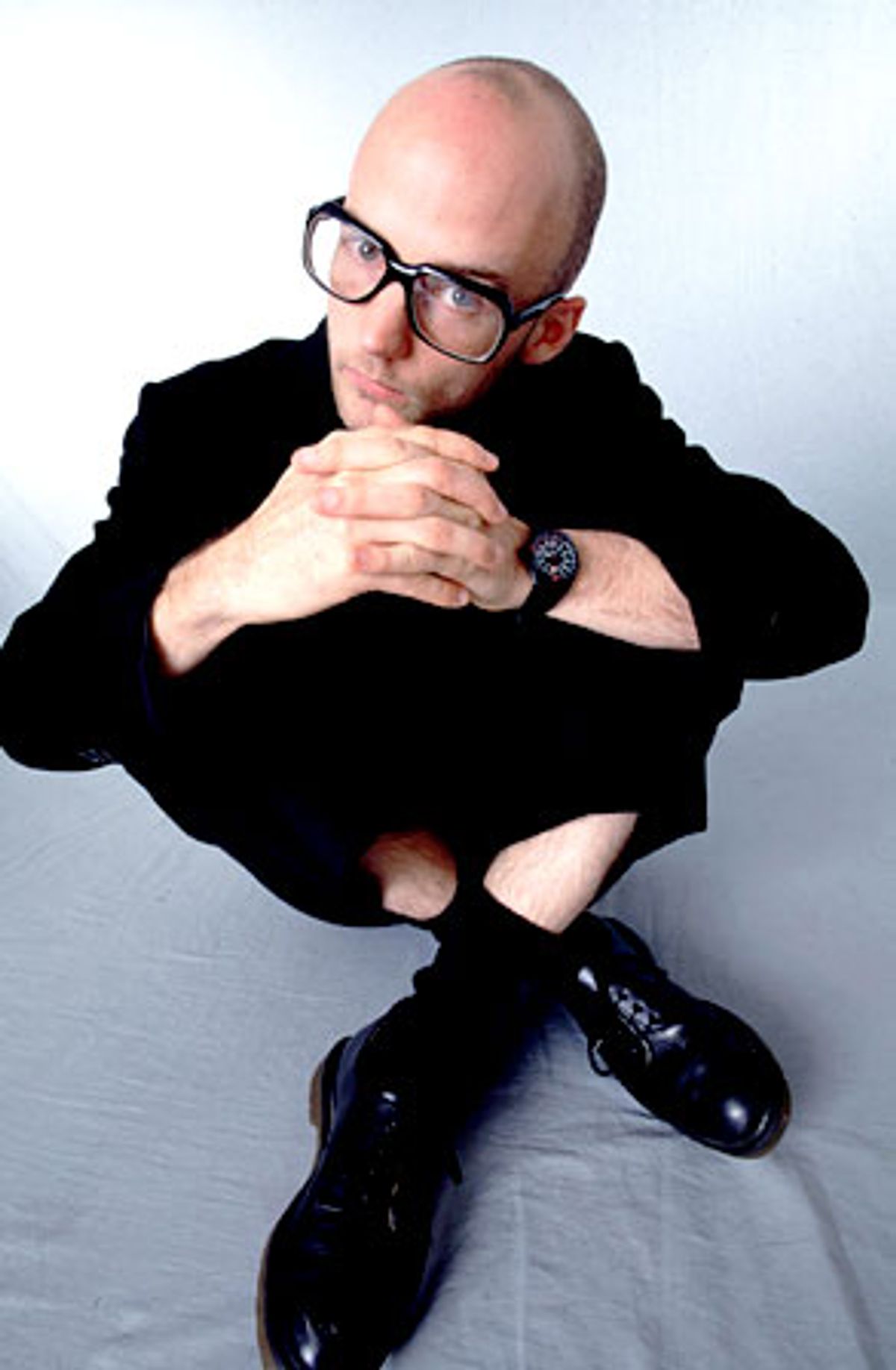 Many of the reasons this is currently Moby's moment have little to do with the music on his new album, "18." There was a vacancy in the hip new thing department, and Moby, fresh from the sales triumph of "Play," was a decent if awkward fit. The media's newly rapturous embrace of the bald, bespectacled electronic music veteran -- he's recently been on the cover of the New York Times Magazine, Spin, Wired and Entertainment Weekly (next to David Bowie) and was profiled on CNN -- suggests just how little else is going on in the mainstream music world. Teen pop is going into merciful decline, above-ground hip-hop is being smothered by its own bling-bling clichés and the hysterical condemnations of Bill O'Reilly simply aren't enough to convince anyone that there's any oppositional energy left in the short-attention-span theater of rap-rock. The field is wide open.

So now, with nearly every scrap of vitality leached from the dance music scene that Moby helped pioneer, he's getting his quarter-hour of public veneration. It's not that he doesn't deserve it; despite the reflexive dismissal of too-cool dance music purists, Moby is simply better at what he does than the hordes of hipsters working in the same vein. Many of the tracks on "18" are very good. A few are sublime. "At Least We Tried," a heart-splitting ballad of failed love with caressing vocals by Freedom Bremner, is the loveliest song I've heard this year. The advance acclaim for "18" isn't undeserved (at least not entirely), it's just weirdly late, as if journalists had discovered punk in 1984.

Yet at the same time, part of the reason electronic music is currently so anemic is because its defining ideas have already been absorbed into the larger culture, finally making it ripe, after more than a decade, for the genre's first true crossover artist. Electronic beats and loops are now thoroughly integrated into MTV-land, from the Neptunes' dirty rhythms on Britney Spears' "I'm a Slave 4 U" to the high-tech effects by Sly and Robbie and William Orbit on No Doubt's "Rock Steady." In that sense, Moby is less an ambassador for an alien genre than a member of a club whose rules he helped create.

Along with hip-hop, electronic music elevated the producer to artist status. At the same time, as hip-hop and electronic artists collaborated, traded cameos and remixed each other's songs, they broke down rigid models of pop authorship. Pop stars could no longer be divided into bands and soloists. Instead, they floated about, joining together for an album, a song or a moment in a song. The idea that a track like "Harbour," on "18," could be sung by Sinéad O'Connor but credited to Moby is no longer strange. Vocalists on "18" include Angie Stone, MC Lyte and the Shining Light Gospel Choir, but it's clearly a Moby record. (Still, it's not surprising that the relatively weak "We Are All Made of Stars," on which Moby himself sings like a proper pop star, was the first single).

Partly, the attention being lavished on "18" is a response to the media's failure to anticipate the tidal success of Moby's last record, 1999's "Play," which surprised everyone by selling more than 9 million copies. By combining old field recordings of roughly incandescent African-American spirituals with crystalline electronic production, Moby brilliantly updated the house music formula of recycled diva vocals and disco beats.

Beyond that, "Play" radically changed the way music is marketed. As Gerald Marzorati reported in the New York Times, every song on "Play" was licensed to a commercial, TV show or movie at least once. By insinuating itself into the very fabric of the culture rather than blazing forth into the public eye, the music became ubiquitous in a whole new way, as did Moby. He's always been interested in soundtracks. "Go," his first hit, looped music from "Twin Peaks," and he took a crack at the James Bond theme for 1997's "Tomorrow Never Dies." His 1997 record "I Like to Score" was a combination of music he made for films like "Scream" and "The Saint" and soundtrack-derived songs like "Go." Suddenly, with "Play," he'd created what sometimes seemed like the soundtrack to the entire world.

As amazing as the repercussions of "Play" were, Moby has said that he's never aspired to do anything new. On "18," he doesn't. Instead, "18" distills the most influential down-tempo electronic music of the '90s into a record as smooth as beach glass. Some songs recall early Massive Attack, while others channel Air and Beth Orton's collaborations with William Orbit. The celestial strings and aquatic pings on the title song are pure Craig Armstrong, while the gospel loops of "In My Heart" and "One of These Mornings" could have been on Moby's own "Play." "18" is an alchemy of soul and new wave, with elements of hip-hop and disco. Conceptually, there's nothing novel here, which is why on the surface Moby's sudden ascendance into the limelight seems random.

Like "Play," "18" is distinctive without being original, in that it represents the final transformation of an underground sound into pure pop. "Play's" ubiquitous "Porcelain" -- featured in the film "The Beach," Nordstrom ads and several TV shows -- took the dreamy cascades of groups like Hooverphonic and polished them to a high gloss. Like Massive Attack and Stars, Moby's music contains myriad currents of darkness, but it's darkness of a significantly different, more marketable kind.

Instead of Massive Attack's struggling weariness on songs like "Protection" and the gut-churning dread of tracks like "Sly" and "Angel," Moby's blackness is pristinely romantic. It makes despair seem beautiful and noble rather than creepy. While you listen to it, the world takes on a sepia Sunday cast. "Sleep Alone" was originally a song about a couple dying together; in the wake of Sept. 11, he changed the lyrics to make the meaning more elusive, but the pain in it is still of the most rarefied and delicious kind.

That's not meant pejoratively. It is certainly true that Moby has done more than anyone else to lift electronic music out of the underground. But that underground had long since stopped being a vital or interesting place. If "18" is more accessible and lustrous than the vast majority of electronic music, that's partly because Moby is oriented toward the mainstream, and partly because he's an impeccable producer. Electronic music is so easy to make that it drastically lowered the bar for anyone who wanted to call themselves a musician; the resulting homemade simplicity defined the aesthetic but also limited it. Moby is a genuine pop composer who happens to work electronically. He's slicker than most of his peers, but he's also more talented.

At least, he's talented as a producer. Fame has ruined him in one way: He now insists on singing. Moby's voice is a thin, brittle thing. It doesn't even come close to the kind of ugly beauty of a Stephin Merritt or a Leonard Cohen, who somehow sing amazingly without being amazing singers.

The last time Moby sang this much was on his disastrously received 1996 rock record, "Animal Rights." This time, he takes the lead vocal on four songs, and while they're processed enough to be enjoyable, the tracks where other people sing are so superior that it's hard not to be disappointed whenever his voice appears. He's like Quentin Tarantino, who can't act yet insists on casting himself in otherwise good movies.

Yet just as Tarantino couldn't spoil "Pulp Fiction," Moby's croaking doesn't ruin "18." The record is familiar territory for anyone who's been listening to electronic music for a while, but then again, the fetish for musical novelty (as opposed to musical skill) is what fueled the underground's manic trend cycles and ultimately exhausted the genre. People can blather about selling out and cashing in, but just as Tarantino, however annoying he may be, remains an exponential improvement over, say, Jerry Bruckheimer, Moby's music beats almost everything that's on the radio. This album will probably be the soundtrack of the next "18" months. That that's a pleasant prospect is the most important thing about it.