Who was she to kill herself? If anyone deserved that bullet, I did -- a bitter fool in a wheelchair. 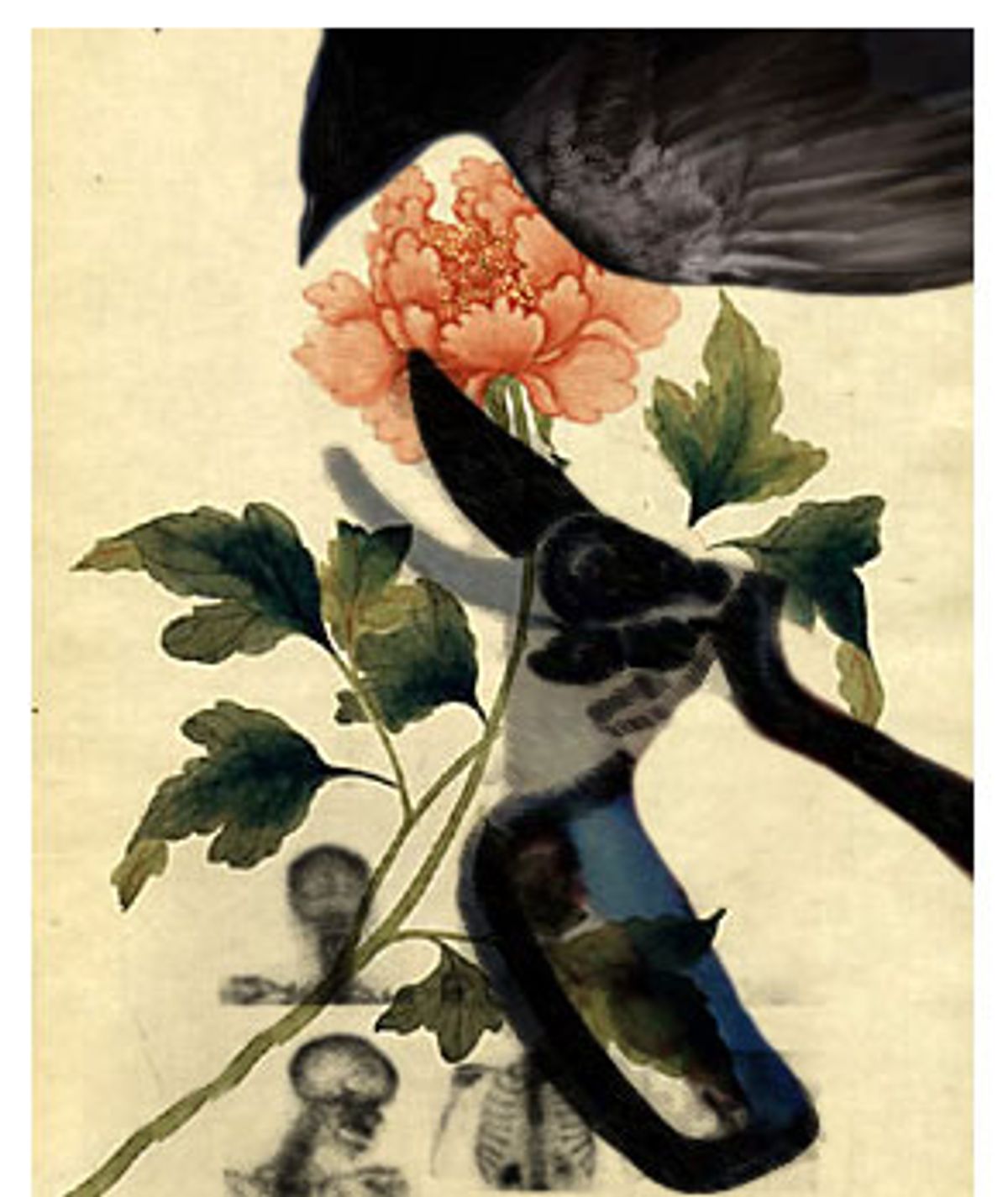 I had never spoken with anyone ready to eat a gun until the day I told a woman that the price of car insurance quadrupled after a drunken driving conviction.

I peddled insurance and I didn't much like my job. I was a cynic, trapped by lies, drenched in disrespect, and angry with myself for choosing an easy job that paid good money rather than seeking work that might challenge me.

I had even thought about riding a bullet out of this world, but it wasn't because of insurance. Insurance wasn't important enough.

It's easy to sell insurance because most people magnify their fears. But most people also hate the insurance industry because they believe no one should profit from trouble. I understood the hate and refused to let it touch me. I had convinced myself the service I sold was useful enough in the grand scheme of life.

Don't think the lies I'm talking about were my own. I never lied about insurance. I didn't care enough. The lies I hated came through the door and over the telephone and piled up on my desk. I believed nearly everyone would lie to get the best of an insurance company.

Lie to get a better rate: "No, I never drive that car to work. And my son doesn't live with me anymore."

Lie to inflate a claim: "Yeah, when they broke into my house they took a real valuable camera collection."

I once met with a customer who killed herself after telling me the truth.

The woman bustled into the office late one Friday afternoon. She said she needed car insurance and needed it quick. I ran down the usual questions. When I came to the one about license suspensions, she replied, "Yeah, that's a problem. I got my license pulled for drunk driving. The judge says I've got to buy insurance before I can get it back."

That kind of story wasn't new, and I had learned not to be judgmental. In fact, I appreciated her forthrightness. It made my job easier. I laid out the procedure. No recriminations. Just hard facts. The money, the time frame, the hassle with the state.

People come to an insurance office thinking it's going to take maybe a paycheck or two to get out of that sort of jam. They're always wrong. A highway patrol officer hauls them off to jail. A clerk pulls their driver's license and takes the bail money. But I was the guy who told them the nasty combination of alcohol and car keys meant they were going to be spending two or three years and two or three thousand dollars climbing out of the trouble they bought by the bottle.

"Oh God," she said. "I don't have that much. And I gotta have my license by Monday so I can get to work."

I have forgotten the woman's name. She was 30, maybe, but her face is hidden now in the shadows of my memory. She was slender, with dark hair down to her shoulders, dressed in jeans and a denim jacket. Ask me now and I'd say she was hard used, too diffident and beaten down for a woman so young.

I wish I had looked more closely into her eyes. Despair is difficult to hide. Maybe one word from me would have deflected the demon bearing down on her. I wonder now if she blinked, or sighed, or if her shoulders slumped. I can't remember.

God forgive me, I didn't care much about her or her problem. I was willing to do my job, politely and thoroughly, but I wasn't going to get involved. I operated with my own brand of misanthropic karma. You drink, you drive, you get caught, you pay.

I like to think I would have been kinder and less businesslike had I known -- that I would have listened better. Maybe I would have offered her a cup of coffee and let her talk out her frustration.

I learned about her suicide when the police called the next day to trace her steps. What I remember most now about that phone call is the electric buzz of apprehension in my gut. I felt guilty, for no other reason than I had apparently been one of the last people to speak with her. The questions from the police were few, and my answers, I suppose, were satisfactory. But I never mentioned the anger and guilt ricocheting around my psyche.

"Stupid silly woman," I said aloud as I put the phone down.

It seemed then, and it seems now, a thoroughly pointless thing to shoot yourself over car insurance. Surely the mess surrounding her DUI conviction wasn't the only thing that made her think a bullet to the brain was the right choice. It had to be something more than a couple of years of high premiums and administrative paperwork. I remember sitting, watching the traffic clamor along the edge of the park opposite our office, after my conversation with the police.

"Sitting" is the word that drives this story, for at that point in my life I had spent 20 years using a wheelchair. I was an expert at crippled logic and a heartless bastard if someone attempted to compare his problems to mine. As far as I was concerned, if I could make it through the day without sticking a shotgun in my mouth, no one who could walk had any right to blast a permanent hole in their troubles.

It takes a twisted intelligence to combine arrogance with self-pity. I did it mostly by punching walls when I was alone, and cursing the mirror. I did it by thinking about the Winchester Model 12 in the closet but never touching it. I did it by being the happy crip in public, deflecting patronizing pity with funny replies dipped in sarcasm.

"Oh, I admire you so," someone would say. "I don't know how you stay so cheerful." I couldn't walk, but I was a good actor. My dirty little secret was that I was angry with the world, angry enough to think about killing myself, and too chicken to pull the trigger.

And so the woman was dead by her own hand, and there I sat, mixing a sour brew of guilt, anger and pity.

I looked across the street, watching the young mothers and children in the park, life in full flower. I thought of the broken soul bound for the grave. Was I envious of her? Remembering that question now makes me wonder if I was as out of touch with reality then as she had been when she raised the pistol to her head. Life can be lived, fully and joyfully, on your feet or on your butt, but it took me a while to discover that truth.

The funny thing is, had it been me instead of her who'd gone home to a bullet, there wouldn't have been the same kind of fuss. The police viewed her suicide as a mystery, a possible crime. Reporters questioned her neighbors and co-workers.

Standing over me dead in my wheelchair, the cop would have simply shaken his head and said, "Poor guy."

Oh, my family wouldn't have liked it, of course. But when the story appeared in the newspaper, there would have been nods of understanding rather than eyebrows raised in puzzlement. "People like that have it tough. I'd rather die than live the rest of my life without walking." After all, we live in a society where people with disabilities are too often perceived as victims rather than valuable human beings, a society where Peter Singer will discuss your utilitarian value and Kevorkian will manage your pain with lethal injections.

I have received too many pats on the head and heard, "You poor thing..." too many times not to understand the hard reality of living with a disability. If I sit and smile, I am patronized. If I sit and cry, I am pitied. Anywhere I appear in my wheelchair -- even at the wrong end of a shotgun -- I am defined first by my disability.

Dear God, that stinks of self-pity.

And the truth is, any pity I had for myself burned away long ago. Somewhere on my journey I learned only a glorious fool rages in the face of fate. Now I am married to reality, for better or worse. I expect to live or die by the choices I make, suffering only from my own carelessness or stupidity.

I think I'm alive because I'm an odd combination of cowardice and curiosity. Or maybe it's because depression and despair didn't pull the guts out of me. I've always had the idea that something interesting might happen the next day, even if it hurt to face the sunrise. And I never got over the fear of the abyss when I looked into the black hole of the shotgun barrel.

I am older now, with nearly all of my certainties pared away. I have watched people die. I have known people killed -- by others, by circumstance, or by themselves.

And I have listened, sitting bemused and skeptical at the edge of mortality, as the discussion of suicide has moved from whispers of grief and accusation to proclamations about a right to die.

And I remember the time when a day didn't pass that I did not think of killing myself. That was a time when I was stronger physically and weaker emotionally, a time when I loved no one, least of all myself, a time when I had been given a right to live and wasted my time thinking about dying.

That was long ago, and I still remember the woman who sat across from me, shadowed by the evening light streaming in through the doorway, depression eating away at her soul like a cancer.

All I know is life. All I know is to cling to it, to celebrate its joys and comprehend its sorrows. And I know despair can kill you.