We hung the most dimwitted essays on the wall

The biggest case against standardized testing might be the people who score the tests -- people like me, for instance. 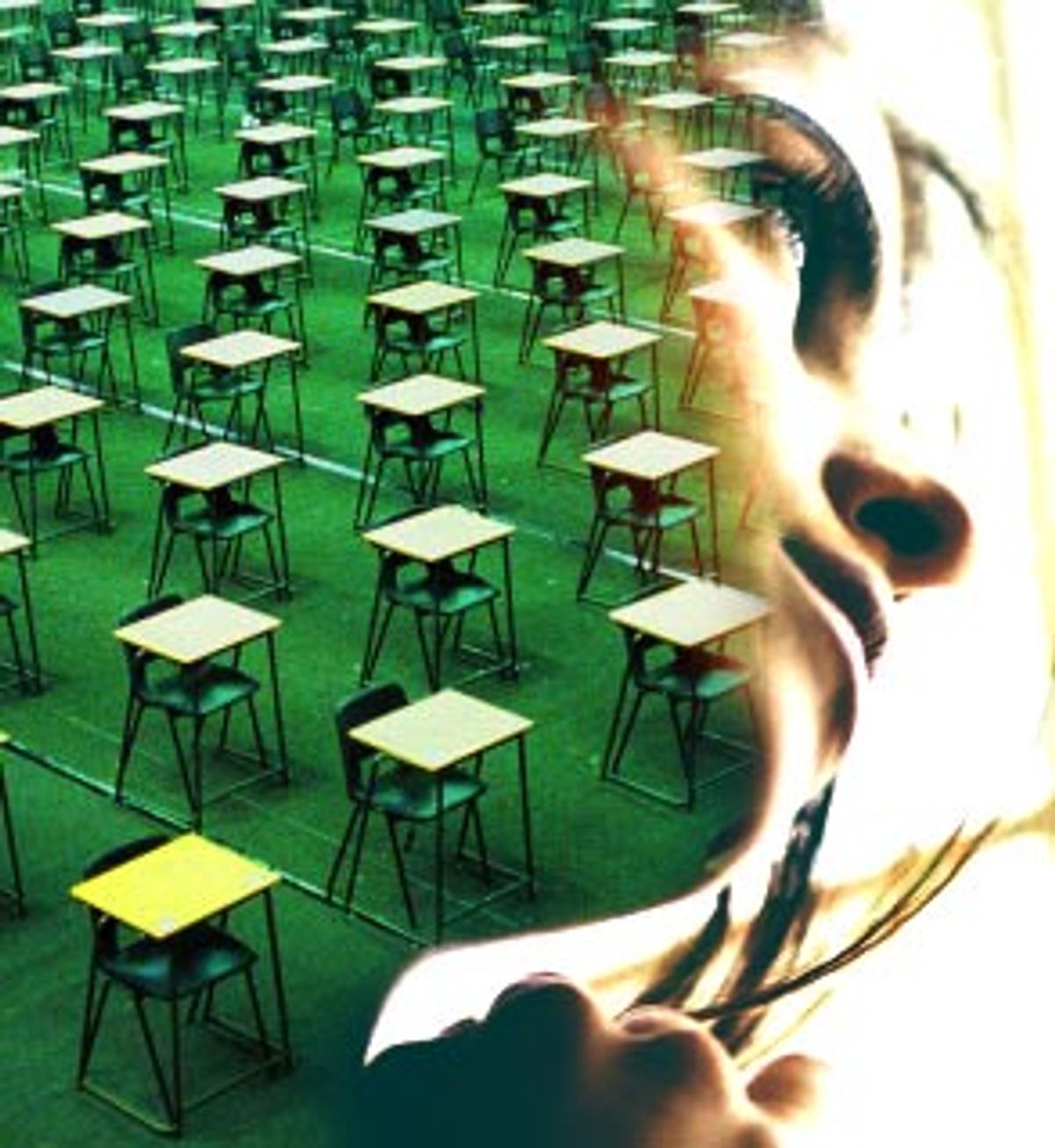 I always tested well. Amid the tedium of worksheets and rote reports, I welcomed a standardized test, because it was something different. It would not affect our grades, and we couldn't "fail," our teachers assured us. It was just "to see where we were at." Today, a standardized test comes with a lot more pressure, especially for 12th graders. In many states, if you don't pass the test, you don't graduate. And if you do pass the test, but the company your state hires to grade that test screws up, you also don't graduate.

In the year 2000, 8,000 Minnesota students flunked a test they actually passed. The company the school district hired to grade the tests erroneously down-scored them. Fifty of these tests belonged to seniors, and for them this was a life-changing screw-up, derailing college admissions, graduation parties and the chance to stand in cap and gown with their classmates. A year later, another test-scoring company mis-scored 1,800 tests in Pennsylvania. In a few weeks, we'll surely hear about this year's blunders.

I read these news stories every year around graduation time. I pay attention, because I've taken these tests, and for one brief summer, I scored them. And that experience led me to believe with absolute certainty that standardized tests are an utter waste of money and valuable teaching time, and that they measure nothing more than a state government's willingness to waste money.

Like many of my friends, I left college approximately as unemployable as I'd been when I arrived. My degree was in English, which qualified me to continue my previous summers' employment at Dairy Queen, where I had perfected the classic loop-de-loop soft-serve cone. Instead, I ended up scoring public-school students' standardized tests. It paid a dollar more per hour, although I'd have to bring my own lunch. "Grade student essays! Be a part of the education process!" the ad in the classifieds had said. Most exciting of all, "Must possess college degree; submit proof of graduation at interview." Someone aside from my mother actually wanted to see my diploma! This document and my Sallie Mae loan repayment coupon book were the only proof I had of my college smarts.

The ad spoke right to me: "English and art majors a plus!" But it wasn't that the company wanted to hire people who stirred to the music of great literature and art. It was simply that art and English majors were the only graduates who would be grateful to make $6 an hour.

The interview was a little like jury duty. I appeared at the required time. I twitched in a room with 20 or 30 people until my name was called. An intake person photocopied my diploma and assigned me to the Georgia Basic Skills Test. I was asked to report to work the following Monday. That was it. I did not have to interview, network or submit a résumé. I did not need a background in K-12 education. I did not need to care about or understand children, although it was obvious I'd been one, pretty recently.

The case against standardized testing generally pits the kid against the test. The criticisms are familiar by now: Is it fair to put a kid under the stress of a test? Are standardized tests really an accurate measure of anything a kid knows, or needs to know? Do tests give unfair advantages to white kids, well-off kids, kids from suburbs?

But no one talks about the real inadequacy of the standardized testing process: the relationship the kid, the testee, had with me, the test scorer. I was underpaid, treated without dignity and reminded daily that I was disposable -- and I held the power to affect the lives of thousands of kids.

We were English and art graduates, musicians, displaced tradespeople and telemarketers. Some of us were so spectacularly sociopathic that we could find no other work. Some of the scorers had earned their degrees in prison. There was a tense and hostile woman who worked as a freelance bookseller, evidently not making a living at it. There was a teacher -- just one -- waiting for her real contact with kids in the fall. If she hated children as much as she seemed to hate adults, her students were in for a miserable year.

We mingled at lunchtime and learned a bit about each other, and cliques formed, just like in school. I became good pals with an unemployed meter reader who regaled me with thrilling tales of garbage houses, basement shrines and naked housewives until one day he simply never showed up -- whether his choice or the company's, I never knew.

We were hired to score the tests children took in the spring, and the work would last through the summer, maybe into the fall, depending on how fast we worked. Each test was scheduled for a two- or three-week time frame, and if we finished early, we'd go home without pay until the next test started. That encouraged us to dawdle. If we were going too slowly, the test administrator would urge us to burn through the remaining tests extra quickly. Easy enough for us, but unfair to the kids we were speed-scoring. But we were used to unfair.

We did not have benefits and rarely got 40 hours a week. We were hired for only one school district's test at a time, meaning possible unemployment was never more than three weeks away. And we could get dropped, at any time during a test, for any reason. Every day, someone was. But if we came back for more the next summer, we'd get a 25-cent raise.

The state of Pennsylvania paid the Minnesota-based test-scoring company I worked for $12 million to score a two-question essay test. Here's what that money bought: Two hundred or so $6-an-hour test scorers for a couple of weeks; photocopying fees to give us all copies of the tests on pink-and-blue paper; overhead costs on a water-damaged building with no air-conditioning that had recently been abandoned by the telephone company. Oh yes, and lawyers' fees, when the test turned out to be mis-scored.

Machines scored the fill-in-the-blanks tests; we scored the essay questions. We scored third graders from Iowa in the morning and 12th graders from South Carolina after lunch. Each day, I read hundreds of tests. Each question got no more than 30 seconds of my attention, although some took less -- kids routinely left whole tests or questions blank. I tried not to think about the panic or sense of futility that must have overwhelmed these kids. Fortunately for us, there were always five hilarious morons for every sad kid stricken with mute panic. If a child was particularly funny, or especially dim, his or her test was posted in the hallway for entertainment. There were hundreds of them, and we'd file along the hall and hoot over them during lunch.

Each test was a little different. Kids would either answer questions based on a short, boring reading, to test for comprehension, or they'd get a free-write question that would test writing skills and ability to answer simple questions like "Describe the best gift you ever got."

Brains wear out after reading hundreds of identical descriptions of Nintendo games: They really rocked, they were really cool, they were exactly what I'd always dreamed about in my most wildest dream I'd ever had about the best Christmas of my whole life, so far. That was about all anyone had to say about Nintendo, and very few kids seemed to get anything better or anything different than that. Maybe once a week I'd get a puppy or a bike. We scorers would start out each fresh test eager to give each kid the best score they could reasonably expect. But after a few hours or days or weeks, we'd sleepwalk and skim and assign scores sort of randomly. It was hard not to.

We'd look forward to lunch, when we could go outside and breathe fresh air and lie spread-eagle on the lawn in good weather. After lunch, we'd look forward to suicide threats. We each had a yellow stack of Post-it notes, which we were to apply to essays that hinted at abuse or suicide. It was thought that the anonymity of the test would allow troubled kids to admit to us what they could not tell their friends, teachers or parents. When we found such a kid, it was like finding a prize under a Coke bottle top. The other scorers at our tables would light up, and we'd pass the essay around until a manager caught us.

In late July, I was assigned to score the Alabama test. I sailed into my half-hour training and prep session without concern. But something was a little different about this test. I can't remember what it was now, but I raised my hand to ask the trainer a question. She looked at me, and then she snapped. She ripped the Pucci scarf off of her neck and began to wave it at me, berating me for "challenging" her, and causing me and the other trainees to inch our chairs away from her in confused shock. Her curly hair worked itself into Medusa-like formations as her head waggled. This was a bona fide nervous breakdown, and it ended only when she fired me.

Her managers were sympathetic to me, and my co-trainees backed me up -- I'd done nothing wrong. But all the other tests were filled, and the work was dwindling for the summer. They didn't really need me -- in fact, they were looking for ways to weed out a few more scorers, so I was sent home. And that was OK. I have never been so happy to leave a job, and I'd worked at McDonald's in high school and washed dishes in the cafeteria in college.

A month after I was fired, I took the Graduate Record Exam. I'd decided to go to graduate school, mostly to stave off my student loans. When I went to the restroom to pee before the test started, I could hear a woman crying in the stall next to me. On the side, another was vomiting. I suddenly understood how scary and nerve-wracking testing can be.

We all understood that the kids behind the tests were real, and we never intentionally tried to screw them. But discomfort, resentment and tedium no doubt caused our minds to wander and our scores to get sloppy. Subtle pressure from our co-workers, or open pressure from our managers, caused us to rush through the tests. We were underpaid and poorly trained and none of us was qualified to be scoring those kids.

I want to say I never let the clock or the weather or the monotony of reading the same uninspired responses hundreds of times get in the way of being able to give each child the best score possible. I want to say I thought about the kids, cared about each child behind each pink-and-blue test packet and gave them the most fair and generous score possible. And most of the time, I did.

Amy Weivoda is a writer living in Minnesota.