"Blue Velvet" was and is an outrage. And a masterpiece. 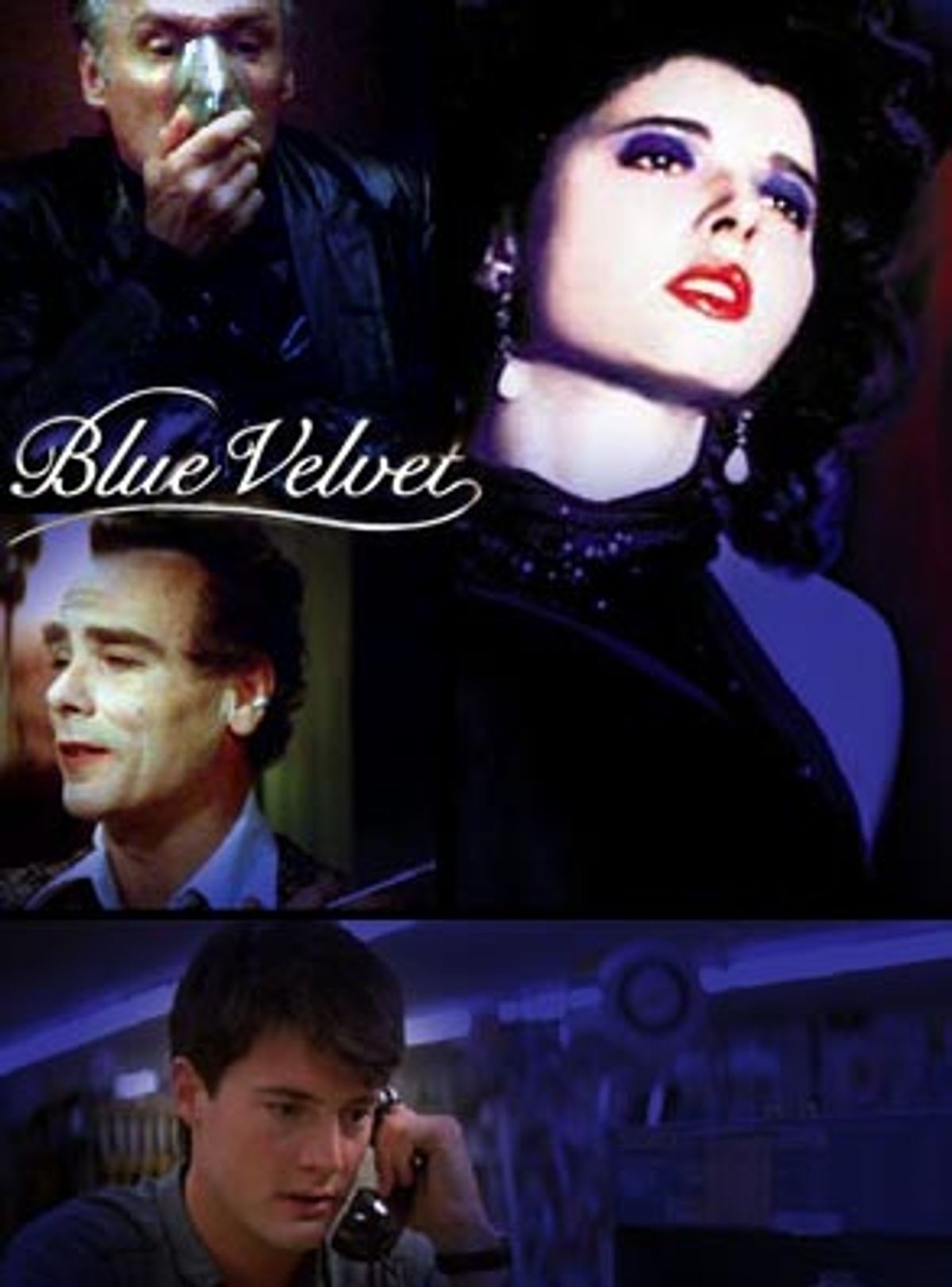 The shocking thing about modern movies is how quickly the shock wears off. I remember when I took my wife to "Alien" in 1979 and when guess-who came out of John Hurt's chest, demanding a little attention, she had to leave the theater in distress. Yet a few years ago, our son watched "Alien" with me and was reckoning the outrage to Hurt from a technical point of view. It was how did we think they did that, nothing about whether it was decent or kind for them to have thought of doing it. You can see the same slippage in us, and the things once known as our sensitivities, all over the place. Meanwhile, in this greatest of the great nations, there is what amounts to an academic discussion over whether and when torture can be used with terrorists. So it goes.

But I wonder, still, whether with its heralded DVD release, "Blue Velvet" will still send some of us in search of the Valium. Not that anything you might expect to find in a "re-release" will actually be there. There is talk of scenes that were cut or omitted from the original, but apparently they amount to nothing more than sketchy reports and vaguely suggestive stills. The footage itself is lost. As other recent events have made clear, this is a culture that cannot keep clerical control of its outrages.

My estimate of David Lynch is that he never really allowed anything that he wanted to be cut. He's far too clever, and far too capable of assuming a mask of innocence. The censors we possess always have trouble with that kind of person. If you come on childlike, they find it hard to think the worst of you, no matter that their nerve endings are screaming "PANIC!"

Something like that happened when "Blue Velvet" opened in 1986. This really was a film that some otherwise sane people felt bound to attack as "indecent," "improper" and "dangerous." And in this case, I have to say, every promise in those grim warnings was rewarded. "Blue Velvet" was and is an outrage. And a masterpiece. It is one of the few films in the last 20 years that has kept alive the capacity of the movies to deliver beautiful offense, to dig so deep into the psyche that you feel you've been operated on without anesthetic.

People still ask how they should handle "Blue Velvet," and I like to say, just sit there, feel it, look at it, feel wrapped in it -- what else would you do with blue velvet? In other words, just as with Lynch's most recent film, "Mulholland Drive," don't get yourself in a state of fierce readiness, don't be prepared to wrestle with the film. Let it take you. And people say, you mean ...? And I say, yes, of course, just sit there in the dark and let it surround you, and ... But that is really scary, they tell me.

So, if you insist on being active (as opposed to someone experiencing a dream), you could regard it as childlike: Jeffrey (Kyle McLachlan) is a good little boy who is going to do some naughty things but it's all in the cause of growing up -- which is what we're supposed to do, isn't it? And, after all, when a lad finds a severed ear early in the morning, who knows how the day is going to turn out? An ear, just lying there on the ground, is a very strange thing -- so carnal, so cut or torn away, so unexpected. It's like a good little boy looking down and seeing the great jungle that has grown between his legs all of a sudden. I'm alive, he says.

And he thought he lived in a perfect, picket-fence, red, white and blue little town, a slice of Americana, where everything was going to be all right. Red, white and blue is a good place to start, if you ask me. Because it's not just the secure image of a settled and great country; it's pretty colors, too, isn't it? Until the red, white and blue becomes the red of blood, of lipstick, of the head of a penis or the warm interior of a woman's body; the white is the livid hue of all that exposed skin; and blue? -- blue is the coolest, the color of veins beneath the skin, the color of early decay and the color of bruising.

And just like a flag at night, Isabella Rossellini -- the blue velvet lady -- will rear up out of the dark, stark naked but for her hopes and fears, and she is all of them, red, white and blue, and she is the bad thing that will not go away, she is the horror of growing up. Oh no, I never told you that you would not be frightened. In fact, the more I listen to your miserable whining, fucker, the more I begin to wonder whether even now you're ready for "Blue Velvet."