My girls live and breathe hoops with a passion that carries us beyond the season into moments of frightening uncertainty. 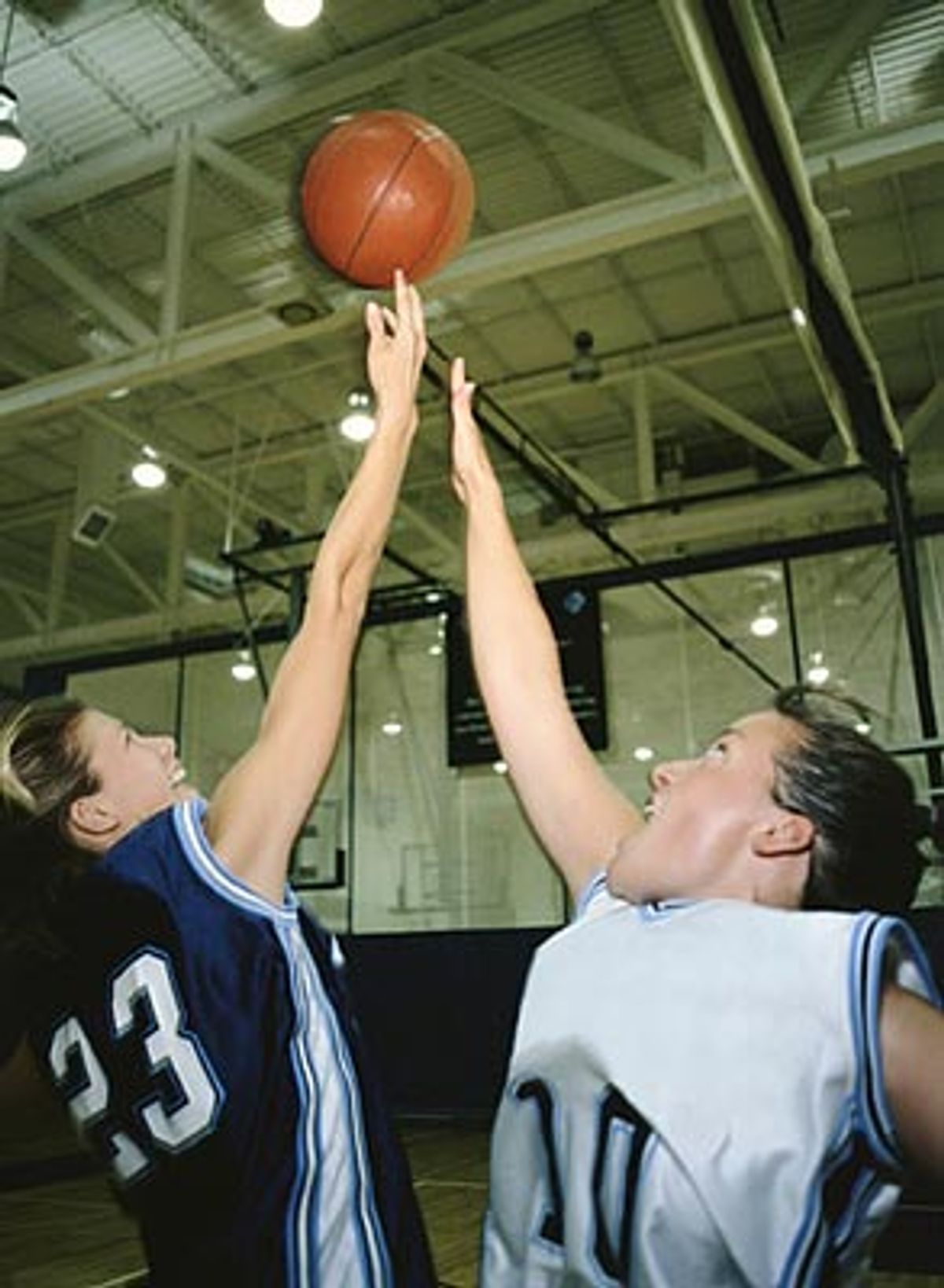 "Dye will be injected into your bloodstream so we can see how fluids are traveling in and out of your brain," the MRI technician said to my 12-year-old daughter. Gaila endured skull surgery more than a year ago to correct a slight malformation present at birth, but now she was having severe headaches again, and she'd nearly collapsed at her last basketball game.

"Do we get to pick a color?" I asked, trying in best goofy-mother fashion to distract Gaila.

She looked serious, though, and said, "I want purple. Purple and yellow. For the playoffs."

My three daughters are fierce and absolute in their devotion to the Los Angeles Lakers, and since this is an all-female household, the sight of Laker bumper stickers, Kobe jerseys, and the sound of shouts on game nights have startled some unwary neighbors. Especially junior-high boys who know Gaila.

She rolls her eyes as only someone her age can. "Every morning after a game, I hear the boys talking and I say, 'Samaki's got more offensive boards than Shaq because the refs aren't even letting Shaq breathe under the basket.' They look at me like I'm crazy."

I actually met their father in junior high, when he was on the basketball team. I was not a cheerleader, but a secret sportswriter. I had been a fledgling cheerleader, but was run over by a car in a freak accident that left a femur broken and me in traction for six weeks. I watched football on my tiny hospital TV, writing stories and summaries after each game.

By 10th grade, their father and I were having the kind of dates that carless, moneyless teens have: We would meet at the school or park courts and shoot around. Of course, he was 6-foot-4, I was 5-foot-4. He became a star forward for the high school team, and I was half of the No. 1 doubles team for tennis. But all season, I kept team stats for the coach, even stepping in as scorekeeper now and then. And on weekends, I literally stood in front of the television to see every play in the college and pro games, afterward writing my secret sports stories.

At USC, I was one of the first female sportswriters, and finally, other people saw my articles. I covered football, basketball, track and soccer. I was the only girl on my dorm floor who read agate, the tiny statistics in the sports section. But I had plenty of guy friends who were impressed by my knowledge of free-throw percentages and offensive tackles.

I stayed loyal, though, and married my high school sweetheart, who helped me choose a graduate school by judging the proximity of potential colleges to sports teams he liked. No Iowa, no Brown or Johns Hopkins. I had to go to University of Massachusetts at Amherst so we could possibly watch the Lakers play the Celtics.

Except that we were poor. So my husband and I watched the games on our ancient black and white, and according to legend (which I tell our kids), he nearly broke his toe one night kicking the cinderblock wall in married student housing when the Lakers became the victims of some bad officiating at Boston Gardens.

After I graduated, we returned to Riverside, had three girls, got older and slower, and became distracted by making a living. We didn't watch much sports on TV since he worked graveyard and I worked days. We parted ways, but by then, our girls had begun to play sports. Though we were divorced, we sat in the same bank of bleachers at practices and games, usually worrying about Gaila.

When she was 5, Gaila, our eldest, began having fearsome headaches, enduring pain so intense that she would become nearly comatose. It began when she started jumping rope in kindergarten, and got worse when she tried gymnastics.

She had her first MRI in 1994, during that kindergarten year, and was diagnosed with Chiari syndrome -- her skull was 8 millimeters too flat at the back, and was pressing against the cerebellum. We told her she was too smart, her brain was too big, and she believed us because she had been designated a gifted and talented student and knew there were only a few in her class.

But she didn't care about being smart, because her Chiari diagnosis meant she had to comply with strict physical restrictions that included no jumping, running or trampolines. She couldn't even jump off a low wall, or leap into the air for a volleyball, because the jouncing of her cerebellum could push it into the spinal column.

For six years, every time her sisters frolicked down the sidewalk or jumped off a garden wall, or played on a trampoline in a friend's yard, Gaila watched, glowering with anger and frustration.

She swam well, and played tennis, but she was so tall that people always asked her why she didn't play volleyball, or basketball, like her dad. The only way she could do that was to have surgery on her skull to relieve the pressure that was still causing severe headaches. Finally, when Gaila reached sixth grade, we took her to UCLA for the procedure.

By that time, Delphine, our middle daughter, had begun to play basketball. She is not as tall as Gaila (every morning, she used to glare balefully at me in the bathroom and say, "Thanks for being so short"), but she inherited my ball-stealing skills and my meanness. A keen eye gives her the ability to always find the open player, and she is so fast that she frequently sails down-court for an easy layup after picking the ball, infuriating the opposing players to the point of revenge. In one game, a boy knocked her down and then stomped on her hand. Her finger looked broken, but she told me after the game, "That just made me want to steal it a few more times."

Her nickname is Baby Kobe. And she became obsessed in the purest sense -- reading sports biographies, covering her walls with Kobe posters, waking up at 6 to shoot free throws, practicing in the evening with a glow-in-the-dark ball from her godmother. We took her entire girls' league team to a Sparks game last summer, and she followed the WNBA all season. Every night, the sound of the basketball echoes off the driveway.

Gaila had been watching, for all these years. She said she didn't like basketball now, she wanted to play volleyball instead. And truthfully, I was afraid for her to play with her sister, not just because of her health, but because Delphine was so good. She had dominated two leagues by age 10, and I didn't want Gaila to be bad at it, to have her father and sister shake their heads and suggest she try something else.

Gaila fell in love with the Lakers, too, but she didn't look at Kobe. That was Delphine's style. She talked about Robert Horry and Samaki Walker, knowing she had a power forward body. Casually, she started shooting baskets in the driveway, alone, and after a few weeks she challenged Delphine and her friends.

I watched her block Delphine's shots, back up into opponents in the best Shaq Diesel fashion and rebound like Samaki. My girls elbowed each other in the following weeks, glaring fiercely, stalking off the driveway complaining bitterly about fouls only to stalk back on and go at it again.

Gaila played her first season this spring, in the girls' league Delphine has starred in for three seasons. And when she yanked down a rebound over three girls and passed it to her sister to start the fast break, I could hardly breathe. I didn't know I would feel this way. It was completely different from watching their father play in college.

Delphine passed off for the assist, and they high-fived. Rosette, my 6-year-old, said, "That was so cool." Their father was on the bench, finally as assistant coach. He grinned and raised his brows at me, and I sat back down. Delphine didn't meet my eyes, because she was used to this, but Gaila smiled big and waved my way, negating the cool, which was fine with me.

We are not just conference finals Laker fans. We are known, at the junior high and elementary school, as hardcore followers. We watch nearly every game in the regular season. During weeknights, we finish homework fast, eat quickly and turn on the radio, since we have no cable, or watch the regular channel if it's broadcasting an away game. During spring break this year, we sat in a hotel bar (yeah, I know that's against the law for minors) because the bartender didn't mind us watching the big-screen. The bar was nearly empty. The Lakers were playing the Utah Jazz, and patrons were amused by my girls' subdued shouts.

As passionate sports fans and athletes, we find a rhythm to our weeks during the season. My girls rush out to the driveway in the morning for the newspaper, which they've rarely read before. When I enter the kitchen, they're going over game stats. Agate. They sit in front of the TV at the appointed hour with homemade rosters, and they paint their nails purple and yellow. We eat Nutella because Kobe is on the jar.

On game nights, no one bothers us. If they're visiting their father, who has lost his grand passion for the Lakers, they call me every few minutes: "Did you see that? That was such a charge!" "Kobe's hurt, Mama."

Their concentration and loyalty, their intense devotion, could have gone other places: movies, video games, pop music or rap or country, Pokémon or Star Wars. But I have to admit I'm glad they're obsessed with living, running, fallible, desperate, brilliant people who leap into the air when they win and cover their faces when they lose. Like all of us.

It's preparation for life, I think -- painful and hopeful and joyous, and always another chance, another season. Like parenting, I hoped, watching Gaila's arm being rubbed down by the MRI tech. We have to find out what's going on with the headaches, because her new season starts in two weeks.

As she slid into the huge machine, Gaila thought she saw a faint lavender tinge in the IV apparatus. "My blood is purple now," she said, grinning up at me. "Do you think it will last until the game tomorrow night?"

This weekend she turned 13. Her MRI showed no obstruction to her brain due to the surgery, and she's on an anti-seizure medication for the headaches. We listened to the conference championship game on the radio while she and her school friends played volleyball on the beach. She and her sisters and her father and I shouted loud enough that everyone up and down the coast knew the final score. And in the van, on the way home, the two eighth-grade boys she'd invited were forced to listen to the post-game wrap-up on the radio. "Gaila," one boy said, "I don't even know all the Lakers. You know all the players on every team in the NBA."

"Yeah," she said happily, proudly. I thought, Hope that's not intimidating to him. And I was proud, too, because she's hardcore.