This cookie-cutter spy thriller depends on the chemistry between Anthony Hopkins and Chris Rock. Um, wait, there isn't any. 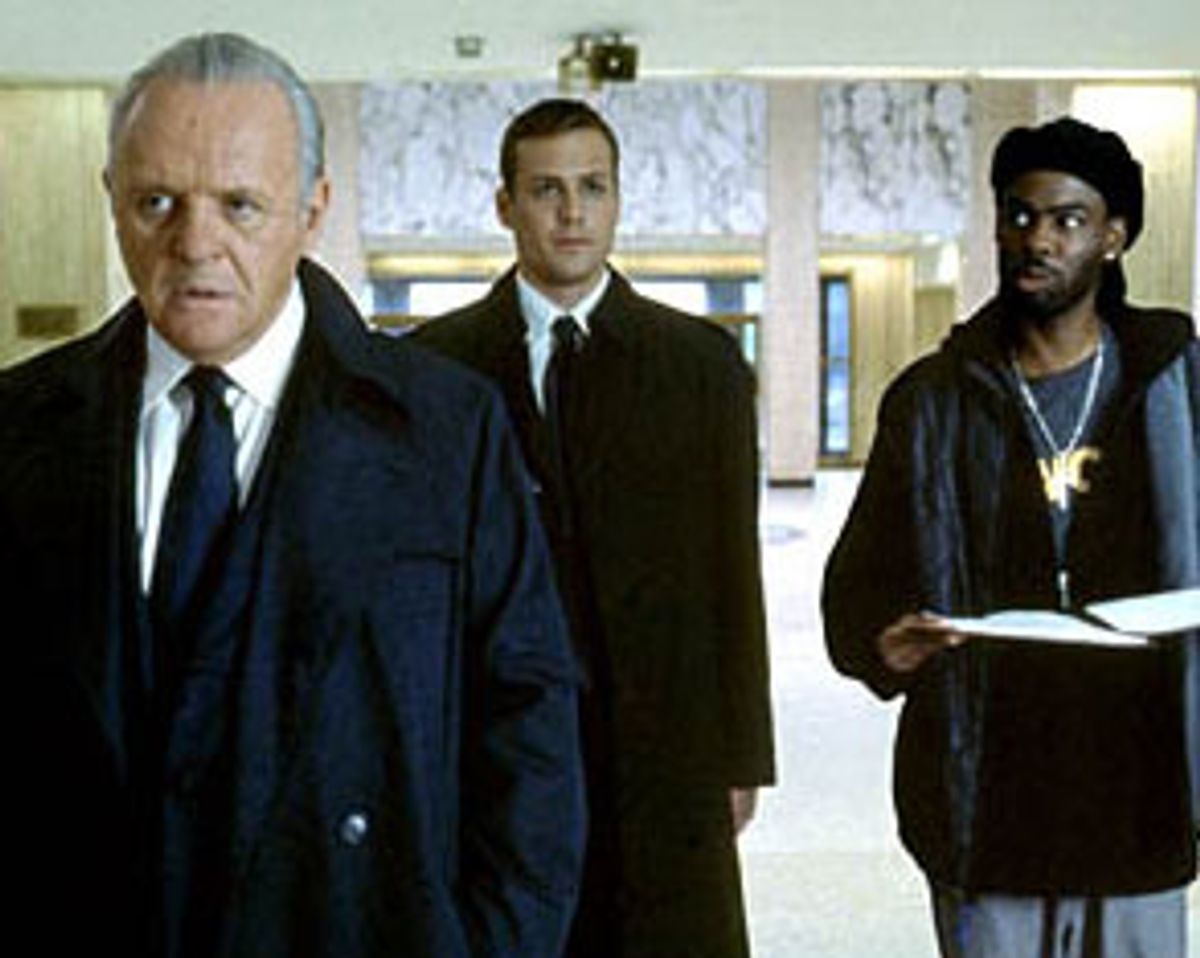 Last week, "The Sum of All Fears" gave us a slew of good male actors pulped to dullness. This week, with "Bad Company," it's the ladies' turn.

Three actresses, none of whom appears in the movies nearly enough, get trashed over the course of this wheezing, anonymous espionage action picture. Brooke Smith, who gave one of the great performances of the '90s in "Vanya on 42nd Street," gets to deliver gags about menstrual cycles and vaginal infections. With her short curly bob and big bright eyes, Smith (like Emily Watson) can look as if she just stepped out of the 1930s. As a CIA agent, she's basically an appendage. Irma P. Hall gets to trot out the bossy old black mama routine. Kerry Washington (she was Julia Stiles' girlfriend in "Save the Last Dance" and one of the teenage girls in the indie "Our Song"), who never seems less than fresh and genuine, gets to look heartbroken and, in the climax, terrified.

The movie's emphasis is on the chemistry between Anthony Hopkins and Chris Rock, which is a pity because there is none. If you've seen the poster, you've seen the movie. It's nothing more than somebody's idea that it would be funny to put a distinguished actor together with a brash, braying young comic. Hopkins demurs and Rock talks trash. The only thing missing is a little clock in the corner of the screen counting down the minutes until the uptight old white guy starts talking black.

Jason Richman and Michael Browning's screenplay has Rock in two roles: first as a CIA agent posing as an antiques dealer, who's murdered soon after the movie begins, and as the identical twin that agent never knew he had, a street-smart ticket scalper called in to impersonate his dead brother. Hopkins is his CIA handler. Their mission is to purchase a nuclear device from a shady arms dealer while dodging bullets from the terrorist who wants to get his hands on the weapon.

You could tick off the generic elements of this movie in your sleep. And why not? The director, Joel Schumacher, seems to have done just that. It's the sort of movie where the Eurosleaze baddies all have three days' worth of facial hair (is there a razor shortage in Eastern Europe?), designer shades, and the sorts of dark suits worn by strip-club bouncers. Hopkins is the company professional who warms to his upstart recruit and begins to balk at the ruthlessness of his superiors. Rock basically exists to bait whitey, and though some of his shtick is funny, you've heard it all before (his big moment is when he tells off the top CIA agent, gratingly played by John Slattery).

As one of my colleagues observed after the movie, "Bad Company" is the kind of picture that gets laughs out of a scene where the black man in a swanky apartment switches the stereo from the classical station to hip-hop. Those funny black folks sure do listen to some strange music! Word.

Hopkins delivers a performance that might be called "take the money and run" -- except that "take the money and take a nap" would be closer. At some level, you respect what he does because it's a refusal to commit to this lousy movie. He's here for his cachet, not to give a performance, and to borrow a phrase from Eddie Izzard, he couldn't be buggered to give one anyway. I chuckled at a scene in which he's overseeing an operation while quietly reading a book because it's emblematic of what he does here: amusing himself while all this other nonsense goes on around him.

Chris Rock thinks that giving a performance means simply downplaying his wisecracks, but since he's hopeless in the dramatic moments, he winds up canceling himself out. Rock has worked once in his subdued mode, in the sweet-natured "Down to Earth." But when he's in full "Chris Rock" mode, he looks like nothing so much as a deranged squirrel. Doing that here would only heighten the clichéd (and patronizing) way in which he's used. So he's stuck.

As for Schumacher's direction ... apart from "The Client" and the first half of "Flatliners" (with its strange, gorgeous imagery) what is there ever to say about it? In this Jerry Bruckheimer production (you've been warned), Schumacher is adept at putting himself into semi-serious blockbuster mode. The movie isn't offensive, like "The Sum of All Fears," and it's marginally easier to sit through. But there's no joy of whiz-bangery in its spy capers. You know that serious things are going on because of the look given the movie by cinematographer Darius J. Wolski. It's all underlit grays and browns with motes floating through the air. If you want to achieve this look at home, it should be easy. Simply stop paying your electric bill, don't dust for a year, and then drive a snow blower through your house.

At the end, the movie's chief terrorist scumbag gives a speech about how it's time for America, so long removed from the wars that have torn apart other nations, to taste death on its own soil, and the movie is so inept you can't even get irked at this cartoon version of recent events. Besides, heading out to the multiplex for a picture like "Bad Company" is as close to experiencing death on American soil as any of us would want to come.