What did Bush know?

An anonymous ex-Enron official says the White House knew about the company's impending demise as far back as August. 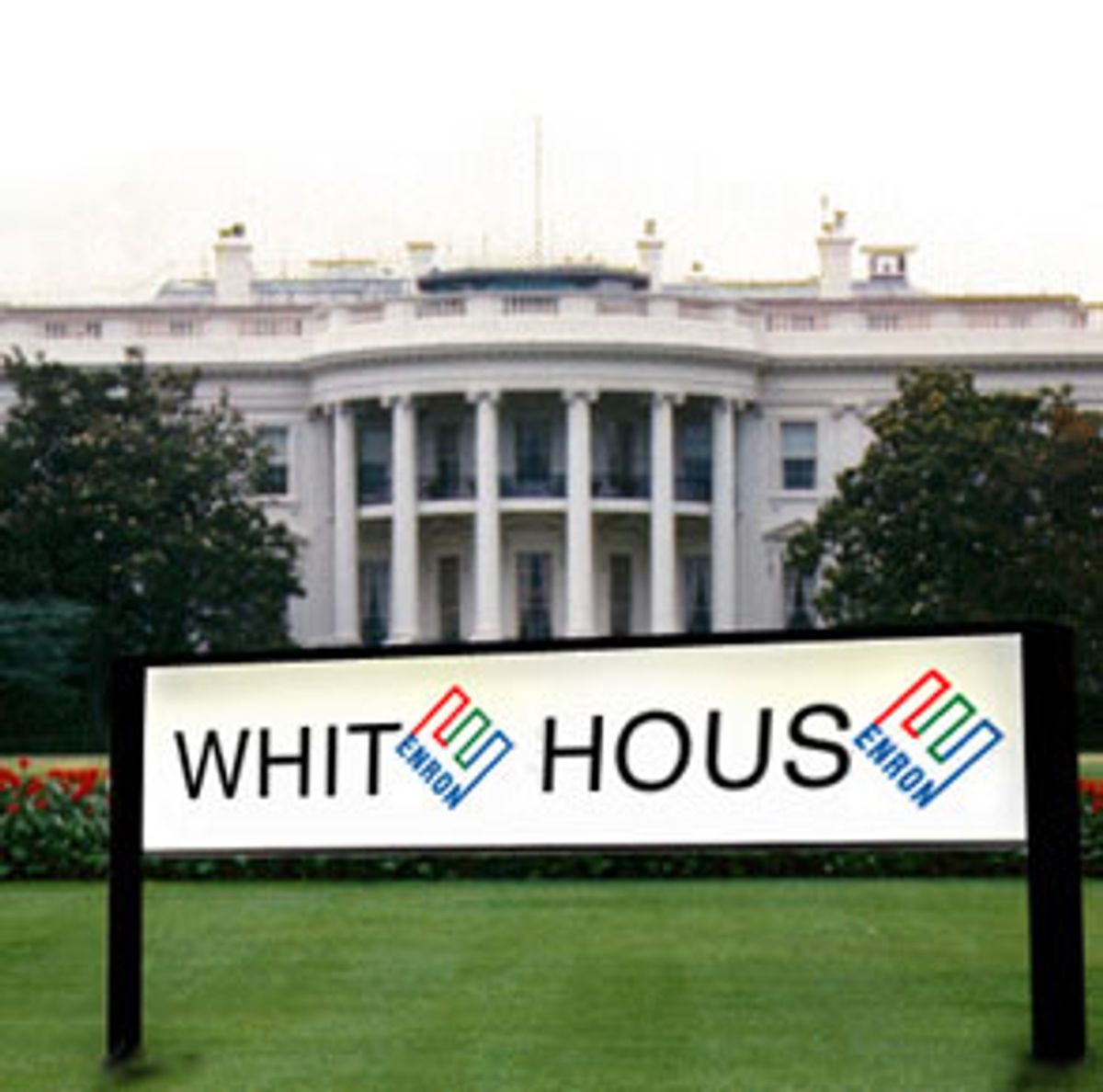 According to a former Enron Corp. executive under congressional investigation in relation to the company's collapse last fall, an Enron lobbyist tipped off the Bush administration last August about the company's impending financial problems.

"It was very well known that Enron faced a financial meltdown," the former executive said. "The day that Jeff resigned our stock plummeted. We knew it wouldn't rally. What we didn't know was how the financial problems at Enron would impact the energy markets in the U.S. That's why Pat met with Mr. McNally. To find out."

When contacted for a response, a White House spokeswoman, Anne Womack, would only point out that the meeting was acknowledged by the White House on May 22 in documents released to reporters and Sen. Joe Lieberman, D-Conn., chair of the Senate Governmental Affairs Committee. In those documents, it was noted that "Mr. McNally met with Mr. Shortridge and another individual who was not from Enron." Asked whether Enron's future was discussed, Womack said, "If the meeting was about that, I would assume there wouldn't be anyone else there besides Mr. McNally and Mr. Shortridge." A spokesman for Enron refused to comment for this story.

If McNally was tipped off to Enron's troubles it would mean that White House had been warned several months earlier than it has previously acknowledged of Enron's failing fortunes, which caused thousands of employees to lose tens of millions of dollars in retirement benefits. It would also mean the White House received such a warning even before Sherron Watkins delivered her famous memo to then Enron chairman Kenneth Lay, warning that the company's byzantine partnerships could destroy the company.

It also fuels the most common question plaguing the administration these days: What did President Bush know, and when did he know it?

On Tuesday, the White House turned over more than 2,000 pages of documents to Lieberman, complying in part with subpoenas from his committee seeking White House documents showing Bush administration contacts with Enron. It is still unclear whether further details of the Aug. 15 meeting are mentioned in the documents. Contents of the newly released documents are being reviewed by Lieberman's committee, and will be released only when it "serves the public interest," Lieberman said. In the meantime, Lieberman has agreed to provide the White House 24 hours notice before making public any of the documents, which will be highly guarded. Under an agreement with the White House, only a limited number of staffers from the committee will have access to the documents, and must first sign a confidentiality agreement.

When asked about the Aug. 15 meeting, Leslie Phillips, a committee spokeswoman, said it "should definitely have raised a red flag," Phillips said. "We'll have to investigate that."

So far, all that is known of the documents released Tuesday is that they reveal communications between the administration and Enron relating to Vice President Dick Cheney's energy task force, the California energy crisis, Enron's bankruptcy filing and White House appointments, including a letter former chairman Lay sent Jan. 8, 2001, to Bush's personnel director, Clay Johnson, recommending seven candidates to the Federal Energy Regulatory Commission. Two of the candidates Lay recommended, Pat Wood and Nora Brownell, were appointed to FERC by Bush; Wood was appointed chairman.

The August meeting raises further questions about the administration's interactions with Enron, a company with especially close ties to the Bush White House, which has been notably inconsistent on its spin about Enron since the company filed for bankruptcy on Dec. 2, 2001.

On Tuesday, Bush's chief counsel, Alberto Gonzales, would not comment on the substance of the meeting between Shortridge and McNally. He said that there is no known instance of Enron officials asking White House officials for help before the company filed for bankruptcy in December.

But Enron did seek help from the Bush administration prior to the company's bankruptcy filing in December, according to documents released by the White House earlier this year. According to those documents, Lay called Treasury Secretary Paul O'Neill on Oct. 28, to advise him that Enron was heading toward bankruptcy. The following day, Lay asked Commerce Secretary Don Evans for help in heading off a downgrading of Enron's credit rating by Wall Street credit rating agencies, which would push the company into bankruptcy. A week later, Enron president Greg Whalley called Treasury Undersecretary Peter Fisher six to eight times, seeking help in getting banks to lend more money to Enron.

The White House also announced in January that Lawrence B. Lindsey, who heads Bush's National Economic Council, had directed a review in October -- before the calls received by O'Neill and Evans -- to see whether an Enron collapse could have a strong impact on the American economy. That admission prompted critics to sound several alarms.

As Jennifer Palmieri, a spokeswoman for the Democratic National Committee, said at the time, "it shows once again that the administration did a lot of thinking about the fact that the company was going to collapse but they did absolutely nothing to make sure that 50,000 Enron employees would not lose their life savings."

It also drew closer attention to the intensely close ties between Enron and the Bush administration. Lindsey had been a paid consultant for Enron, receiving $50,000 in 2000. And he is just one of other top White House and Republican Party official with close Enron ties, including Robert Zoellick, the United States trade representative, who sat on an Enron advisory board in 2000; Karl Rove, the senior White House political strategist, who held more than 1,000 Enron shares before selling them in June 2001; and Marc Racicot, chairman of the Republican National Committee, who worked as an Enron lobbyist last year.

Then there's Enron's close financial ties to the Bush campaign. Enron and its employees gave more than $1 million to Bush's 2000 election campaign, the Republican Party and the Bush Inaugural, and Bush aides used the Enron corporate jet during the post-election fracas in Florida.

White House press secretary Ari Fleischer told reporters this week that he hopes Lieberman does not use the documents turned over to his committee as a "fishing expedition."

"I hope the question from the committee is focused on any prior knowledge about Enron's bankruptcy, and communications with Enron where information about bankruptcy could have been conveyed, and not an open-ended fishing expedition about any contact with anybody at Enron for any reason," Fleischer said.