Young women working as medics in Jerusalem divide their lives between bloody mayhem and the rituals of adolescence. 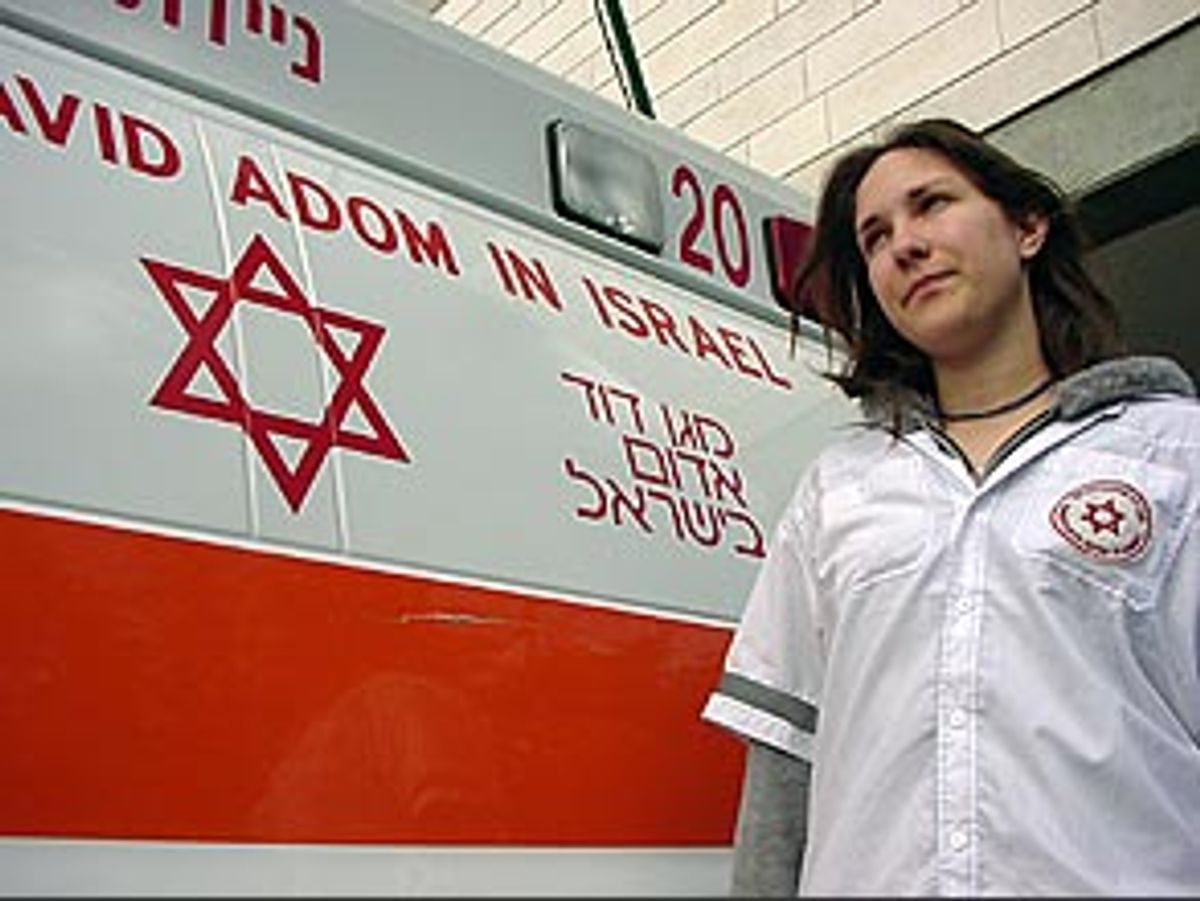 Jerusalem medic Shira Bitansky struggles to describe the first time she responded to the scene of a suicide bombing. Inexperience and a gush of adrenaline blurred her memory of the events, but certain images linger. She can recall the smell of burnt flesh. Bodies hastily draped with bystanders' clothing. Her hair sticky with someone else's blood.

That night last December, Shira was drinking beer with friends in a downtown pub when two explosions several blocks away sent her running into the street, wobbling atop a pair of chunky platform shoes. Within minutes, she was herding victims into ambulances, bandaging the wounded and comforting the victims of shock.

Her most vivid recollection: a policeman shoving a plastic shopping bag toward her. "Take this," he ordered. Inside, she was told, was a severed hand. She tossed it into the nearest ambulance and continued in the fray. All told, 11 people died and an estimated 180 were wounded.

That first bombing, Bitansky says, "was the most traumatic thing for me ever." She sits on a worn sofa in the basement headquarters of Magen David Adom (Israel's version of the Red Cross, "Mada" for short), wearing a uniform that looks like an oversize smock. "It was a mess, and I didn't know what was going on or where the bombs went off. I wasn't in uniform, and everyone was yelling at me to go away because I look young."

Bitansky, a Jerusalem native, is young indeed -- just 18 -- and one of 21 young women, most not yet out of their teens, who work here as full-time medics in lieu of their compulsory two-year military draft. As members of Sherut Leumi (National Service), a civil-service program for girls, they were given the option to volunteer in day-care centers, special schools or nursing homes. Instead they chose one of the grisliest jobs short of combat. Jerusalem has always been the epicenter of terrorism, and a Mada trainee here does not remain a novice for long.

"I knew what I was getting myself into. I wasn't intimidated," Bitansky says. Inspired by high school biology courses and syndicated episodes of "ER" (George Clooney made her swoon), she first cruised in the back of a Mada ambulance as a 15-year-old volunteer. These days, she sits up front, often second in command after the driver. "Truth is, I knew I'd have more work," she says. "There's something very addictive about it. It's a rush. You're saving lives. It's not like sitting in an office and typing things up like I might've been doing in the army."

The initial trauma of her first pigua (Hebrew for "attack") -- a double suicide bombing coupled with a car bomb -- lasted about two days. Six months and several attacks later, Bitansky is dry-eyed and matter-of-fact about her duties. It is that first moment, when a rookie disembarks from an ambulance into bloody chaos, that often serves as a litmus test of the trainee's nerves, she says. Some are overcome by the carnage -- whether it's from a bombing, a shooting or one of Jerusalem's 20 car accidents per day (in this country, automobiles claim more lives than terrorists) -- and succumb to shock right there. Some quit the same day. But according to the girls, the majority are quick to develop an immunity to death and destruction. Without it, they say, they couldn't do their job.

"As soon as you get [to a pigua], you see arms, you see legs, you see pieces of human beings all over the place," says medic Ilana Steinberger, 19, who volunteered her first year of national service in the surgery ward of Jerusalem's Hadassa Ein Kerem Hospital. "People are going nuts. They've got body parts in their hair.

"One man I saw was screaming at the top of his lungs. He'd lost his whole hand," she continues. "Every time I go I always think, how could a human being do this? You get there and just can't comprehend it. But two seconds later you have to click out of it and go to work, and that's it. The emotions have to come afterward."

Medics are forced to make a series of critical choices under duress: Do they rush in despite the threat of multiple bombs? If it's a case of a terrorist on a shooting spree, has the shooter been, to borrow a term from Israeli police, neutralized? In such scenarios, Mada procedure calls for all personnel to don helmets and flak jackets, but in the ensuing madness, many forgo the cumbersome accessories -- and personal safety -- to evacuate the wounded.

To avoid overlap, an ambulance crew of two to four attempts to stay together as they work a scene, combing a triangular area with a primary goal: to scoop up the patients and run. In the first sweep, training dictates that they must not stop to perform CPR -- or any other treatment that is at all time-consuming -- on a victim who's stopped breathing if there are others, badly wounded but still alive, who can be saved. In extreme cases, those who could've been saved must die.

"That's one of the things that really bothers me," Bitansky says. "But you have to continue, you have to keep moving, because you could save someone else instead of focusing on this one guy that may already be dead because you don't know what's wrong with him."

If a victim is bleeding heavily -- from a half-severed arm, for instance -- medics must judge whether a tourniquet is necessary. The procedure puts the entire limb at risk of amputation (after 20 minutes the constriction causes cells to deteriorate), but doing so may save the patient's life. If a tourniquet is applied, the exact time the final knot was tied must be written somewhere on the person's body, usually the forehead. If a marker isn't available, medics scrawl it in blood.

Only volunteers who are 18 and older are allowed to respond to an attack, explains Mada's Jerusalem regional chief, Yonatan Yagodovsky, fully aware that young trainees may suffer lasting trauma. On any given shift, an ambulance crew could include a senior driver and two 15-year-old volunteers; if called to an act of terror, the minors must be dropped off first. Having responded to a bombing at 16, Yagodovsky is quick to defend Mada's conscription of the young. His adult staff of 140 oversees roughly 500 teenage volunteers in Jerusalem alone, he says. The organization, he adds, was built on a spirit of youth and philanthropy.

"Age is not a question," he booms from behind his desk. An ominous photo of a Mada ambulance engulfed in flames hangs directly across from him. "I know it from my own experience. [The younger staff] do outstanding work. They're very professional, very determined. It doesn't matter if they're teenagers or adults; the only difference is their level of training. The main thing is, we have procedures and protocol of how to absorb them into the system and how to -- hopefully -- gradually expose them to events."

For Bitansky, the trauma of her first bombing had little to do with gore -- her father, she offers as a partial explanation, is a third-generation butcher. Instead, it was a rush of complicated emotions -- anger, guilt, sadness -- that overwhelmed her upon returning to the station that night. A gnawing feeling that she could've done more gave way to a specific memory of suffering: Five years earlier, on exactly the same street with the same number of bombs, her best friend Yael, 14, was killed, reportedly catching a piece of shrapnel in her neck.

"I was hysterical, crying every five minutes," Bitansky says of the hours immediately following her first bombing. "The next day, I couldn't work, I didn't have the patience to be here. But I wanted to hear as much as I could about what happened, what [the other medics] said about [the bombing]. That made me feel better. Just to hear stories about it.

"Some were even making jokes, because that's just how you deal," she says. "Eventually, I let it go by. You just don't think about it anymore. You go on living. I wasn't going to sit and obsess about it. I got over it."

The element of shared experience, coupled with the support of family and friends, is what Steinberger says is the source of her strength in the job. Chatty and quick-witted, she says that every newcomer at Mada deals with shock differently, that she personally isn't the crying type but doesn't hold anything inside.

"In the beginning [I felt] anger," Steinberger explains. "I do get pissed from it. It's not humane, it's not right, to do this to people. But when you experience something like a pigua, you talk with others who also went through it. I'm very open. I have no problem telling people how I feel. So I deal with the fact that there's nothing I can do about [our political situation] except for help. I did my best, I did whatever I could and that's it. There aren't enough tears to cry."

Steinberger, who commutes to and from her West Bank settlement every day in an armored bus, says that ever since the first Palestinian intifada in the late '80s, nearly every family in her neighborhood owns a car with rock-proof plastic windows. Bulletproofing is an expensive option, she says, but an enticing one since the highway connecting her town to Jerusalem occasionally draws automatic gunfire from nearby Bethlehem. "You hear dtt dtt dtt dtt dtt dtt ... so everybody ducks and you drive as fast as you can," she says, somewhat nonchalantly.

Neither Steinberger, nor any other Mada personnel interviewed for this story, reported having a single work-related nightmare. And despite predictions of more violence, Chief Yagodovsky insists that morale has always remained high within the ranks of Mada, and the unit has never experienced a slump in volunteers.

"I'm not worried about Israel," says Steinberger, a fervent Zionist who says that dealing with the violence has only made her stronger. "I believe in the country, that God will take care of us. There could be bombings every day, but we're still going to be standing here."

After her second year of Sherut Leumi is finished, Steinberger may pursue additional training to become a paramedic, which will allow her to administer medicine. Attending university is also in the cards, but even if she is in school, Steinberger says she will pull shifts as a volunteer beyond her national service. Bitansky, on the other hand, hopes to leave Jerusalem in the near future (perhaps to work on another Mada unit), mainly to experience life away from home. Both women are entertaining the idea of becoming doctors.

After hours of loitering around Mada headquarters (which, with its mismatched furniture and cliques of teenagers milling about, feels at times like an ill-funded after-school center), the Sherut Leumi girls finish their shift.

Bitansky is visibly stressed about the weekend: It's her sister's bat mitzvah on Sunday, and she's promised her younger brother that she'll help him shop for dress pants. Her boyfriend plans to leave the day of the bat mitzvah to travel for a month in Europe, so Bitansky probably won't have time to say goodbye. She wonders how she'll fare without him.

"Ah! I'll have no life," she frets, clutching her purple cellphone. For a moment, the mask of seasoned professionalism falls away and Bitansky, a teenager after all, acts her age.

Ken Lee is a freelance writer based in Jerusalem.