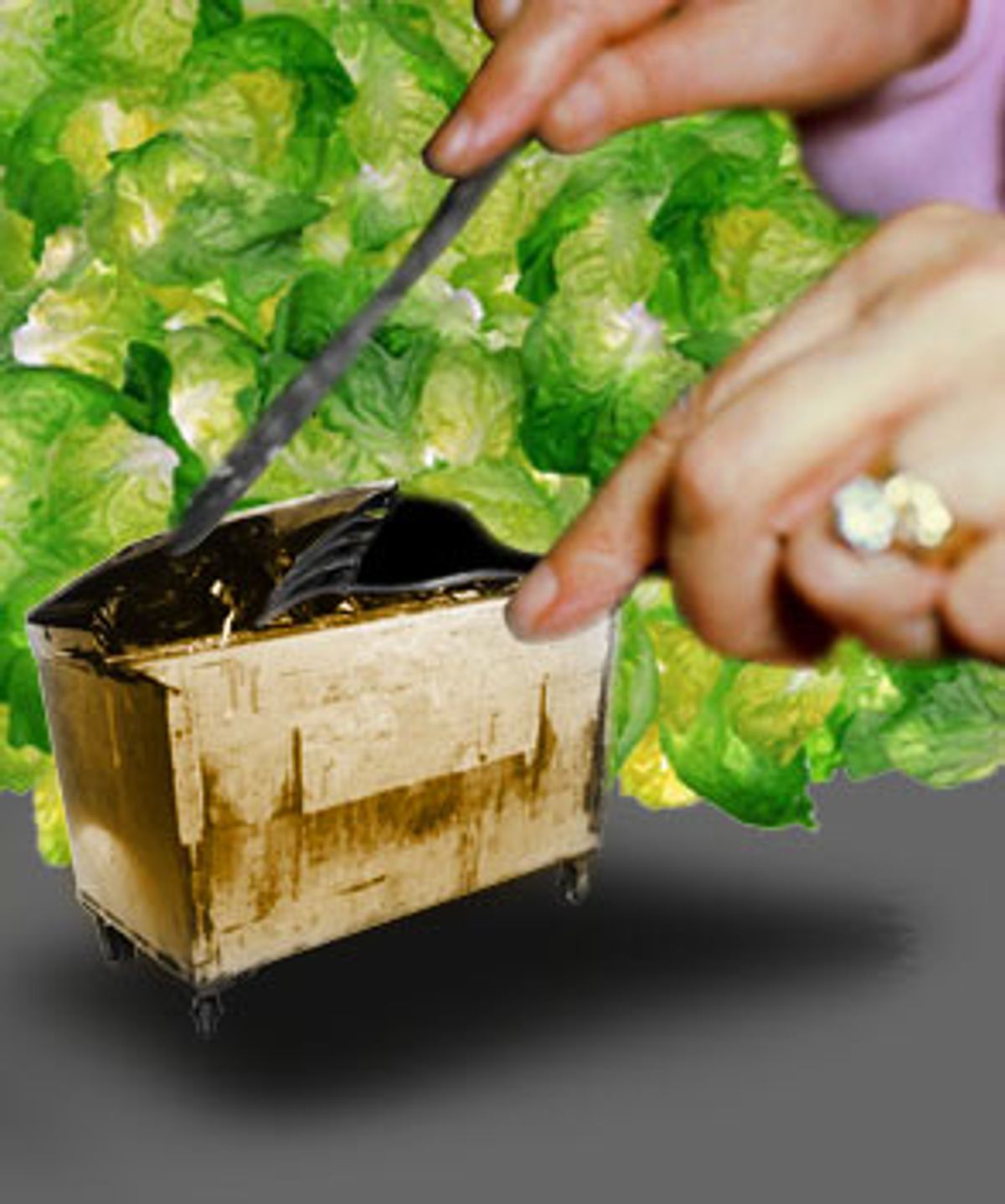 Normally I am a fun date. I like good restaurants that serve ridiculously vertical entrees and dry martinis. It doesn't hurt if the lighting is good and the servers are attractive. Cooking at home, I am a diva of fresh and perfect produce. I love slicing kumquats wafer thin into salads of freshly picked greens and concocting ever more exotic dressings. But lately I've been thinking a lot about the politics of food and, as we all know, thinking about fun always ruins it.

I'm not just speaking about the very scary genetically engineered potato on my plate, or the even scarier idea that we'll all die of mad cow disease in a few years, but the very premise of fine dining: conspicuous consumption and the waste that is central to its enjoyment. When I buy unblemished produce or eat at a restaurant, I am not just supporting a market that charges far too much money; I am part of an economy of excess and luxury that leaves far too much in the trash. Which brings me, albeit in an abrupt manner, to the topic at hand: dumpster diving.

Dumpster diving itself is not new; those without have been diving into the trash bins of those with since the beginning of time. But dumpster diving is not just about need. It is often about a political impulse to liberate the excesses of the rich for the poor. It is part of a larger ideology of radical nonconsumption. Thirty years ago, the Diggers liberated the waste of capitalism for those in need. Long before the Diggers, Franciscan monks liberated the waste of feudalism. What is new about today's waste liberation movement, sometimes known as "Do It Yourselfers" (DIY) or just plain old anarchists, is that it is part of the larger movement against global capitalism, a movement made most visible when they gather en masse at G7 meetings and other iconic events of the global economy.

The dumpster divers are the most logical subset of the anti-globalization activists because they live in a way that does not create any demand for goods and therefore their lives do nothing to propagate the very system they are protesting. It is difficult to know how many anarchists occupy this wing, especially since most of them are not particularly thrilled about talking to the "liberal media." (When I first started this article, many of the anarchists refused to speak to me because they felt I represented the "liberal media" and would therefore distort their views or, worse, expose them to police intervention). It is fair to say that the Do It Yourselfers have a national, if not international, presence that is evident on many of the anarchist Web sites and in much of the anarchist media (especially 'zines).

Do It Yourselfers are not just living off the grid, but off of the excess that the grid produces. In an incredibly idealistic act of faith, they believe that by redirecting consumer capitalism's "waste stream" to those in need, they are actually dismantling the master's house with the master's tools. Although I am far too cynical to believe that global capitalism will be affected by the redistribution of waste, I am impressed by the strict ethical code that gets this food to people in need. Through both informal and formal channels, such as Vermont's Food for Folks program that only distributes reclaimed foodstuffs to the needy, Do It Yourselfers are doing something that seems both useful and incredibly ethical.

I was so impressed by the strict ethical code of the dumpster divers that I began following them around Burlington, Vt., where I live. Because this is a small city, and dumpster diving is illegal, all of the people I spoke to asked me not to identify them. They also asked me not to identify the dumpsters since some owners might feel compelled to stop the "theft" of their trash by getting compactors and locks. Suffice it to say that the people I spoke to, all of whom were in their mid to late 20s, are able to get day-old bagels, food from grocery stores that would normally be thrown out because it has passed its expiration date or is overripe, and pizzas and other fast food that has sat under warming lights long enough that it cannot be sold, and even candy that is either imperfect or past its prime. In other words, a relative healthy meal and dessert too.

The media, complain Do It Yourselfers, often get dumpster divers wrong, believing that they are not just using what's left over, but stealing from large corporations as a way to put a wrench in the capitalist machinery. This has been particularly true since the publication of "Evasion," a picaresque memoir of a young Do It Yourselfer that also is a how-to manual in shoplifting.

The fact is, however, that most of the people trying to live outside consumption oppose theft. As Chubba explains it, "Theft still falls under the category of 'creating a demand' ... When something is taken off the shelf of a lot of corporate grocery stores, there isn't a difference between the space created by stealing it or the space created by purchasing the product ... there is just a space. A space dictating a call for more of the very same product."

Doing-it-yourself doctrine relies on a critique of capitalism as an immoral distribution of wealth, and on an anarchist-inspired call to action. According to Andy, a 28-year-old political puppeteer, dumpster diving and anti-consumerism more generally come out of a "wish not to participate in a 'work economy' or to participate in an economy that is causing a lot of misery." Instead, the waste of the miserable system is diverted to the miserable -- or whoever happens to be around when the bounty arrives.

"Last time I went to Burlington," says Andy, "I picked up three hitchhikers on the way home and sent them off with three boxes of food, all from dumpsters."

Dumpster divers also are siphoning off the one thing consumer capitalism cannot live without: waste. Without waste, consumer capitalism cannot charge for the luxury of the flawless tomato or the freshly baked bagel. According to Adam, there is "so much tied up in what I call the 'perfect capitalist vegetable.' If there's a blemish it's thrown out." Similarly, everything baked is tossed at the end of a day so that fresh things can be baked in the morning. In other words, without waste, conspicuous consumption becomes far less conspicuous.

Like most of those involved in diverting the waste stream to those in need, neither Adam nor Chubba grew up without food. Adam is from a fairly privileged family in Connecticut and went to college to study literature. Chubba was able to "travel and goof around" for years after high school and even go to art school for a while. But, as Chubba explains it, the more education he got, the more he didn't believe in the capitalist system as "a viable model for humanity to practice." Besides, he says, the process of diverting the waste stream is a politically ethical stand that also happens to be fun.

"The excess is not just a pear here and a case of tomato sauce there," he explains. "It is more food than you and your 20 friends know what to do with. I have had to solve such problems as: What do we do with seven cases of wrapped chocolate? Is there a recipe that calls for 100 red bell peppers? How many ice cream sandwiches does it take to give you a stomach ache or how many grilled cheese sandwiches will 15 loaves of bread, 30 tomatoes and 40 pounds of extra sharp Grafton cheese make?"

The idealism, if not the actual food and criminal activities, of such a movement is enough to turn some peoples' stomachs. It is difficult for even the most optimistic among us to believe that eating trash will actually have an impact on global capitalism, but it does have a cultural one. To eat "trash" is to go against our cultural consciousness, which imagines that food can be "tossed" from the realm of what can be safely seen and discussed into an abject state of invisibility and taboo. To consume the abject trash is to risk contamination and status as a fully civil human.

Eating trash turns my stomach, not just because I'm squeamish, but because I'm socialized into a culture that separates food from trash and humans into "deserving" and "revolting." Yet I find myself more attracted than repulsed by those who live off of and redistribute waste. It's not that I would actually eat out of the trash (I tried, I can't), but I know -- we all know -- that landfills should not be full of perfectly edible foodstuffs, and no one should ever go hungry. That there are some who structure their lives around this knowledge is inspiring and I am grateful. So grateful that I am tempted to join them. And probably will. Just not for dinner.