The Green Party's goal: Ensuring that Republicans take over the Senate. 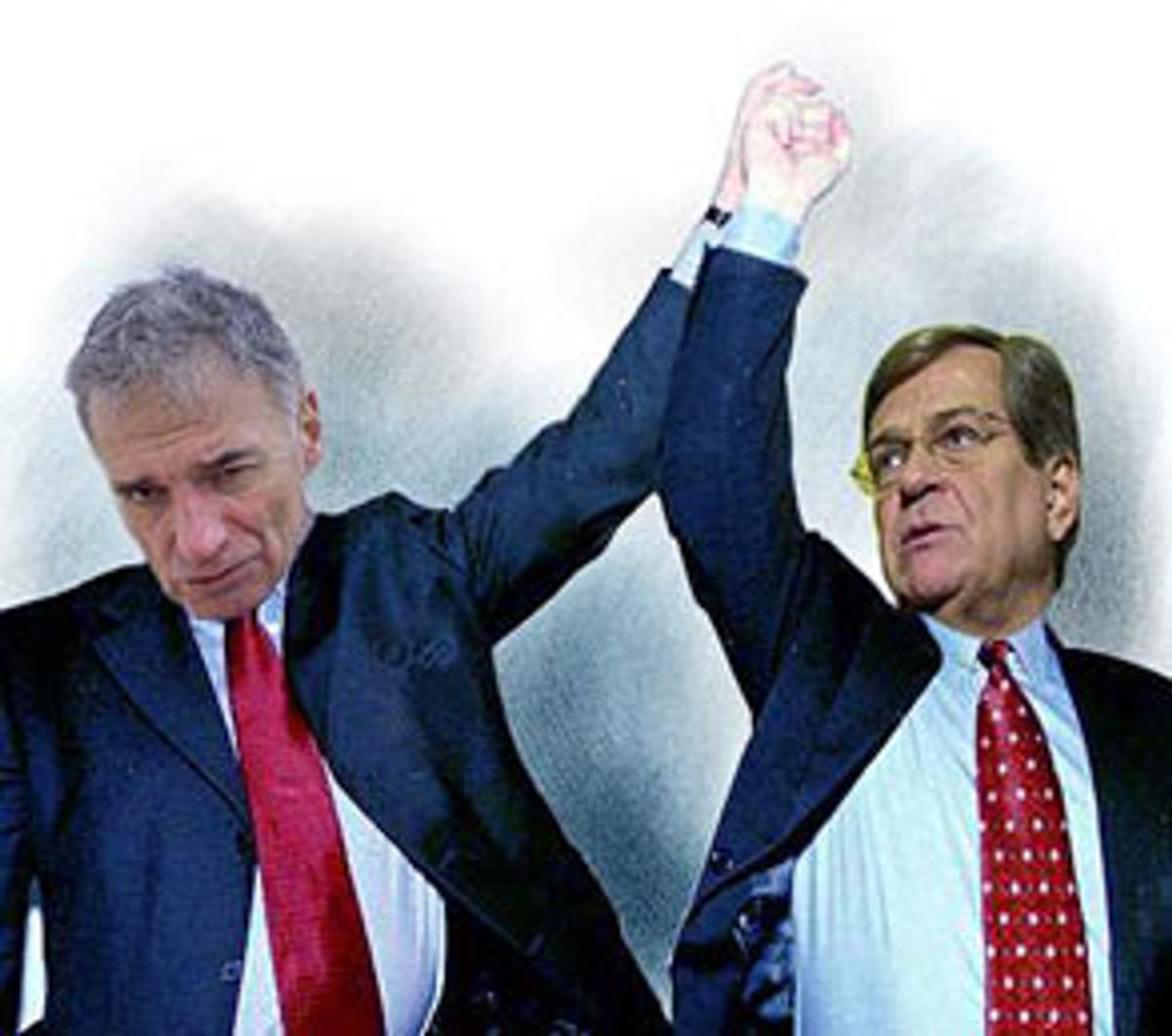 Ralph Nader can talk out of either side of his mouth about the consequences of his Green Party presidential candidacy and third-party spoiler strategies. What he says at any moment depends on whether he is avoiding blame for Republican advances or promoting himself and his followers as the inexorable progressive vanguard.

In the immediate aftermath of the November 2000 election, there were moments when Nader celebrated the defeat of Al Gore as his own victory. But there were also moments when he insisted that his third-party campaign didn't affect the outcome. He occasionally cited a poll that shows he took relatively few votes from Gore, although most surveys indicate that he drained away more than enough to "elect" Bush (for a convincing analysis, read this Reason article by Matt Welch).

Nader often threatens to deliver both houses of Congress to the Republicans unless the Democrats surrender to his ideology. But sometimes he will claim -- as he did not long ago in Slate -- that Green votes actually helped the Democrats gain control of the Senate, by mobilizing left-leaning voters who otherwise wouldn't have showed up at the polls.

In other words, he wants to have it both ways. As the self-appointed scourge of the Democratic Party, he feels entitled to destroy it for its political sins, without assuming any responsibility for the ill consequences of his moralistic posturing.

That convenient ambiguity will no longer be available to Nader after this year's electoral returns come in, which is why certain prominent Greens -- most notably his 2000 vice-presidential running mate Winona La Duke are seeking to soften their party's destructive vendetta against the Democrats. But so far, the great Green guru himself has remained silent about the potential price of the party's midterm crusade, which may return the Senate to Republican control and preserve Republican power over the House of Representatives. Nader evidently feels no qualms about handing the country over to Sen. Trent Lott, R-Miss., and Rep. Tom DeLay, R-Texas, those most faithful servants of corporate power, so long as the hated Democrats are ousted.

There isn't really much else that the Greens can hope to achieve. Whatever their utopian platforms may say about renewable energy, corporate responsibility, diversity rainbows or frogs in top hats, the ruin of the Democratic Party is their only feasible aim. The first Democrats to be taken down, if the tiny party's plans are effective, will be the most progressive.

In Wisconsin, for instance, a pair of Democratic representatives with strong environmental and labor voting records will face both Green and Republican challengers. Gerald Kleczka of Milwaukee has a perfect rating from the League of Conservation voters, while Ron Kind's record is almost as pristine. Yet they are being targeted by the Greens, whose national co-chairman resides in Madison, solely because of their party affiliation (and because the party may be able to create an illusion of mass support in their progressive districts).

Similar Green candidacies around the country, targeted opportunistically at certain Democrats, may well affect the exceptionally tight struggle for control of Congress. Every extra dollar needed to defend an otherwise safe Democratic seat against a third-party challenge, of course, makes a fall offensive against the better-funded Republicans more difficult.

Even in conservative Texas, where black Democrat Ron Kirk is regarded as a potential upset winner to fill the Senate seat of retiring Republican Phil Gramm, the Green vote will make a difference for the worse. Nader took slightly more than 2 percent of the Texas presidential vote two years ago, a number that was meaningless then but might represent the margin of victory for the Republicans next November. Again, the opportunism is blatant, with the Greens likely to nominate an African-American activist to run against Kirk.

And in their most appalling move, the Greens are running a candidate for the Senate in Minnesota, where incumbent Democrat Paul Wellstone is facing a well-funded challenge from Norm Coleman, a popular former mayor of St. Paul (and former Democrat) who enjoys strong support from the White House. Experienced observers believe this important race will be decided by a very small margin.

National Republicans have stuck a bulls-eye on Wellstone because they don't like his independent attitude and they believe his progressive politics will make him vulnerable. Instead of endorsing him, however, the state's petulant Green Party leadership is cooperating with Karl Rove by nominating their own Senate candidate. They reportedly balked at the pressure from Minnesota Democrats -- and their own wiser members, such as La Duke -- to join in an endorsement of Wellstone.

The Minnesota Greens suffer from the confused mental state that leaves them and many of their comrades unable to distinguish between Democrats and Republicans or liberals and conservatives. They cannot comprehend that wrecking Wellstone will only advance the most environmentally destructive Republican schemes, while tilting the Democratic Party to the right.

But the Greens tend to welcome such disasters as confirmation of their own moral hygiene. What matters to them is that Minnesota voters will be able to vote in good conscience for a left candidate still purer than the very principled Democrat who now serves them.

The Progressive magazine, a publication ordinarily sympathetic to Nader and his supporters, recently exposed the weird conduct of the Minnesota Greens in a fascinating article by editor Ruth Conniff. She quoted a party official saying that they oppose Wellstone because of his votes on terrorism and military issues: "We want to give people in Minnesota the opportunity to vote their conscience. If they're opposed to military actions in the Middle East, the Patriot Act, the sanctions on Iraq."

Unfortunately Ed McGaa, the mystically minded Senate candidate nominated by the Minnesota Greens, is barely able to formulate any coherent position. He is certainly no Green purist. (Among other offenses, he hunts and eats meat.) When he articulates his opinions on foreign policy and defense, they are often to the right of Wellstone's. He appears to have been selected primarily for his Native American ethnicity, because he is otherwise an utter embarrassment to his political sponsors.

On foreign policy issues McGaa, an author of books about ecology and spirituality, is closer to George W. Bush than to the party that nominated him. He is a military veteran who "remains proud of his 110 combat missions in Vietnam" and feels that an armed response "was needed to Sept. 11."

According to Conniff, McGaa hasn't really considered how his candidacy might affect the bigger national picture. "It will be a shame if the Republicans get in. On that I have to agree with you," he told her. "I'm not enamored by George Bush's policies. I think I may draw a lot of people, though, because I'm uniquely different, and I have a lot of knowledge, and plus I'm a veteran and right now people are very, very patriotic." As for the political geniuses who chose him, they admitted to Conniff that they knew almost nothing about McGaa when they picked him at their nominating convention.

"Unfortunately, we're just now finding out," sighed one of them.

In keeping with their infantile style of politics, the Greens have nominated a joke candidate against a serious public servant. This fiasco demonstrates their disrespect for the democratic process and for an opponent who deserves better. Such is Wellstone's reward for a lifetime of activism and an outstanding record in the Senate. Such is the gratitude of Nader and his followers toward one of the very few Democrats who publicly praised his role in the 2000 election.

Right now, Nader seems more concerned with silly posturing, complaining about the officiating in Game 6 of the Western Finals to NBA commissioner David Stern. But if the Green assault on Wellstone succeeds, the Minnesota Democrat won't be its only casualty. Nader can still prevent this debacle, which will complete the pointless and ruinous process he began two years ago. Otherwise, what will he say when, thanks to him and his party, the Republicans gain control of the Senate?