Calling all unpublished writers: For a fee, Penguin Putnam will tell you how bad your manuscript is. 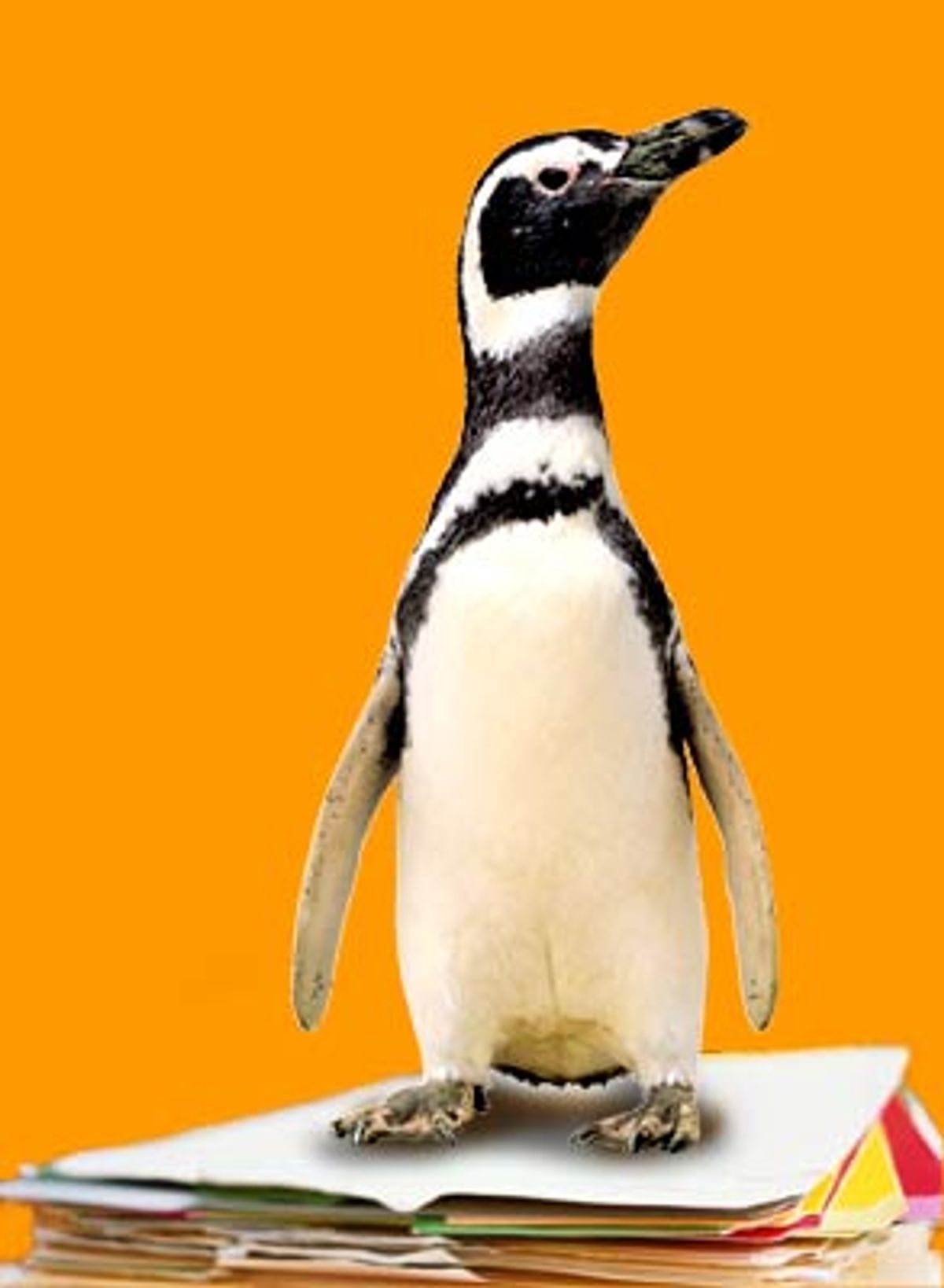 Jim Conover, 61, a retired police officer in Pekin, Ill., started writing his first book more than a decade ago, when he was a desk sergeant on the night shift, working from 11 p.m. to 7 a.m. Keeping the peace in the early morning in this suburb of Peoria, population 35,000, proved so "boring" that Conover had plenty of free time to scribble away at his nonfiction book about a gang of horse thieves who terrorized Illinois back in 1869.

Fourteen years, four more books and five screenplays later, Conover is still unpublished. Over the years, he's sent more than 300 queries to editors and agents without a bite. "Most of the publishers send you a form rejection telling you to go through an agent," says Conover. "Most of the agents say, 'We're not interested in your work.'" Conover has since self-published two of his books, which he markets through his Web site, but he still yearns to be published.

So last year Conover enrolled in a new writing course offered by InsideSessions, a joint venture between Penguin Putnam and Universal Music Group. Advertised as an "Internet-based learning program that teaches you everything you need to know to transform your passion for writing into a published work," the distance-learning course features video clips of authors such as Kurt Vonnegut, Amy Tan and Alice Hoffman dishing advice about writing and publishing.

Like a multimedia version of a writer's conference or seminar, lessons include chestnuts such as: "Writing is dreaming on paper" and "the best way to learn to write is to write." As well as this tantalizing note: "Contrary to popular opinion, editors are looking for new authors."

But what really drew Conover to the class wasn't the course. It was the lure of getting his work read by a real Penguin Putnam editor. As part of "WritingSessions Plus," for a $119.90 fee, a 7,500-word excerpt of one of his manuscripts would be read and critiqued by an editor at one of the publisher's 27 imprints.

"It was a chance to have a professional editor really look at it, rather than just getting a rejection slip or some reader reading it as opposed to an editor," Conover says. It was his chance to finally get his foot in the door of big time New York publishing. Who cared if he had to pay a fee to do it?

Perhaps great, undiscovered literary talent isn't the scarcest resource in book publishing today. Maybe the rarer commodity is an editor's time. With tens of thousands of aspiring Jim Conovers knocking on the door, Penguin Putnam has found something to sell besides books. The business rationale: "We know about this business. We know about publishing. Maybe we can monetize that," says John Schline, a senior vice president for business affairs at Penguin Putnam.

Penguin Putnam is charging wannabe authors to teach them how to craft and submit their work to publishers for publication. The plan makes a certain kind of sense: After all, there's a whole cottage industry of writers conferences, magazines and guides preaching the gospel to aspiring authors. But a publishing company is closest to the ultimate prize, actual acceptance. It could charge writers extra for a bona fide book editor to explain to the aspiring writer why she wasn't buying his manuscript. Rejection as a revenue stream!

And sure, there's an outside chance that Penguin Putnam might discover the next Stephen King this way. But aren't book editors supposed to be in the business of paying writers for their work, not the other way around? John Hodgman, a former professional literary agent, says: "I know just how voraciously editors and agents are scouring the world for good new material. They don't typically need to be paid in advance to read it. If you're paying them to read your work, something has already gone wrong."

And can the attention of a top editor at a major publishing house really be bought for just $119.90? It turns out, no.

Conover's submission -- an excerpt from his third novel which starts with Jacqueline Kennedy being kidnapped by Mexican rebels during the Cuban missile crisis and goes from there -- was read and critiqued by a real Penguin Putnam editor, although Conover is not sure which one. His three-quarter-page critique came back unsigned with this final note: "We suggest when you feel your manuscript is ready for publication you consult 'The Literary Marketplace.'"

But he was one of the lucky ones, since he was one of the first to sign up for the course. When the program started, Penguin Putnam editors, including Phyllis Grann herself, then CEO and president of the company, were reading the manuscripts. (Grann conceived of the InsideSessions idea with Doug Morris, chairman and CEO of Universal Music Group, who drove the development of similar music business courses.)

But as the first wave of book manuscripts arrived, the dozen or so Penguin Putnam editors who were charged with reading and critiquing them quickly became overwhelmed by the new workload.

"We probably had not thought through carefully enough the burden we were putting on our editors, because our editors are incredibly busy," says Schline.

"What freaks me out is the detail that these manuscripts will be read by an editor who may not be a Penguin Putnam editor," says Harriet Rubin, who was the founding editor of the Currency imprint at Doubleday. "Having worked in publishing, I have seen that the word 'editor' is a loose term. They may have really wonderful readers, but you just don't know. I think an aspiring writer can be done much more harm than good with the wrong kind of editorial feedback."

And an aspiring writer, eager to make a connection, could be forgiven for falsely believing that their manuscript will definitely be reviewed by a real Penguin Putnam editor, who could actually buy it. One of the ads for the course running on Journalismjobs.com reads: "Wanna Get Published? Submit your manuscript. To a Penguin Putnam Editor. Click here to find out how."

The cheapest course offering, at $69.95, promises merely that an editor will look at your manuscript. For $69.95 you're guaranteed that someone -- not just a 22-year-old assistant or a mailroom clerk -- will see your work!

Jonathan Karp, a vice president and executive editor at Random House, thinks that the course is "an inspired idea" for Penguin Putnam, but he's less enthusiastic about it from the writer's perspective: "For new authors, it's just another possible way to get noticed. I suppose this is the literary equivalent of tipping the maitre d' in a busy restaurant. In all likelihood, you won't get better service, but at least you'll have the psychological comfort of knowing you tried. Personally, I'm against bribery, but I don't want to be judgmental about it."

But like the "professional editor" who now screens the book manuscripts, InsideSessions has hired someone specifically to listen to submissions. A public relations representative for InsideSessions declined to say exactly what the new executive's credentials were, beyond saying that he or she is an "A&R executive affiliated with Universal Music Group."

Apparently, whether it's in book publishing or the music business, there's only so much access $100 can buy. But the talent looking to be discovered: that's an unlimited resource. InsideSessions is considering starting a screenwriting course as well, for aspiring Hollywood scriptwriters. Can't you just see the marketing copy now? "Take 'FilmSessions Plus' where for $119.90, a professional studio executive will read and critique your script."

What's next? For $39.95, the William Morris agency promises that someone will listen to your voice mail message, and not necessarily return the call, but at least you'll know for sure that you were heard out. For $15 an editor at an online magazine will read your e-mailed story pitch. For $50, he'll respond!

There is always a chance that a real gem of a manuscript or a song will be submitted and get passed on to the right book editor or A&R executive who can actually sign a contract. That hasn't happened yet, but the course just started last October. In the meantime, InsideSessions is sponsoring 10 of their promising, unsigned bands to play on a secondary stage at the Locobazooka tour this summer.

As for Conover, he's still writing and still unpublished. But he's happy with what he got out of the course. He found value in the advice from published writers, as well as the book editor's critique of his manuscript. In fact, he's decided to start giving advice to other aspiring writers himself. Among his current works in progress are a how-to book titled "The Long Road to Becoming a Writer." It's a book of tips about pitfalls to avoid in the process.

After taking a look at the InsideSessions Web site, Geoff Kloske, an editor at Simon & Schuster, had this piece of advice for aspiring authors: "I find U.S.P.S. is the best way to submit your work to an editor, and last I heard a stamp was 34 cents."