By all means look away

The Daniel Pearl video combines sick political logic with the imagery of a snuff film, and tells us nothing we didn't already know about his twisted assassins. 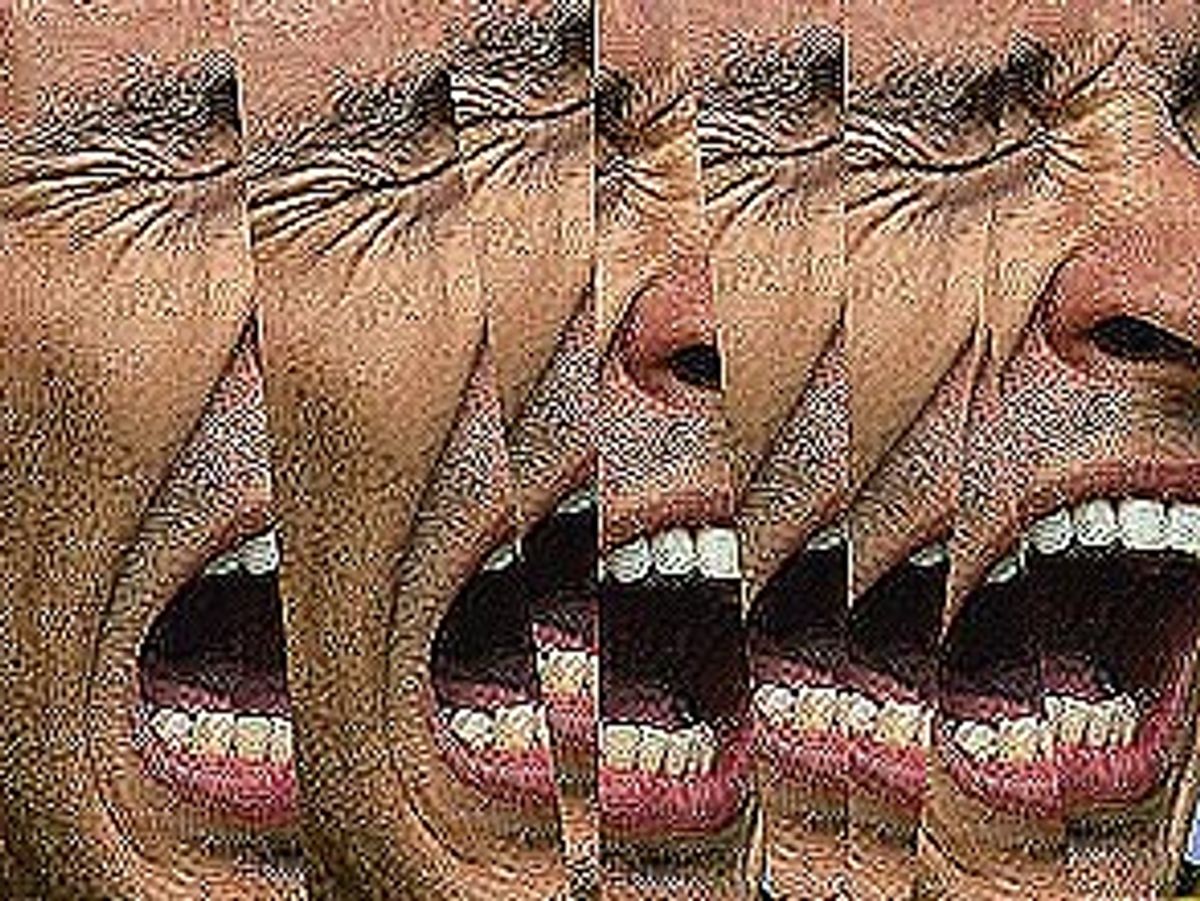 Yes, I have looked at it.

The Daniel Pearl murder video is more grotesque, sickening and disturbing than can possibly be appreciated without a viewing. It's not only the brutality, more than adequately described elsewhere; and not only the spectacle of Pearl's degrading and futile participation in his captors' anti-Semitic script. There's also the video production itself. I expected a crude equivalent of one of those old ransom notes made from pasted-up newspaper headlines. Instead it is relatively slick and professional, a paranoid montage of tangentially related images putting the dead reporter at the center of global Jewish conspiracy and Islamic revenge fantasy. The logic is that of a cult like Lyndon LaRouche, the images those of a snuff film.

Over the last few days, debate has raged over whether the Boston Phoenix and its publisher, Steven Mindich, were justified in posting a prominent link to the Pearl murder video -- the first direct access provided by a U.S. news organization, in direct defiance of the wishes of Pearl's family.

In a way, I am precisely the individual Mindich had in mind. I never would have spent even three minutes burrowing through Google to find that video; the search would have seemed like a voyeuristic quest. The Phoenix's one-click link changed that. I justified viewing by telling myself that I am a reporter who writes about terrorism and violence and crime. I am a reporter and have a responsibility to witness atrocity, I said, even if it is through the video lens of its perpetrators.

But let's be honest. Of all the pundits who have weighed in for and against the Phoenix's posting, I have found not one who admitted searching the Internet for the Pearl video prior to Mindich's decision -- which I or any of us would have done if gaining some insight into Pearl's killing was our most important motivation. No, it's just that the Phoenix made it so easy to indulge tabloid, voyeuristic, ambulance-chasing bravado, my own included.

What is really at stake here? A few weeks ago, the FBI very nearly made the Pearl video a censorship issue by trying to convince Web site Prohosters.com to removing it from a customer's site. Prohosters properly refused. By the time the Phoenix posted its link to Prohosters, defending free speech was simply off the table. Nor could the Phoenix claim to be publishing some previously unavailable material. All publisher Mindich was doing was promoting the video, encouraging more widespread viewing of a sick and troubling document.

So was he justified? Reporters, photographers, editors and producers are continually making decisions about the outer limits of acceptable brutality. From the most anonymous crime scene to world-scale wars and disasters, the choice of what to show and not show is made in newsrooms every day. And it is a hard job, balancing the sensibilities of survivors, real news value and demands of editors clamoring for sensational front pages. I remember a photographer on one of my first newspaper jobs threatening to quit if the editor ran a particularly gruesome photo of a car wreck. David Handschuh of the New York Daily News says he will simply never print many of the pictures he shot of victims at the World Trade Center on Sept. 11. These are questions not just of "taste" but profound judgment calls about whether explicit images really aid public understanding -- or simply cause private anguish for victims while brutalizing public sensibility.

Mindich himself gives one argument for promoting the tape of Pearl's killing: It is the only way to appreciate the magnitude of what we are up against. "If there is anything that should galvanize every non-Jew-hater in the world -- of whatever faith or of no faith -- against the perpetrator and supporters of those who committed this unspeakable murder -- it should be viewing this video," he writes. Others, including Salon's Samuel G. Freedman (who I have known and admired for years), amplify Mindich's argument, comparing the tape to the famous Vietnam photo of a naked and burned girl fleeing American napalm, or the first explicit photos of Nazi death camps.

All of which might make sense as an argument to rile up a complacent nation, if Americans remained unconcerned about the threat posed by Pearl's violent, fundamentalist, anti-Semitic killers. In the cost-benefit analysis of media, shocking an apathetic public into action can justify a lot of tough decisions.

But is that kind of genuine shock value justified here? Since Sept. 11, the American public has been drenched with images of flaming skyscrapers, the sight and sound of bodies falling to the sidewalk, the bloody aftermath of suicide bombings in Israel. It hardly took Pearl's video to convince most Americans, and much of the rest of the world, that al-Qaida and allied violent sects represent a real threat. Somehow the nation stood behind President Bush's decision to oust the Taliban without viewing Pearl's decapitation.

That famous Vietnam picture had meaning because of a raging debate over the morality of American bombing and the justification for the war's escalation. The Pearl tape touches no such divide -- certainly not in the United States, the only audience likely to seek out a Boston alternative weekly. Photos of Auschwitz documented unprecedented atrocity on a mass scale that literally could not be believed. The Pearl murder video accomplishes no such documentation; its details have been published, and excerpts of Pearl's coerced statements broadcast, for months. The Phoenix upped the ante on brutality, but added nothing to public knowledge or debate.

I'm even more troubled by another argument made by some of Mindich's defenders: that the sensibilities of victims -- like Daniel Pearl's family -- are not the problem of reporters. Something called news value trumps the desire of Pearl's family to keep circulation of his murder video to a minimum, just as it does when reporters knock on the doors of "ordinary" survivors of high-profile crimes.

I'll have to confess that this is not an abstract issue for me. Eight years ago I was stabbed by a psychopath in a New Haven cafe, along with six other people, and a local television news crew captured the image of my bleeding body on a gurney. The repeated replaying of that footage on television, the pursuit of some victims by aggressive camera crews, still stand out for the distress they engendered in my family and myself, for months afterward. On the other hand, some reporters handled the story with the greatest respect, which went a long way toward convincing me that my profession was not hopelessly cynical.

The idea that tossing the desires of Pearl's family into the ashcan is "just what journalists do" is only a cover for indiscriminate National Enquirer logic. In fact, some reporters and editors years ago began challenging the old "if it bleeds, it leads" sensibility with careful judgments about the impact of news decisions on victims. Few newspapers now print the names of rape victims -- once commonplace. In televised murder trials, gruesome crime-scene photos are usually kept off-camera and off the front pages. To claim that dismissing the concerns of the Pearls is "just our job" disrespects these complex ethical decisions made in newsrooms every day.

We journalists too often use the First Amendment as cover for shrugging off the consequences of our news choices on the individuals we cover. Yet the extraordinary power of stories and images to injure their subjects, to rob those depicted of dignity and to stimulate the worst human impulses, is one of the reasons freedom of the press is such a high-stakes commitment for a democracy.

From the Oklahoma City bombing and now al-Qaida's attacks, the American press has learned a lot about dignified and respectful reporting on victims of atrocity -- think of the New York Times' "Portraits of Grief" series. Hard decisions about which images to broadcast and print will emerge with greater frequency as the anniversary of Sept. 11 approaches. But far from clarifying the issue, the Boston Phoenix's promotion of the Daniel Pearl murder video -- publicizing a paranoid propaganda tape and encouraging voyeurism at the expense of a dead reporter's family -- only muddies the difficult choices to come .