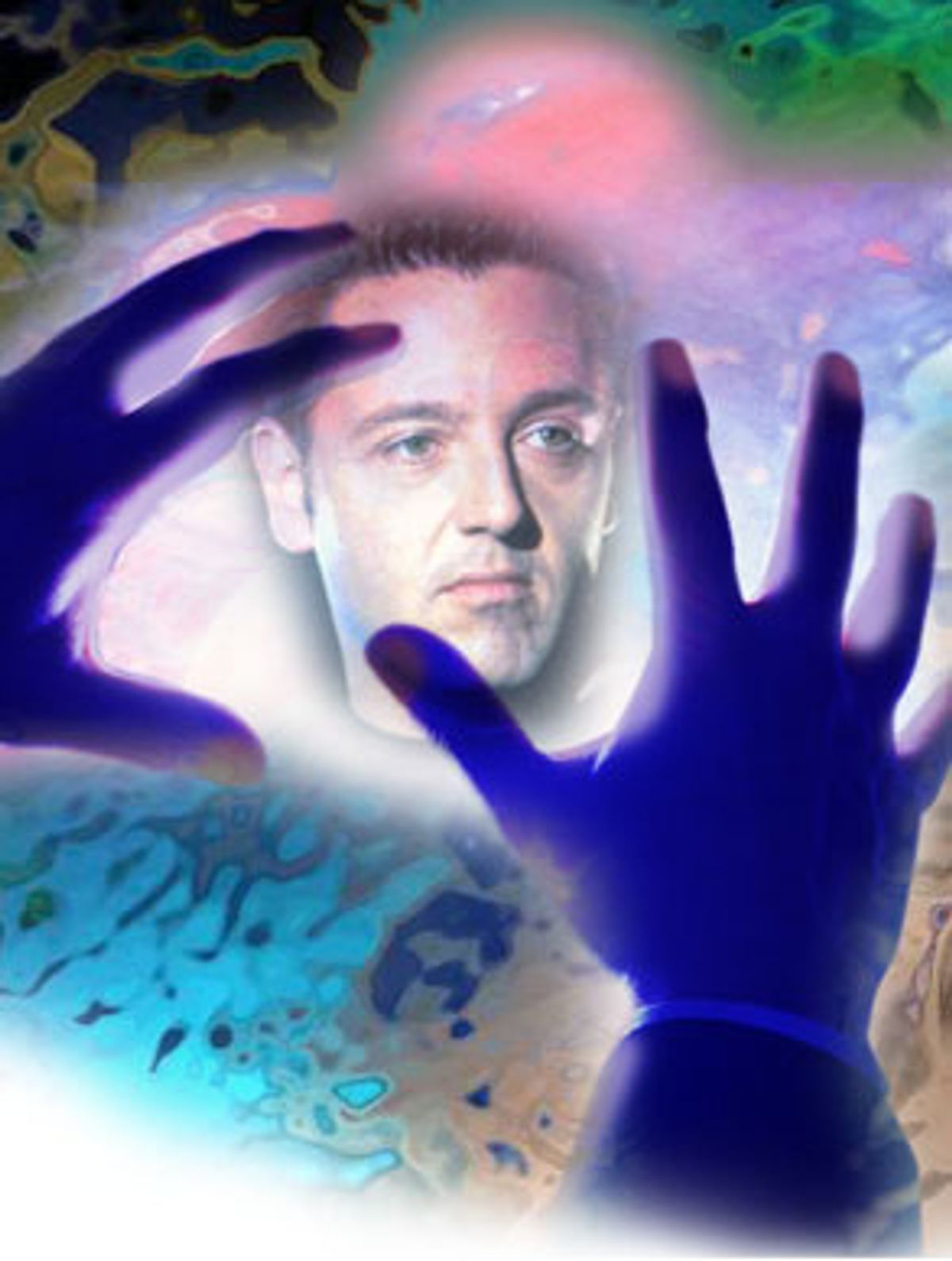 John Edward, host of the television series "Crossing Over," is just short of creating an empire of Oprah or Martha Stewart proportions. His show, a half-hour exhibition of his self-professed ability to communicate with the dead and predict the future, now airs on CBS and Sci-Fi at least 10 times a week. Author of three books (his second, "One Last Time," was a New York Times bestseller), subject of an HBO documentary, guest of "Larry King Live" and "The Crier Report," and celebrated counselor to a host of B-list celebrities (Jennifer Beals, Anne Rice, et al.), Edward has gained surprising credibility.

He has managed to sell his talents via audiotapes ("Developing Your Own Psychic Powers," yours for $59.95), a quarterly newsletter, internationally touring seminars (sold out), private readings (the wait list is now three years) and personally endorsed products like the John Edward Pink Rose Appreciation Pin, "a symbol to express love."

But Edward, a 32-year-old native of Long Island, has not fessed up to all of his talents. As it happens, he is more than a psychic medium; he is also a master statistician. The smoke and mirrors behind his self-professed ability to communicate with the dead is a simple application of the laws of probability. Basically, if you keep trying something whose results are independent, your odds of getting your desired result increase.

Lucky for Edward, most audience members on his television show are too hopeful and trusting to pull out a calculator and expose the charlatan behind the prophet.

The temptation to believe that Edward, a self-professed medium, can connect with the deceased and foretell future events is great, especially for those who are vulnerable and in need of comforting. Many members of the show's audience, hoping to connect with deceased loved ones via Edward, are mourning recent losses. They come with the expectation, no doubt, that being "read" by Edward on national television will yield healing revelations from those who have "crossed over." Inevitably he reports that the dead are at peace, happily and lovingly watching over those left behind on Earth.

Since Edward is playing a numbers game, there are, of course, rules to follow. "Crossing Over" audience members are coached even before they enter the television studio on how to behave during taping. The rules for being in the audience are stated on the show's Web site and begin with the following:

"Have no expectations. You may REALLY want to connect with one specific relative ... but there is a good chance they may not come through. Keep your mind open and welcome whoever comes through during the reading. We don't want you to be disappointed or broken-hearted if your chosen loved one doesn't come through. As John says, 'Please do not put earthly expectations on a heavenly experience.'"

Seems fair enough. But apparently still too risky for Edward. The rules on the Web site continue:

"Validation is important! Since John does not know your friends and relatives, it is very important you give feedback. A simple nod of the head, a yes or no answer goes a long way in a reading. Please don't give more information than John asks for."

Translation: John will throw out guesses until you indicate he has hit on something, and then he'll run with it. Should his ramblings contradict your reality, do not correct him.

Even more precious is his allowance for any and all errors, which he disguises as a modest admission of mortality in his book "Crossing Over: The Stories Behind the Stories." Edward writes, "I'm always saying that it is not the spirits who are getting it wrong; it's more likely that I am misinterpreting their messages." You have to trust a guy so willing to admit his own failings.

In his book, Edward offers an example of his powers that is so dubious I thought he was joking. As it goes, once he told a "sitter" (the person being read) that someone in her life was doing something with wallpaper; it was odd, Edward recalls, that it had no meaning for her that day. Until, lo and behold, a few months later, the sitter's sister-in-law changed the border in her bathroom! Add up the probabilities of the hundreds of independent events involving wallpaper and the sitter's friends and family over the course of months and the realization of his prophecy is nearly inevitable. The art of intelligence insulting has rarely known such mastery.

Adding to the speciousness of the whole operation is that the wallpaper example was handpicked for inclusion in the book; consider how many failed readings were excluded. The careful plucking of successes from a mass of attempts is a technique used in Edward's television show as well. The creation of each half-hour episode requires six hours of taping. Do the math.

Yet it works. I prefer to believe Edward's fans are not unintelligent, but simply in need of something to believe in, to feel good about, or to relieve the anxiety of what cannot be controlled. If he is fulfilling these needs, then in some ways, his gig is legit. Just like playing the lottery, if you really want to believe, you are better off not knowing the odds.

Shari Waxman is a writer in New York.