"The Dangerous Lives of Altar Boys"

Jodie Foster makes a mean ol' nun, but the rest of this coming-of-age tale suffers from simply trying too hard. 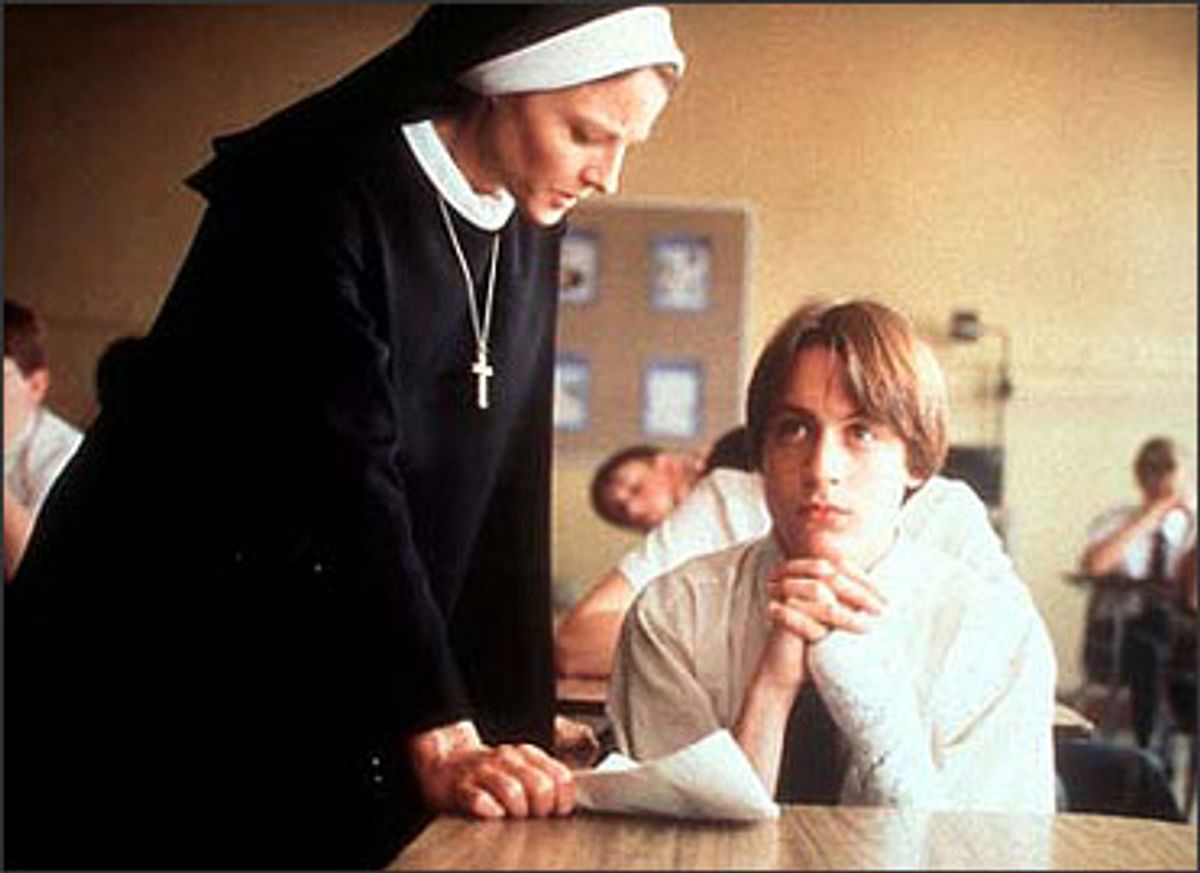 Young teenage boys are one of the great mysteries of the world, perhaps because they're most mysterious to themselves. That's the vein that Peter Care's well-intentioned coming-of-age movie "The Dangerous Lives of Altar Boys" tries to tap, but the juice comes out only in dribbles. The movie, based on the novel of the same name by Chris Fuhrman, tells the story of two best friends and womb-to-tomb partners in crime, Tim Sullivan (Kieran Culkin) and Francis Doyle (Emile Hirsch). They attend a Catholic school ruled by the iron habit of Sister Assumpta (Jodie Foster), a holy terror with a peg leg and, scarier yet, a disapproving hyphen for a mouth.

Tim and Francis, along with a few other pals, have channeled their hatred of Sister Assumpta and their frustration with the world (and adolescence) in general into a graphic comic book, replete with blood, gore and naked girls, as well as superhero stand-ins for themselves. But of course, they also have a sensitive side, dappled with traits they haven't yet been able to incorporate into their rustic idea of manhood: Tim loves William Blake; Francis is nurturing a tender young bud of love for the school's smart, offbeat beauty, Margie (Jena Malone). The movie explores the turf you'd expect, particularly Tim's involuntary resentment of Francis' new preoccupation with his girlfriend, but it does manage to tread some sensitive territory without getting too squidgy. It also captures the texture and mood of lower-middle-class suburban life in the '70s -- a world whose boundaries were measured only by how far and how fast you could pedal out of it on your banana-seat bike.

Yet "The Dangerous Lives of Altar Boys" is undone by simply trying too hard. This is Care's feature debut, and although he's an attentive filmmaker, he's also something of a shaky one. This movie's themes and issues are writ so large that they almost swallow the story whole. At one point Francis, frustrated with Tim's outlandish scheme to capture a mountain lion from a local wildlife park and sic it on Sister Assumpta, lashes out at him: "Not everyone has to make up trouble for themselves just because they're bored." Yet over and over again, the movie does just that as it trundles along to its highly schematic climax.

It's not enough to show these boys getting on with the heavy business of their lives, which gets even heavier when Margie unloads a deeply troubling secret on Francis: There has to be a major, life-altering event at the end. That it's brought about by the boys' own stupidity and recklessness is supposed to be something of a tragedy. Yet as you watch them bumble toward inevitable danger, you think, "What dopes!" All kids do stupid things, but past a certain point -- remember those stories of adolescents who lay down in the middle of the highway because they saw people do it in a movie once? -- you wonder if it isn't simply natural selection at work.

That's one of the most frustrating things about "The Dangerous Lives of Altar Boys": It's hampered by the sense that a story about growing up and having strange, conflicted feelings isn't quite enough by itself. Both leads are earnest, hardworking actors, and Culkin in particular manages to give his character some fine shading. But the movie's animated sequences -- in which the superheroes the boys have created act out metaphor-laden exaggerations of their own lives -- feel stuck-in and awkward, even though they're nicely executed.

The boys' relationship with the stern Sister Assumpta doesn't register as anything other than a device. We're supposed to understand that she feels gruffly protective of them, which Foster telegraphs now and then with a subtle softening of the eyes. But as there's so little interplay between them beyond overt antagonism, it's hard to understand why. We don't see her making the remotest effort to understand them, nor they her. Care wants us to understand that she's not the straight comic-book villain that the boys see her as, but he doesn't give us much else to go on.

Care burns lots of teenage fuel to get "The Dangerous Lives of Altar Boys" going, and sometimes it actually takes off. There are moments when the picture perfectly captures the mindless energy of teenage boys at play as they steal away to smoke cigarettes, drink dreadful patchwork cocktails made from every random drop of alcohol they can pilfer and rehearse their Pete Townshend windmills on a makeshift stage. That's when the movie really does feel like a "Tyger! Tyger! burning bright." But that's before it's been thoroughly doused with metaphors and meaning, leaving only the smell of damp fur behind.