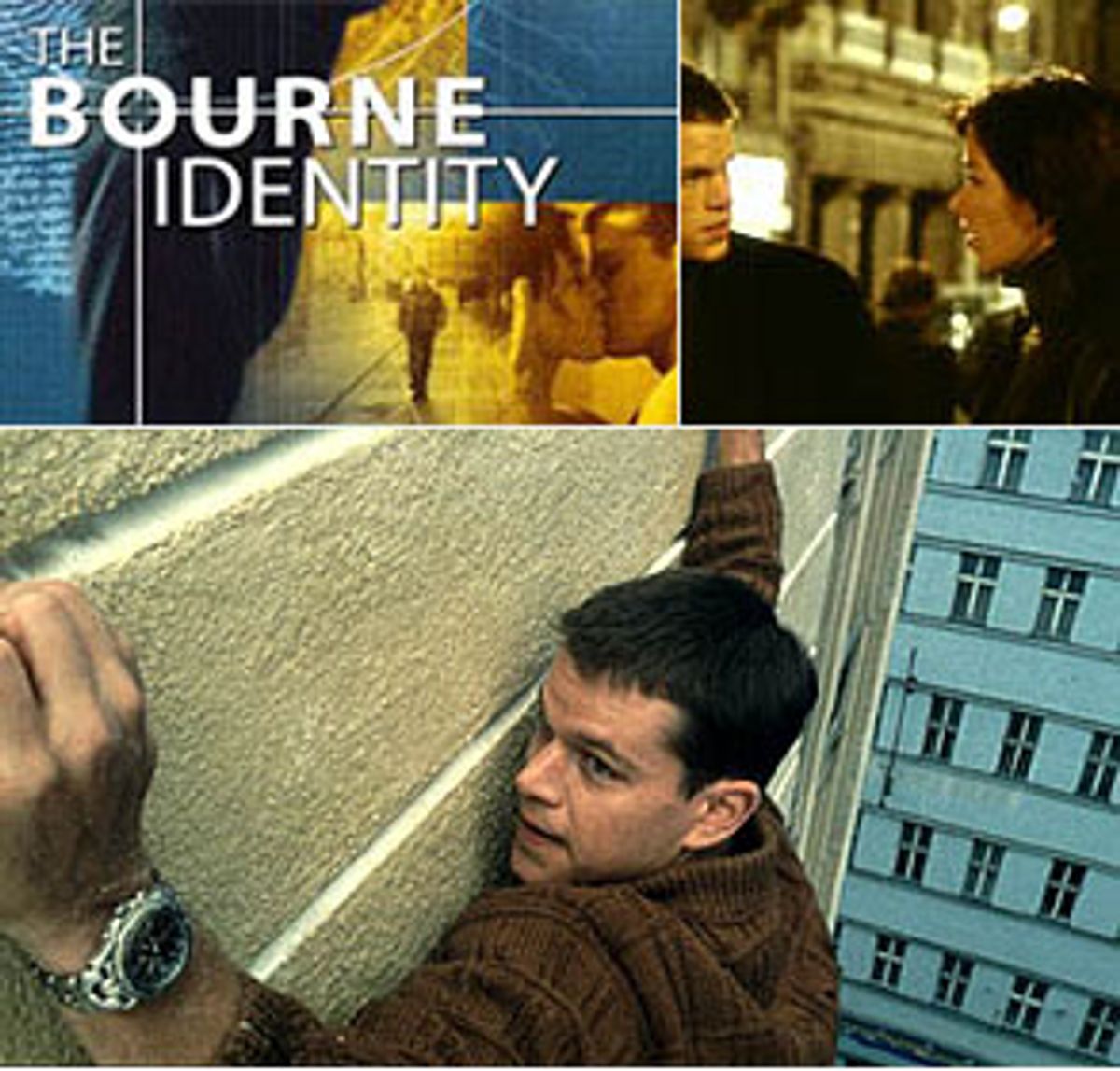 Some performers seem destined to be in films because of the transparency of their emotions. Their faces almost become movie screens; everything going on inside them flashes across their countenance with an indelible clarity.

The German actress Franka Potente (best known here for "Run Lola Run," in which her pumping limbs and rippling skin carried all the movie's emotion) is one of those performers. In the new spy thriller "The Bourne Identity," we watch as fear, anxiety, grief, shock and a host of other emotions scurry across her face. Potente's is an unusual beauty. Her long face, dark eyes, and wide, downturned mouth combine to make an angular mask of sorrow. Even her smiles seem tinged with sadness. In moments of tension, the only noticeable change in her face is the furrowing of her brow. That seeming stillness is deceptive. Potente transmits the charged aura of someone whose nerve endings never sleep. She can seem as fragile as a woodland creature with its ears cocked for danger. After watching her for a while, you start to believe you can actually see her thinking.

As Marie in "The Bourne Identity," a student vagabond who impulsively helps out a young American on the run and finds herself involved in international intrigue, Potente becomes the vessel through which we watch the movie. Her companion, Jason Bourne (Matt Damon), is an amnesiac who woke up on a Russian fishing trawler after being plucked from the sea with two bullets in him. He doesn't know any more about why he's been targeted for death than Marie does, and he doesn't know where he learned the survival and fighting skills that get him out of one scrape after another.

Marie doesn't have those instincts, so when violence erupts, she watches frozen and scared. During an early brutal fight in a Paris apartment, there's a fleeting shot of Potente taking in the mayhem, caught by surprise and too horrified to turn away. In that brief moment her inability to stop looking at what's taking place in front of her makes you feel the events imprinting themselves on her mind. And as Marie's feelings for Bourne deepen, Potente holds out a mournful potential for tenderness in the midst of violence. It's a terrific performance.

Potente is the movie's biggest human factor. But not the only one. Entertaining, handsome and gripping, "The Bourne Identity" is something of an anomaly among big-budget summer blockbusters: a thriller with some brains and feeling behind it, more attuned to story and character than to spectacle. The exciting action sequences, for the most part efficiently and clearly shot and edited, serve the story instead of overwhelming it. "The Bourne Identity" is just good enough to make you wish it were truly first-rate and that the script -- adapted from Robert Ludlum's 1980 thriller by Tony Gilroy and William Blake Herron -- had memorable dialogue instead of being merely serviceable. For that matter, I wish the direction of Doug Liman were sharper and that he had the resources to provide the depth he's aiming for rather than to just suggest it.

Still, it's the first movie that makes it possible to believe in Liman as a filmmaker. "The Bourne Identity" will probably produce the predictable grumblings that the director of the heralded indies "Swingers" and "Go" has turned to a mainstream Hollywood package, even though his work here is in every way an improvement over those pictures. "Swingers," much beloved by its fans, barely seemed like a movie to me. It played like an overextended, self-congratulatory sketch for the lounge kids who buy Sinatra records as kitsch artifacts (and who probably haven't seen the same material, done infinitely better, in "Diner"). "Go," with its gimmicky time structure and easy pop nihilism, was Liman's bid to become the teeny-bop Tarantino, but about the only thing the movie had going for it (and the only thing I retain) is Katie Holmes' smile.

"The Bourne Identity" flirts with some of that movie's flash. There are sudden edits or showy camera moves that are unnecessary because Liman does a fine job of building tension without them. And Liman hasn't figured out how to transcend the limitations of genre in the way that, say, Brian De Palma has or that Philip Kaufman did in "Rising Sun."

But the movie is professional, confident and, more important, coherent in a way we can no longer take for granted in studio releases. Not when the likes of Michael Bay have reduced action movies to disconnected bits and pieces, not when most big-budget thrillers are so in thrall to effects and splintered editing that there's no way of telling what's going on in the action sequences. This is the third spy movie I've seen in the last few weeks. And it may not be much of a compliment to Liman to say that it puts to shame the ponderous, self-important "Sum of All Fears," which has all the style and excitement of a suit sale at Robert Hall, or "Bad Company," a piece of high-concept turkey rotting on the screen. But even on its own terms, the movie is engrossing and reasonably intelligent, and it feels as though it was made by individuals instead of by committee.

The moral dilemma that "The Bourne Identity" presents emerges when the hero discovers his true identity as a CIA assassin. Part of an elite, rogue team of killers stationed in cities around the world, Bourne is marked for death by the agency after failing in his mission to assassinate a former African dictator. The stirrings of Bourne's conscience don't resonate as deep as they seem intended to, but they aren't easily sloughed off, either. With a PG-13 rating, "The Bourne Identity" isn't particularly explicit, though the violence is nasty. The nastiness is the point. If the violence doesn't have the visceral shock or moral complications of the violence in a De Palma or a Peckinpah film, neither is it put on the screen to thrill us. Without lingering sadistically on anything, Liman does something that's become rare in commercial movies: He associates violence with pain. When a man falls down a flight of stairs we see his head bumping the steps. When a cop flips off his motorcycle during a chase, we see him sliding along the pavement.

You don't cheer Bourne dispatching the CIA hit men sent after him. Damon makes you feel Bourne's revulsion at what he has to do. And Potente's presence reinforces that revulsion. She's seeing death and killing up close for the first time, and it rattles her. (After her first violent encounter, she throws up. That bit of puke is a sign of the movie's integrity.) The screenwriters don't provide the reasons the CIA wanted that African politician dead. In the movie's scheme, whatever those reasons are, they pale beside the cold, premeditated taking of human life.

The story slows down whenever the action switches to Langley, where Bourne's CIA handler (Chris Cooper, proving you should never trust a man who wears short-sleeved dress shirts) and his wonks try to ferret out their killer on the loose. But Liman uses the insulation of their airless techno bunker, with its computers and phone lines, as an effective contrast to the gorgeous, wintry Paris and Prague (standing in for Zurich) through which Damon and Potente skitter. Shot by Oliver Wood, the movie imparts an Old World chill that emphasizes the warmth of the two young leads.

This may be Damon's bid to become a viable action star. Likable as he is, there's still something a trifle blocked about him, a touch of callowness that keeps Bourne's moral predicament from having the urgency it should. Which is not to say he's not sympathetic, just that he seems more kid than hardened pro. But you only have to contrast this performance with the generalized, directionless intensity Tom Cruise brings to his action roles to appreciate that Damon has chosen to play a human being instead of an action figure. His finest moments are near the beginning, when the still-amnesiac Bourne is rousted by two cops while sleeping on a Zurich park bench. He registers surprise when he finds he's able to answer them in German and there's a hair-trigger pause in the seconds before he realizes he has the fighting skills to disarm them that makes the swiftness of his subsequent action both funny and startling.

Liman serves the supporting actors less well than his leads. He wastes Brian Cox, grim and official as a CIA muck-a-muck, and Julia Stiles, whose role consists almost entirely of sitting in a room in Paris monitoring computers and answering phones. The most preternaturally composed young actress in the movies, Stiles makes you believe she has the sand and the steady nerves for undercover work. But the one shot of her out of her office, at a secret nighttime meeting on a Paris street, makes you long for what she could have done. In her beret and overcoat she looks as if she's stepped out of some wartime espionage romance. (If they ever get around to filming any of Alan Furst's World War II-era spy novels, they could do worse than to look at that shot of Stiles.)

As one of the assassins sent after Bourne, Clive Owen is very nearly similarly wasted, though his eventual encounter with Damon makes you understand exactly why he took this small role. Owen effortlessly captures what the movie strains to convey: a spy's moral queasiness with his work. It's one of those small, brilliantly acted moments that linger in the memory.

I hope that the qualified praise I've given "The Bourne Identity" doesn't make me sound ungrateful for the pleasure it gave me. Liman manages a certain tough-mindedness here without giving in to cynicism or hopelessness. (The movie's sunny final scene feels earned.) And he shows an awareness of craft and narrative cohesion that makes me hope he continues to develop those qualities, which mainstream Hollywood filmmaking so desperately needs. The old question of how you make spy movies or write spy thrillers after the end of the Cold War has now been replaced by the question of how you make them after Sept. 11. "The Bourne Identity" invokes a different kind of nostalgia: the memory of what it's like to go to a Hollywood movie and be treated with decency.