In Dallas, America's Catholic leaders were forced to crack down on abusive priests, but they were too afraid to explore the root cause of the problem: Human sexuality. 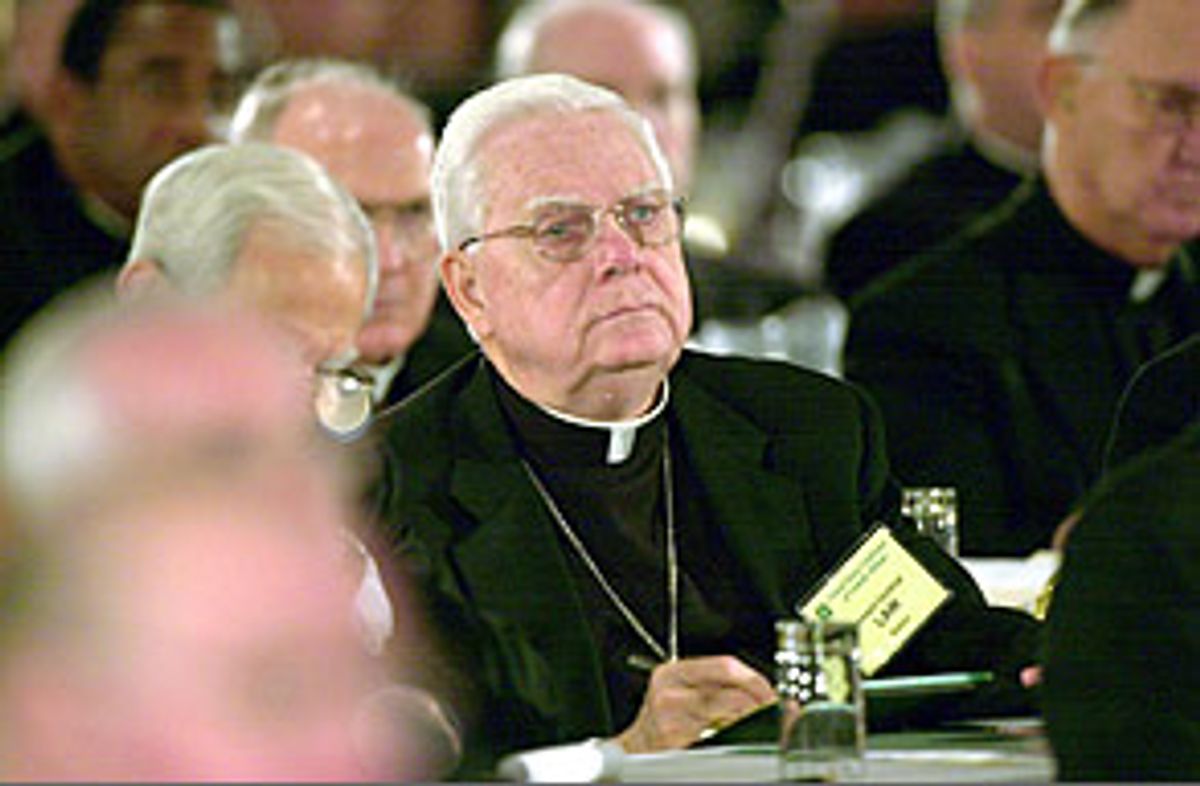 Dallas' Fairmont Hotel during this week's bishops conference reminded me of the Palace of Versailles after the First World War. In both buildings delegates in black frock coats, real or virtual, crowded spacious halls, their images bouncing back to them -- in Versailles from the mirrored walls and in Dallas from the glassy eyes of the television cameras.

Both treaty-making groups contained idealists and politicians who had grown up in one era and found themselves in a place and state in history they did not know and whose language they could not understand. Both groups were well practiced, however, in looking solemn as they bent to the tasks of drafting pacts for wars they had backed into years before, confident that they could keep control without changing an old world and their comfortable places in it.

Only after unimaginable numbers of casualties piled up on a hundred battlefields -- as grisly and unnecessary sacrifices to their arrogance -- had the leaders begun to realize that this had been a war like no other, out of everybody's control from the start. Why hadn't somebody told us about this? Their white-haired heads bobbing as they conversed, they barely understood that the war had destroyed, for victors and vanquished alike, their world and the royal pattern of privilege and domination that they had presumed was God's idea in the first place.

More than anything, more than their honor, these delegates from different centuries wanted to save their pale, never-in-the-sun skins. They had no ability to understand, let alone do anything about, the true causes of the war they so wanted desperately to end. This lack of insight, and their own impacted passivity, led them -- after hours of obsessively carpentering words into the text ("I direct the chair's attention to the word 'credible' in Line 100") -- to kill the larger meaning and endorse harsh punishments, without so much as the smallest wonder if they would bring any lasting settlement.

The bishops in Dallas followed their accustomed style by finally accepting harsh, no-exemptions policies to remove priest abusers from face-to-face contact with parishioners after one incident. They backed into this -- their standard operating procedure -- only under enormous pressure from their own Catholic people. And nobody was sure whether it would be enforced rationally or applied differently in each of the almost 200 dioceses. Passive is as passive does, and these bishops betray not a glimmer of insight into their habitual wait-and-see syndrome that, if Rome were burning, would have them put down their fiddles and take 10.

These same bishops have been passive to a generation and a half's worth of warnings about troubles brewing in priests with psychosexual conflicts. They listened to reports in 1971 from the multidisciplinary study of the priesthood (that they had themselves funded), including psychological results that described a large cohort of priests as psychologically underdeveloped. They heard, they frowned, shrugged, and went home. Ten years later, they heard the first reports of priest sex abuse.

They managed to ignore the 1985 memorandum by Father Tom Doyle in which he prophesied that, if they did not act, the sex abuse by priests would harm thousands of people and cost up to $1 billion a year. They put off the study of this problem proposed by Chicago's Joseph Cardinal Bernardin in 1986 and resisted adopting a national policy on the problem until this year in Dallas.

Nothing symbolized their current passivity better than the empty chairs in the Fairmont left by several American cardinals who did not show for the final press conference; they had gone like good little boys to Rome to meet with the pope on the matter.

They leave Dallas as passively as they entered, and they could not have symbolized it better if they had used skywriting. While they are ready to throw away the key on priests accused of sexual molestation, they struggled to exempt themselves -- that is, bishops who knowingly covered up and/or reassigned sex abuser priests -- from having any action taken against them.

As unable as the stiff-collared Versailles delegates were to understand that the old world they grew up in had changed utterly, these white-collared bishops are shielding themselves, as men did in the desperate trench warfare of World War 1, with the bodies of their priests. They've let them pile up like sandbags while we go back to the officers' club. The peace made at Versailles was no peace, and the one in Dallas might as well have been written on a white flag of surrender.

These bishops back away from looking into the human sexuality that they so self-righteously try to supervise from their pulpits. Because they are very uneasy about sex they have failed to ask the most important question concerning this scandal: What are its causes? Sure, it occurs elsewhere, but how could it have taken root in the lives of men carefully selected and trained for selfless service? To enter the penalty phase and to make pledges about the future without asking the really hard questions about the origins of this problem resembles setting up clinics to treat plague victims without identifying and eliminating the source of infection.

But the bishops, accustomed to people saving seats and parking spaces for them, are passive to the end. They let others suggest that pedophilia is caused by homosexuality when there is no evidence to support it; they raise no objection when the pope tells them that they may not discuss celibacy when it's clear that this discipline cries out for examination. Any organization that insists on celibacy and fails to acknowledge that it is necessarily connected with human sexual expression is buying time, and not much of that, before further problems appear as symptoms of the same unresolved attitudes.

The examination of how priests understand their own sexuality -- and the bishops cannot exempt themselves from this -- is a key element of the problem. This edging away from the sexuality that is at the center of all life may be the best that the bishops can do at this time. But that reveals the Dallas/Versailles problem perfectly: If this is the best that they can do, they have confessed their impotency. It is this impotency in the face of sexual violation that is the central revelation of the Dallas meeting. This impotency -- this inability to act in a masculine manner -- is what draws criticism from their Catholic people and inspires more than a few of them to say that nothing less than the resignation of all these bishops will suffice to make a true start at understanding and resolving this painful problem.