A leading FBI critic with her own theories about post-9/11 anthrax attacks makes a quiet visit to Capitol Hill. 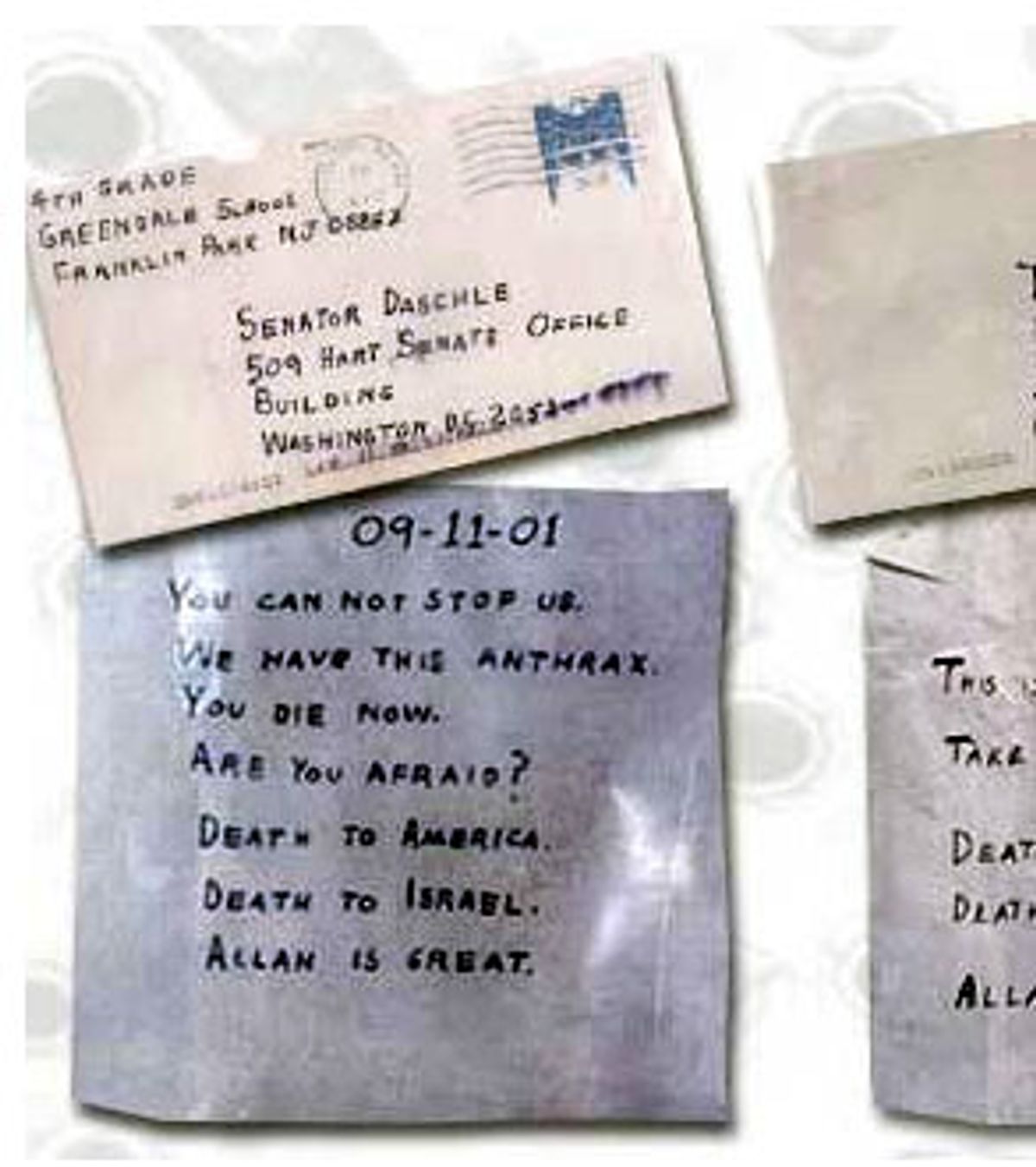 The scientist who has been a persistent thorn in the FBI's side over its handling of the anthrax investigation finally got her audience in Congress this week. As the FBI continues to investigate who was behind domestic anthrax attacks last fall, Barbara Hatch Rosenberg came to Capitol Hill to brief Senate staff members about her own widely disseminated theories of who may be responsible -- and how the FBI has botched the search for the anthrax mailer.

Rosenberg, who chairs the Federation of American Scientists' Chemical and Biological Arms Control Project, met with staff members for senators Tom Daschle, D-S.D., Patrick Leahy, D-Vt., and Chuck Grassley, R-Iowa, on Tuesday to discuss the ongoing anthrax investigation. Anthrax was mailed to the offices of Daschle and Leahy and to several media outlets last fall. The attacks killed two Washington-area postal workers who were apparently exposed when spores from the Daschle letter seeped through the envelope. A Connecticut woman, a New York City hospital worker, and the photo editor of the Sun, a tabloid in Boca Raton, Fla., also died from anthrax spores. No arrests have yet been made in the case.

The meeting, which was requested by Rosenberg, lasted about 90 minutes. After Rosenberg left, Senate staff talked to FBI representatives for an additional 45 minutes.

"They discussed her letter, which has been online for sometime," said one Senate source, referring to writings posted on the FAS Web site. "She answered questions from the staff members and the FBI, but she was not asked, and did not identify, any individual in conjunction with her letter."

Rosenberg did not return repeated calls from Salon seeking comment.

Rosenberg has written that the anthrax mailed last fall originated from the U.S. Army Medical Research Institute for Infectious Diseases at Fort Detrick, Md. Rosenberg has pinpointed, but not named, a microbiologist who used to work at Fort Detrick as the prime suspect, someone whom she characterizes as depressed and who has already been questioned by the FBI.

In general terms, the FBI's profile of the suspect and Rosenberg's are similar. In January, the FBI said the anthrax suspect "might be described as 'standoffish' and likely prefers to work in isolation as opposed to a group/team setting," it said. "It is possible this person used off-hours in a laboratory or [borrowed] equipment to produce the anthrax."

That meshes with Rosenberg's profile of the anthrax mailer, which she last updated on the FAS Web site in February. "He must be angry at some biodefense agency or component, and he is driven to demonstrate, in a spectacular way, his capabilities and the government's inability to respond," she wrote. "He is cocksure that he can get away with it. Does he know something that he believes to be sufficiently damaging to the United States to make him untouchable by the FBI?" Rosenberg also believes the person who sent the anthrax is the same person who tried to frame an Egyptian-born scientist, Ayaad Assaad, who was once a biowarfare researcher at the lab.

Though she remains coy in her February commentary, the scientific community all understands Rosenberg's implication -- perhaps the anthrax mailer has evidence that the United States has produced high-grade anthrax for offensive use in violation of the Biological Weapons Convention Treaty. There has been much speculation about American compliance with the treaty since the anthrax letters were discovered, but there is no proof the United States has violated the treaty.

While some have scoffed at her claims, the FBI may be coming around to her assessment -- if not of the specific person responsible for mailing the anthrax, then at least that the mailing was generated by a Fort Detrick insider. Government scientists interviewed by the Hartford Courant last week said the FBI appeared to believe that the anthrax originated at Fort Detrich, as Rosenberg has long charged, and that someone with access to the government's labs may have been the mailer.

Rosenberg also writes that she has learned that the FBI agents have searched the house and computer of the scientist Rosenberg believes mailed the anthrax. In her February letter, Rosenberg had harsh words for the FBI and the way it was conducting its investigation. "Blanketing Central New Jersey with fliers showing handwriting that was obviously disguised can't possibly evoke useful information, nor can letters to 32,000 American microbiologists, 31,800 of whom live in a different world from the perpetrator. This is no way to instill public confidence in the competence of the FBI," she wrote. "Most importantly, the apparent lack of action is sending a dangerous message to potential bioterrorists."

Rosenberg has also openly speculated that the anthrax mailer is a contract worker for the CIA, and that the letters were some kind of CIA-approved experiment to test how the United States would react to a biological attack.

Steven Block, a professor of biological sciences and applied physics at Stanford University and a bioterrorism expert who has monitored the speculation, says, "I'm hoping Barbara turns out to be wrong, because if she's not, it says something very bad about what's been going on in the United States government."

"Personally I find that theory hard to believe," Block says. "But then again, I also find it hard to believe the FBI hasn't made any progress at all in this investigation."

Rosenberg has her critics. The Weekly Standard ridiculed her "sensational pronouncements" and "surprisingly unscientific, even Oliver Stone-scale, incaution about the 'facts' at her disposal." When asked if Rosenberg was considered a credible source, one Senate staffer said, "That's what we're trying to figure out."

But Block says Rosenberg is highly regarded in the bioterrorism scientific community and cannot be easily dismissed. "She has an excellent reputation by and large," Block says. "People need to take her seriously. Her arguments are reasoned. She has had an excellent reputation and has certainly made a name for herself in this area before any of the anthrax attacks. She is by no means a crackpot or a kook, nor is she a conspiracy theorist."

FBI spokesman Paul Bresson refused to comment on Rosenberg's writings. "The anthrax investigation is still an active investigation," he said. "We are not in a position to comment with respect to potential suspects in the case or what specific investigative steps have been taken along the way."