Some Democratic senators are sabotaging plans for a 9/11 independent commission so that they can preen on TV. 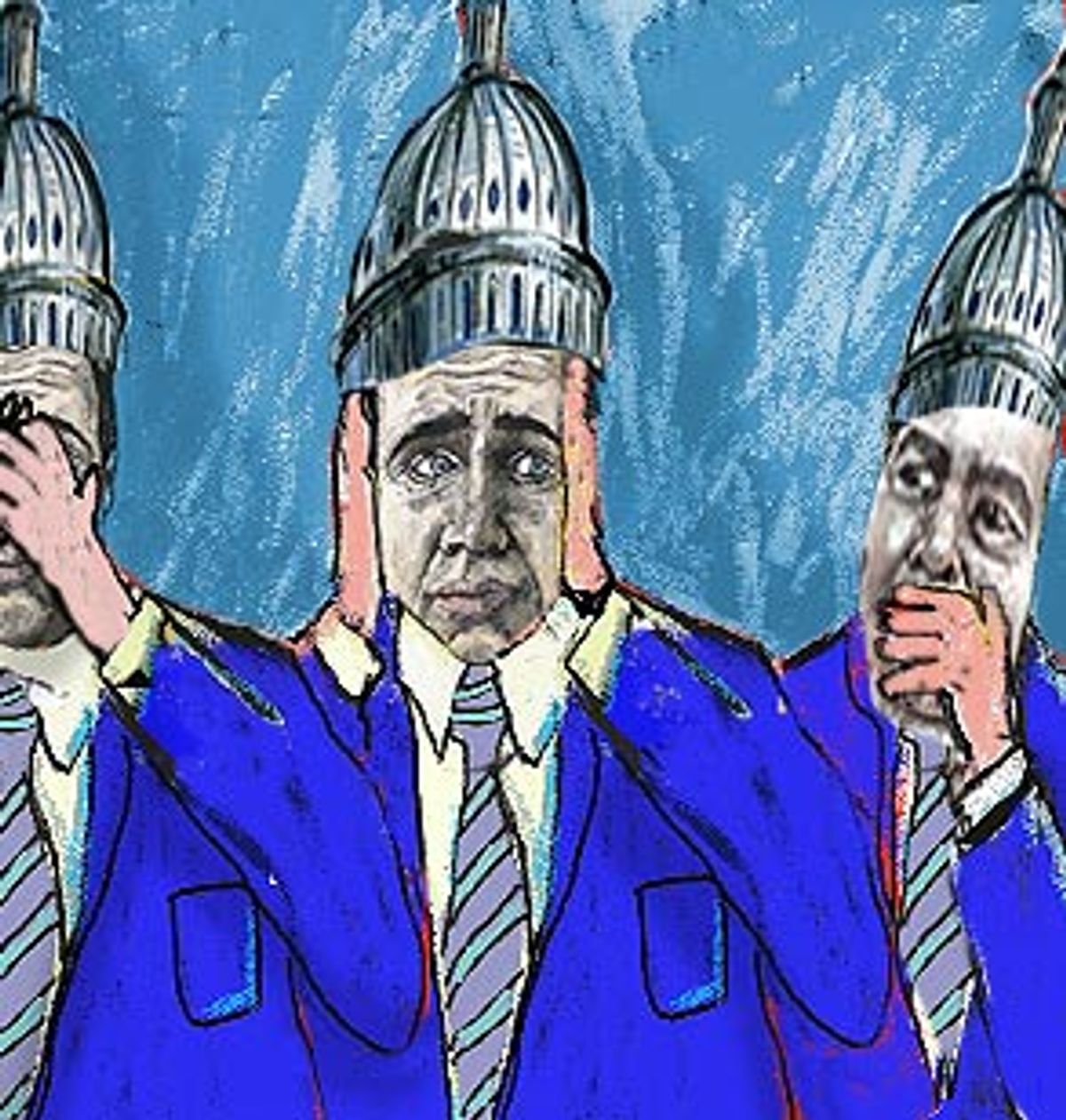 Within the past two weeks, Congress has quietly set aside legislation that would establish an independent commission to investigate the terrorist attack of Sept. 11, 2001. That important bill, already approved by the Senate Governmental Affairs Committee and supported by Senate Majority Leader Tom Daschle -- along with most of his fellow Democrats and a handful of prominent Republicans, notably including Arizona's John McCain -- is dead, at least for the moment.

The critical probe will thus remain under the purview of the special House-Senate Joint Committee on Intelligence, whose deliberations are being held almost entirely behind closed doors.

What apparently does matter is that certain members of Congress maintain control over the investigation -- and as a result, enjoy a vastly increased amount of face time in the national media.

That isn't the only motivation behind congressional resistance to an outside, nonpartisan investigation, of course. The Bush administration wants no part of such a probe, fearing public embarrassments even worse than it has already suffered. Both George W. Bush and Dick Cheney have warned portentously that an independent commission would hobble the war on terrorism, and settled only grudgingly for a congressional investigation. Their Republican allies in the House leadership have vowed to kill any legislation establishing an independent investigation.

But there was, until recently, a chance that the Senate would approve the independent commission bill sponsored by McCain and Sen. Joseph Lieberman, D-Conn. -- and bring public pressure on House Republicans to go along. Now that chance has passed, thanks to backroom opposition from Democrats on the Senate Intelligence Committee, according to a well-placed source in the Senate. Particularly opposed were Sens. Bob Graham of Florida, Evan Bayh of Indiana, Dianne Feinstein of California and John Edwards of North Carolina, Vanity Fair and the "Today" show.

Their angry protests in the party caucus have forced Daschle to back away from the independent commission bill he endorsed only a month ago. Knowing that he cannot depend on 50 votes, even with the support of principled Republicans like McCain and Iowa's Charles Grassley, the majority leader has lapsed into silence on the subject. He now plans to wield the independent commission as a threat in negotiations over intelligence reform with the White House and the Republicans.

A clue to how badly this stalemate serves the public was momentarily visible on May 19, when Feinstein and House Republican leader Dick Armey appeared together on CNN's "Late Edition." "We're in the middle of a war on terror. We need to be together. We don't need to get into some kind of open fire fight either between parties or between individuals," said the California Democrat, parroting the White House line against an independent commission. Besides, she added, an independent commission "wouldn't work."

Armey eagerly agreed, praising Feinstein's seriousness and patriotism. "It should be handled professionally, it should be handled carefully, and it should be handled quietly." Ah yes, very quietly -- just the way the Republicans handled accusations of Chinese espionage during the Clinton years. That Armey should prefer a coverup is no surprise; that Democrats would go along with him is a disgrace.

For Feinstein to claim that an independent commission "wouldn't work" is to suggest that the congressional committee is working well. But it has been plagued by leaks, poor cooperation from intelligence agencies, and staffing that worked so badly the director was abruptly fired. Graham is widely regarded in Washington as a well-meaning tool of the intelligence community, and there are few members who have sufficient experience, skills and stature for this demanding job. His Republican colleague Richard Shelby is believed to be pursuing a petty feud with CIA Director George Tenet. And those aren't the only reasons that the committee's work lacks weight.

It would be ridiculous to argue that such senators as Bayh or Edwards are more qualified to probe this massive intelligence fiasco than the veteran experts who served on the Hart-Rudman Commission. Yet Bayh has insisted that "the intelligence committees are the best place to handle this. They have a track record of handling discreet information in a confidential way. The expertise is there and I think that's the best place for the job to be done."

As for Edwards, always mindful of his presidential ambitions, the North Carolina freshman sensation has tried to straddle the issue. He told Katie Couric on "Today" recently, "I think there'll be substantial support for the possibility of an independent commission and that may be something that makes sense." He clearly wants the congressional investigation to take precedence, however, and he has indicated that no other panel ought to be appointed until his committee's report is completed. The painful truth is that Edwards knows little about this subject, but loves the attention that it brings him as a member of the joint committee.

This is not an ideological question, and shouldn't be a partisan issue. Politicians of both parties are as much a part of the problem as the agencies they failed to oversee. Who watches the watchdog? Not these toothless hounds and puppies. They ought to wrap up their effort as soon as possible and stop obstructing what the nation needs most: a wide-ranging, transparent, professional and unbiased investigation of the danger we now confront.