"More Songs About Buildings and Food"

It's 1978, and a band of Manhattan art-school geeks called Talking Heads teams with Brian Eno to produce the funkiest nervous-breakdown record ever made. 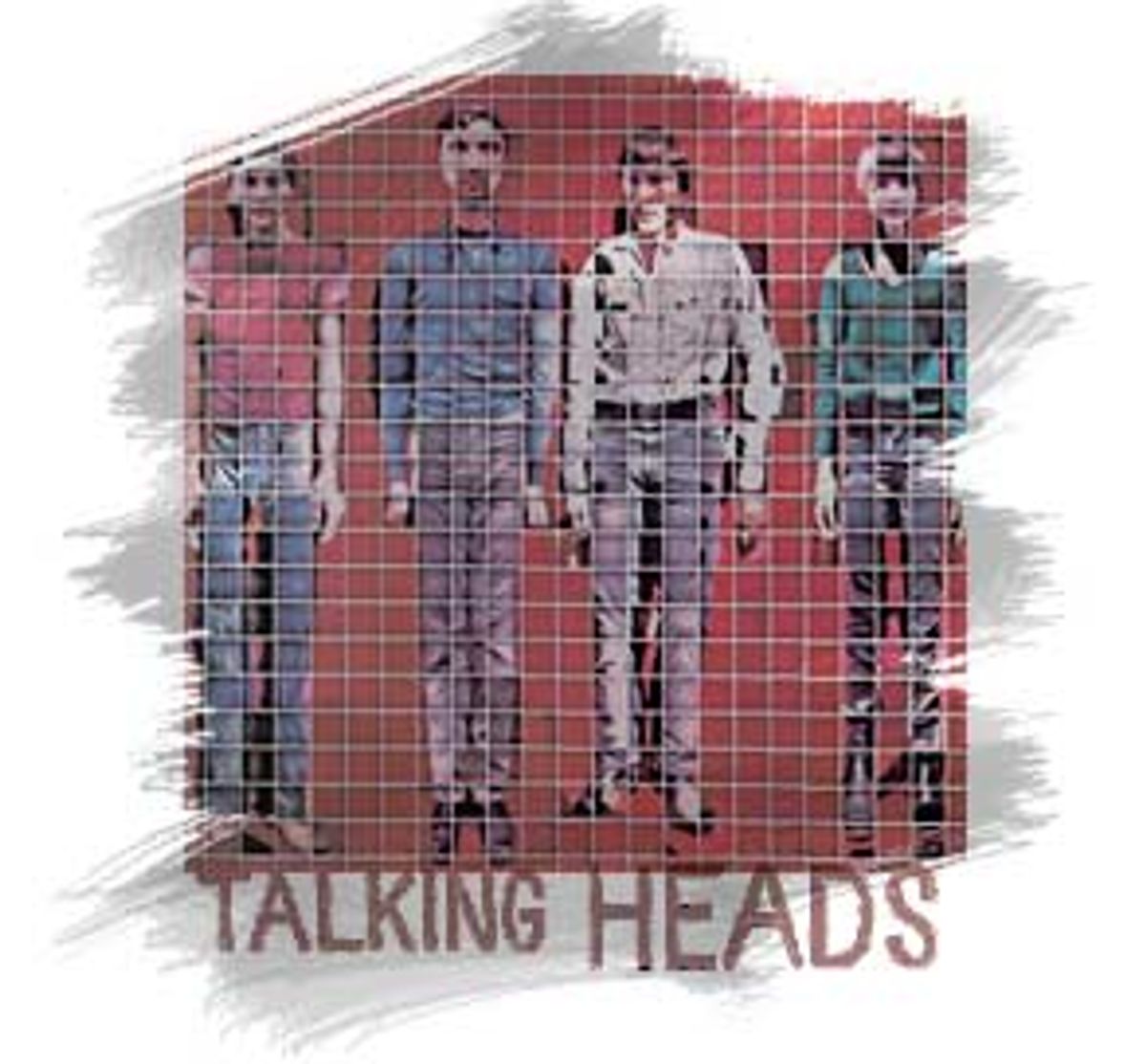 On July 14, 1978, Talking Heads released their second album, "More Songs About Buildings and Food," a backwards exorcism of frozen-brittle guitars, smeared textures and super-ecstatic vocals. The record brought forth an essential darkness and didn't try to extinguish it. These were songs about emotions that lurk, about the secret part of ourselves that knows people can see right through us on buses, planes and subways, all sung by a disjointed, ferocious, manic, shivering guy named David Byrne. It was a kind of State of the Union address, examining the nation's health from a dozen different angles, including the sky. Now, almost 25 years later, what could be more relevant than songs about buildings and food and love and rage and sorrow and hope and fear?

Today, VH1 specials document the Heads' part in the CBGB years, centered on the downtown Manhattan club where they accompanied the Ramones, Blondie and others in a New York minute that inaugurated American punk. But the Heads were never really punk. For one thing, they looked like their Izod alligators should be wearing them. They were art-school geeks less given to slam-dancing than Polaroid experiments.

Yet they belonged in some odd way. Having a front man who sang a tune called "Psycho Killer" and looked as though he might not be kidding probably helped. Having a music press that kept repeating that fact didn't hurt. Neither did songs which were much more ferocious live (as any bootleg from that period, or the unjustly out-of-print live album, "The Name of This Band Is Talking Heads," will reveal) than on their somewhat diluted first studio album, "Talking Heads '77." Byrne made anxiety sound like a street drug.

Despite its bubble-gum flavor, their freshman effort suggested what would come, a white funk that was driven and earnest enough to become a real thing all its own. It was already there in the steady pulse of "Psycho Killer," the sprinting "Who Is It?" Still, the assured but schizophrenic "'77" posed a question: At a time when Bic lighters illuminated encores without irony, would the skinny white kids in the preppy clothes follow the funk or go the way of the jingle-jangle?

"More Songs About Buildings and Food" answered the question: They would follow both roads into some weird, nameless country, and take us with them.

It begins with rhythm, Chris Frantz's martial drums and Tina Weymouth's thumping bass. Add chicken-scratch guitar by Byrne and sometime keyboardist Jerry Harrison. Together, they sound like the James Brown band having the world's funkiest nervous breakdown. That's the first song, the unbelievably rising "Thank You for Sending Me an Angel," in which Byrne calls out to a new love, "Oh, oh, baby you can walk/ You can talk just like me!" It's a happy start to an often dark record. The song keeps picking up, rising, climbing, soaring like a brand new boyfriend-girlfriend crush: "My favorite color is red, too!" And yet we also hear the first hint of something more sinister. "With a little practice, you can walk like/ Talk just like me."

Sex Ed is over and the kids skipped straight to Psychology 101. In "With Our Love," Byrne warns of love's unseemly side: "It's just a look, and it makes the boys quiver/ Yes, it's just the look, and now they remember/ Had they forgotten ... what this all means?" Cold water in the face, sheets of some strange sound rolling at us and what amounts to a mantra: "I won't look, I've got other things to do now/ I forgot what it was. I've got to get to work now." Frightened by love, the narrator shakes off infatuation for the always beckoning (and never quite explained) work project.

Love is an amazing fuel, but, like gasoline, it's dangerous if you leave it lying around. The rush of love is like another staple of that late-'70s scene, cocaine, exciting while it lasts, scary when it wears off and potentially deadly when it won't work and you need it most. Perhaps that's why even the slower numbers on "Buildings and Food" sound like a manic-depressive about to go full-blown Napoleon. If love is energy, you have to use it, or it uses you.

In "The Good Thing," Byrne spells out the lesson in detail, planning his day calendar with protractor and compass: "A straight line exists between me and the good things/ I have found the line and its direction is known to me/ Absolute trust keeps me going in the right direction/ Any intrusion is met with a heart full of the good thing." Talk about workaholics: This guy rolls up his sleeves before taking a shower.

Yet he's sincere to a fault. Byrne is often mistaken as ironic, when actually he says exactly what he means, opposites and absurdities included. He's like one of those weathermen who makes up goofy word combinations for mixed weather. If it's hard to tell what he means, that's because he says two things at the same time, and means both. As he told Troika's Julian Rubinstein: "There's this juxtaposition of all this stuff going on. It's not a hidden message, it's just what it is."

On the song "Artists Only," Byrne offers a different explanation: "All my pictures are confused. And now I'm going to take me to you."

The album's juxtapositions can make you laugh. In "Warning Sign," Byrne poses a funny/pathetic/scary seduction that sounds like Arnold Horshack copping "Love Boat" come-ons. "Take it easy, baby, take it easy/ It's a natural thing and you have to relax/ I've got money now, I've got money now/ C'mon baby, C'mon baby!" He makes his move like a sweaty question mark. You can imagine the target of his desire backing toward the door thinking, "Oh ... my ... God."

While all that's going on, the music sounds as though it's being sucked into a jet engine. It's one of many Brian Eno moments. The intrepid producer and electronic-music pioneer, in his first collaboration with the Heads, blows an otherworldly breeze, playing with time and space, everything zooming backwards and forwards, coming together and flying apart. The partnership between Byrne and Eno which began here would continue through the Heads album "Remain in Light" as well as the Byrne-Eno side project "My Life in the Bush of Ghosts," the music sinking deeper and deeper into pure, pseudo-tribal rhythm.

Some blamed Byrne's closeness to Eno on the increasing tensions between band members, but if the group dynamic was love-hate, so was the music. This was the band Eno was born to produce. Accidents don't get any happier. Everything was in question, nothing stable.

So the song "Girls Want to Be With the Girls" calls up images of high school dances, girls on one side, boys on the other, with hints of future gender tension. The song's title can be read innocently or not, but either way, these are no pillow-fighting nymphos. "Girls are getting into abstract analysis/ They want to make intuitive leap." It's another marching song, Weymouth's bass moonwalking through keyboards that rain like magic bells, driving straight into Byrne's fiercest testimony to work, "Found a Job."

Eno, who admired the Velvet Underground's use of every instrument in a rhythmic assault, must have loved this song. With relentless guitars, it mimics the hypnotic effect of good work, the way intense focus nails one so thoroughly to a job that everything else is forgotten.

It presents work as love therapy, two people saved not by religion or Valentine's Day cards, but shared task. Bored by television and each other, they start making up their own shows. "Judy's in the bedroom, inventing situations/ Bob is on the street today, scouting up locations/ They've enlisted all their family/ They've enlisted all their friends/ It helped saved their relationship, and made it work again." It's running music, churning, arms and legs flying, the constant rhythm spiraling like a drill press.

Once again, love as energy, propelling, launching. Music for a nation of fill-in-the-blank-aholics, for whom work addiction might be the only hope. If you can't exorcise your dark side, employ it.

"I'm Not in Love" takes the notion even further, positing a life minus romance. Could we mine the energy of love without wasting valuable resources on heartbreak and occasional felonious assault? Maybe it's not such an unreasonable desire, at least when love stops working. For a workaholic like Byrne, the inspirational spark of love is most important, not make-out sessions on the couch. "I'm Not in Love" takes the spark and leaves the love behind.

Now the centerpiece, Byrne's bizarre recasting of Al Green's "Take Me to the River," in which sex and love are baptism, lust and self-annihilation all at once. Try to really hear the song again; it's been stripped of threat by overplay but deep down there still bubbles a weird amalgamation. Find a tape of the "Saturday Night Live" performance and watch Byrne on guitar, the way the notes fall apart in his hands as he chops the chords into a love song swimming for life against a tide of fear and hunger. The song is chemical, molecules fusing, turning into something as new and dangerous as a love affair.

Finally, in "The Big Country," we board a plane and sail over everything, the whole country. "Places to park by the factories and buildings/ Restaurants and bars for later in the evening/ Then we come to the farmlands, and the undeveloped areas." But something is missing. The narrator longs for something real. "I'm tired of looking out the windows of the airplane/ I'm tired of traveling. I want to be somewhere/ It's not even worth talking about those people down there." Finally it all devolves into a memorable chorus of nonsense. "Goo Goo Ga Ga Ga/ Goo Goo Ga Ga Ga."

Twenty-five years later, who doesn't board planes with mixed emotions, longing to simply be somewhere as the world comes apart, love stretched by anxieties real and imagined? The greatness of "More Songs About Buildings and Food" lies in the way it followed the almost invisible undercurrents of its time to their natural and unnatural conclusions. The self-help theme that runs through the record, the tips and strategies, sound no stranger today than any of a hundred modern remedies.

In 1978, the Heads were still a few years shy of some of their biggest hits, and hadn't yet wandered onto the African and Brazilian paths that would drive the groove deeper and sometimes brighter. Nor had they released the solo efforts that would hint at the future careers of the always eclectic Byrne, the brooding Harrison, the sunnier Frantz and Weymouth. No, the clouds were still gathering on "More Songs." You knew the lightning was coming. Blue skies would have to wait.

They were still en route over troubled lands. There was no easy way around the questions, no safe place to land. That's why the hope of this music lies in its very darkness: Sometimes learning there is no cure is the best therapy. If you can't exorcise the darkness, work it, and keep that love ignition going, going, going.

Paul A. Toth is a fiction writer and journalist living in Michigan.

MORE FROM Paul A. Toth