The fire this time

A wall of flame burns through Arizona, and with it, a storm of accusations. 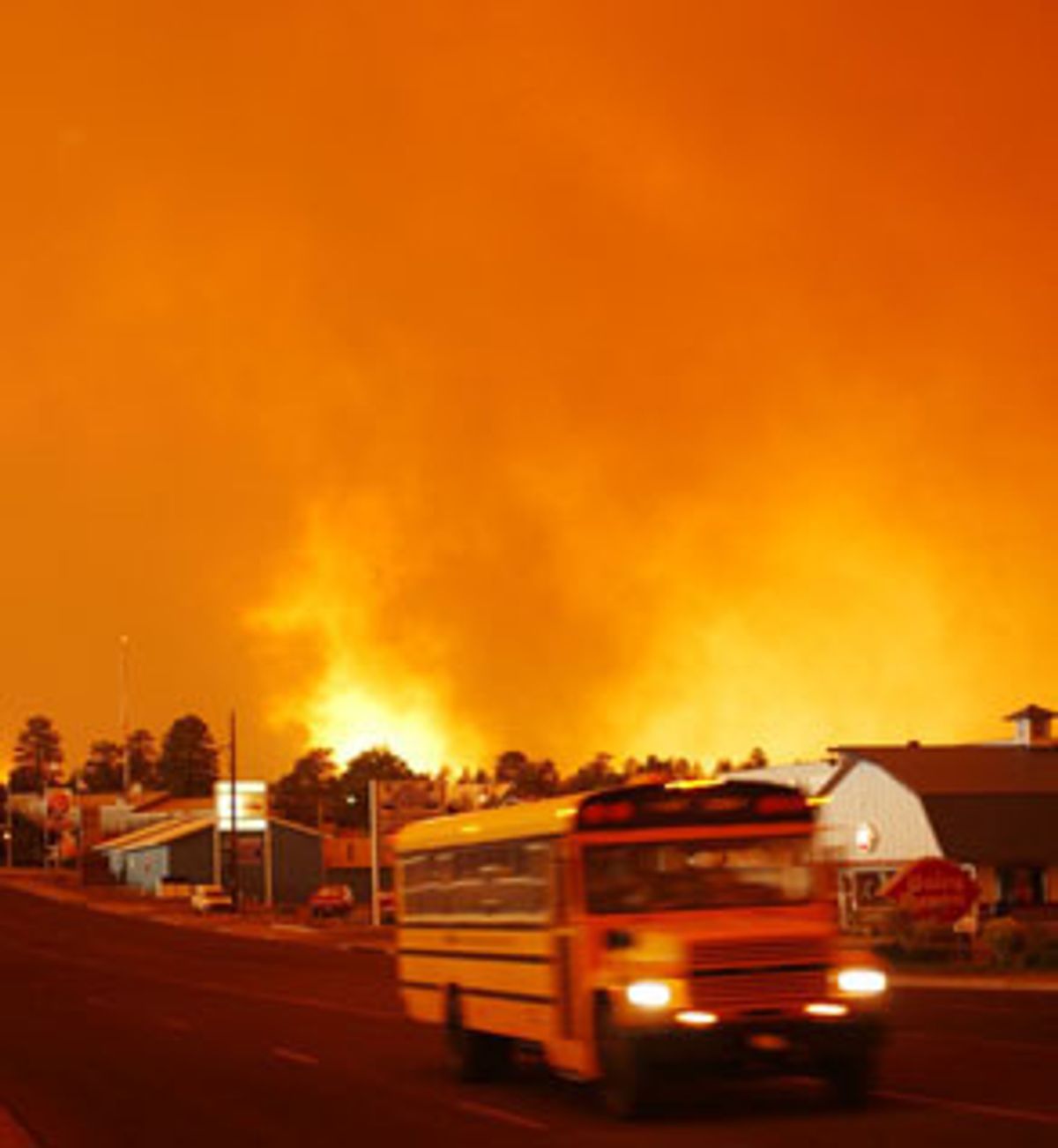 A couple of weeks ago, in the small New Mexico town of Carrizozo, I happened on a crew of young Mescalero Apache firemen resting under the shade of a cottonwood tree. I approached to thank them for their work in putting out a huge fire that had just burned out more than 30,000 acres in the mountains above my home in Tucson, Ariz. "That fire got hairy," one of them shyly said. "But fire's not so bad."

"Yeah," said another. "At least it gives us something to do."

So it does. Just a week later, the Apache firemen were back in Arizona, along with hundreds of other firefighters from all over the West, battling what has turned out to be the largest blaze in the state's history by an order of magnitude. Eleven days old at this writing, the combined Chediski-Rodeo fire (which began life as two separate conflagrations some 40 miles apart) has burned more than 400,000 acres, or 640 square miles, of the heavily forested country along east-central Arizona's Mogollon Rim, a massive escarpment that rises from the desert floor in a geological tumult that is among the roughest landscapes on earth. That fire accounts for nearly a quarter of the land area that has burned thus far in what may well become the worst fire year in the history of the American West.

The sheer scale of the fire has been astonishing even to longtime observers of such phenomena, with 50-foot-tall flames dancing over an area in which most of metropolitan Cleveland or Baltimore would fit, searing the ground to sterility, consuming hundreds of homes, displacing thousands of people.

Less astonishing has been the quickness of Arizona civic boosters and Republican politicians, Gov. Jane Hull and U.S. Sen. Jon Kyl foremost among them, to blame the fire on "radical environmentalists" who have opposed efforts to make the state's forests more fireproof -- all too often, it seems, by paving them over. Arizona environmentalists have indeed long agitated against forest-management practices that scrape away combustible undergrowth and thereby convert natural woodlands into something resembling tree farms, destroying critical habitat for a broad range of species in the bargain. Those environmentalists have responded to the latest charges in kind by condemning the long-standing reluctance of state and federal foresters to allow forests to burn when fire does strike. The result of this policy of fire suppression, they charge, has been to allow forests to accumulate such a tangle of undergrowth that when fires do break out, they do so in catastrophic dimension, as they did, memorably, in Yellowstone National Park in 1988.

In the flurry of accusation and counteraccusation, both sides are correct. And both are wrong. Leaving a forest alone, especially a dry forest of the kind in which the mountain West abounds, increases its flammability. But so, too, does logging that forest, which is the real business of those state and federal foresters. The government's long practice of "multiple use"means, to all extents and purposes, the extraction of multiple commodities such as timber, minerals and other resources from land held in the public domain.

Fire likes nothing better than the "slash," or debris, left after a clear-cutting operation, a field of shavings that burns with bright ferocity at the mere hint of a spark. Great swaths of this slash dot the Mogollon Rim.

Forest-management policies have served the timber industry well, keeping fire out of productive groves and permitting the wholesale clearance of great tracts of land. These practices have been standard since the days of founding U.S. Forest Service director Gifford Pinchot, the author of the multiple-use doctrine, who took office a century ago. They presumably enjoy the support of President George W. Bush, who said, on touring the Chediski-Rodeo fire line a week into the burn, "Listen, we've got a lot of work to do to make sure the Forest Service has got wise forest policy -- to make sure to maintain the forests so that they're healthy and viable, and not become kindling boxes." This "wise policy" is likely to be more of the same: scraping scrub and snags from the forest floor so that only harvestable trees remain, creating clearings with bulldozers and drag chains, suppressing fires wherever they threaten profitable stands.

This industrial approach to tree management, which only raises the risk of major fires, has not served the forests well. But fire is the least of a tree's worries, and the dry forests of the West are doomed to burn under any circumstances. As they should, for fire is a reality of the natural world, an integral part of the natural order. Heartless though it may seem to a homeowner whose mountaintop getaway has just burned to the ground, the young Apache firefighter was right: Fire is not a bad thing. It is essential to the health of a forest, something akin to a snake's shedding its skin. It is in recognition of this fact that progressive foresters advocate a program of controlled burning, so that when a forest becomes too choked with brushy undergrowth, portions are cleared through fire, that most natural and ultimately least intrusive of agents. Where the Forest Service has put this approach into practice -- notably, again, in Yellowstone National Park -- it has proved to be highly effective.

The truly surprising thing about the fire now burning in the Arizona highlands is that it did not come much sooner. For, if there is a single underlying cause for that fire, it is this: Fire follows humans, goes wherever we go. When the Rodeo and Chediski fires first sparked, separately and distantly, there was not a cloud, not a flash of lightning, in the sky. This strongly suggests that the origin of those conflagrations lies in the usual cause for the natural world's woes: human stupidity, or, more generously, human carelessness, or even the mere presence of humans. A thoughtlessly discarded cigarette, a dragging muffler shooting sparks off asphalt, a campfire gone out of control: any one of those things might have touched off the fires. All that presumes accident, of course, and sets aside a more likely if unsettling possibility: that the fires were deliberately set, as was apparently the case in the concurrent Hayman fire southwest of Denver.

More and more humans are coming to the fast-developing Mogollon Rim, building log condominiums, shopping centers and luxury homes atop strata of bone-dry ponderosa pine needles, among arid forests that see only a couple dozen inches of rain in a year. Some of those humans smoke. Some of them drive. Some of them build campfires. Some of them are easily distracted.

And as more humans come, more fires will come, a consequence of the awful Promethean power we wield. Those fires are inevitable. For even if many find it surprising, this law of nature obtains: Should you build your home in a forest, it will someday burn.

Fire is to forest as hurricane is to beach, as tornado is to prairie, as drought is to desert. This is a reality of the natural world. But modern Americans, it seems, do not like to hear the word "no," do not like to contemplate worst-case scenarios at the expense of cherished dreams, do not like to admit the possibility that nature cannot be controlled. It is much easier to blame what is an inescapable consequence of progress on supposed enemies of progress than it is to do the hard work of being attentive, of taking preventive measures, of building out of harm's way rather than wherever the weather is nice and the prospect pleasing. It is much easier to throw blame than it is to develop forest-management policies that take the ways of the forest into account -- and to admit the possibility, on the other side, that forests can be logged sustainably without throwing off the fabled balance of nature.

All that work is necessary if we are to continue to make our home in the woods. At least it gives us something to do.

Gregory McNamee is the author of Blue Mountains Far Away (Lyons Press, 2000), Gila: The Life and Death of an American River (Random House, 1994), and other books. He lives in Tucson.