With tiny little jokes and nary an original idea, this sappy ethnic sleeper proves that not only blockbusters pollute the summer movie pool. 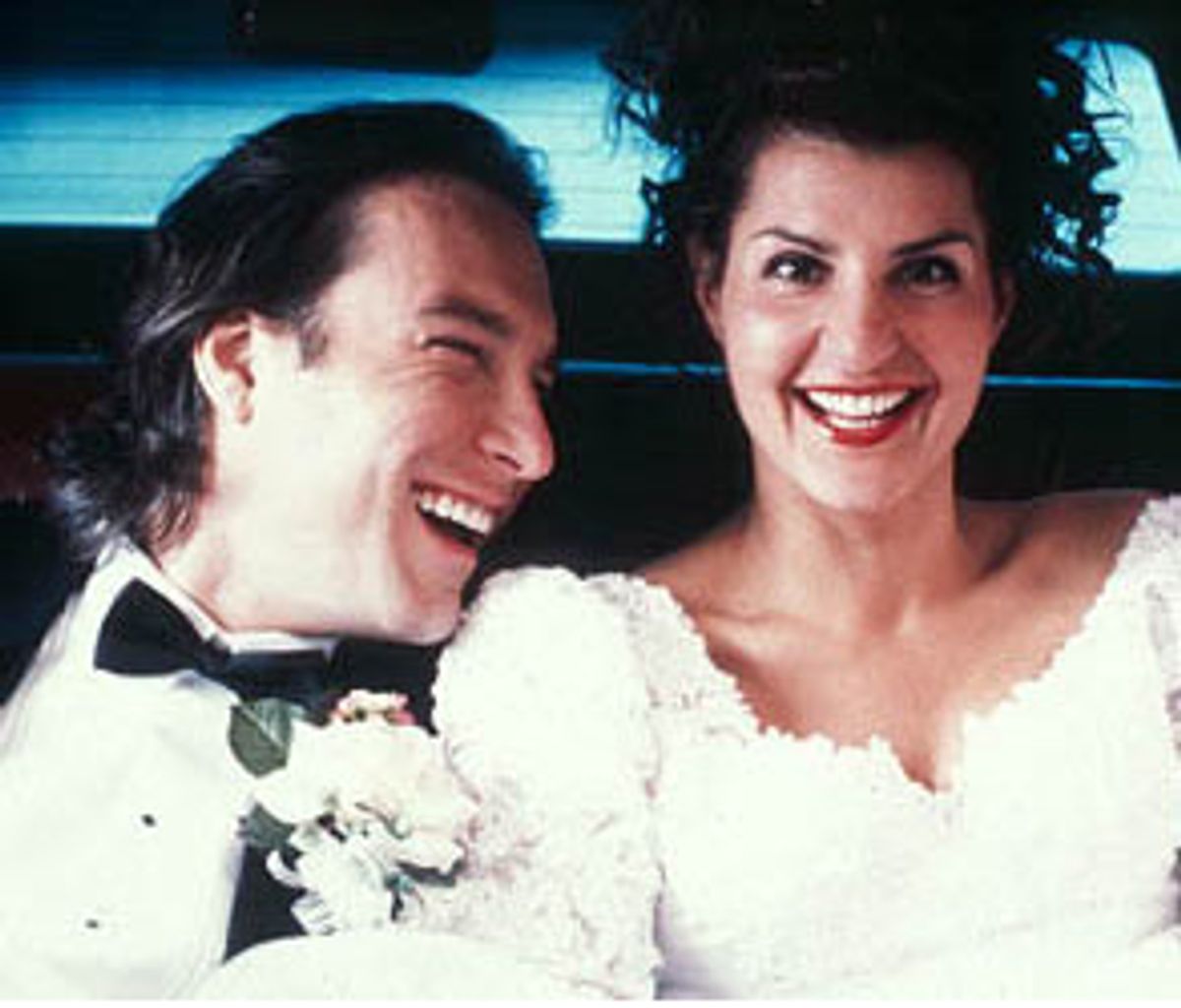 As Tolstoy observed, all sappy ethnic family comedies are the same. None is sappy in its own way.

Substitute "Jewish" or "Italian" or "Latino" (hell, "Micronesian" for all I know) for "Greek" in the title "My Big Fat Greek Wedding" and you'd have the same movie. Maybe with gefilte fish or meatballs instead of moussaka, but the same movie.

"My Big Fat Greek Wedding" is one of those movies that exemplifies what Insepctor Clouseau meant by the line, "It's all a part of life's rich pageant." Here are the laughter and irritations, the tears and, yes, the love of noisy, ethnic family life. Only without any of the distinction or sense of real observation that you get in the best family comedies. A few entries in the genre have escaped this faux heartwarming bushwah: "Moonstruck," which had a genuine spirit of looniness, and "Four Weddings and a Funeral," which had a pleasing sheen of professionalism.

"My Big Fat Greek Wedding" essentially tells us that Greeks are no different from Jews or Italians, just as nosy and pushy about their children's love lives, just as maddening when they intend to be well-meaning. The movie is like going to a family reunion and finding a smoochy horde descending on you, all wearing T-shirts saying "It's a Mediterranean Thing."

And I've no doubt that there are cross-cultural irritations in large families. The trouble here is that none of the characters have a spark of individual life. They're all just fulfilling their generic functions. There's the puffed-up father (Michael Constantine) who thinks he's the boss of the family; the big-bosomed mother (Lainie Kazan) who knows she is; the silent, cantankerous grandmother dressed in that black shroud that signifies "Old World"; the wacky relatives (chief among them Andrea Martin as a google-eyed aunt). And there's the dutiful, ugly duckling daughter (Nia Vardalos, who wrote the script), who has supposedly gotten too old (30) to find a husband; and the good-looking catch (John Corbett) who sees the beauty she keeps hidden underneath. Of course, he's not Greek, and the interaction of his boisterous in-laws-to-be and his pinched WASP parents are meant to be a chief source of hilarity.

If seeing Episcopalians slam down ouzo is your idea of a great evening out, then by all means run to the box office. The only genuine comic moments are those provided by that mad genius Andrea Martin who, in between the shtick she's saddled with, gets one scene where she turns a tale of having a lump removed from her neck into something approaching dada.

Anyone who's ever planned a wedding knows that, along with moving, it's one of the hells that life offers us. You inevitably end up squabbling with your mate, trying to placate the unreasonable requests and quirks of a dozen relatives who can't quite get it into their heads that this isn't their day, feeling as if your pocket is being picked by caterers, florists, photographers, etc., who tell you you don't want to skimp on flowers/pictures/drinks/hors d'oeuvres/a pasta station for the damn vegetarians. The miracle of wedding days is that all this torture turns out to actually be worth it. (At a wedding of some friends a few weeks ago, the bride, a buddy, asked me at the reception, "How did all that craziness end up being worth it?") My wedding really was the happiest day of my life. Though I would never discourage anyone who wanted to cut to the chase and elope.

That pretty much universal experience of anyone who's ever been married, or stood on the sidelines watching loved ones plan a wedding, may have something to do with why "My Big Fat Greek Wedding" has turned into something of a crossover indie hit. (It's finally opening across the country after playing in eight cities since April.) But it's supremely depressing to sit in an audience laughing uproariously at sitcom gags and shtick familiar from years of second-rate stand-up comedy, and greeting it as if were refreshing and new. I understand that there are moviegoers who, especially in the summer months, feel that there's nothing for them amid the blockbusters, that there are people who'd rather see this than "Attack of the Clones." (I wouldn't blame anyone who'd rather watch film leader than "Attack of the Clones.") But does taking refuge from special-effects extravaganzas and incoherent storytelling mean this? (Couldn't they have rented "Holiday"?)

There's another problem. Vardalos has conceived the movie as Toula's declaration of independence. But it's damn hard to feel sympathy for someone who's 30 years old and still kowtowing to her father's vision of her as a baby machine. When she meekly asks him whether it would be all right for her to take some computer courses at the local college and he flies into a "Why you want to leave me?" hissy fit, I wished she'd just waited until he was asleep and smothered the old bastard with a pillow (Constantine gives a truly insufferable performance). I can't be the only one. (Even Cher's character, in "Moonstruck," who lived at home like Toula, knew just how to handle her bossy pop.) It doesn't help that John Corbett is so intent on pleasing his bride-to-be's family that he passively goes along with everything from being baptized in the Greek Orthodox Church to seating arrangements. The appeal of John Corbett (best known as Aidan on "Sex and the City") is his galoot likability. He turns passivity into hunkiness. But he's a decoration here. I kept waiting for him to use his nice-guy persona to outwit his interfering in-laws. No such luck.

There's no way of knowing what scenes were left on the cutting-room floor, but Vardalos' screenplay feels awfully lazy. The lovers have barely said hi when the film cuts to them sitting laughing together on the floor like soul mates. You keep feeling that things have been skipped to keep the plot moving.

And, predictably, in the end, everyone accepts everyone else. Right. One of the pleasures of movies or books is seeing characters show sides of themselves that you hadn't thought them capable of. But you've got to give some hint that they are capable of rising to the occasion, and I didn't believe it for a second when the father gives a welcoming, loving toast at the wedding. (Having been to a funeral and a wedding in the last month, I saw people living down to the occasion more than once.) The movie is meant to be about how Toula reconciles her love for her family and their traditions with her wish to lead her own life. But the sound of wedding bells is drowned out by the sound of the ball and chain she still drags around.