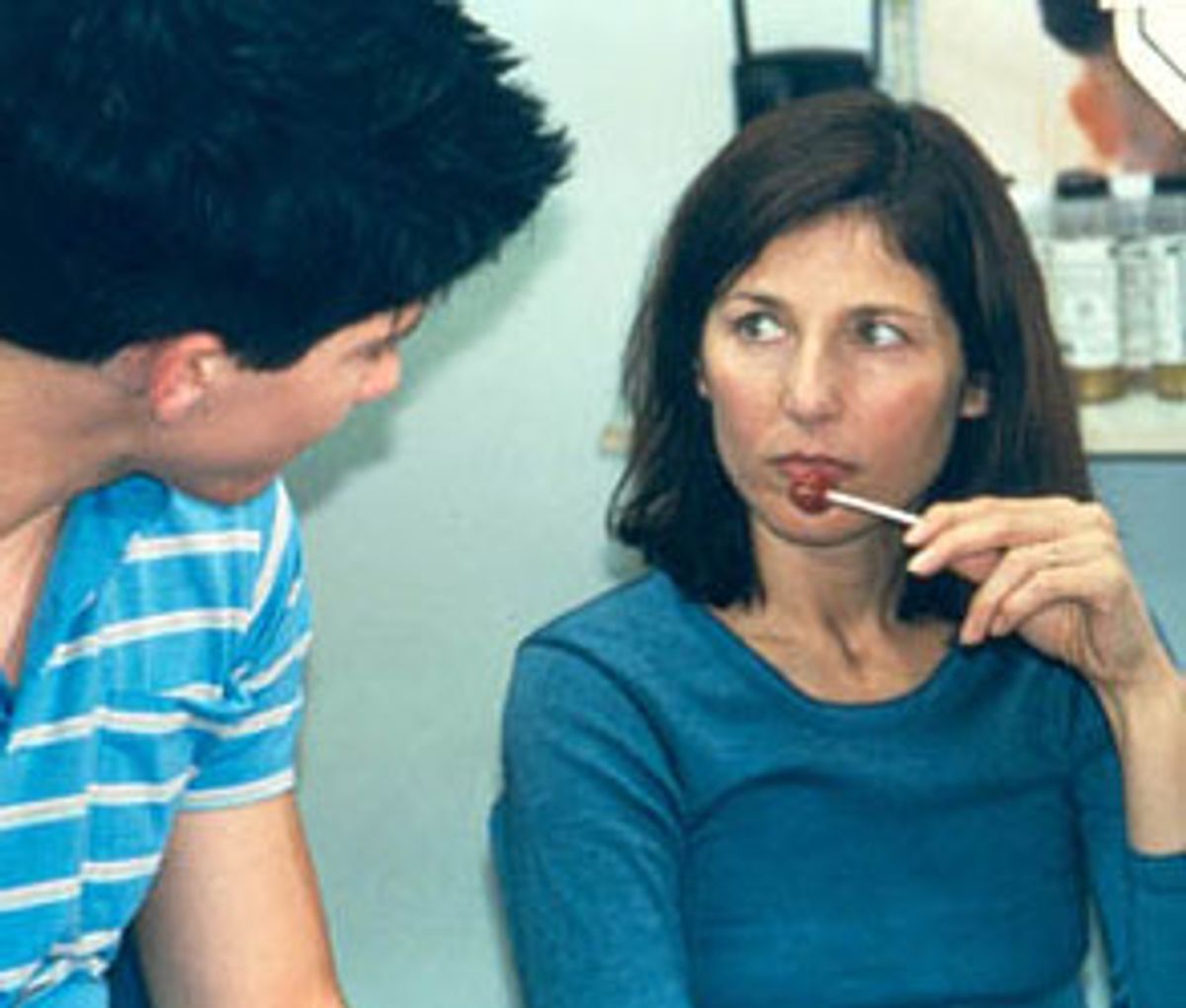 For all the movies being made today, it's almost shocking how few of them populate the gulf between flashy, huge-budget Hollywood pictures and small, well-intentioned but inept indies, the latter often shot on digital video that manages to add a dishwater haze to even the loveliest of images. A small, well-made movie is always a wonderful thing, which is probably why sympathetic filmgoers make excuses for all those smaller movies that are not so well-made: "The big studios won't give young directors jobs to help them learn their craft -- no wonder they don't know what they're doing." Or, "This may not look good, but it's better than the heartless professionalism of most big Hollywood films." Or, "The director just didn't have any money to work with."

The problem is that most of those arguments boil down to how much money a filmmaker had or didn't have, rather than what he or she has upstairs. Good characters, and a good story, are cheap. And in that respect, Nicole Holofcener's second picture, "Lovely & Amazing" (her first was the 1997 "Walking & Talking"), is a small movie that doesn't feel small. It's mostly because Holofcener, who also wrote the script, clearly made the effort not just to develop her characters but also to listen to them and let them tell her where the story should go. It's a movie made with care and attention to emotional detail, and these days that can make a film seem priceless.

Beyond that, there's a light, casual feel to "Lovely & Amazing" that's invaluable in this weird era of moviemaking, a time when we're inundated with slick mainstream products but also get our share of ploddingly sincere but carelessly made indies. "Lovely & Amazing" is about the way people in families relate to one another, about the way women feel about their looks not just as they age but at any age, about racial differences and presuppositions that no one ever wants to talk about. Yet the picture's themes never ring off the screen with that ungodly feedback-like sound. Instead, they swing back at you after the movie's over, resounding with a soft ping.

Michelle Marks (Catherine Keener) is a jobless artist: She makes labor-intensive, hand-printed wrapping paper and tiny, elfin chairs that she tries, halfheartedly and unsuccessfully, to sell to local shops. Michelle, who's nearing 40, is vaguely dissatisfied with her marriage, although she loves her young daughter very much. And while she generally means well, she's continually guilty of saying the wrong thing or at least the thoughtless thing. Self-absorbed, oversensitive and smolderingly insecure, she alienates people even as she's trying to draw them closer: She announces more than once, to people who couldn't care less, how natural childbirth was the greatest thing she ever did, unaware that she's coming off as the mommy equivalent of a businessguy who brags about his expensive car.

Michelle's younger sister, Elizabeth (Emily Mortimer), is an actress who doesn't get many roles and who also has a predilection for stray dogs, taking in every one she finds. Fragile but not unhealthy-looking, Elizabeth is reminded every day that she's in a business that requires her body to be "perfect." It doesn't help that she has a boyfriend (James LeGros, in a small, nasty, nicely sculpted role) who keeps reminding her of everything that's wrong with her, particularly her flabby upper arms (which, naturally, are barely jiggly at all).

Both Michelle and Elizabeth are at first distracted and then alarmed when their mother, Jane (Brenda Blethyn), goes into the hospital for a supposedly simple liposuction procedure that goes awry. Chiefly, they have to make room in their routines for the care of their 8-year-old sister Annie (Raven Goodwin, in a wonderful, blessedly uncute performance), whom Jane adopted.

Annie is African-American; she is also vaguely pudgy. She walks and talks with more self-assurance than either of her full-grown sisters (or, for that matter, her mother), although it's clear that she's beginning to have her own doubts about who she is and how she's perceived by the people around her. It doesn't help that Lorraine, a volunteer from the Big Sisters program (played with the perfect amount of self-righteous crispness by Aunjanue Ellis, who was recently seen in "Undercover Brother"), announces to her, in no uncertain terms, that she has it tougher than anyone else in her family simply because she is black.

The whole question of how women feel about their faces and bodies has been done to death in magazines and books to the point where women -- let alone men -- are sick of it. But it's an undertone in "Lovely & Amazing," not a loud, banging gong. Each woman in the family (including the youngest one, Annie) deals with her insecurities in her own particular way, just as almost every woman (and, I'd argue, just about every man) deals with them in real life. The movie doesn't pass judgment on what's healthy or appropriate to want for yourself. Instead it merely points out that things that seem self-evident to us aren't always so obvious to others.

When Annie visits her mother in the hospital, her hair newly straightened by Lorraine (Annie had claimed, falsely, that her mother had said it was OK), Jane nearly weeps. "I loved your hair," she says, with so much dismayed conviction that you understand it never occurred to her that Annie's hair was in any way difficult in that "black" way.

"Lovely & Amazing" isn't a particularly well-shaped movie, but its looseness serves the story instead of unraveling it. The story moves along in discrete, episodic segments; each one focuses for just the right amount of time on one character or set of characters before it moves on.

Holofcener has actually given her actors roles to play, and they all respond gamely. Blethyn, who can be marvelously in tune (as in Mike Leigh's "Secrets and Lies") or assaultive and shrill (as in "Little Voice"), hits it just right here. She has just a touch of that vague, desperate silliness you sometimes see in older women who have suddenly grown insecure about themselves, but not so much that she ever loses our sympathy.

Mortimer's performance is even more delicately balanced: She has an astonishing scene where she stands completely naked before a new lover, a thimble-deep, snobbish actor named Kevin (Dermot Mulroney), and begs him to assess her body as truthfully (the subtext being "negatively") as he can. It's a brave scene, and the sort that's very difficult for an actor to pull off. Mortimer stands in full-frontal nakedness before the camera (and us) doing nothing but listening. The scene is wonderful because of the offhand way Mulroney plays it -- shallow as he is, he likes Elizabeth's body and can't help turning her perceived flaws into attributes -- but even more so because of the subtle flashes of expression that cross Elizabeth's face as she listens to Kevin's critique. She shows shyness, anxiety, dismay and relief not just with her eyes but with the set of her jaw, or the gentle shifting of her collarbones.

And Keener, who has made oblique, amusingly unreadable characters something of a trademark, plays Michelle so sympathetically that your heart goes out to her even as you want to strangle her. We get a strong sense of her character in the first few minutes of the movie. Shopping her tiny chairs to a local shop, she announces brightly to the vaguely snobby women behind the counter, "Don't you wish you were small enough to sit in them?" They respond with blank stares, clearly unable to tune in to the frequency of Michelle's universe, and we feel instantly protective of her.

No sooner has Michelle earned that protectiveness, though, than she attempts to dash it to pieces: We see her lavishing sunscreen on her own little girl, while she tells Annie that she doesn't need any because her skin is so dark that it won't burn. She repeatedly makes her own troubles the center of the family's attention. But Keener never loses us: Annoying as Michelle is, we still hang on to our faith that she's basically likable.

Out of desperation, she takes a job at a photo shop, where her co-worker, a sullen but sweet 17-year-old (played with go-for-broke weirdo passion by Jake Gyllenhaal of "Donnie Darko") takes a romantic interest in her. When he announces his feelings, she responds incredulously with her list of objections: "I'm married. I'm old." She's right about both things, but oddly wrong as well, and her raw inability to hide her pleasure at being loved in this new and strange (and fleeting) way makes you warm even more to her character.

"Lovely & Amazing," like so many other small-budget pictures these days, was shot on digital video, and although you wouldn't mistake it for film, Holofcener and cinematographer Harlan Bosmajian at least figured out how to unscrew the dishwater lens. The movie is carefully lit and shot, and beyond that, the characters give you something to watch -- they're acting in a real film, even if the film is on tape.

Everyone who's serious about movies -- from filmmakers to actors to critics to loyal moviegoers -- has something to say about the advantages (low cost) and disadvantages (hideous look) of DV. But in the end, it's what you put on tape, and how you put it there, that really matter, and "Lovely & Amazing" is proof of that. Film is expensive; digital video is cheaper. But a finely tuned sensibility like Nicole Holofcener's is more important than either, and it can't be bought at any price.