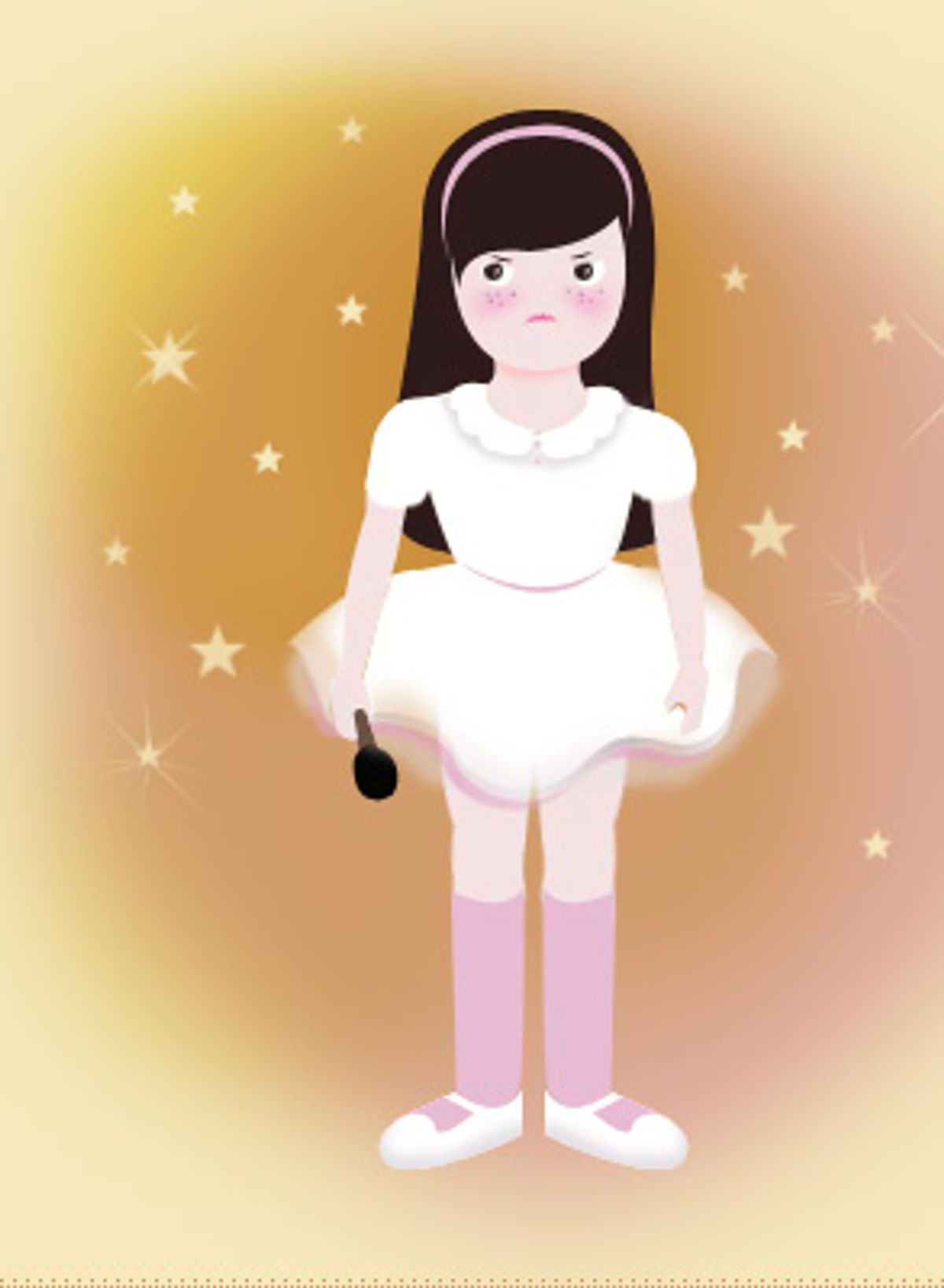 How many top celebs would you say there are in the world today? About a hundred? Maybe 110?

This spring, Scholastic Book Clubs, the big book-peddling outfit that uses elementary school teachers much the way Avon uses ladies, introduced the "People Almanac 2002" to the sound-it-out crowd. "You go, girl!" the copywriters at Scholastic urged budding scholars, empowering them to order the updated compendium. Why such a lavish outlay of marketing savvy? Because this year the almanac's "People Register" has been upgraded, and it's got more names than ever!

Not even close. Children who purchase the ultimate source for the scoop on pop culture -- from the magazine that treats hot stars much the way a poodle treats an old thong it's dug up from under a couch cushion (getting into a devotional position on top of the thing and then avidly licking its little crotch) -- get the full lowdown on over 600 top celebs.

That is a town. Two of some towns. Who can all these people possibly be? Check it out for yourself -- here are six of them now.

Celeb 277: Nancy Entwhistle. A true Hollywood Cinderella story, Nancy was pulled out of the audience at a taping of "Whose Line Is It Anyway?" and made to sit on a stool while the zany improvisateurs performed charades at her. As showbiz legend has it, Colin (Celeb 95) was acting out Matthew Perry (Celeb 408). Nancy shouted, "Jim Belushi!" (Celeb 572). And the rest, as they say, is a People cover story [May 11, 2001].

Matt and Jim have promised Nancy a juicy role in the project they're developing. She hopes to play the daughter of the lady surgeon who separates the boys in order to marry one of them. Which one? Nancy says she couldn't tell us even if she knew! The Full Lowdown: Nance had never even heard of "Whose Line?" She got dragged to the studio by a desperate friend with an embarrassing mother. The Scoop: "Hollywood parties are a real eye-opener. So many of the celebs you thought were dead aren't!" Tell it, Girlfriend!

Celeb 296: Eveline Parker. Willow dining room furniture. Hand-woven lamp wicks. Heritage perennials. Third grade. Where does Evie find the time? Shove over Mary-Kate (Celeb 42) -- Evie's new line of gingham pajamas are pret-a-party! And she can whip up a dozen pairs on a school night, no sweat! Stop hogging the friendship quilt, Ashley (Celeb 123) -- let Evie show you how to make your own! A TV show? A magazine? Eventually a media empire, a deeply scarred ex-husband, and a signature fragrance? What does Evie think of all the buzz? She's not fazed. She keeps bees!

The full lowdown: Evie says she's over her desperate crush on Mark Wahlberg (Celeb 336), and she didn't send any crazy fan letters. "How could I? I wasn't allowed to touch scissors until I was four!" The scoop: Evie makes her own blackstrap molasses. "It's simple!" Loves: fresh sassafras. Hates: picking cooties out of a batch of sun-dried prunes.

Celeb 376: Sam Pinkersby. Why is it every time we see a photo of Princess Eugenie lately (Celeb 21), we can't take our eyes off the dreamy lad carrying her knapsack, or fetching her croquet ball, or riding behind her in the golf cart or in front of her on the lawnmower, or grooming her horse, or standing in the background with something like a scoop and one of Grandma's Welsh corgis or else a quoit and a bag of fish and chips? Britain's newest inductee into the House of Celebs sure is a scene-stealer -- hope he stays out of dark tunnels!

The Full Lowdown I: Despite his princely good looks, Sam's not Eugenie's illegitimate half-brother or cousin. He's a palace lackey. So how did this dashing commoner get to be so tight with a princess? The Full Lowdown II: "Eugie takes after her dad's side (Celeb 71), at least back to Queen Victoria (Celeb 93). She likes mucking about."

Does the heartthrob have a message for his fans in America? Any word on when he might come over for an invasion? The Scoop: "I'm in America all the time, actually. Eugie and Trix (Celeb 20) go back and forth a lot, and I go along. Me dad's a chimney sweep up in Birmingham, and me mum's in advertising in New York, so it works out brilliantly. I think American girls are smashing." Chivalry. Swoons!

Celeb 385: Chelsea Amerongan. The spiritual 9-year-old's breakout poem, "Children's Eyes Raised in Praise," touched the Dark and Shriveled Soul of Chicken Soup readers around the globe. Now she's put the inspirational lyric to an uplifting melody and to pictures, with help from watercolorist Mom. The track-list media titans are clashing over? Take a sneak peak: Chelsea's recitation of "CERiP" at the Orange County Spoken Arts Festival, the haunted Appalachian singer-songwriter arrangement, the caught-in-a-trance remix, and what Dad calls a "gym class grind" for the first single. (What's even cooler? Dad's also a videographer!)

The Full Lowdown: Chelsea on fame, tradition and values (and what sounds like the scraps and bones of a powerful new poem): "I believe that in many ways, each generation has its Janis Joplin (Celeb 390) or its Kurt Cobain (Celeb 391), and it is our responsibility as artists to learn from the mistakes of the less fortunate, because it is not their fault if they did not have good role models, and keep their spirits alive in our music, for without these burned-out trail-blazers, we would not be able to follow their paths." The Scoop: "I actually saw JonBenet (Celeb 2) at a party at Carole King's place (Celeb 599). She just ducked in and ducked out, and she's changed her hair, but Gene Simmons (Celeb 619) and Richard Carpenter (half of Celeb 502) both swore it was her. Come to think of it, she is really our Garbo (Celeb 107) more than our Joplin."

Celeb 460: Kolidia Swanson. K-Lid made the final cut for "Big Brother 2" and was all moved in to the party house and ready to play serious mind games when a camera in the hot tub revealed ... she's 11! But plucky Kolivia hasn't let a scandalous ejection abort her rocket-launch to stardom. After playing ex-maid-slash-millionaire Aunt Mamie Johnson, age 8, in four sweeps weeks of scorching flashbacks on "The Young and the Restless," Kolidia got frisky with her stuffed toy collection for a revealing "Future Teen" profile in Teen People. Next, you saw her help Meredith Vieira (Celeb 56) teach the other ladies how to hop some of the extra pounds off their hips to the beats of today's hottest hits -- busting their booties as well as some "super-fresh" rhymes!

The Full Lowdown: When she's not rough-riding the star-maker machinery, K mixes drinks at a watering hole popular with "Survivor" alums. The scoop: K thinks she has a good shot to cameo as a smart-alecky case of chicken pox on "Becker." VCR alert!

Celeb 612: "Mini Maude." Adorable Dakota Enriquez burst fully fledged onto the scene at the Magic Treehouse Kindergarten Year-End Talent Revue last spring. Since then, he's vamped and smoked his way from Billings to Palm Springs, and into our rapturous hearts. The Full Lowdown: Dakota on the importance of having a mentor and the challenge of staying alive in showbiz: "Jon (Celeb 2) helped me a lot with my walk; he showed me how to work my caftan without losing my falsies. He even let me open for him at a couple of big 4-H conventions.

Of course, he's working under a different name, and he's doing Jennifer Aniston (Celeb 4) now -- don't even mention Charlene Tilton (who?) when he's around (just kidding, of course. Charlene's Celeb 618). In this business, your first choices can make or break you. When you're 4 or 5, you don't necessarily know which stars are going to have the depth and staying-power to base a career on. You may not even have heard of Joan Rivers (Celeb 30) or Heather Locklear (Celeb 118). Jon was incredibly fortunate to get a second chance. And thanks to him, I don't think I'll need one." The Scoop: Good news, girls! Dakota's not gay. "I just like to chew scenery and bitch-slam doors." Right on!

Kevin Baker is a writer living in Edmonton, Canada.