"Lives" of our time 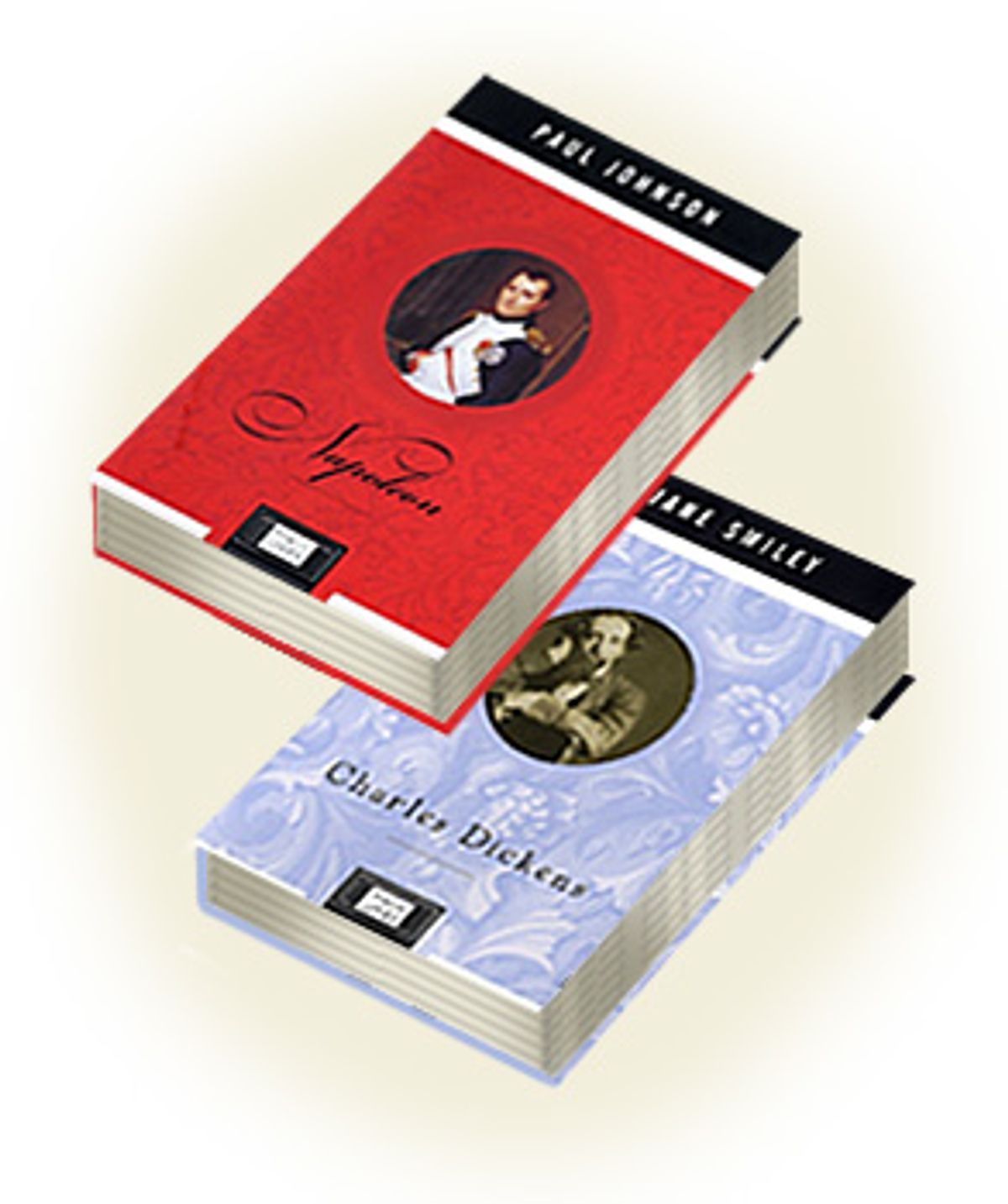 Although many will surely lament the discontinuation of the Penguin Lives series of short biographies (its demise was announced on June 26), the truth is the quality of the books has been uneven. Looking back on the list, Larry McMurtry on Crazy Horse hit the bull's-eye, Douglas Brinkley on Rosa Parks was an unexpected and overdue tribute, and Edna O'Brien on James Joyce was an economy-size supernova of revelation. Garry Wills on Saint Augustine was a disappointing misfire; Louis Auchincloss on Woodrow Wilson was totally wrongheaded (at least to this Teddy Roosevelt man).

Nigel Nicolson on Virginia Woolf, Edmund White on Proust and Marshall Frady on Martin Luther King Jr. were solid, but considering the amount of contemporary material available on these three, unnecessary. Mary Gordon on Joan of Arc managed a rare combination of reverence and relevance.

When one of these little bios clicked, when it earned a spot on your keepers shelf, you can see exactly how the formula was meant to work: The ideal "life" was written by an ardent skeptic and summed up the best of what had been written about the subject to date while illuminating the influence the life and work has had on our own time. Someone, probably Voltaire, said that history doesn't change but what we want from it does, and new biographies, particularly "little," easily accessible biographies, are as necessary to the flow of a cultural heritage as new translations of old texts.

It's fitting, I suppose, that the two examples out when the series' discontinuation was announced, Paul Johnson's "Napoleon" and Jane Smiley's "Charles Dickens," represent the best and the worst, respectively, of the Penguin Lives so far. (There are still 12 more previously assigned books to be published, but no new ones are being commissioned.) Fortunately, I read them in the right order or Smiley's book might have had me choking. I'm not sure just why in 2002 we need a new book on Dickens, unless one simply doesn't have time to dive into Fred Kaplan's formidable "Dickens: A Biography" (1988) or Peter Ackroyd's massive "Dickens" (1990). If not, there's no lack of "little" books available on virtually every area of Dickens' life and work, virtually any one of which is more substantial then Smiley's.

It's hard to imagine a less congenial match of subject and author than the effusive and ever optimistic Dickens and the only writer in the Western world who believes Harriet Beecher Stowe to be a superior novelist to Mark Twain (a bit of nuttiness I might have forgiven her for had she not hauled Stowe into her discussion of Dickens). Smiley starts right out on the defensive, telling us in the preface that Dickens was "essentially mysterious ... in part because everything that is known of him makes him all the more difficult to comprehend."

Say what? That's certainly an odd frame of mind for a biographer to take; is Smiley telling us that no amount of research can reveal the soul of a human being, or is she simply attempting to sweep away all the biographers who have come before her?

We never quite find out. "My purpose here," she writes, "is to avoid the dreary illusion of superiority that comes when critics and biographers purport to know a subject better than (or more truthfully than or more insightfully than) the subject knows himself." Now, I'm all for avoiding dreary illusions of superiority, but I'd be willing to bet there isn't a decent biographer anywhere who doesn't feel his knowledge of his subject surpasses the subject's self-knowledge. And the more correct a biographer is about this, the better the biography.

I certainly can't imagine why anyone would want to read a biography from a writer who wasn't sure he had a bead on his subject. I wish I could call Smiley's attitude modest, but the truth is that it usually comes off as simply noncommittal. (How can you expect to illuminate a life that ultimately can't be understood?)

"Charles Dickens" has virtually nothing new of interest to say on Dickens' life and continually lurches into pronouncements on the work that sound as if they were taken from a pretentious writer of Cliffs Notes. Here's a sampling:

Is Smiley's take on Dickens "modern"? Is it "relevant"? Does it correct some long-standing myth regarding the author or cast his work in a new light? Let's compare Smiley's comments above with some insights from what is generally regarded to be the greatest "little" book on Dickens:

If you think the above comments are a better reflection of your own feelings about Dickens, you are urged to seek out "Charles Dickens, The Last of the Great Men" by G.K. Chesterton, written in 1906.

Paul Johnson's "Napoleon" clocks in at just 190 pages, which may seem skimpy for the biography of a man who only half a century ago ranked as the third most written about human who ever lived, trailing only Lincoln and Jesus Christ. (I suspect Muhammad Ali has since supplanted Napoleon.) However, the book is a model of concision and lucidity.

Historians have been getting increasingly skeptical about Bonaparte over the last 100 years -- Emil Ludvig's popular 700-page 1924 biography probably swept away forever the romantic and tragic hero championed by Thomas Carlyle and William Hazlitt (the latter devoted not less than 10 volumes to a biography of Bonaparte). For Johnson, Napoleon is the quintessential hollow man of world history, an "opportunist incarnate ... He had no patriotism as such, for he had no country."

An unprincipled militarist, Napoleon had "one prodigious advantage" over his opponents: "He had no responsibility -- he could do what he pleased; and no man ever lost more armies than he did." Bonaparte "cared nothing for the lives of his soldiers," and "at bottom, despised the French."

As for the Bonaparte popular with so many historians, the one who is the inheritor of revolutionary ideals, "The Revolution was a lesson in the power of evil to replace idealism, and Bonaparte was its ideal pupil." Had his career occurred in this century, Napoleon "would have been obliged to face a war crimes tribunal, with an inevitable verdict of 'guilty' and a sentence of death or life imprisonment."

Unsparing in his historical judgment, Johnson reveals Keats and Shelley to be starry-eyed fools who "fell for the propaganda of Bonaparte's well-coached teams of portrait and history painters." And he pursues the Napoleonic legacy into the 20th century to stomp those myth-mongering intellectuals who apologized for despots: i.e., George Bernard Shaw for Stalin, Jean-Paul Sartre for Mao, Norman Mailer for Fidel Castro. Johnson's "Napoleon" isn't merely the first "little" biography you might read on the subject (which is what a great little biography should be), it might serve you well as the last.