The hypocrite in chief 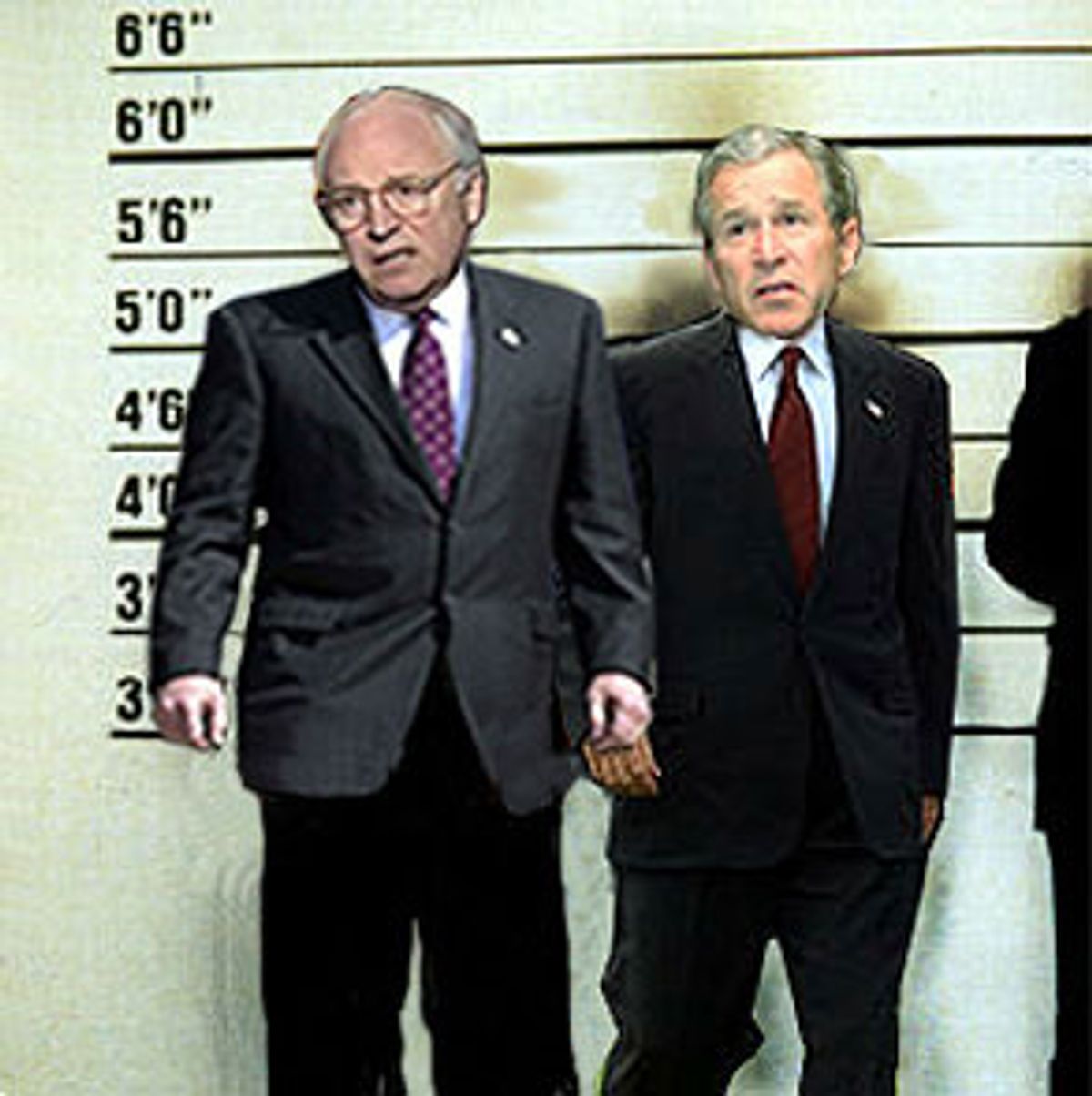 After the shock of two more multibillion-dollar corporate fraud cases last week, WorldCom and Xerox, President George W. Bush has taken up the mantle of corporate responsibility. "Corporate leaders who violate the public's trust should never be given that trust again," he told listeners to his radio address on Saturday.

But even to the most objective observer, this pitch, from this White House, is one tough sell.

Although Bush evaded most of the political fallout from the Enron debacle despite his adminstration's close ties to that company, the growing scandal of corporate irresponsibility is threatening to engulf the business-friendly White House. And with every move Bush makes to respond, his own corporate past, and that of Vice President Dick Cheney, the former Halliburton CEO, may well come back to haunt him.

Bush is planning a big address on the issue, complete with proposals for reform, for July 9. He already put forward a 10-point proposal for corporate reform back in March. But these very moves could help remind Americans of the corners Bush and Cheney cut during their days in the executive suites of corporate America.

Point No. 6 of the president's plan, for instance, says, "Corporate leaders should be required to tell the public promptly whenever they buy or sell company stock for personal gain."

And yet Bush had his own run-in with the SEC over his failure to report sales of Harken Energy stock in a timely manner when he was a member of Harken's board of directors. Bush dumped thousands of shares of Harken stock and then filed his forms with the SEC 34 weeks late.

The SEC launched an investigation into Bush's late reporting only after a story in the Wall Street Journal pointed it out, on April 4, 1991. The investigation focused on whether Bush could have known the company would post big losses in its August filing. Bush was cleared of any wrongdoing.

Similarly, when Bush calls for accountability from company executives, critics are quick to point out that the Securities and Exchange Commission is investigating charges that the Halliburton Corp. altered its accounting practices to hide more than $100 million in losses while Cheney was the company's CEO.

Bush said this weekend that "corporate officers who personally benefit from false accounting statements should lose all the money gained by their fraud." Shortly before accepting Bush's invitation to be his running mate, Cheney sold 100,000 shares of Halliburton stock for $5.1 million, according to SEC filings.

Jeff Faux, president of the Economic Policy Institute in Washington, says the crisis of confidence goes to the ideological core of the Republican Party's domestic policies. "The Republican domestic agenda rests on the assumption that less regulation is better," says Faux. "It presumes that government has got to be cut back and the market will deliver whatever you need. Now they've got to plug up this massive leak in their ideological dike."

Democrats are quick to point this out. Democratic National Committee spokesman Bill Buck said the Bush administration has been compromised on the subject of accountability: "It's hard to see how they can credibly talk about corporate responsibility. Bush and Cheney are examples of business leaders whose companies were investigated by the SEC."

In the wake of these recent scandals, some things are likely to change -- including, quite possibly, the SEC's budget. The Senate Democrats' budget proposal would increase the SEC budget by $220 million over what Bush has asked for, and the Senate is preparing to take up a new regulatory package after the July 4 recess.

"The crisis that has rocked the confidence of investors urgently requires adequate resources for the agency that oversees the functions of our capital markets," said Sen. Paul Sarbanes, D-Md., who chairs the Senate banking committee. And next week, the Senate will debate a bill, passed by that committee, which Sarbanes says "strengthens corporate accountability and auditor integrity; addresses conflicts of interest; and protects employees, pension holders, and investors against fraud and deception."

The White House has signaled a willingness to increase the SEC's budget in this new political environment. White House spokesman Jimmy Orr points out that the president has called for $20 million more for the SEC in his supplemental budget proposal pending in Congress.

But meanwhile, the Democrats are zeroing in on Cheney and the ongoing probe of Halliburton under his leadership. SEC chairman Harvey Pitt -- himself under fire by Democrats such as former vice president Al Gore, who has called for Pitt's resignation -- vowed Sunday on ABC's "This Week" that the commission would continue its investigation of Halliburton, no matter where it leads. "If anybody violates the law, we go after them," Pitt said.

That was echoed by Orr. "I would refer you to the radio address itself: No violation of the public trust will be tolerated," he said. "As the president said, the government will fully investigate and hold the guilty parties accountable."

Two former executives of Dresser Industries, an oil services company that merged with Halliburton in 1998, told the New York Times that Halliburton had instituted "aggressive accounting practices" to obscure its losses and to prevent its stock price from sliding. Halliburton's chief financial officer, Doug Foshee, told the paper that he "could not imagine that Cheney had specifically approved the change" in accounting practices.

But the DNC's Buck questioned whether the SEC should be entrusted with the Cheney investigation. Buck said it was "of serious concern that the SEC, an agency which sits under the vice president, would be called on to investigate. For the sake of investors in Halliburton and confidence in the system, there should no doubt be an independent investigation."

For months, the administration has tried to distance itself from any Enron connection. That has proven difficult for various reasons. First, there is Army secretary Thomas White, who once served as Enron's vice chairman. White failed to sell off his Enron stock until October 2001, five months after took his job with the Bush administration -- and just before the company's stock took a nosedive. White says he spoke to Enron employees 13 times during October 2001, but maintains they never discussed the company's financial problems. The FBI and the SEC are investigating the circumstances surrounding White's Enron sale, including his conversations with former colleagues just before Enron's fall.

And after Enron's collapse, much was made of Enron's PAC and its employees' political contributions -- which totaled more than $1 million for Bush's 2000 election campaign, Republican Party coffers, and Bush inauguration events -- and of former Enron CEO Kenneth Lay's role as an important Bush fundraiser. And, according to a former Enron executive under congressional investigation, an Enron lobbyist tipped off the Bush administration last August about the company's impending financial problems, months before Enron finally went bankrupt and thousands lost their retirement funds.

It's a line of attack the administration is particularly defensive about, going so far as to blame the recent corporate crashes on the Clinton era. The Washington Times reported Saturday that Pitt and Bush's top economic advisor Lawrence Lindsey "both blamed the corporate scandals that began breaking last year on the lax regulations of the 'go-go '90s,' when President Clinton was in charge."

So far, that line has been drowned out by the other side. Gore even made a rather amazing direct comparison between White House and Enron ethics. "Look at the Bush-Cheney budget plan, and tell me how is that different from the Enron profit-and-loss statement," he said Saturday in a speech to Tennessee Democrats.

Meanwhile, Democrats are trying to force Republicans to take what they believe are bad votes on corporate policy. House Democrats Richard Neal, D-Mass., and Jim Maloney, D-Conn., introduced a bill that aims to stop corporations from avoiding taxes by relocating to tax havens such as Bermuda. The bill was defeated on a party-line vote.

"The Republican leadership took sides in the fight between ordinary Americans and corrupt corporate practices, and they chose the corrupt corporations," said Rep. Charles Rangel, D-N.Y., after the vote.

It's a refrain that Democrats seem intent on repeating as often as possible. And Republicans, so far, have yet to develop an effective answer.