Here's an idea: Let's just take that same gizmo-packed alien-attack buddy-flick blockbuster from the summer of '97 ... and make it dumber! 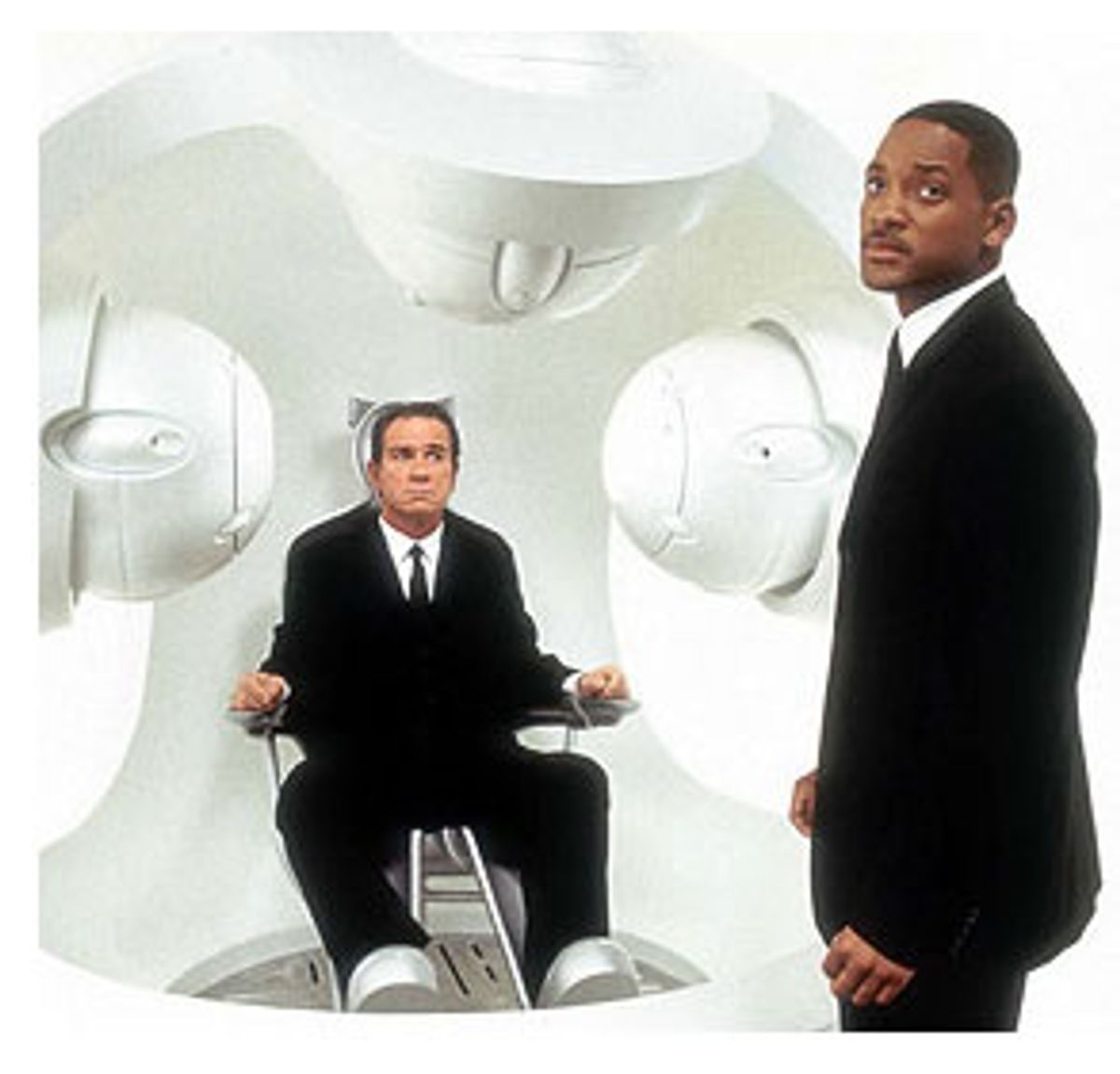 As in most of the country, summer is radiating a slow, incapacitating drudge of heat in New York City. So there's a disconnect in watching stylish Will Smith dart through Manhattan subway tunnels and investigate a downtown pizza parlor in "Men in Black II." You think, Man, he must be hot in that suit. Then you think, But it sure is cool in here.

And that's about all you think about in "Men in Black II." Because there are a few good things about this comedy-sci-fi-action-buddy flick blockbuster wannabe. But the best thing about it is that wherever you are, the air conditioning in the theater is probably working.

What happened? Barry Sonnenfeld directed the first "Addams Family" movie in 1991, and he followed it with "Addams Family Values" two years later. And together, until whenever "I Dream of Jeannie" hits the big screen, the two of those films, with their hokey gusto and their bleak, lighthearted jokes, represent the highest achievement in an entire genre of summer films: movies extracted from kitschy TV shows. (The first Addams film was also spun off into one of the greatest pinball games ever made.)

The point is that Sonnenfeld knows a thing or two about sequels, although you wouldn't necessarily guess that in "Men in Black II." Instead of inhabiting the same world of his original, the delightful 1997 "Men in Black" (the way the "Addams Family" sequel did), or inventing a new world (the "Star Wars" films), this update kitschifies it, rendering it into a silly joke.

Not that you really need the background, but here's what happened last time: Will Smith and Tommy Lee Jones saved the world.

Of course, "Men in Black" really wasn't about that. It was actually about excellent art direction -- especially the sleek, white MiB headquarters full of architect Eero Saarinen's furniture -- the floppy extraterrestrials invented by Rick Baker, the spark between rookie agent Jay (Smith) and cynical veteran Kay (Jones) and a story that zipped through New York like a rocket car and came to a skidding stop in what felt like 20 minutes flat.

God, it was fun to watch stoned.

It also had the added appeal of accidental success, like someone who stepped to the plate for a bunt and accidentally cracked a home run. (I'm going to try to make this lazy metaphor pay off in a few seconds.) It was the biggest hit of the year in part because it was so easy to like.

Here, you can feel everyone's expectations: This is going to be a blockbuster, goddammit! It's Babe Ruth promising a homer, fouling out and running the bases with a big grin on his face anyway. (OK, so maybe it wasn't worth it.)

In this "Men in Black," Will Smith is the head cop of the same top-secret interplanetary immigration service. He's commanding, cynical and, as we find out in a throwaway line that explains what happened to Linda Fiorentino, his newly minted partner at the end of the first film, he has a reputation for neuralizing -- or wiping the memories of -- his partners.

He's also lonely, just like his mentor was at the end of the first film. Lonely enough that he even overlooks protocol one night and decides not to zap a witness to a particular alien incident (Rosario Dawson). Or maybe that's just because she's cute.

Meanwhile, a squidlike alien plant thing touches down in Central Park and assumes the first form it sees: Lara Flynn Boyle as an underwear model. In no time, she scares up a two-headed myrmidon played by "Jackass" Johnny Knoxville, offs a happy pizza alien and takes over Men in Black HQ in search of the Light of Zartha -- an object that she can use to destroy the world, or something. (You can't argue with the casting: I've never considered Boyle human; her talent is contained in her meticulously plucked eyebrows, and here she acts like she swallowed a hard drive's worth of computer effects.)

In order to find what the Boyle-squid creature is looking for before she does, Zed (Rip Torn again), asks Smith to pull Jones out of retirement. He's now a commanding postmaster in Truro, Mass., with no memory of all of his service with the Men in Black. The hope is that Smith can deneuralize him, convince him to come back into service and get him to figure out whatever happened to the Light of Zartha, which he had something to do with back in the day.

Complicated? It's really not, especially since we find out three times or so what Boyle is after and why. The problem is that the plot really doesn't matter. All you want the movie to do is roll, to keep the laugh lines coming. And it never happens.

Instead, Sonnenfeld takes us on a tour of all the places we went last time -- already a problem, since discovering the outlandish behind-the-scenes-of-New York rules of the original helped the movie unfold. Now, however, the film is aware of its own kitsch factor. The design in the first film was sort of a salute to the comic-book era that spawned the film. Here, old sci-fi, like the fake "In Search Of" television show that contains a major clue, is played for its flying-saucers-on-strings hokeyness.

Only new things are cool: Jones' hot Ford LTD has been replaced with a 2003 luxury sedan. The hotel room where the thin, cigarette-smoking worm guys live is a space age bachelor pad (complete with a joke baldly ripped out of "Being John Malkovich"). It's tacky, not cool, and the kitschy-coo joke is finished off with a game of Twister. And in the most garish insult, the first floor of Men in Black headquarters has been turned into a mall full of product placements. If there are going to be "Men in Black" toys, I can tell you which fast-food joint is going to carry them.

The movie isn't a total bust. There are a couple of good New York jokes, including a play on the fact that it's nearly impossible to faze New Yorkers and a crack about what those gigantic nitrogen canisters you see on street corners are actually for. (Although I was frustrated by one New York error: There are no lockers in Grand Central Station.) Smith and Jones are always fun to watch, of course, even if you never really buy the supposed friction between them. (Would someone stop Smith's rap career? It's getting harder to apologize for it.)

But this is a sequel that even recycles jokes from the original (celebrities are actually aliens), and finds more humor in a pug singing along to "Who Let the Dogs Out" than it does in acutely timed physical comedy.

What's so off-putting about the second episode of "Men in Black" is that besides coming back with the same stars, the same peripheral goofballs, the same look and the same set (almost), the sequel comes back to the exact same theme. The clever idea in "Men in Black" was that big things came in little packages.

In the end, you just wish that Will would turn the neuralizer on you: "You liked this movie. It wasn't a waste of your time. Didn't you enjoy the air conditioning?"