Girls rule! That is, if you consider these delightful, primary-colored, hyperactive shapes and squiggles to represent human females. 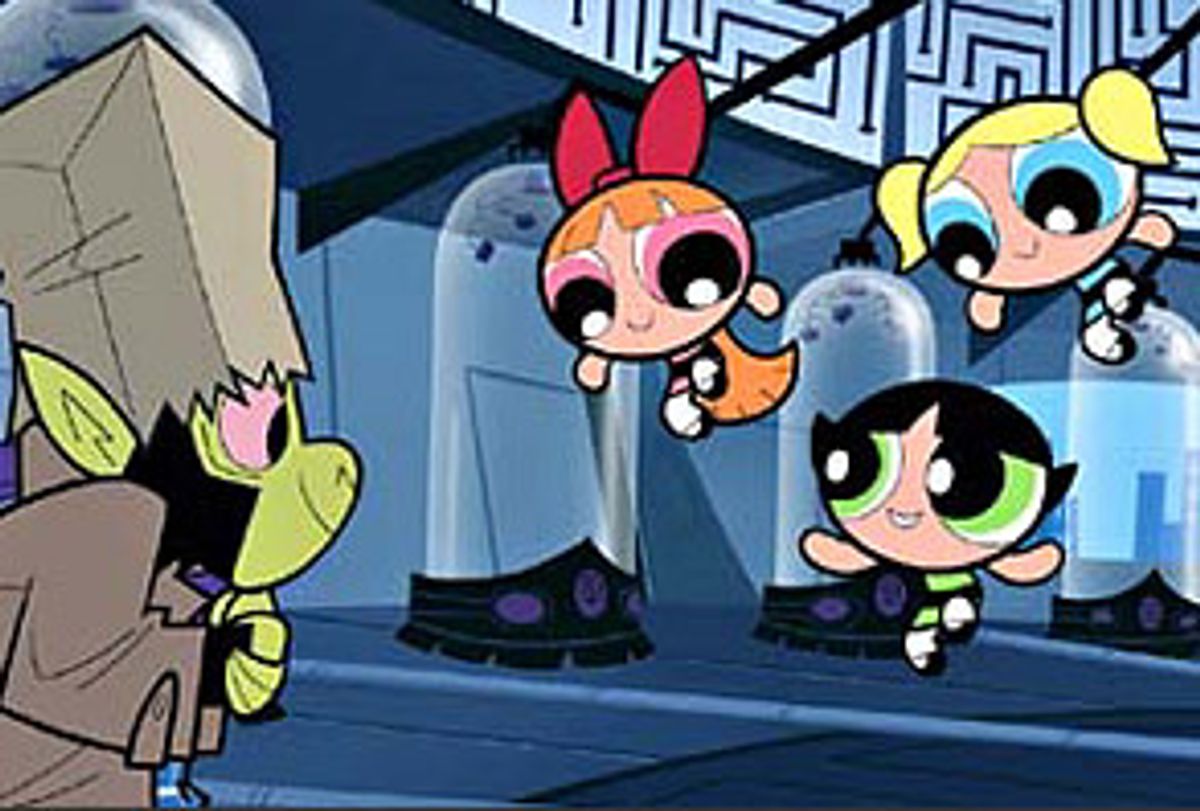 "The Powerpuff Girls Movie," the big-screen version of the hugely popular Cartoon Network show created by Craig McCracken, shows little girls they can be and do anything they want. That, allegedly, is its redeeming social value. Forget all that: Any animated movie can have an embedded message, but not many cartoons these days are such sheer delight to look at.

"The Powerpuff Girls Movie" is pure graphic candy, a cartoon that takes the visual language of '50s cocktail trays and translates it into moving pictures -- or, rather, ones that dance, fly, swoop and swing. To call "Powerpuff Girls" a movie about empowerment is to diminish its true, and more lasting, value: It's a prime example of raw visual energy hitched up to the toy rocketship of popular art.

"Powerpuff Girls" moves fast, and there's a downside to bundling such insane quantities of energy into a movie: Catch it on the wrong day and it could give you the little sister of all headaches. (Limiting your intake of coffee and sugar-coated cereal beforehand isn't a bad idea.) The movie's pace becomes far too frenetic in the last third, leaving less room for the charming, oddball fillips that dot the first hour or so.

But even when it careers out of control, "Powerpuff Girls" isn't a chore to watch. The story starts out simple and sweet: A fellow named Professor Utonium who finds himself disillusioned with the meanness and ugliness of the world throws some carefully chosen ingredients into a pot in his laboratory (sugar, spice and a dash of the mysterious chemical X) and concocts three little daughters, Bubbles, Blossom and Buttercup. All three are blessed with amazing superpowers: They can soar through the air with the speed of houseflies; after putting together a PBJ Dagwood in record time, they zip the crusts off with their laser-beam eyes.

The professor drops them off for their first day at school, trying to explain to the teacher how "special" they are. Blossom, Bubbles and Buttercup act perfectly normal in their new surroundings, until they get caught up in a game of tag that leads them on a playful rampage that, unfortunately, completely wrecks their hometown of Townsville.

The locals are outraged -- "Freaky Bug-Eyed Weirdo Girls Broke Everything" reads the newspaper headline the next day. In trying to right their unintended wrongs, they make the mistake of hooking up with an evil, turbaned monkey named Mojo Jojo, who hopes to take over Townsville himself, with the help of an army of brainwashed apes.

"Powerpuff Girls" isn't the most highly sophisticated animation, but I'd argue that its somewhat cheap-looking, jerky entertainment is part of what makes it feel like comfort food to adults raised on Hanna-Barbera and Japanese imports like "Speed Racer" and "Astro Boy." "Powerpuff Girls" is the antithesis of slick, hyperreal computer-animated features like "Shrek."

Instead of showing you every strand of hair on a character's head or every fold in her clothing, McCracken telegraphs the necessary visual information using an ingeniously blocked-out shorthand of basic shapes. The head of the professor is almost a perfect rectangle, enlivened with a thatch of dark hair and warm, friendly eyes. (Whether it's intentional or not, he's the spitting image of Robert Cummings, the star of early '60s TV sitcoms like "Love That Bob" and "Living Doll.") The heads and facial features of the Powerpuff Girls are a mad jumble of loops and circles; their limbs are chubby, rounded oblongs. Each character is distilled to his or her essence, a personality delineated in shapes and colors.

"Powerpuff Girls" speaks a completely different visual language from movies like "Shrek." It's boiled down to fewer details, but they're livelier, zingier ones. They flash by quickly; we're given just the right amount of time, measured in split seconds, to register them. We see a little doughnut shop called "Donut Thing," whose parking lot is filled with nothing but police cars. A band of evil chimps spill out of a can and link arms to form a Barrel-of-Monkeys chain. A chart showing the evolution of man begins with a stooped-over ape, proceeds to a parade of more evolved chimps and gorillas, and ends with a smiling, nerdy-looking businessguy; the legend beneath reads "Stupid ... Lame ... Better ... Almost ... Awesome!"

"Powerpuff Girls" has its share of grown-up in jokes (the mayor's assistant is a redheaded bombshell, but we never see her face -- only her hourglass bod and her cascade of flaming hair), as well as plenty of pure kid, or id, humor (a dog takes a wee-wee on the leg of a defeated evil monkey). In between, there are miniature atomic curlicues everywhere you look: We see monkeys in the zoo, each sporting a perfect notebook-spiral of a tail, and clouds in the sky that seem to have been inspired by the fluffiness of cinnamon rolls.

But then, one of the great pleasures of animation is seeing art imitating life imitating art. There is nothing in "Powerpuff Girls" that's remotely believable or realistic. It's a universe invented for our delight and pleasure and nothing else, a world made up of colors not found in nature but in a little girl's sock drawer. In "Powerpuff Girls," shapes, images and colors make up the most crucial part of the message. It's a hot-pink little movie.