My son is sometimes afraid of me; I am more afraid of him. We both wrestle demons -- monsters for him, parental anxieties for me -- that cannot be vanquished. 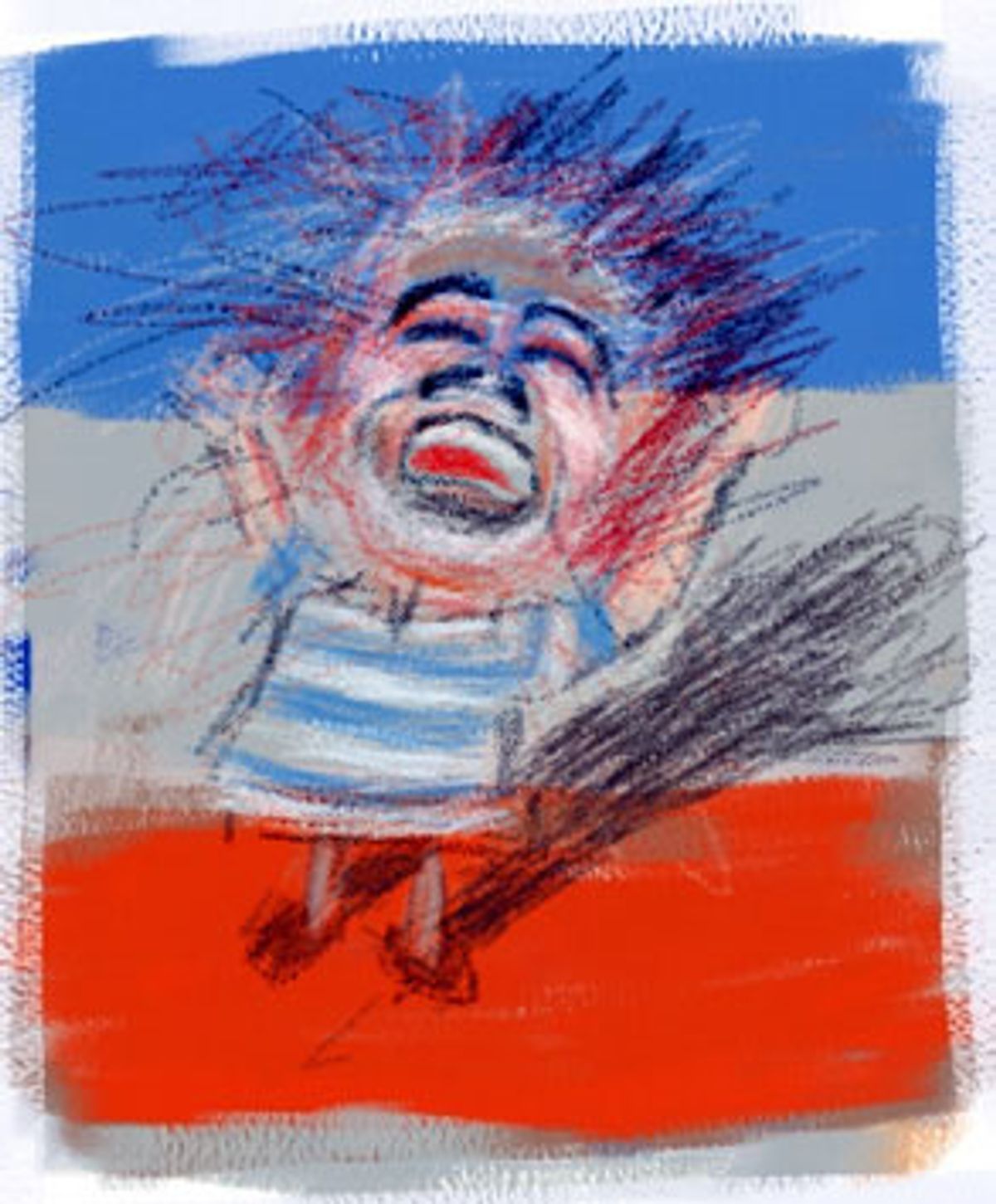 My 4-year-old son Milo is sidling along the wall, eyes lowered, shoulders hunched, his body curved into a tremulous question mark. It's wrenching to see this primal display of fear in a person so small and safe. But even as I rush to reassure him, a twinge of satisfaction disturbs my surge of pity. For I understand more intimately than I would like to exactly what my child is scared of: me.

Perhaps I have actually gotten angry this time, or maybe he is only anticipating that I will. He knows exactly which repeated offenses, what degree of defiance will force my ire, and he engages in elaborate games of brinkmanship. He trusts, too, that this is a safe form of thrill-seeking. The worst he will have to suffer after filibustering over bedtime or slipping into a rhapsody of screaming is a five-minute eternity in the solitude of his own room -- punishment in the form of catharsis and a comforting pause. But my anger also brings with it a terrible uncertainty -- the suggestion that even the grown-up world has its crannies of savagery. When a man gets angry ... well, you never know.

Milo's fear is a useful, even gratifying thing, which I try to calibrate but not eliminate. I want him to be afraid of my disapproval, but not that I might withdraw my love. I want him to sense my size and strength but not to worry about the possibility of violence. I want him to internalize my censure and gradually let the pliable stuff of self-interest harden into a conscience.

But there is a more obscure side to our relationship. The fact is, I'm scared of him far more often than he is scared of me. My puny forces of reason aren't much of a match for his onslaughts of irrational fury. With the onset of warm weather he announces imperiously that he will not wear any pair of shorts that dates from last summer. I object mildly, point out that what was baggy when he was 3 looks trim and tailored now, and that in any case, his nursery school day begins in seven minutes. Faster than you can say "Cuban Missile Crisis," his position has hardened into bedrock principle, and he is scrambling his fighter tears. His honor is at stake. I can either acquiesce or gird for a full-scale conflict. I opt for peaceful surrender and a moment later, he is smiling, witty and affectionate again, striding toward the elevator with that 4-year-old spring of his, which I wish could last his whole life. I dread losing a minute of this mood, so I choose my showdowns with care.

At night, when he is finally in bed, his milk consumed, his stories read, Milo begins to deploy his fears strategically. He is genuinely frightened of the shadows and trolls that populate his room at night, but he also knows that the words "I'm scared" have a magical effect: Parents linger a few minutes more, nudge the dimmer to brighten the room, leave the door a little more ajar, fetch another glass of water. I can easily summon from my own memories of childhood the awful visions he luxuriates in, and I almost envy them. Bedtime ghosts now seem like such a benign form of terror, and Milo senses this, I think, eager to hear my rationalizations and lame appeals to physical reality. But already he understands that creatures in his head are scary because they cannot be vanquished. "How can I stop thinking about witches?" he asks, and of course I have no answer.

No answer, that is, except the one I cannot give: "You think you're scared now? You don't know from terror. Just wait until you grow up." The past nine months have given us all the opportunity to visualize a new repertoire of horrors, and also to sharpen our tools for managing fear. We live with the knowledge that the odds of cataclysm are shortening. We understand that, when it comes to mass murder, paranoia has become obsolete. Yet we build up a crust of reasonable indifference, shrugging our shoulders at the government's vague and terrible warnings. Sept. 11 taught us the perils of waving away fear. The ensuing months have begun to show us the consequences of embracing it.

That terror and level-headedness can both be lethal is one of the themes of Schubert's classic song "Erlkvnig," a gripping setting of Goethe's poem for voice and piano, in which a father shares the saddle with his small son as their horse gallops through a forest festooned with tendrils of fog. The vocal line skips between the narrator, the boy, who sees the appalling and seductive Erl King lurking in the mist, and the father, who responds with implacable reason. The piano hammers out urgency in the headlong rhythm of the horse's hooves. By the time the riders reach their destination, the boy is dead, murdered by the grasping creature or killed by fright. The father is left with the wages of his own disbelief.

The song crystallizes several top parental anxieties -- that our children will drift beyond the reach of our protection, that our reassurances are really only vapid platitudes, that fear itself exacts an awful toll. We can, literally, worry ourselves to death. And so we devise isolation chambers for our nightmares -- fairy tales, Hollywood films and Broadway musicals in which no stroke of destiny is so terrible that it cannot be resolved into a happy ending.

A revival of Stephen Sondheim's "Into the Woods" is now playing on Broadway, and its weirdly bleak blend of fairy tale and apocalypse is relevant here. The first act cleverly weaves together a number of Grimm Brothers' stories with rather chilling good cheer. The second offers the combined sequel: Red Riding Hood has traded her cloak for the dead wolf's pelt, Cinderella wants to divorce her prince, and Jack has to face the consequences of having caused the beanstalk giant's death. The characters must now do more than just run or scream or act in desperation. They make moral choices, accept compromise and take responsibility.

But as Milo is discovering every day, learning to be responsible is a frightening process. For now, the stakes are relatively low: If he trusts himself to transport a precious toy beyond the precincts of home, he must know that there's a chance he will lose it. Likewise, I have helped bring my boy into life, and must accept that he is fragile, that love is predicated on the possibility of loss, and that to have a child is to weave into one's life another thread of fear.

Or threads, actually, since I can imagine losing him in so many different ways. I look around at the landscape of families and the odds do not seem reassuring. With ruthless certainty, statistics inform me that among the children with whom Milo shares the neighborhood sandbox, some will drift as they get older, their moral compasses calibrated to values their parents cannot comprehend. Others will forget, or reject, or resent. Some will grow troubled and depressed. I am terrified at the thought that my little boy, who even now tries to protect some tiny particles of his existence from my scrutiny, who looks for privacy in his own imaginary, whispered realm, might grow up into a person I no longer know.

As the fantasy figures of "Into the Woods" emerge from the chrysalis of fairy tale into Sondheim's adult drama, they face dangers far more cataclysmic than a ravenous wolf or a curmudgeonly stepmother. Mrs. Giant has come to avenge her husband, threatening to annihilate the whole village with a potent stomp unless it delivers up the guilty Jack. Everything resonates differently in New York these days, and I'm sure I was not the only one in the audience to reflect that like Jack, we Americans have had to face the facts of our own power. We do not deserve to live in fear of organized savagery, but we realize -- some of us, anyway -- that we helped unleash it. Surely somewhere in Milo's mind, as he cringes from my glare, he must be thinking exactly the same thing: My anger is unfair, but somehow he made it happen and now it might just crush him.

Which brings me back to "Erlkvnig." The song intimates that the child has died because the psychic and the physical have merged. But surely, in actuality, any father who galloped into his courtyard with his son's dead body thrown over the saddle would be considered a suspect. Schubert's setting, with its self-disguising voice and a melody that slips easily from role to role, allows for the Freudian reading that the Erl King and the father are really the same, and that the son displaces his father's scariness onto a misty monster. I wonder whether Milo does the same. At his age, he is susceptible to the blandishments of violence -- masked, cartoonish violence in the form of Digimon and Power Rangers, but violence nevertheless. Does he see in those bionic creations and rubber-suited defenders of civilization the deliciously frightening image of his father's wrath?

I am not yet ready to teach my son that he has more to fear from human beings than from the reptilian creatures he has conjured or that television suggests. He is scared of some real people, mostly the old and disfigured, whose appearances match his preconceptions of evil. I cannot quite bring myself to correct those prejudices, perhaps because to do so would mean to explain that in fact a threat can disguise itself behind a perfectly ordinary, amiable, unlined face, like his or -- more to the point -- like mine.

I try to quell his fears, not add to them, so of course I do not tell him what thoughts bedevil me as we board a plane. Nor do I admit to sharing his quiver of fright whenever I raise my voice or hoist him, sobbing and stubborn, with an arm around his waist. I cannot tell him that I, too, am scared of me.

Small children inhabit a primal, archaic world of wild emotions, and they can make that world seem irresistible. From time to time, Milo taps reserves of anger I hardly knew I had, intimations of the ancient savagery lurking within us all, which come out when summoned. War, emergency, terror and drugs can all release those forces. My son and I share the silent fear that he, too, with his inner ogre still so close to the surface, has the ability to release mine.