Beyond the magnificent late-night gloom (and the bombast of "My Way") you'll find Frank Sinatra's finger-poppin' classic, a joyous exploration of rhythmic invention. 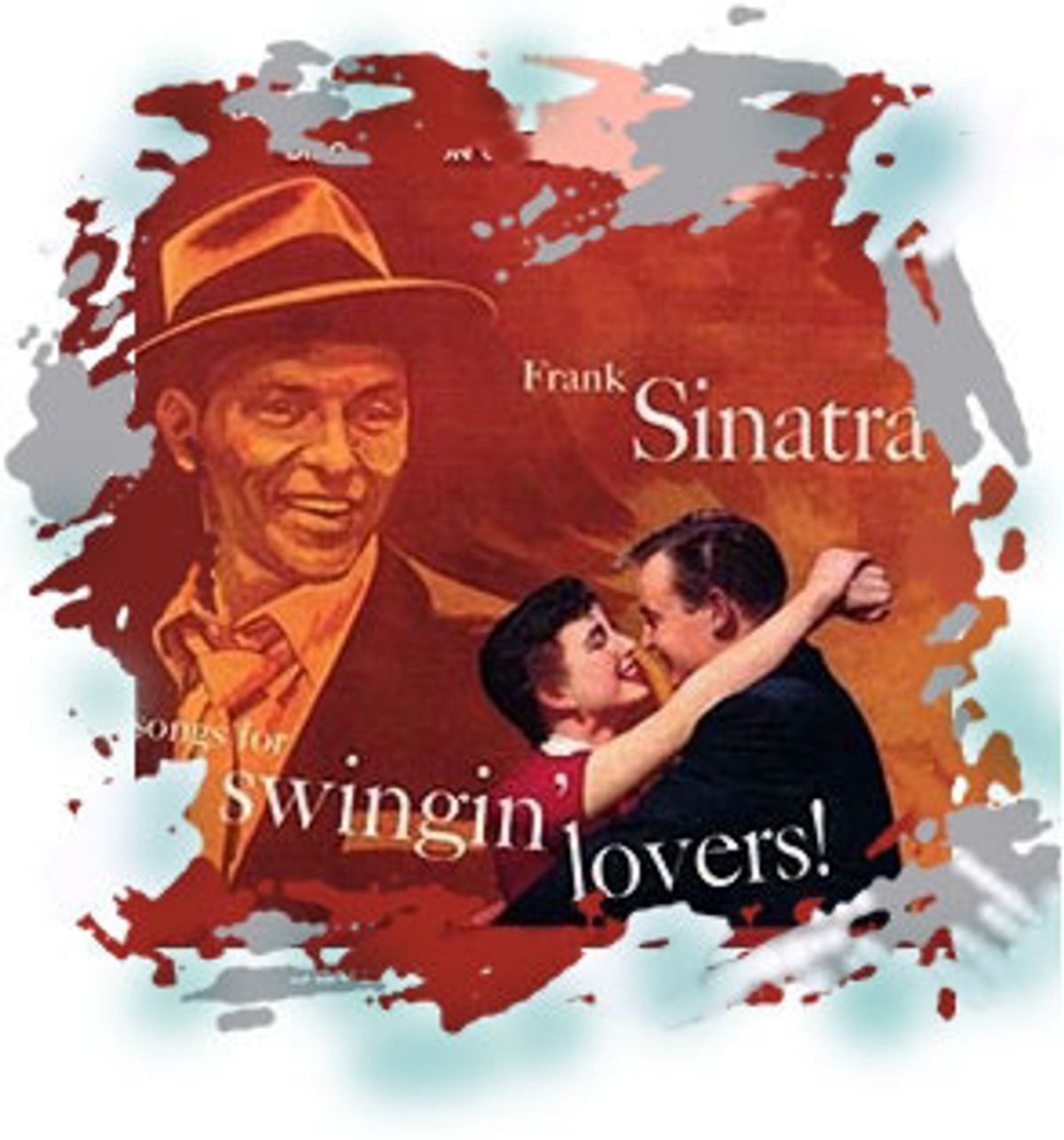 You could forget that the guy ever had a good day. After Billie Holiday, nobody in American music has ever done more to slake our taste for romantic masochism than Frank Sinatra. The album covers told part of the story. "In the Wee Small Hours," with its painting of Sinatra under a street light in the blue-green gloom of a deserted 3 a.m. city street. Or "Frank Sinatra Sings for Only the Lonely," where a garish painting depicts him as a tear-stained Pierrot. Or "No One Cares," where he sits staring into his drink at a bar while all around him folks are having a good time.

The music told the rest of the tale. Taking off from the soft, dreamy voice that the young Sinatra used on his '40s Columbia recordings, where he was surrounded by Axel Stordahl's sensitive arrangements, Sinatra's Capitol work, from 1953 to 1962 (when he left for his own label, Reprise), presented that lovelorn youth transformed into a wounded, love-struck man, deeper-voiced, older and thus with more to lose.

At their best -- the songs "In the Wee Small Hours," his mournful and deeply strange version of Bunny Berigan's "I Can't Get Started" (in which Berigan's light, easy-come-easy-go loser's panache was traded for a devastated gravity), and most of all in "Cottage for Sale," a recording so painful that there are times I can scarcely bring myself to listen to it -- Sinatra's performances went beyond luxuriant self-pity and approached luxuriant tragedy.

But leave us not forget the swing, the albums where Sinatra sloughed off romantic gloom and, with the arrangements of Nelson Riddle or Billy May, projected an upbeat winner's persona. Records like "Come Fly With Me" (or "Come Swing With Me" and "Come Dance With Me!"), "A Swingin' Affair!" "Nice 'n' Easy" and, most of all, "Songs for Swingin' Lovers!" stand in contrast to Sinatra's sustained suites of magnificent mopery.

While Sinatra's '40s Columbia sides and the downbeat Capitol albums were all about a dreamy vocal flow, these records were all about rhythm. They are supremely playful and supremely confident. Sinatra pushes to see how far he can go in breaking the songs down into rhythmic punctuation while sustaining a melodic flow. Despite everything -- the anguish of losing Ava Gardner, the attempts of then Columbia A&R chief Mitch Miller to destroy his career by saddling him with execrable novelty tunes, a career that was almost finished before the Oscar he won for "From Here to Eternity" revived it -- Sinatra sang like a guy who had never been anywhere but on top of the world. Later, that top-of-the-world confidence would be present even in the sad songs he sang, like "The Summer Wind." (Which is why it was a shock when he returned to his early dreamy delivery in the underrated and nearly unknown 1967 album "Francis Albert Sinatra and Antonio Carlos Jobim," perhaps the softest singing he ever did.)

The horror that is "My Way" (which Sarah Vowell explicated in a brilliant essay on Sinatra, written before he died) was yet to come, but in trading melody for rhythm Sinatra was trading passivity for aggression. You could say that these records hinted at the seeds of Sinatra's future arrogance, in the sense that the pleasures he sang of were taken almost for granted.

But they were taken lightly and gracefully as well. Sinatra's restlessness was the emblem of a man who disliked laziness and was therefore forever looking for new ways to amuse himself. He was renowned for not liking to do more than two takes of a song, and his phrasing is endlessly inventive. Listen to the way he played with lyrics. Could anyone else have gotten away with what he does to "Stars Fell on Alabama" (from "A Swingin' Affair!") where he changes the chorus to "And stars fractured Bam-ma! last night"?

Or the invention that's all over "Sinatra and Sextet: Live in Paris," a 1962 date. Opening with "Goody, Goody," he races ahead of the band, smearing the words together: "Soyoumetsomeonewhosetyoubackonyourheels," as if he's drawling out of the side of his mouth, until he brings the hammer down on the title -- "GOODY! GOODY!" -- turning a novelty number into a (there is no other word) swinging celebration of romantic revenge. That Paris performance highlights the main tension in Sinatra's vocals, the tension between sustained notes and long melodic lines, and seemingly tossed-off, almost spoken, phrasing. (Pete Welding, who has supplied the notes for the Capitol CD reissues, writes of the almost schizophrenic nature of Sinatra's changing style and approach.)

It's unquestionable that Sinatra set a style and an attitude for the singers who followed him. But it's nearly impossible to talk about his influence in terms of vocal technique because his style is without parallel. As it did for Miles Davis or John Coltrane when they covered standards, melody exists for Sinatra as a guide against which to work his endless variations. He plays hide-and-seek with the band, speeding ahead and daring them to keep up, or lingering without warning over words and inviting them to stretch out. On his definitive "Moonlight in Vermont" (from "Live in Paris"), Sinatra stretches out the word "evening," first taking it on a slide down the scale and then, when it comes round again, holding the first syllable until his voice breaks and he lowers himself into the rest of the word. You can hear the sextet suddenly catching itself to sustain the note behind him.

"Songs for Swingin' Lovers!" from 1956 is not just a Sinatra album I can listen to any time (something I can't say about the "sad" albums, which I reserve for brooding). To me, the album is the most perfect blend of the two sides of Sinatra's persona, the dreamer and the swinger.

A word of warning is in order for anyone who bought Sinatra on Capitol's "Nice Price" vinyl series in the '80s. As it did with the Beach Boys' offerings in the same series, Capitol deleted up to four cuts per album. The CD reissues restore the whole album and often add bonus tracks. For vinyl junkies, EMI reissued the albums intact in England in the '80s. All 21 of them traveled back with me from one particular trip to London. Essential? Sure. Along with the Beatles and Dylan's '60s work, Sinatra's Capitol albums represent the greatest sustained achievement of any pop recording artist.

Over the 15 tracks of "Songs for Swingin' Lovers," Sinatra sings sad songs and happy ones, but with the exception of "We'll Be Together Again," even the sad songs don't stay sad for very long. Part of the credit goes to Nelson Riddle's flawless arrangements: Horns provide brightness and punch without ever becoming overbearing, strings are used sparingly and kept in the background, never acquiring even a hint of schmaltz.

"It Happened in Monterey" can sum up the album's approach. Sinatra is singing of how he lost a woman in Mexico "and gave away the key to paradise." Riddle's arrangement prods him out of his reverie. The brass comes to the fore and damned if Sinatra, broken heart and all, doesn't start swinging, breaking up the lyrics into something resembling percussion: "Stars/ Steel guitars/ Lips as red as wine/ Broke/ Somebody's heart/ And I fear/ That it was mine."

It's a pattern he also follows on "Too Marvelous for Words," where he turns a vocabulary list -- "Glorious/ Glamorous/ And that old standby amorous" -- into a hipster's lexicon.

Sinatra takes songs that other artists have proffered like tattered valentines and turns them into irresistible invitations, as if he were approaching some lovely to cut loose on the dance floor. If you've heard Maurice Chevalier's oozy Gallicisms on "You Brought a New Kind of Love to Me" -- "Eef ah nahtengale, coul' seeng lak yooo" (or even if you've just heard the Marx Brothers imitating Chevalier in "Monkey Business"), what Sinatra does is damn near flabbergasting. It's not just the switched lyrics ("I'm hip that I'm the slave"), it's the charming cockiness within the phrasing.

With a muted horn providing just the right accentuation, Sinatra, in a light, higher-than-usual register, swings the melody. The downward trajectories of some lines ("They'd sing much sweeter than they do") almost take on the quality of a sly punch line. And yet, dreamy and wised-up, the performance is never less than romantic. Sinatra sings it as a courtier dressed in fedora, cufflinks and loosened tie.

Throughout the album, there are examples of those tinkered-with lyrics. On "Makin' Whoopee," Sinatra sings "A lot of shoes/ A gang of rice." (A gang of rice?) And when the album swings, as on "That Old Devil Moon," it swings hard. Like a jazzman reaching for a joint, "I've Got You Under My Skin" is so blithe in its conflation of love and addiction that the cool effrontery of it can slide right by you.

But for me, the album's masterpiece is "I Thought About You." A little-known song by Jimmy Van Heusen and Johnny Mercer, it's the sort of standard you might expect from Edward Hopper had he been a songwriter instead of a painter. The singer, separated from the woman he loves, is on a night train, peeking out the shade at the moonlit little towns that slide by his window. Each sight, recounted in language as spare as a line drawing, nonetheless takes on the richness of a painted canvas. It's the ordinary transformed into a nighttime dreamscape, lighting a low steady flame in the singer who longs to belong somewhere -- in the arms of the woman he is leaving behind, or in one of the houses whose lit windows he can see from the train. It's Sinatra's version of the ineffable passage near the end of F. Scott Fitzgerald's "The Great Gatsby," where the narrator, Nick Carraway, recounts his college Christmas trips home to the Midwest:

"When we pulled out into the winter night and the real snow, our snow, began to stretch out beside us and twinkle against the windows, and the dim lights of small Wisconsin stations moved by, a sharp wild brace came suddenly into the air. We drew in deep breaths of it as we walked back from dinner through the cold vestibules, unutterably aware of our identity with this country for one strange hour, before we melted indistinguishably into it again."

That's a perfect description for how Sinatra turned the persona of the romantic loner into an American ideal. Who wouldn't welcome heartbreak if it allowed these elegant and exquisite flights of feeling? Elsewhere on "Songs for Swingin' Lovers!" Sinatra is his own Gatsby, the ordinary American kid who entered a self-created world of luxury and style and wealth. But Gatsby without the longing, with the spring still in his step and the swing never far from his voice.