He fought duels, seduced women, crashed planes, allied with Hitler, lost a war and ran Italy into the ground, but at heart Il Duce considered himself an artist. 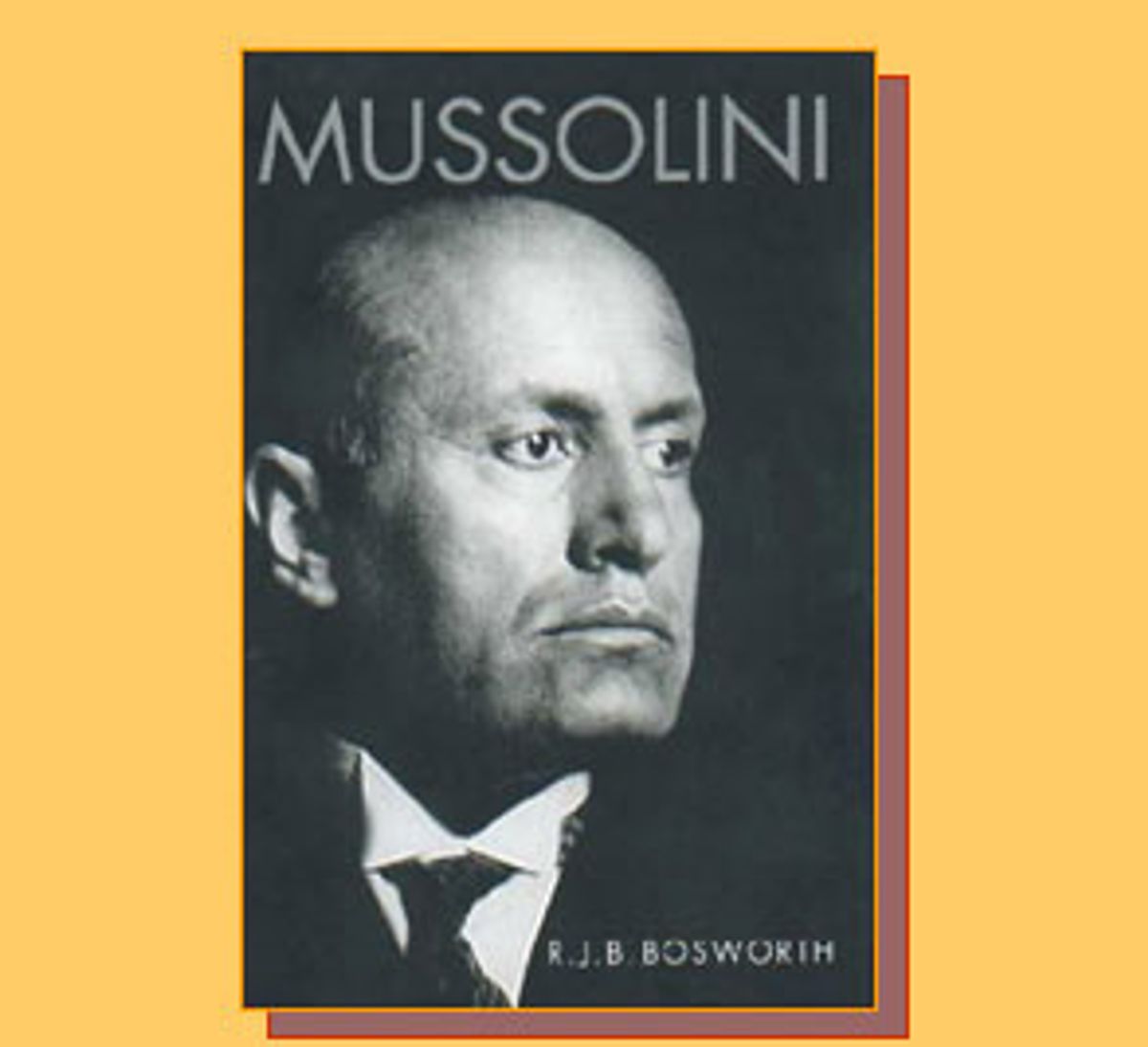 One would think that the man who introduced fascism to the world, tried to convince the swarthy inhabitants of the Italian peninsula they were Aryans, showered his African colonies with chemical weapons, fought duels, drove his convertible through Rome accompanied by an adolescent lion, survived multiple assassination attempts and a plane crash (he was the pilot), played the violin, read philosophy, wrote books and translated Italian poetry, was wounded in one world war, held power for a generation, executed his son-in-law, lost a second world war, and finally was shot and strung upside down in a public square with his mistress by an angry mob whose behavior was not necessarily unrepresentative of Italian public opinion at the time -- one would think that such a man would automatically qualify as a legitimate subject of human interest. But Oxford University Press has deemed it necessary to introduce to the press its new biography of Benito Mussolini, by Australian historian R.J.B. Bosworth, with the following note:

"Mussolini's Reputation Is Enjoying a Renaissance in Italy ... why? Tourists visit his (now guarded) tomb and his granddaughter is a major player in national politics. Few Americans know the slightest detail about his rule -- which spanned twenty years -- and much less about the man himself. Surprisingly, there are few original biographies written in English about this important figure in twentieth-century music."

It happens that I studied 20th century music fairly seriously, at the Juilliard School among other places, and to the best of my recollection Mussolini's name never came up. So I approached Bosworth's biography with even keener interest than I would have were its subject merely the man who ran Italy into the ground with the century's most corrosive and consequential ideological invention and, for his last act, forged with Germany an alliance whose exploits permanently disfigured the world.

Perhaps unsurprisingly, Bosworth's book does not live up to its publisher's claims. As a violinist, Mussolini was probably qualified to play trios with Einstein and Louis Farrakhan, and that's about the extent of his musical contribution. But even if Oxford's contention is the product of an underpaid and overcaffeinated editorial intern combined with one of those treacherous word-processing templates, it has something of the Freudian slip about it nonetheless.

The reason is that part of what makes Mussolini so weird and worth reading about is that he, like that painter of rather pretty watercolors and oils Adolf Hitler, considered himself an artist. Fresh from combat in World War I, Mussolini declared that what Italy could really use was "a man who has when needed the delicate touch of an artist and the heavy hand of a warrior." He befriended writers and painters, including (rather disastrously for the friend) Ezra Pound, and claimed that government could not function properly without art and artists. He let it be known that he started off each day reading a canto of Dante.

As with American professor of history Newt Gingrich, Mussolini's current crackpot reputation cannot alter the fact that he was a credentialed academic (however much it may diminish the academy). In times of crisis, he would retreat first to his mistresses and then to his intellectual hobbies. He published more than 44 volumes in and out of office, including the anticlerical bodice-ripper "The Cardinal's Mistress" and a critique of the Russian novel; he likened the creative rush of newspaper publishing to motherhood. In a brief period of exile before his return to power and subsequent execution, Mussolini passed some of his final idle moments translating Giosuè Carducci's "Odi Barbare" into German.

Alas, he also ruled Italy for 20 years. In Bosworth's account, the art at which Mussolini excelled during his dictatorial tenure was that of ideological bullshit. Fascism began as a notoriously slippery creed, uniting a band of agitators who were sometimes racist, sometimes anticlerical, sometimes antifeminist and sometimes antifamily. (Bosworth describes Filippo Tommaso Marinetti, one of fascism's founding fathers, as "the bold advocate of phallocracy and the end of marriage.")

The one thing that united all the fascists when they started out was a twin opposition to socialism and to Italy's liberal republican government. What united them later was Mussolini's propaganda machine, but Bosworth portrays Il Duce faking his way through policy and ideology behind an elaborate façade of omniscience and control. When it came time to lead a barely industrialized nation into the Second World War, Mussolini not only couldn't make the trains run on time, but couldn't even make the trains.

Oddly enough, the story of this bizarre and influential figure winds up being a little tedious in Bosworth's telling. Dwelling too long on the trivia of party politics and government administration, first-time biographer Bosworth seems to lose touch with the human aspect of the life as Mussolini's power waxes spectacularly and then quickly drains away. Particularly off-putting is the degree to which Bosworth assumes knowledge of 20th century European history and politics. Quick: What was the Beer Hall Putsch? The Ribbentrop-Molotov pact? What was campanilism? Who was Marshal Lyautey and why should we care? Bosworth expects you to know.

He also employs a sadistically eccentric vocabulary. It's one thing to remind readers how dim they are by using 75-million-lira words, but Prof. Bosworth keeps rapping us with his ruler by using each of the following, among other Latinate clunkers, repeatedly: lucubration, condign, irredentist, rumbustious, rusticate, pullulate. In the post-Doris Kearns Goodwin future, every history book will have too many notes, but Bosworth's decision to enter nearly 3,000 endnotes for 433 pages of text ensures that all but the most dexterous and patient of readers are going to miss out on juicy rumors and entertaining tidbits (including the speculation that the ever sickly Mussolini suffered from hepatitis C) buried there like 8-point-font needles in a textual haystack. Together with chronic stylistic intonation problems and grammatical wrong notes, these missteps suggest that our overcaffeinated intern who wrote the press release -- probably in a series of all-nighters pulled in order to catch the tail end of the recent Hitler publishing boomlet -- also edited the book.

Bosworth's larger failing, though, is in not giving us a more vivid portrait of such an intriguingly messy subject. He is self-consciously preoccupied with providing a corrective to the 6,000-page Renzo De Felice biography, produced in seven volumes between 1965 and 1997 and thought by most anti-fascists to be overly sympathetic to its subject. He carefully weighs the two sides of a succession of historiographical questions pertaining to Mussolini studies and sometimes comes down on one side or the other, but never manages to make the history or his subject cohere or come to life.

Was Mussolini a sort of artist of politics or statecraft? Was he some mad, megalomaniac revolutionary who shared his beloved Beethoven's ambition not merely to shape what he inherited but to create the future whole with his own hands? Surely Beethoven, along with Mussolini's contemporaries Picasso and Gertrude Stein, spent their creative lives cheerfully burning down everything that came before them. But granting Mussolini the identity he coveted, that of artist, of one possessed by this kind of murderous appetite for creation, gives him altogether too much credit.

The best way to sum up the Mussolini catastrophe is probably with a sexual metaphor. Il Duce was, like the more recently impeached American president, capable of inspiring the sexually charged affections of women a fraction of his age and of maintaining a busy extramarital sex life. Early on in the Mussolini administration, the international press described his foreign policy as "virile." He was muscular and athletic, dwarfing the Italian king; he fought his duels with a sword, fenced with a saber, and made it known he eschewed effete pajamas in order to sleep in his underwear. Did Il Duce wear boxers or briefs? Italy between the wars was all too eager to find out. In psychosexual terms, he was a classic top, and geographically, economically and politically, post-World War I Italy was a bottom badly in need of one.

"Italy wishes to be treated by the great nations of the world like a sister and not like a waitress," Mussolini said, parroting a nationalist slogan current at the time. But once he assumed power, Mussolini's attitude toward his country and the world turned out to be anything but fraternal. He raped his colonies and took advantage of his popularity to tear up his marriage contract (i.e., the republican constitution that made him prime minister). He is frequently caricatured as a strutting, macho prick, and why not? That's exactly what he was.

Mussolini's fall from power followed directly from his obscene courtship with Adolf Hitler and a typically male overestimation of his own potency. Is it any wonder he wound up Adolf's bottom? Is it any wonder Italy wound up getting screwed? The new wave of fascist nostalgia and revivalism that Oxford refers to is nothing more than the actions of a scarred, abandoned lover sentimentalizing the memory of her abuser and dialing his old number in the middle of the night. Expect similar results.