In third grade I wore polyester stretch bell-bottoms and wanted to be Christine Jorgensen, the world's first famous transsexual. 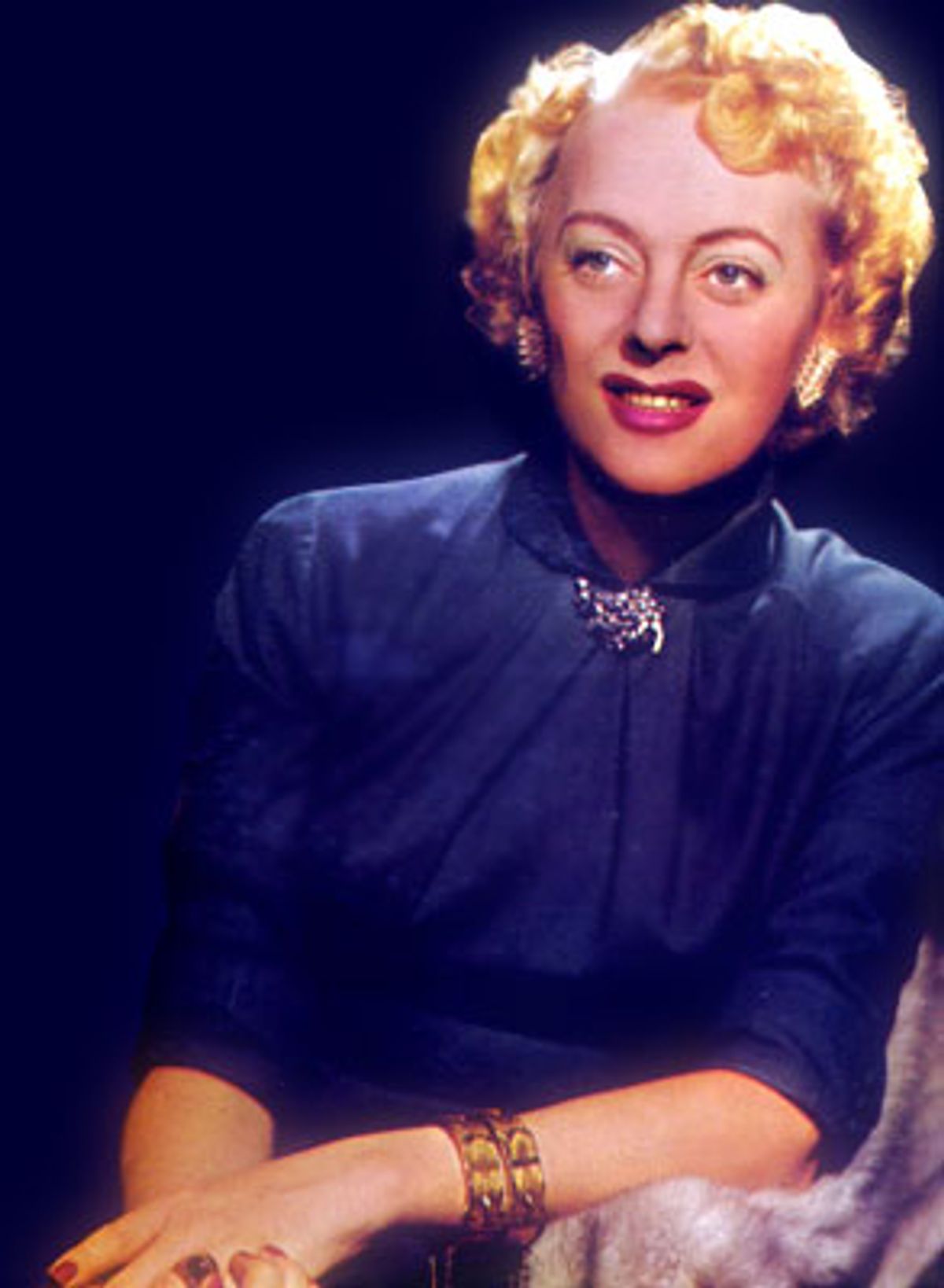 At my school in Western Massachusetts all the students had their own cubicles. This was the early '70s when everything was about emotional growth and personal space. We were allowed to decorate our cubicles in any way we saw fit. Most of the boys taped pictures of race cars or football stars to their walls. The girls favored snapshots of their cats, taken with their moms' Kodak 110 cameras.

My cubicle was a shrine to Christine. I had newspaper clippings, photographs and an article from a Danish newspaper, which I couldn't read but which had before and after anatomical line drawings.

Mrs. Rayburn leaned in for a closer look. "I'm not sure I know who she is." She must have wondered if this was some new folk singer, or perhaps the author of a popular series of children's books.

"She's not the first, but she's one of the first, and definitely the most famous, male-to-female transsexuals," I explained. "She was born George Jorgensen, and then in 1953 she flew to Denmark to have her surgery." My face radiated delight.

Mrs. Rayburn's face radiated alarm. "Do you identify with Ms. Jorgensen?" she asked.

"Oh, yes," I replied enthusiastically. "If I could be anything in the world, I would be her."

Which pretty much ended that conversation.

It wasn't so much that I wanted to be a girl. It was that I wanted to make a dramatic change in my life. My parents hated each other and I hated them. I longed for them to die in an auto accident so that I could be whisked away by uniformed officers and sent to live in a compound near a major city.

I was in the midst of an unhappy childhood and was ripe for transformation. The idea that a person could make such a dramatic change of life gave me hope. In my world there were boys and there were girls and that was it. And here's this girl who used to be a boy. My whole idea of what was possible in life expanded.

Or was it really just that I did want to be a girl?

Boys only seemed to care about trading baseball cards or riding their dirt bikes. And my feeling about baseball cards was, give me the gum and you can have the stupid cards. As for riding a dirt bike, dirt made me anxious so I preferred my mother's station wagon.

The girls always seemed much more fun. They read books and talked about what they wanted to be when they grew up. All the boys ever did was snort and then swallow it.

Eventually, I took down my articles about Christine Jorgensen and replaced them with pictures of Jesus on the cross, though I wasn't religious. I had asked my parents, "Is there a God?" And when I couldn't get a definite answer from them, when they offered no actual proof, I decided that God was like Santa Claus for adults. But I did like the image of a naked man on the cross.

I didn't think much about transsexuals again until I was 19 and working in San Francisco as a junior advertising copywriter. The receptionist's name was Liz. She was 6-foot-4, black and had Diana Ross hair -- except that she had been born a man, so her hairline was receding and she looked like Diana Ross after a particularly brutal round of chemo.

My transsexual obsession was rekindled. Liz wore brightly colored stretch pants and I couldn't help but stare at her crotch because it was an open, gaping hole that you could see quite clearly through the fabric. It didn't make any sense to me. Surely they could close up the hole better than this. Her vagina was so large, I could easily have stuck my fist in it. Maybe she needed to go back for a revision but couldn't afford it? This was probably the case. She'd probably saved all her money for the big operation and couldn't afford the finishing touches. In this way it was like buying a Jeep, stripped down until there wasn't even carpeting or an AM radio.

Liz used to eat her lunch alone, downstairs in the vending machine room. Her lunch was always the same thing: a gigantic Tupperware tub of spaghetti with meat sauce that she brought from home and an entire bag of Orville Redenbacher's Gourmet Popcorn, which she microwaved and ate one kernel at a time with her long, slim fingers.

I couldn't help but watch her gigantic Adam's apple slide up and down as she swallowed. This seemed to me to be a dead giveaway. This, and the fact that she was 6-foot-4 and balding.

I started reading every book I could find on the subject. I spent hours at night scrutinizing graphic photographs of post-surgical vaginas. I compared the clitorises created by the various doctors in America, Asia and Europe. I learned that Liz could have a tracheal shave, where her Adam's apple would be trimmed and made to appear more feminine. I learned that, indeed, many new women have to go back and have their new vaginas revised.

I wanted to show Liz the articles I found but felt I better not do this, in case it upset her that she hadn't "passed." This is something else I learned about, passing. And it's the goal of every transsexual.

A transsexual who doesn't pass alarms people. I think this is because as a culture, we are uncomfortable with sex to begin with. So when we see someone who is toying with their own sex, it makes us want to grab our penises and cross our arms in front of our breasts. It threatens us in a deep, primal place in our brain stems.

One of my favorite transsexuals of all those I read about was named Caroline Cossey, also known as Tula. Unlike many male-to-female transsexuals, Tula didn't look like a supertall depressed guy in a matronly floral dress. She looked like Cindy Crawford. With a better body.

In fact, Tula was a Bond girl and a Seagram's model before a British tabloid got hold of the fact that she was once some guy. This horrified people, probably men, who had previously engaged in fantasies of the lovely Tula only to learn she had recently been a Hal or a Greg.

When I turned 30, I briefly flirted with the notion of undergoing sexual reassignment surgery. For one thing, I was ready for a big change in my life. And for another, I was having a really difficult time meeting gay guys who didn't seem gay, yet were still caustic and could appreciate "Mary Tyler Moore" reruns. So I figured as a woman I would have a whole new pool of men to fish from.

I decided I would probably opt for self-lubricating vagioplasty. This was a more expensive vagina, because it was partially constructed from a one-inch band of mucous-secreting small intestine. The plus side of this vagina was that it was, like the name implies, self-lubricating. So I wouldn't need to give myself away and reach for the KY. On the downside, it was always self-lubricating, so you had to wear a maxi pad at all times, even at funerals.

I wouldn't make the same mistake that Liz had made: I would absolutely have the tracheal shave. I would also have the "Facial Feminization" option that was offered post-surgically by a surgeon in Los Angeles.

The problem was my feet. I wore a size 13 shoe, and while I could possibly find a surgeon who would be willing to remove my toes and bring my feet down to a more reasonable 10, I might have trouble walking.

And there was just no way I could be a woman with feet this large. I would look worse than Daryl Hannah.

And then, of course, there was the fact that, in the end, Rogain really hadn't worked for me. So I'd be forced to wear wigs. And while there were excellent-quality wigs made from the finest Japanese hair, each wig cost thousands of dollars and New York can be extremely windy in the winter.

It all seemed like so much unnecessary trouble and it wasn't like I was unhappy being a guy. I really liked being a guy. It's just I was bored with my life and wanted a change.

So here's what I did: I went to the AKC Puppy Center on Lexington Avenue and I bought a purebred Shiba Inu puppy. He was frisky, smart and adorable.

I named him Becky.