The president goes to Wall Street to lecture on bidness ethics, as questions persist about his own corporate past. 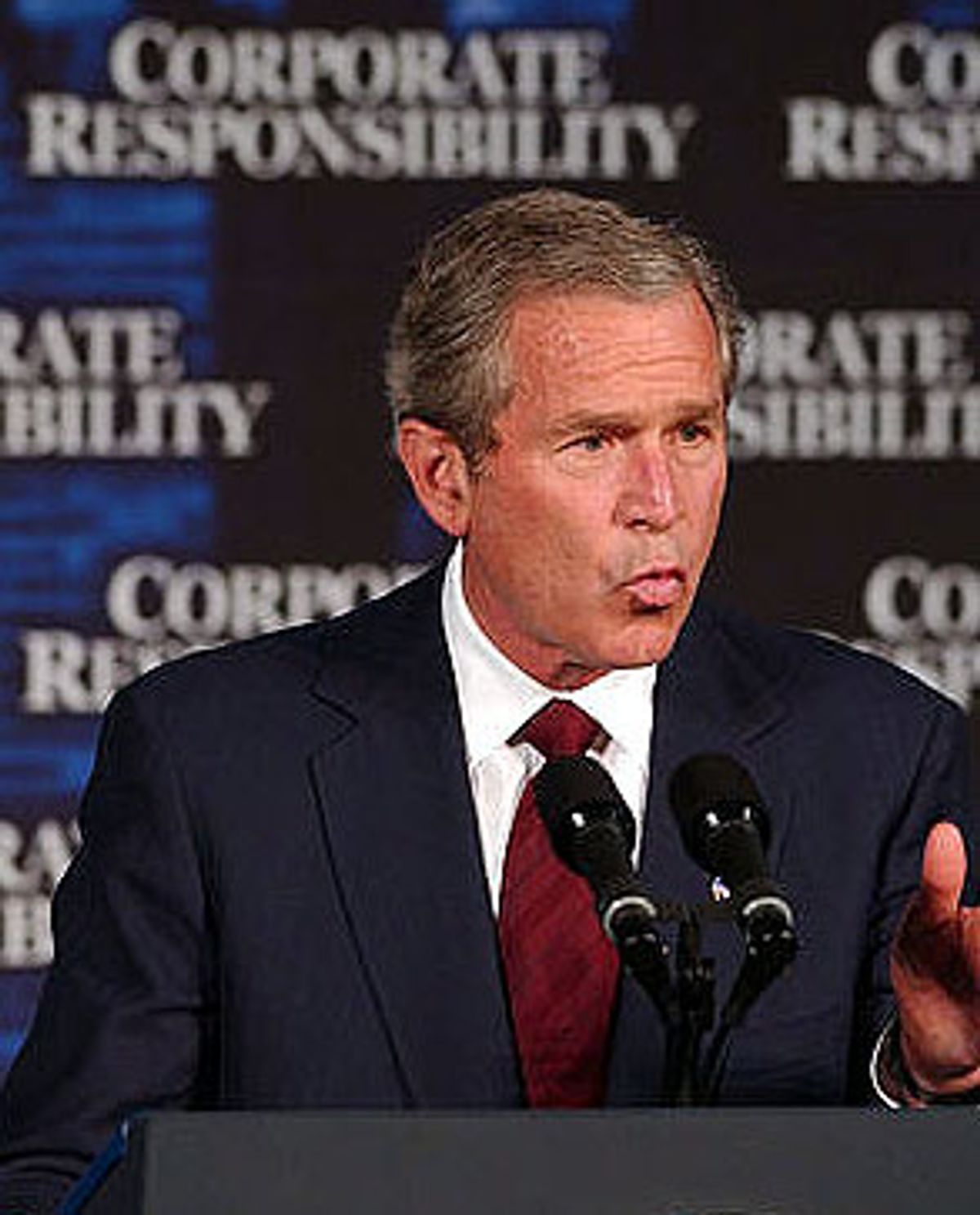 The sprawling, air-conditioned chamber in the Regent Hotel, festooned with Ionic columns and an ornate dome featuring the signs of the zodiac, once served as the New York Merchants Exchange, which, during the panic of 1857, was marched upon by thousands of unemployed New Yorkers who chanted "We want work!" In the 1860s, the U.S. Customs Service, rampant with corruption and sleaze, moved into the building. One Customs employee from that era was Herman Melville, author of not only "Moby-Dick" but the more relevant short story "Bartleby the Scrivener: A Story of Wall-street."

And though it would seem that, in the immortal words of the Scrivener, he "would prefer not to," into this chamber strode President George W. Bush Tuesday, amid the background cacophony of a whole new generation of robber-barons inflicting their distinct version of capitalism upon the public, and a renewed chorus of reporters and critics questioning the president's own credibility as a voice for reform.

Here, before a crowd of 700 dignitaries and money men, he called for a "a new ethic of personal responsibility in the business community," where, the president made it clear, the news has not been good.

"We've learned of some business leaders obstructing justice, and misleading clients, falsifying records, business executives breaching the trust and abusing power," Bush said. "We've learned of CEOs earning tens of millions of dollars in bonuses just before their companies go bankrupt, leaving employees and retirees and investors to suffer. The business pages of American newspapers should not read like a scandal sheet."

But Bush turned his modestly delivered 30-minute speech into a high-wire act, balancing the need to act (or at least, to be seen as acting) with the need to not act so rashly as to send the Dow spiraling down even further during these trying economic times. In words that were probably not well-received by observers alarmed by the various Enrons, WorldComs, Tycos, Mercks and Xeroxes, the president chose to reassure the traders just one block away, using the word "confidence" or "confident" 13 times, and praising capitalism in general. He emphasized that the bad guys were in only "some quarters of corporate America." Most businessmen, Bush insisted, "are honest" and "do right by their employees and their shareholders."

"Bold, well-considered reforms should demand integrity," Bush said, slowly and with apparent heartfelt sincerity, underlining that this would come "without stifling innovation and economic growth."

Bush outlined stiffer penalties for those who commit fraud, and suggested other proposals that he said would ensure greater transparency. This would include a group he created by executive order just a second ago, the Justice Department's Corporate Fraud Task Force, which he said would "function as a financial crimes SWAT team, overseeing the investigation of corporate abusers and bringing them to account."

The president did not describe the financial crimes SWAT team as "neat-o" or "super-cool."

The artful hand of White House speechwriter Michael Gerson was felt when Bush waxed lyrical. "All investment is an act of faith," he said, "and faith is earned by integrity. In the long run, there's no capitalism without conscience; there is no wealth without character."

The crowd included Mayor Mike Bloomberg and the ranking Democrat on the House Ways and Means committee, Rep. Charlie Rangel, D-N.Y. Reporters were cordoned off from the elites so that we couldn't ask attendees like, say, Sen. Hillary Clinton, D-N.Y, about her controversial past trading in commodities futures, or perhaps his eminence, Edward Cardinal Egan, about allegations of corruption in his own multinational.

One dignitary it wasn't too difficult to get to, Sen. Charles Schumer, D-N.Y., said, "The issue that boils people's blood is that of corporate miscreants," the individuals who collect high salaries and bonuses while selling their stock and running their corporations in the ground, screwing stockholders like this reporter who lost a bundle on WorldCom. "The president was strong about that on his new laws," Schumer said, referring to the Bush proposal to allow the SEC to go to court to freeze bonuses and extraordinary payments to executives. "To make sure that they don't try to steal the company assets on the way out the door," as a senior administration official later put it.

Bush also called on stock markets to require that the majority of directors on a company's board be truly independent, and told CEOs to publish their compensation and bonuses in prominent places instead of tucked away in proxy statements. He proposed doubling the maximum prison term for wire and mail fraud to 10 years, and called on the sentencing commission to add a new aggregating factor to mete a higher level of punishment to executives and CEOs who commit fraud. He unveiled a new proposal to ease the burden for prosecutors to charge obstruction of justice against individuals, even if the tampering took place before a proceeding is pending or a subpoena has been issued. Though previous Bush budgets cut funding for the SEC, Bush now favors an additional $100 million to its budget.

But, Schumer said, on other issues Bush was all platitudes and no proposals. "To prevent future bad guys from doing stuff, we didn't hear details," Schumer said. "When it comes to making sure this doesn't happen in the future there he was more vague."

Schumer's reaction was repeated hundreds of miles south, in Washington, where his Senate Democratic colleagues jumped on Bush's proposals as too little. "The test for the president today is not whether he shares the outrage that the workers and shareholders in these companies feel; I'm sure he does," Senate Majority Leader Tom Daschle, D-S.D., told reporters. "The question is whether he is willing to take action on that outrage and support the legislation which will actually solve the problem." He made the remarks at an event he held with House Minority Leader Rep. Dick Gephardt, D-Mo., and former WorldCom and Enron employees, where the Democratic leaders tried to steal the president's thunder by presenting their own "investor's bill of rights."

Democrats charged that the president's plan fails to set up a strong independent oversight board to audit the auditors -- favoring instead, presumably, that neat-o SWAT team. Democrats also criticized the plan for failing to restrict auditor conflicts of interest, or for not creating a new felony charged for securities fraud, or for a million other things (this is an election year, I'm sure I don't have to tell you).

"So far the administration's approach has been a familiar strategy: Use harsh rhetoric to condemn wrongdoers while delaying and watering down whatever reforms might come out of Congress," Gephardt said.

But in downtown Manhattan, the president was amid his own people -- bidnessmen -- and they seemed to take it all in with cheer and goodwill. Many of those assembled before him were affiliated with the Association for a Better New York, an organization born from the New York City financial crises of the 1970s and self-tasked with boosterism. ABNY led the "I [Heart] New York" campaign and in his introduction to the president's speech, ABNY chairman William Rudin made it clear that he [Heart] President Bush. "Mr. President, we know you will not let us down," he said.

Truth be told, by the end of the day the Dow Jones industrial average had fallen. Again. This time by 178.81 points, or 1.93 percent, to 9,096.09, even more than the 104.60 points it dropped Monday. The NASDAQ fell 24.47 points, or 1.74 percent, to 1,381.14. The dollar weakened across the board, actually sinking to its lowest level against the yen in more than nine months and coming close to parity with the euro. Perhaps Tuesday's news from the House financial services committee, where WorldCom ex-CEO Bernie Ebbers and ex-CFO Scott Sullivan continued to invoke their Fifth Amendment right against self-incrimination, was a silence that mattered far more than any speech. Especially when one considers that some WorldCom execs were blaming formerly popular auditor Arthur Andersen for the company's $4 billion in accounting irregularities.

Many of the president's prescriptions ran afoul of questions that have been raised in recent days about his tenure as a director of the Harken Energy Corporation. Given the state of corporate America, in recent days reporters have repeatedly asked about -- and Democratic rivals have attempted to exploit -- Bush's own June 22, 1990, sale of $849,000 in Harken Energy stock, just two months before the company announced a $23.2 million loss. A subsequent investigation by the Securities and Exchange Commission concluded that there wasn't enough evidence to conclude that Bush had engaged in any insider trading.

But other questions continue. Last week, White House spokesman Ari Fleischer allowed that some of the proper paperwork Bush was responsible for filing relevant to the June 1990 stock sale was filed more than eight months late.

On Sunday, Daschle told CBS: "The president would do well to ask the SEC to release the file, release it all, let everybody see just what is there. There have been some real questions about what happened and we've had different explanations."

Moreover, at a hastily arranged White House press conference on Monday afternoon, Bush seemed very much on the defensive when asked about Harken Energy's Aloha Petroleum subsidiary, the sale of which has been described as creating a very Enron-esque phantom profit in which Harken concealed large losses. The SEC later required Harken to restate its earnings without the phantom profit, which the president described as evidence that "the system worked. There was an honest difference of opinion as to how to account for a complicated transaction."

"In the corporate world," the president said -- veering somewhat from the Teddy Rooseveltian image he would attempt to project in downtown Manhattan less than a day later -- "sometimes things aren't exactly black-and-white when it comes to accounting procedures." Asked how Aloha differed from Enron's "Jedi" and "Chewco" and other shell companies, Bush said that in his case "there was no malfeance [sic] involved. This was an honest disagreement about accounting procedures. And the SEC took a good look at it and decided that the procedures used by the auditors and the accounting firm ... were not the right procedure in this particular case."

"There was no malfeance [sic], no attempt to hide anything," the president repeated.

And who could argue with that? There indeed was no malfeance. Neither was there any shamalamabingbang or dipsydoodly-pim.

By Tuesday morning, however, the president was charting a different course. Off to visit his friends in the world financial center, he, Treasury Secretary Paul O'Neill and Commerce Secretary Don Evans hopped aboard Air Force One where breakfast was sweet rolls and orange juice. Landing at JFK Airport, Bush & Co. choppered to the Midtown Manhattan Heliport, and then hopped into a limo that was part of a motorcade taking him to the Regent Wall Street Hotel.

"Will Bush Be Hit by Suicide Bankers" read a placard held by a bystander on Broad Street.

Even some on Wall Street seemed to wonder. Jack Francis, managing director and head of NASDAQ trading at UBS Warburg, told the Associated Press that "actions speak louder than words. If somebody goes to jail, maybe people will take corporate America a little more seriously."