The U.S. is spending millions crafting messages to win the hearts and minds of the Arab world. There's just one problem: We have no credibility 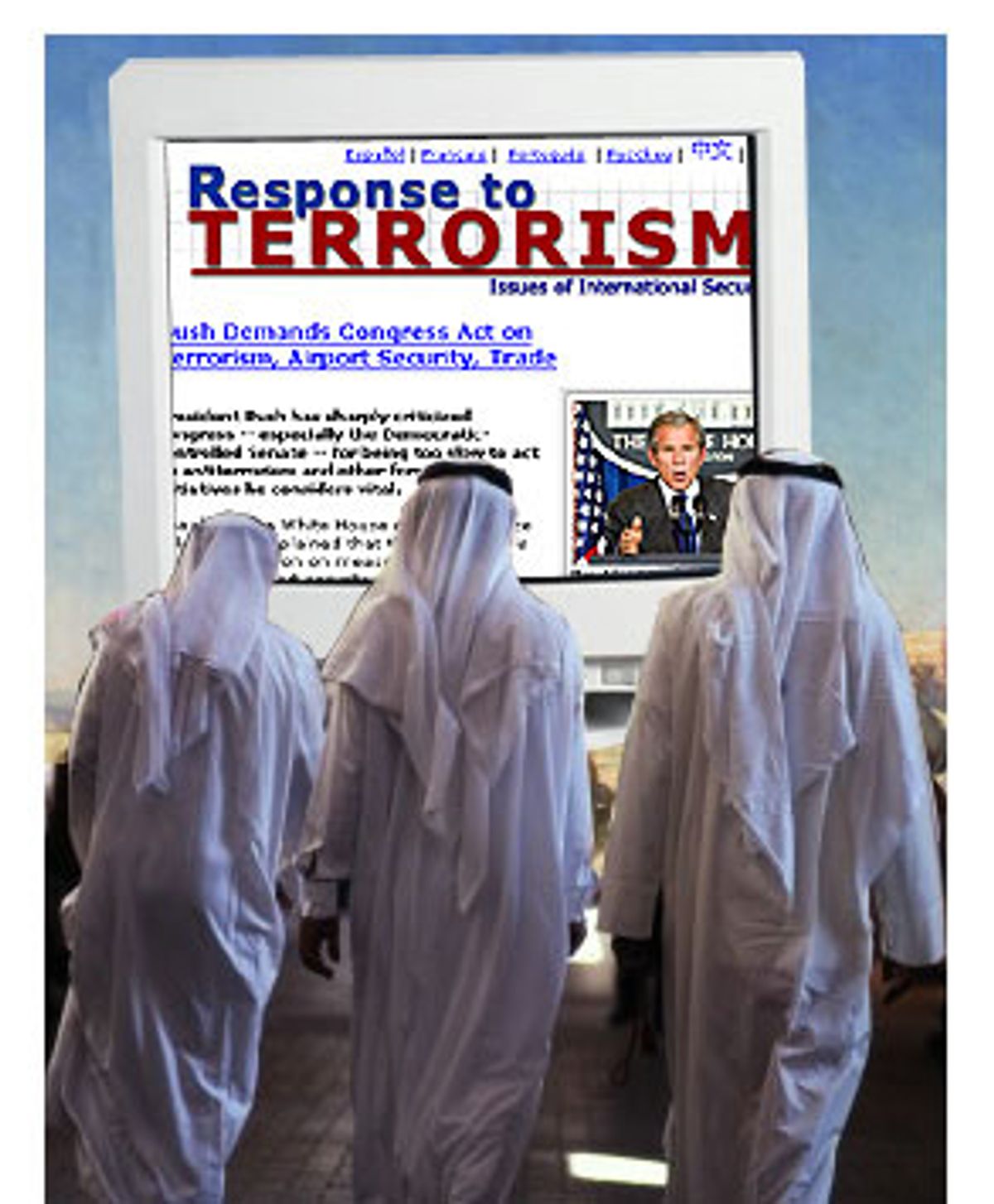 The U.S. State Department has launched a series of multimillion-dollar programs designed to improve America's image and win the hearts and minds of the Arab and Muslim world. But despite the enormous ambitions and cost, troubling questions have emerged over whether an elaborate marketing campaign can be effective in a region where mistrust of the United States is nearly universal.

The public diplomacy plan to influence grass-roots opinion in the Arab and Muslim world includes not just new cultural and academic exchanges, but also a Web site focused on Sept. 11 and terrorism, a pamphlet called the Network of Terrorism, television commercials aimed at a Muslim audience, an Arabic-language FM radio station and even, perhaps, a satellite television station for the Arab world.

New York Times columnist William Safire recently joined the debate about public diplomacy in the Islamic world, complaining that the U.S. voice is "faint" and its efforts thus far are a "flop." In his July 1 column, Safire argued that the State Department has not been making America's case loudly enough and criticized the Voice of America newsroom -- which he said "tilts pro-Arafat and anti-Sharon" -- for broadcasting interviews "with Muslim supporters of terror." His sharply worded recommendation was that America should be "knocking heads" to get "our wartime message out -- to persuade Islamic people that freedom is in their political interest, and that the path of democracy offers their best hope for a good life."

Safire's recommendations -- as well as many of the State Department's new initiatives -- reflect a profound misunderstanding of the basic problem. The overwhelming majority of Arabs and Muslims love freedom and democracy as much as we do. The problem is that from their perspective, U.S. Middle East policy is guided by neither of these two noble principles.

While some have claimed that anti-Americanism stems primarily from misinformation from local media and distorted Hollywood images of American values, the core problem results from specific U.S. foreign policies. Arabs and Muslims are profoundly angered by three policies in particular: a bias toward Israel in the Palestinian-Israeli conflict; the U.S.-led sanctions against Iraq, which harms innocent Iraqi civilians but does nothing to topple Saddam Hussein's brutal dictatorship; and Washington's consistent support for authoritarian regimes friendly to U.S. interests.

While public diplomacy can be effective, no amount of marketing, slick packaging or explaining our message loudly can solve this problem. Yet advertising is precisely what the Office of Public Diplomacy has been doing.

At a recent lecture at Georgetown University, for example, a high-ranking State Department official spoke with delight about the success of a new Web site designed to explain the tragic events of 9/11 to the Arab and Muslim World. The official, a former Yale University professor, bragged that the site had received millions of hits and had therefore been successful.

A Web site for the Arab and Muslim world? Only a small fraction of residents in these countries have telephones, let alone computers. And an even smaller fraction has access to the Internet. A snazzy Web site does nothing to reach 99 percent of Arabs and Muslims. In fact, the only region that is less connected to the Internet is sub-Saharan Africa.

The Office of Public Diplomacy has also produced 1.3 million copies of a pamphlet entitled the Network of Terrorism. The publication has been translated into 36 languages and is now the most widely disseminated document ever produced by the State Department. Staggering illiteracy rates in the Arab and Muslim world, however, doom this massive undertaking to failure. According to the CIA World Factbook, for example, illiteracy in Morocco is about 43 percent for men and 68 percent for women. The figures for Egypt are 36 percent for men and 61 percent for women; 44 percent and 71 percent in Pakistan; and 52 percent and 85 percent for Afghanistan. If people cannot read, even the best of documents is sure to be ineffective.

Another new initiative already underway is an FM Arabic language radio station. The new station, the Middle East Radio Network (MERN), is a 24-hour, seven-day-a-week service that began broadcasting in late March and is to be fully functional by late summer. Named "sawa" -- meaning "together" in Arabic -- the station is aimed at Arab listeners under 30 years old and is supposed to be more effective than the Voice of America because it will broadcast on AM and FM rather than shortwave, insuring a larger audience. Congress has already provided $35 million for MERN, and future appropriations are expected.

The most costly new initiative is a proposed satellite television station directed at the Arab world. The idea for the station, rumored to be named Al-Haqeeqa -- Arabic for "truth" -- was supported last fall by Sen. Joseph Biden, D-Del., and others. It is projected to cost close to $500 million. Biden reportedly discussed the idea with President Bush and received the president's approval, but it is still unclear where the money will come from - whether Al-Haqeeqa will be a public undertaking, private or a joint venture.

Wherever the money comes from, the new $500 million station would be an incredible waste of resources. The idea behind an American station directed at the Arab world reflects an obsession with Al-Jazeera, the highly successful Qatari-based satellite television station that gained notoriety in the U.S. for its broadcast of the Osama bin Laden videotapes.

Many in the U.S. have claimed that Al-Jazeera is anti-American and that its biased news reporting intentionally inflames passions against the United States. But Al-Jazeera has become an easy scapegoat, its power overestimated and its content grossly misrepresented. The station is not inherently anti-American. In the fall of 2001, I conducted an informal study of Al-Jazeera for WBUR, the Boston Public Radio station. I compared coverage of the war in Afghanistan on Al-Jazeera and "NBC Nightly News" and concluded that Al-Jazeera was neither pro-Taliban nor anti-American and just as professional as the American news coverage. In fact, the station has often been critical of Arab regimes and has gotten into trouble as a result.

Arabs and Muslims will undoubtedly view the new U.S.-funded radio and television stations with extreme suspicion and skepticism, as they view all government-owned media. Many already have access to Western radio channels, including the BBC and the VOA, making the new station simply redundant.

No matter what channel delivers the U.S. message, evidence suggests that the audience might not believe it. The widely reported results of the Gallup poll conducted in nine predominantly Muslim countries and released last February clearly demonstrate that Arabs and Muslims simply do not trust the U.S. government. Asked whether they found the U.S. trustworthy, the overwhelming majority of respondents said no.

Poorly conceived, quick-fix solutions are bound to fail. Yet while the primary problems are policy-related, public diplomacy - if done properly -- can be effective in influencing public opinion among Arabs and Muslims. In fairness, the Office of Public Diplomacy has done some excellent work, including increasing funding for cultural and academic exchanges and traditional diplomatic outreach efforts. Some of the most successful efforts to build bridges between the United States and the Middle East have been through the Fulbright program and the U.S. universities - the American University in Cairo and the American University in Beirut - which are now among the best academic institutions in the region.

Traditional public-diplomacy efforts work and need to be funded more generously. But in addition to increased funding for institutions and programs like these, the State Department should consider at least two new measures, which will be both highly effective and cost-efficient.

First, the U.S. should increase funding for basic and primary education in the Arab and Muslim world through literacy programs and English-language training. Education in the region is a major problem and literacy rates are abysmal in many of these countries. If one cannot read, one's exposure to a range of information is severely limited. And there is no better way of gaining the enduring gratitude of parents who do not have the resources to educate their children. U.S.-funded classrooms would be highly visible and funding education would be a highly effective form of public diplomacy, as long as the U.S. did not try to impose a curriculum on the schools.

Second, the U.S. government should establish American Studies Centers at universities in Morocco, Egypt, Jordan or Lebanon, Pakistan and Indonesia. It is tragic that not a single American Studies Center exists in Egypt, or anywhere in the entire Middle East to my knowledge. Establishing such centers would train professionals who are knowledgeable about the U.S. and American culture, history and politics. These centers would produce local experts, opinion-makers and educators who would be called upon by local media to explain the U.S. and American society -- just as Middle East experts are called upon daily in the United States. For greater credibility, the centers should be hosted at national universities and funded through the endowment model, with few or no strings attached. This would provide freedom and independence, which would, in turn, ensure credibility.

We might not agree with all of the ideas of the educators and professors at these institutions, but the fact that they will have studied in the United States and be knowledgeable about American society, politics and history would help to ensure that the information they provide to their societies will not be based on ignorance.

While American policy has the single biggest role in shaping Arab and Muslim opinion toward the U.S., public diplomacy remains important. But we must do it effectively to make the most of our resources. Choosing real public diplomacy over propaganda and delivering tangible benefits to ordinary people are sure to be more effective than even the most expensive marketing campaign.

Samer Shehata teaches Middle East and Arab politics at the Center for Contemporary Arab Studies in the School of Foreign Service at Georgetown University.