This mixture of devious thriller and deadpan black comedy lets you smirk along with its nasty little revenge plot. 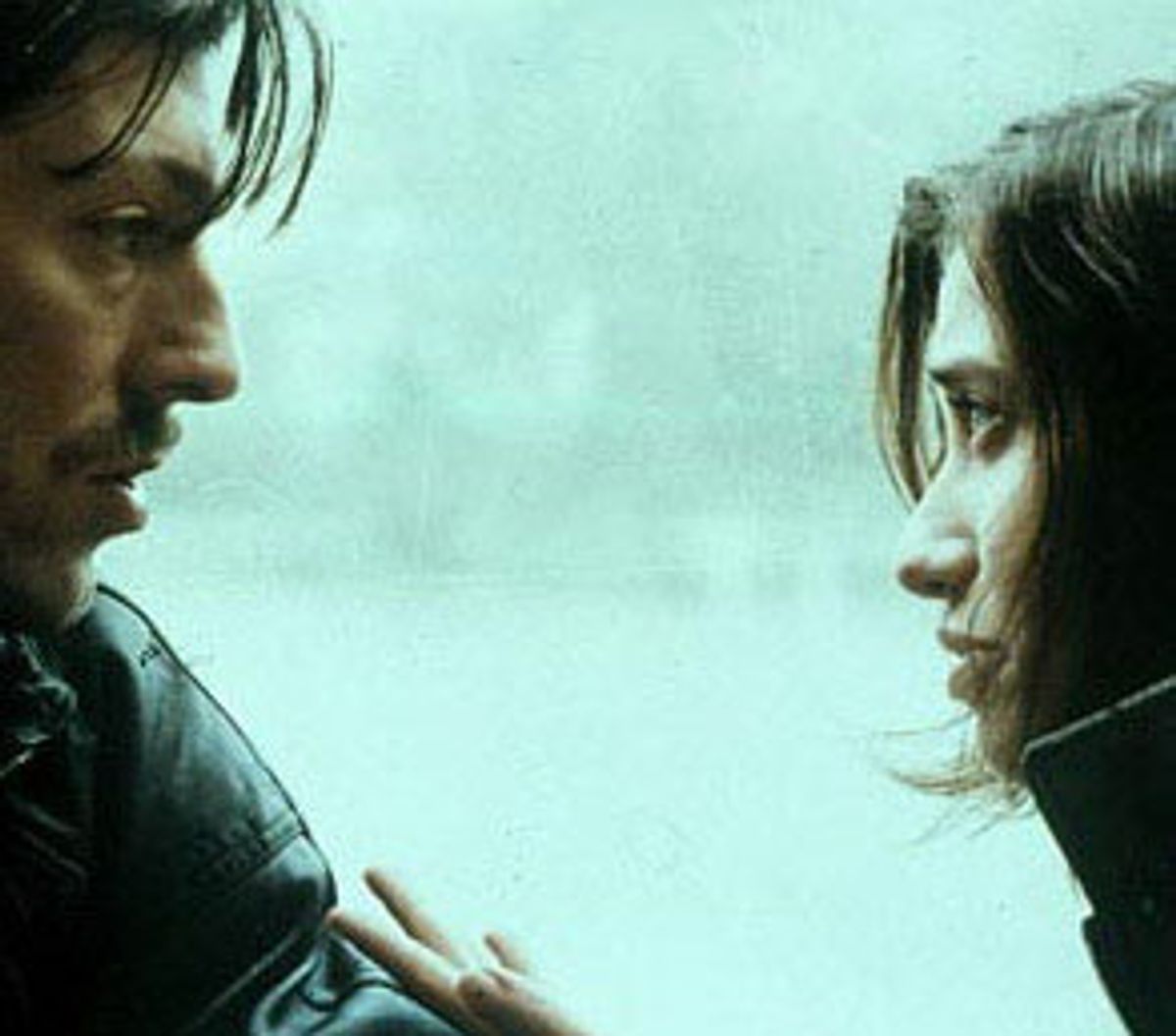 If Lorraine Bracco and Emma Thompson had somehow mated, their offspring might look a lot like Emmanuelle Devos, the star of the French thriller "Read My Lips." With her big dark eyes, Roman nose and wide, full-lipped mouth, Devos doesn't fit into any conventional notions of beauty. Her looks are a triumph of mismatched bits forming an unlikely whole. She has Bracco's Mediterranean coloring and generous features with something of Thompson's angularity and that ability of seeming to be forbidding and vulnerable at once. At times you feel like the sharp delineation of Devos' mind is manifesting in the contours of her face.

As Clara, the deaf secretary in a construction firm, Devos is equally believable as an office drudge hiding in her shapeless sweaters and, later, when she gets caught up in a larcenous scheme involving her ex-con assistant, Paul (Vincent Cassel), as a young woman inviting attention at a trendy club. Devos is too good to find her character in her wardrobe. She plays Clara's drabness from the inside, as much resentment as insecurity, the resentment of someone who knows she's smarter than the male colleagues who patronize her (or worse), and as potentially desirable as the flat-tummied women she sees out for a night on the town.

There's a remarkable sequence where Clara, alone in her apartment, takes out a pair of sexy slingbacks and tries them on, stripping and regarding her body in the mirror. There's no self-pity in the scene (or anywhere in the performance) because Devos is able to convey the calculating machinations of Clara's mind. Those shoes don't represent some Cinderella fantasy; they're the uniform of someone carefully biding her time.

"Read My Lips," which won Devos a César as best actress in France, is an ultradeadpan black comedy about giving in to devious, criminal behavior and -- to the relief of the audience -- getting away with it. It's a wholly amoral movie, but it's honestly amoral. And that's a relief for the audience. Unlike murderers, thieves invite our complicity -- especially thieves angling to get out of a soul-killing office job. The classic noirs (pictures like "The Killing" and "The Asphalt Jungle") gave us crooks we knew were doomed from the first frame. The unhappy endings of those movies served a dual purpose, toeing the Hollywood moral code of not rewarding immoral behavior and fulfilling the romantic fatalism of gangster pictures.

In "Read My Lips," on the other hand, director Jacques Audiard seems to be saying, "You know you want to see the crooks win, so don't pretend you're shocked." "Read My Lips" has won comparisons to Alfred Hitchcock, but there's none of Hitchcock's Catholic morality, none of the guilt he induced by making audiences aware of their complicity in the horrors they'd paid money to see. Audiard doesn't treat thrillers as movies we see in order to witness virtue. We go to them to be free from things like duty and responsibility and scrupulousness, to spend a few hours indulging our fantasies of getting back at the bosses who ride our backs, the friends and spouses who let us down. "Read My Lips" lets us sink down into that sardonic cynicism and enjoy a nasty smirk.

There's another way in which "Read My Lips" differentiates itself from classic noir. In noir, the woman is always the femme fatale leading the male hero to his destruction; it was in screwball comedies that the female was the male's liberation. Though "Read My Lips" couldn't in any way be described as screwball (it doesn't have the frivolousness of tone or lightness of spirit), it provides a neat switcheroo. It's Cassel's Paul who comes up with the scheme to rip off the gangster he works for, but it's Clara who keeps getting him out of scrapes and whose brains make the plan possible.

Hungry for sex, Clara (who has to listen to tales of her best friend's wild sex life) is drawn to Paul, but she's no pushover. The subtlest of manipulators, she maintains a prickly distance from him while making him more dependent on her. Soon she's even persuading him to screw over a male executive who's snatched away a project, and he goes along with it.

With its deaf heroine, "Read My Lips" may invite comparisons to Neil LaBute's "In the Company of Men." But unlike the deaf woman in that movie, Clara is no hearing-impaired Little Nell. And Audiard shows a keener, completely plausible grasp of office politics. This is a world where, driven by a survival instinct and the careful nurturing of grudges, everyone is a predator.

Paul is the sort of character we've come to think of as the classic noir patsy. An ex-con just paroled after serving two years for robbery, he bulls his way into a job as Clara's assistant. He is also heavily in debt to the gangster Marchand (Olivier Gourmet). Marchand offers him a fair deal: work as a bartender in his club until Paul has paid off his debt. That's a better break than he'd get from most loan sharks. But though Paul has adapted himself to the office job he bluffed his way into, and though Clara (partly because she's infatuated with him) is helping him along, he's too limited to go straight. So when he realizes that Marchand is planning some job with a pair of gangster brothers, he turns to Clara.

As long as she wears her hearing aids, Clara isn't deaf. Without them, she's still an ace lip reader. Paul's plan is to use that talent to cut in on Marchand's scheme. He situates Clara on the roof across from Marchand's studio with a pair of binoculars while she records the dialogue. Soon the two are working to exhaustion, spending days at their office job, and nights at the club, Paul bartending, Clara snooping.

Audiard, who wrote the screenplay with Tonino Benacquista, makes a clever use of that setup. We've gotten so used to seeing movies (thrillers and otherwise) that go off the rails of logic or introduce a device only to abandon it, that "Read My Lips" provides something like old-fashioned pleasure. (And it's a measure of the sorry state of movies that a picture can be thought of as old-fashioned simply because it manages to tell a logical story entertainingly.) The cinematographer, Mathieu Vadepied, has come up with a neat visual device to stand in for the isolation that Clara experiences when she takes out her hearing aids -- a blurry iris effect to suggest what's sliding in and out of her consciousness. It's a pity that Audiard isn't content to let the muffled sound of those moments suffice and lays Alexandre Desplat's score over them.

The director makes a few mistakes. A subplot featuring Paul's parole officer (Olivier Perrier) feels extraneous. A scene where Clara is almost raped by a guy she picks up at the club is out of place in a movie refreshingly free of moralism -- it's almost as if she's punished because she's finally enjoying herself. And Audiard fudges just what happens to Marchand. But these are piffles.

Though there are a few scenes of violence, the movie operates on a spreading and deepening sense of unease. The payoff comes in the last 20 minutes, as sustained and tense a sequence as any thriller of recent years. The pleasure of "Read My Lips" is like seeing a series of perfect black pearls clicking together to form a string. We're drawn in by the dark luster.